An ancient deity is kinder than he looks

Among a long list of folk gods in traditional Chinese mythology, Zhong Kui is worshiped as a very special deity. Known as Kui God or King of Ghosts, Zhong communicates with the three realms of heaven, earth and hell, connecting gods, people and ghosts.

With an ugly, fierce face, he is depicted as a nightmarish devil in charge of all the other ghosts in hell, while at the same time projecting a worldly person in touch with family and friends, protecting people and their homes. He grants whatever wishes people request, from wealth and health to peace.

The legend goes that Zhong was a stone sculptor, working for Nuwa, a goddess who created people and stepped out to mend the sky with five-colored rocks to save the mankind. After seven days and nights of stone smelting without rest, the sculptor, exhausted, fell into the furnace and was turned into stone himself. Moved by his sacrifice, Nuwa bestowed the title “god of justice” upon him and sent him back to the world to protect people.

In the Tang Dynasty (AD 618-907), Emperor Li Longji fell ill and dreamed of a grim-faced, heavily bearded man who seized little ghosts from the royal court and threw them into his mouth. The frightened emperor asked who the man was, and he answered: “Zhong Kui, and I’m shoveling out the evil spirits for your majesty.”

Li awoke and found his illness gone. He then invited master painter Wu Daozi (AD 680-759) to paint a portrait of Zhong and designated him “the general to expel ghosts.”

Since then, the image of Zhong was rooted in Chinese life. Ancient painters, poets and artists wrote about him and painted him. 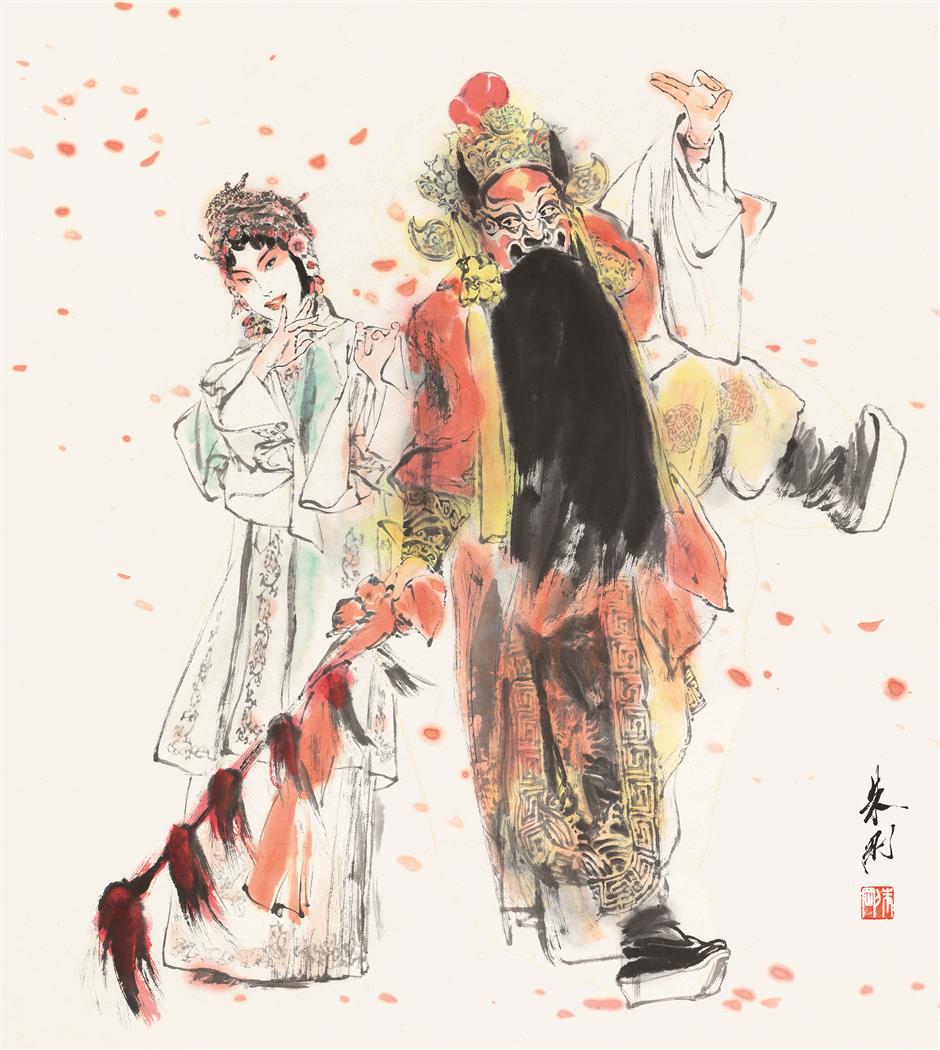 “Zhong Kui Marrying Off His Sister I” by Zhu Gang

Opera painter Zhu Gang, in a series of artwork, depicted the folk story of Zhong marrying off his sister. It was said that Zhong had a good, generous friend named Du Ping, who had sponsored him in the imperial national exam.

Despite ranking first in the test, Zhong was rejected by the emperor because of his ugly, frightening appearance. Angered and humiliated, Zhong killed himself. Du buried him in a grand funeral. After becoming the “king of ghosts in hell,” Zhong came back on Lunar New Year’s Eve and gave his sister to Du in marriage to return his friend’s kindness and generosity.

Zhu painted a series to feature this wedding theme. Inspired by an episode from Kunqu Opera, the artist shed light on a more amiable image of the deity from hell.

In one picture, Zhong, dressed in a red robe, raises his whip to spur his horse, while his sister, impeccably dressed and made up, heads for the wedding with a shy smile.

Zhu’s brush strokes turn a seemingly vicious man into more of a caring, father-like figure than an intimidating ghost.

People looking at the works can almost hear the gentle whispering between the siblings from their vivid facial expressions and gestures.

﻿
Special Reports
ADVERTISEMENT
61945
,
National treasure unearthed by tomb raiders
Artist develops a distinctive style for capturing the world of opera
An ancient deity is kinder than he looks
Chinese poetry set to song moves out into a broader realm
Zhao Puchu calligraphy show under way at Shanghai Museum
Culture of the Silk Road goes on display
Tilling and weaving a fabric of life
For precious art in poor health, the doctor is in
Metacollage: where East and West intertwine
Iconic red-brick facade reminiscent of former glory of innovative hospital in city
EXPLORE SHINE