Fashionable ladies in high hats and large skirts stroll along the rooftop terrace of the House of Roosevelt on the Bund. The day drifted back in time to retrace the steps Leopold Bloom took 100 years earlier in James Joyce’s famous novel “Ulysses.”

The 800-page book charts the adventures of Bloom, a Jewish advertising salesman, and young poet Stephen Dedalus as they wandered the streets of Dublin over the course of 18 hours, from 6am on June 16, 1904, to the early hours of the following morning.

About 80 Joyce fans in Shanghai turned out last Saturday in Edwardian attire for the Bloomsday event, starting with Bloom-style food and drinks highlighted in Joyce’s writings, such as: Gorgonzola cheese, a mustard sandwich and a glass of Guinness beer.

Those who have read “Ulysses” know how important food is in the wider context.

Joyce shows how food is part of one’s daily life, future plans and fantasies. It reflects social class, individual temperament and offers opportunities for interaction. It symbolizes sex, and its rituals are interwoven with culture, customs and values. 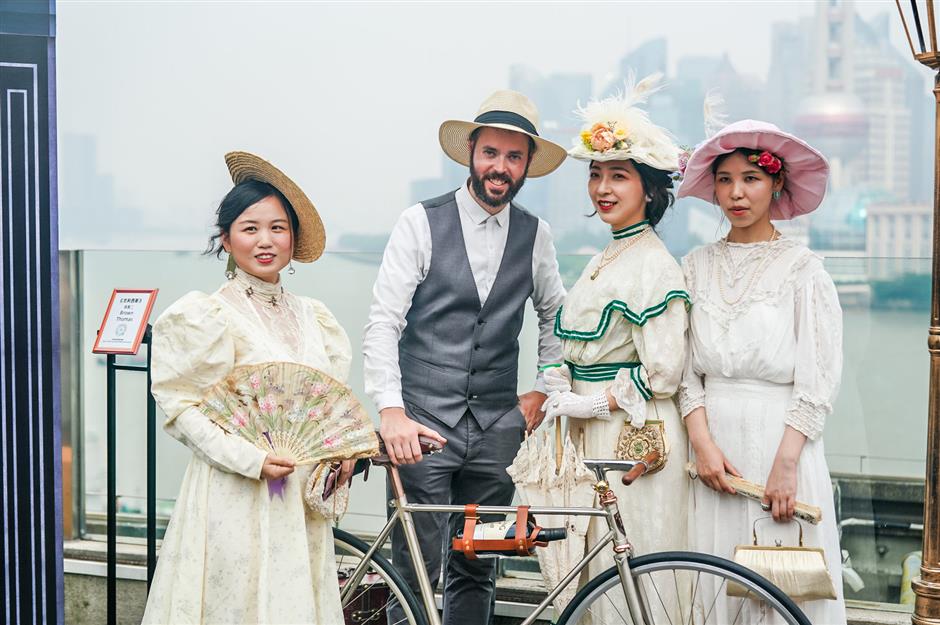 Joyce fans in Shanghai dress up in vintage Edwardian costumes for a photo with props from Joyce’s Dublin in 1904. 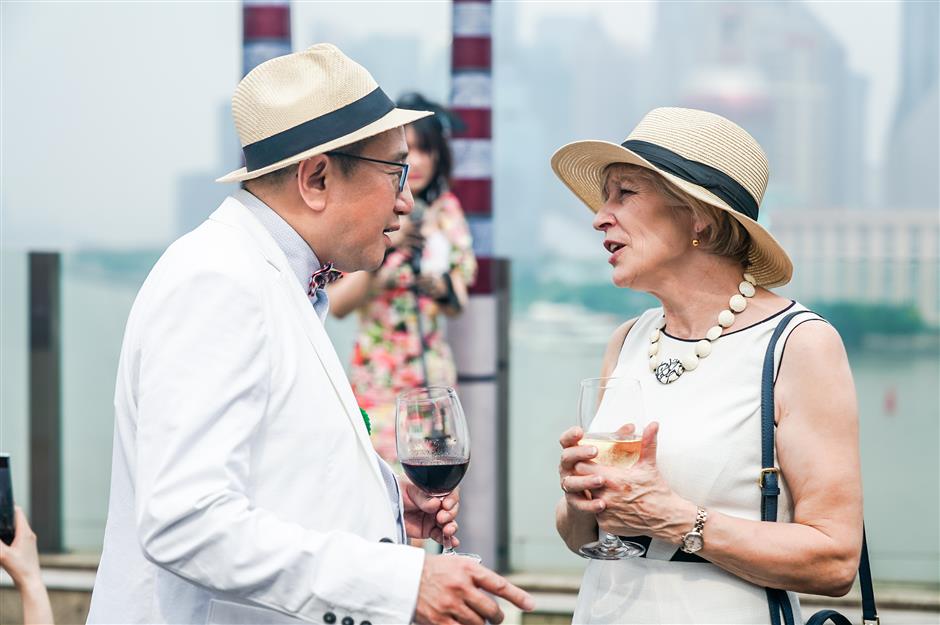 Participants at the Bloomsday event on the Bund in Shanghai

Other activities during the celebration included photo taking at key locations from the text, such as Eccles Street, Davy Byrne’s Pub, the Sweny’s Pharmacy and the Brown Thomas department store, where Bloom saw a Chinese silk dress, thinking whether he should buy one for Molly, his concert-singing wife.

Excerpts from “Ulysses” were read aloud at the minimized Sandymount Strand with the two iconic chimneys set up against a skyline of the Bund in the background.

There were online activities ongoing at the same time with some of the very best Irish writers telling their personal stories about their reading of “Ulysses.”

“While some readers may be daunted by the scale, complexity and difficulty of ‘Ulysses,’ Joyce himself wished that people from all walks of life could read his work. The best way to enjoy ‘Ulysses’ is to read it out loud, to savor the puns, humor and complexity of the text,” said the Irish Ambassador to China, Eoin O’ Leary, at the Bloomsday celebration.

Madeline Curtin has been living and teaching in Shanghai for almost six years. She is about to end her school contract and fly back to Ireland. This was her first time in Shanghai at the Bloomsday event.

“It was breathtaking to hear his magnificent words roll off the tongues of the international students that also attended the event,” Curtin said. “It made my heart richer, my soul full. Listening to the extracts of ‘Ulysses,’ I was transported back there again in the Emerald Isle.”

“I knew about James Joyce during my visit to Ireland last year,” said Guo Xin. “To me, it (the Bloomsday event) was like a time machine which brought me back to the last century with the scenes of Joyce’s Dublin in 1904.

“It also provided a chance for us to get to know more about Ireland, which has not only big names in literature but also welcoming people and nice food.” 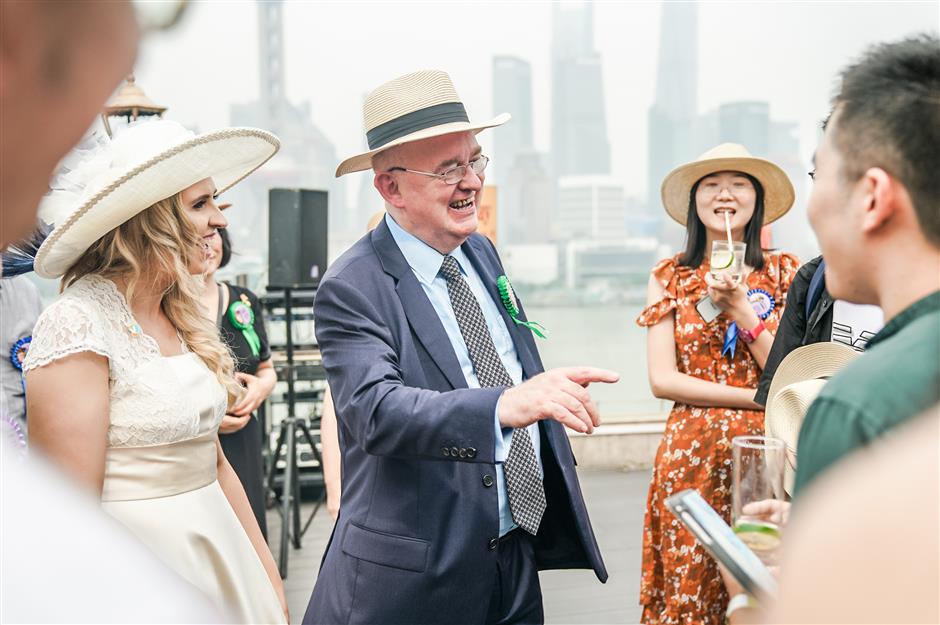 Eoin O’ Leary (center), Irish Ambassador to China, shares a light moment with the attendees of the Bloomsday event in Shanghai.

Each year, Bloomsday is celebrated around the world wherever the Irish and lovers of great literature are found.

Therese Healy, Consul General of Ireland in Shanghai, revealed the consulate started to celebrate Bloomsday with the Irish community and the many friends of Chinese students, scholars and the wider public since the establishment of the consulate 20 years ago.

“Joyce suffered a lot during his life, but he still continued. He knew his core. In challenging circumstances, he created something that was exceptional, which still gives comfort to the soul of people today,” said Healy. “We are very honored this is the only event, offline event in Shanghai. And I really appreciate people making that effort.”

Published in Paris in 1922, “Ulysses” reveals a crowd of Dublin’s middle and lower-middle classes, who must be surprised to learn that their behavior, as described by Joyce, was regarded by critics as obscene and a little bit filthy.

But this is a Dublin frozen in Joyce’s memory, just like his attitudes and beliefs. It is the day the time stood still; the day Joyce met Nora Barnacle — the decisive personal influence in his life, and fell in love. Every year there are hundreds of Bloomsday celebrations around the world. It differs from St Patrick’s Day which celebrates Irishness, or Irish tradition.

“This is more to celebrate Ireland, literally, in connection with the rest world,” said O’Leary. 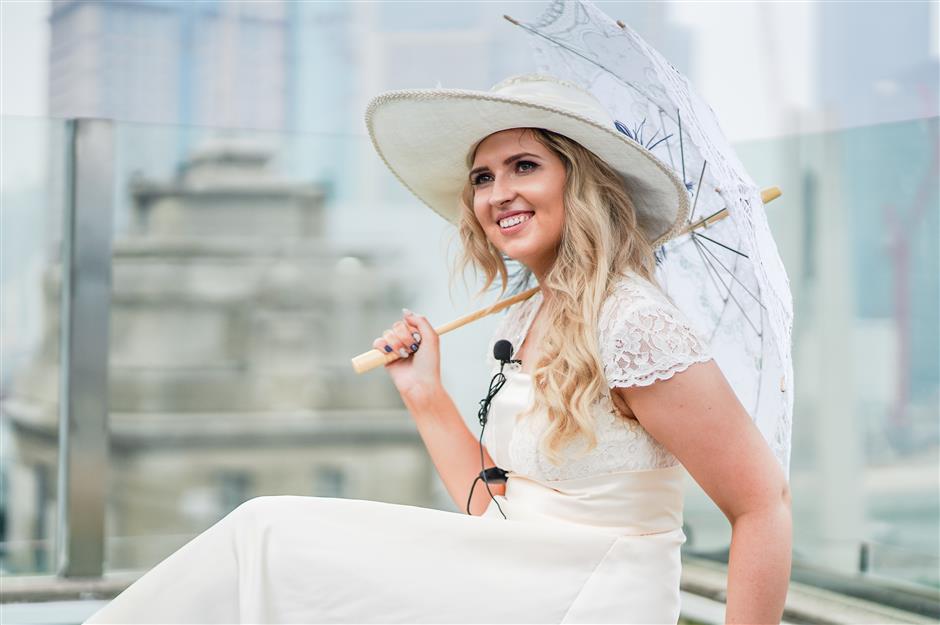