Ceremonies marking the first day of trading for new listings on the Hong Kong Stock Exchange typically involve a gong. It was a big bang indeed when Xiaomi, the world’s fourth largest smartphone maker, had its own 200-kilogram gong to celebrate its July 9 debut.

The symbolism was not lost on anyone. Xiaomi wanted to announce to the world in a big way that it had arrived on the world stage.

“We enter a new stage in our journey,” Lei Jun, Xiaomi founder and chief executive, announced proudly at the event. “We believe the potential of our global business is limited only by our imagination.”

Though Xiaomi may be a bit catch for the Hong Kong exchange, it is by no means the only mainland company seeking to list there. Of the eight smaller firms began trading since July 12, more than half of them were from the mainland.

The flavor of the season is technology. 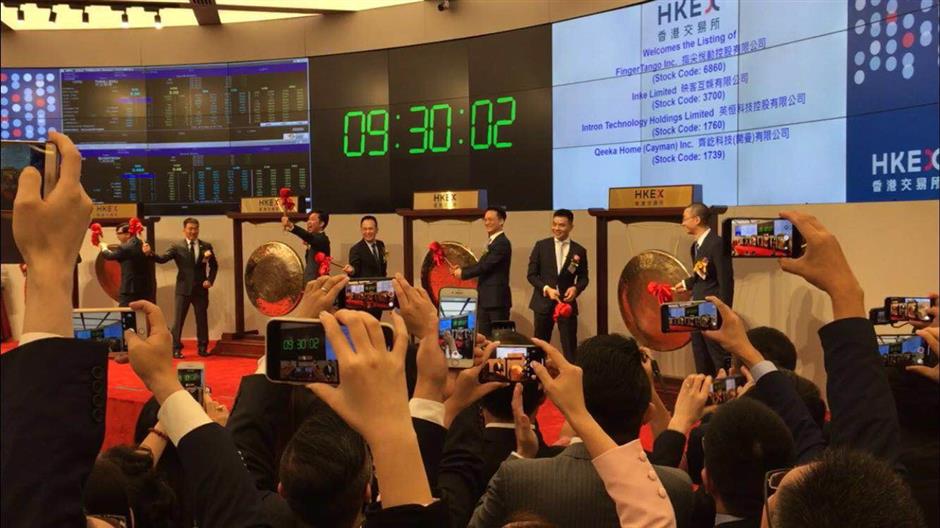 Then too, after losing out to Shanghai and New York last year in volume of IPOs, Hong Kong adopted one of its biggest rule changes in years. Effective July 1, companies that have shares of different classes of voting rights can list there. The so-called “dual-class structure” protects the influence of company founders after going public.

It all comes amid a surge in investor interest in “new economy” Chinese companies operating in hot, government-promoted sectors like information technology, healthcare, financial technology and education, according to market insiders.

Xiaomi raised US$4.7 billion in its initial public offering and was hailed as the biggest tech IPO in the world this year.

Hong Kong hosted about 100 IPOs in the first half of 2018, up 44 percent from a year earlier, setting a new record for the exchange, EY said in a report.

The lower financial thresholds for listing allow unprofitable startup companies a channel to raise funds when they are barred from doing so on mainland exchanges.

On domestic markets, about 40 percent of IPO applications were rejected in the first half of this year amid efforts to reform listing procedures. And even those who make it find themselves in a queue waiting for debuts that take an average 500 days, according to figures from EY, the China Securities Regulatory Commission and Wind.

Xiaomi’s IPO, coming only eight years after its founding, was an exciting event, said Hans Tung, managing partner of GGV Capital, which invested in the company.

Hong Kong’s new dual-class rule, first applied to the Xiaomi listing, is addressed to company founders and managers who want to maintain control over their companies even after public shareholders buy in. Companies with such share structure like Xiaomi, Alibaba and Facebook have influential founders as Lei Jun, Jack Ma and Mark Zuckerberg.

Hong Kong’s prospects as an IPO hub have been bolstered by the Guangdong-Hong Kong-Macau Greater Bay Area project and by cross-border exchange links like Shanghai-Hong Kong Stock Connect.

Listing in Hong Kong also carries the advantage of language, cultural and communication ties with the mainland, an edge that overseas exchanges lack.

In the second half, Internet giant Meituan-Dianping, online education platform Hujiang and online housing platform E-House have plans to list in Hong Kong.

ByteDance, which owns news and content platform Toutiao and mini-music video platform Douyin (Tik Tok), is also discussing a possible HK IPO that would value the firm at US$45 billion, according to media reports.

Consulting firm EY estimates businesses tied to the new economy will boost IPO activity in Hong Kong in the second half, bringing listing value to US$200 billion.

But the exchange there shouldn’t expect competitors to take the trend lying down.

The Shanghai and Shenzhen exchanges said recently that they will not expand their stock connect program with Hong Kong to include foreign firms or companies with differential voting-rights structures.

That bars Xiaomi from the stock connect system, which effectively closes company shares to most mainland investors.

Even though Hong Kong leads in numbers of IPOs, the Shanghai market is still the world’s third-largest regional bourse in terms of IPO fundraising, followed by the New York Stock Exchange and Nasdaq. Hong Kong ranked fifth, just ahead of the Shenzhen exchange on the mainland, according to EY.

China, in its reform program for financial markets, announced details of a pilot program for Chinese depositary receipts in April.

Depositary receipts are surrogate securities that allow domestic investors in one country to hold the shares of overseas companies. The new mechanism aims to encourage Chinese technology giants listed overseas to sell CDRs on the mainland to domestic investors.

Targeted in the new program are companies operating in sectors such as the Internet, big data, cloud computing, artificial intelligence, software and integrated circuits, high-end equipment manufacturing and bio-medicine.

Foreign-listed Chinese companies seeking the participate in the new program must have market value of no less than 200 billion yuan (US$31.88 billion). That paved the way for overseas-listed technology giants such as Alibaba, JD.com, Tencent, Baidu and NetEase to issue domestic CDRs.

Xiaomi was the first to submit an application for the program in tandem with its Hong Kong listing, but the company later said it was postponing the CDR component.

The reforms and new initiatives on mainland exchanges are transforming the A share markets in Shanghai and Shenzhen from high intensity to high quality, said Sun Jin, Assurance Partner of PwC China.

And loud gongs don’t necessarily ring in success. Xiaomi shares slumped on their first day of trading. On Friday, they closed at HK$19.88, compared with the offer price of HK$17.