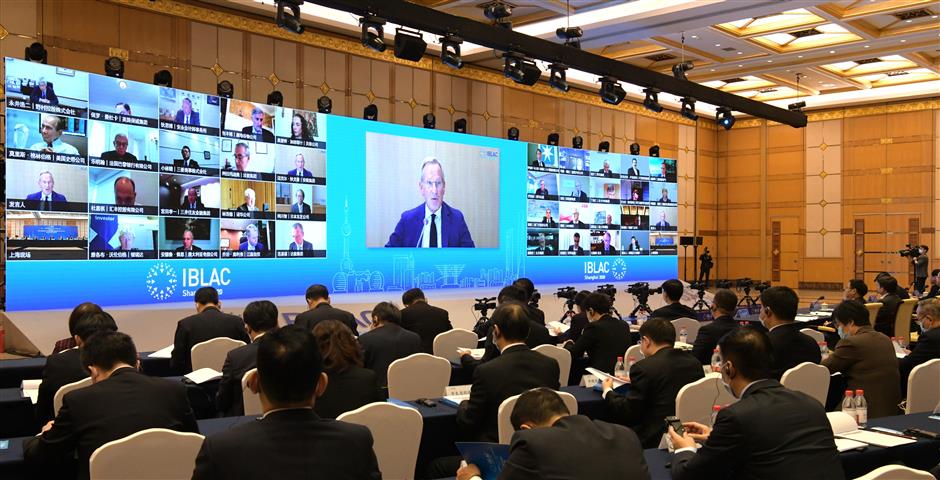 Shanghai government officials and top executives of major multinational companies attend the 32rd annual meeting of the International Business Leaders’ Advisory Council for the Mayor of Shanghai at a video conference on Sunday.

Top executives of major multinational companies pledged a helping hand for Shanghai to further promote its position, and to enhance high-quality development, at the 32nd annual meeting of the International Business Leaders’ Advisory Council for the Mayor of Shanghai on Sunday.

Shanghai Mayor Gong Zheng attended the video conference and exchanged ideas with business leaders on how to further strengthen the  city's risk response system and make it more competitive.

IBLAC members brought many proposals  to usher in a new chapter of development at a time of uncertainty.

The annual meeting was initiated in 1989 by then Shanghai Mayor Zhu Rongji and has since served as a platform for business executives to put forward advice for the city on how to prosper, and for the city's leaders to show determination and welcoming attitudes for the latest input from all sides.

Shanghai is regarded as a city well poised to innovate ways of consumption and to upgrade its industrial structure, thus inspiring the people of Shanghai and the world.

This year the plenary session focused on Shanghai's strides toward further opening up, and more initiatives to drive high-quality development.

The three sessions focused on topics including "the Opportunities and Challenges for Shanghai’s Development Brought about by Changes in the International Situation," "Upgrading of Shanghai’s Industrial Structure in Combination with the Development of Key Areas" and "Enhancing Resilience of Shanghai."

In 2018 Shanghai released an official, detailed master plan for building itself into a "global city of excellence” by 2035.

The city will explore new growth models that are suitable for sustainable development in densely populated megacities, and will take measures to control construction and population growth, protect the environment as well as create a safe and friendly metropolis for people to reside.

The three sub-goals under the overall target include transforming Shanghai into an innovative, humanistic and eco-friendly metropolis.

The city has since made progress in terms of financial opening-up, business environment improvement and ecological planning.

Shanghai proves to be a place that all businesses around the world are interested in, and continue to invest.

Global Chairman and CEO of EY Carmine Di Sibio also commended Shanghai's progress in terms of financial reform in recent years and urban management efforts in the wake of the pandemic.

The reform of initial public offering schemes and the new STAR Market has helped companies list and grow in China, and the push for listed companies' information disclosure and transparency is also helpful in attracting more foreign capital.

"Shanghai proves to be a place that all businesses around the world are interested in, and continue to invest," he said.

EY said it viewed China as a very important part of its global business and will continue to hire and grow its presence to serve clients. It has plans to hire across all service sectors.

"Our Chinese operations are becoming increasingly technology-oriented, and we will continue to invest in our digital platform for strategy consulting and transactions services," he said.

STAR Market and IPO schemes have been breakthroughs, and have brought the city more business confidence in general, he added.

Improving public health and solving health-care challenges have been of major interest.

“To further invigorate Shanghai’s health-care system, part of the drug procurement savings could be reinvested in innovation and reform of hospital operations, for instance, by improving IT infrastructure, training of health-care professionals and quality of care," he suggested.

He also advised the establishment of a comprehensive rare disease framework that includes a pilot for special multi-channel funding to tackle the relatively low availability of treatments for rare disease patients.

Promoting high-quality products will also help the city upgrade industry structure with a new role as a consumption hub.

Shanghai is already advanced on many aspects including retail, consumer, modernity and new services, said Jean-Paul Agon, chairman and CEO at L’Oréal.

L’Oréal keeps inventing and developing new technologies in China to use in the rest of the world, and apart from offering high-quality products to cater for consumer demand, its next steps will include more innovation on the digital side.

"Promoting high-quality products will also help the city upgrade industry structure with a new role as a consumption hub," he said.

He expects China's market to keep growing much faster than the global level, while global sales would return to positive growth in the second half this year.

"We also aim to work in an open manner with local players and aim to create positive ecosystems that are beneficiary for the city, for industry players and for China in general," he noted.

Sales of L’Oréal in the first half dropped 11.7 per cent but its China sales surged 17.5 percent thanks to new product launches bringing an encouraging recovery in beauty products.

Shanghai shall reconfirm its status as a model for international openness through initiatives like the China International Import Expo, and should also facilitate the sustainable growth of population through city planning and expansion of green infrastructure.

She pointed out four trends including demographics, automation, globalization, and the changing role of governments, would transform the global economy. COVID-19 would accelerate all four trends.

"Shanghai shall reconfirm its status as a model for international openness through initiatives like the China International Import Expo, and should also facilitate the sustainable growth of population through city planning and expansion of green infrastructure," she added.

She proposed Shanghai make smart investments in automation and AI, while taking an active role in re-skilling and up-skilling workers. The city is also advised to use smart tax policies to stimulate consumption and counterbalance growing inequality.

Emmanuel Faber, chairman and CEO of Danone, also pledged to extend full support to the Shanghai government in its effort to upgrade the public health emergency system. Openness and collaboration are essential in the whole process, considering the city's high population density and cross-regional and trans-national mobility.

He suggests the adoption of a "Prevention First" approach is essential for curbing future crises. Big data and leading-edge technology should be introduced to strengthen decision making and crisis management.

“Shanghai has a large aging population," he said. "Our daily medical infrastructure can be fine-tuned to pay more attention to the risks affecting older citizens."