As China has achieved fast economic development through its reform and opening-up, it has also been exploring ways to improve its higher education.

Jeffrey S. Lehman, vice chancellor of New York University Shanghai, told a recent forum that Sino-foreign universities were an effective way to achieve China’s goals of improving higher education and nurturing innovation and cosmopolitan multicultural effectiveness in the next generation of students.

From President Xi Jinping’s work report to the 19th Party Congress last October, he has perceived China’s expectation for “higher education to contribute strategically to the next stage of China’s national development.”

He also drew from the report: “the most important elements that bear directly on our work as universities: promoting decentralized, independent experimentation; building a culture of innovation; and accelerating the process of opening China up to the world.” 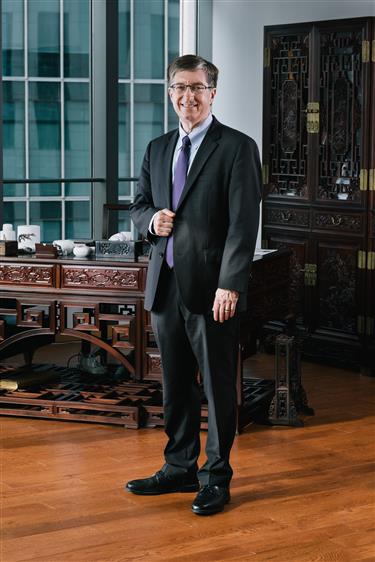 “Unfortunately, because those joint educational programs and institutes were placed inside the traditional universities, they could not be as independent and innovative as the government wanted,” said Lehman.

For him, the Sino-foreign universities established after 2003, granted their own independent legal identity under Chinese law, would be true joint ventures between Chinese mainland universities and overseas universities.

“The Ministry of Education asked them to be different, to play the same kind of innovative role for Chinese higher education that special economic zones have played for the Chinese economy,” he said.

Such joint universities are gaining popularity not only with Chinese students seeking an international education close to home, but also with international students interested in China.

NYU Shanghai is enlarging its enrollment year by year while DKU welcomed its first group of 266 undergraduates, bigger than planned, earlier this month.

Lehman told the forum at DKU that Sino-foreign universities were committed to developing new and effective ways to nurture a culture of innovation in China.

Therefore, students at traditional Chinese universities became expert in a field and skilled at analyzing whether a new idea is sound or flawed. But students at American universities learned to challenge conventional wisdom and question authority and became good at divergent thinking because they were required to expand their inventory of ideas by studying a wide range of disciplines, including humanities, social sciences, natural sciences and mathematics.

Both NYU Shanghai and DKU have designed new curriculum and teaching practices intended to fuse these two traditions, so that their students become good at all four steps.

He said the joint universities were also dedicated to developing new and effective ways to help China accelerate the process of opening up to the rest of the world.

“Effective opening up requires talents who have a cosmopolitan world view,” he said. “Cosmopolitan talents know how to use appreciation for cultural differences to build bridges of cross-cultural understanding. They know how to ensure that multicultural teams are able to work well together.”

He pointed out that neither traditional Chinese universities nor traditional Western universities had been very good at nurturing cosmopolitan talents because almost everyone of them drew at least 75 percent of their students from the nation in which it was situated and so-called international students had to learn to fit into the local culture.

“Through experiments like NYU Shanghai and Duke Kunshan, China is now breaking that tradition,” he said. “Far more than 25 percent of our undergraduate students come from other countries. And we push all our students to seize the opportunity to become cosmopolitan, multiculturally effective talents.”

At NYU Shanghai, students are not allowed to subdivide into a Chinese student body and a foreign student body. They are pushed to become a single, integrated student body where every student spends at least two hours every day with someone from another culture.

“When they first start out, our students (whatever their nationality) are typical of their generation. Most of them hold strong, negative, baseless stereotypes about people from other countries,” he said. “And most of them are surprisingly defensive in discussions about their own countries, reflecting what I sometimes call a ‘fragile patriotism.’ But after four years of intense, mandatory engagement with classmates who come from all over the world, almost all our students have changed dramatically. They have relinquished the false stereotypes they brought with them.

“Even more importantly, they have developed a much more mature appreciation for their own countries. They no longer need to think their own country is perfect and all others are defective. They understand that every country, including their own, has both strengths and weaknesses.”

Lehman believes that Sino-foreign universities also have the ability to make important contributions to their foreign parent universities.

“Our foreign parent universities appreciate the fact that we are not mere branch campuses,” he said. “Our double identities stimulate creative innovations that we can then contribute to those foreign parents as well.”