Altruistic Englishman who invested in welfare of Shanghai

When the building at 1320 Beijing Road was near completion in September 1932, the China Press said it would be “the largest and most finely equipped research hospital of its kind in the Far East and is equal to most anywhere in the world.”

The establishment of the Henry Lester Institute of Medical Research realized the Last Will and Testament of Henry Lester, a British millionaire landowner and philanthropist whose name is intimately associated with early Shanghai history. 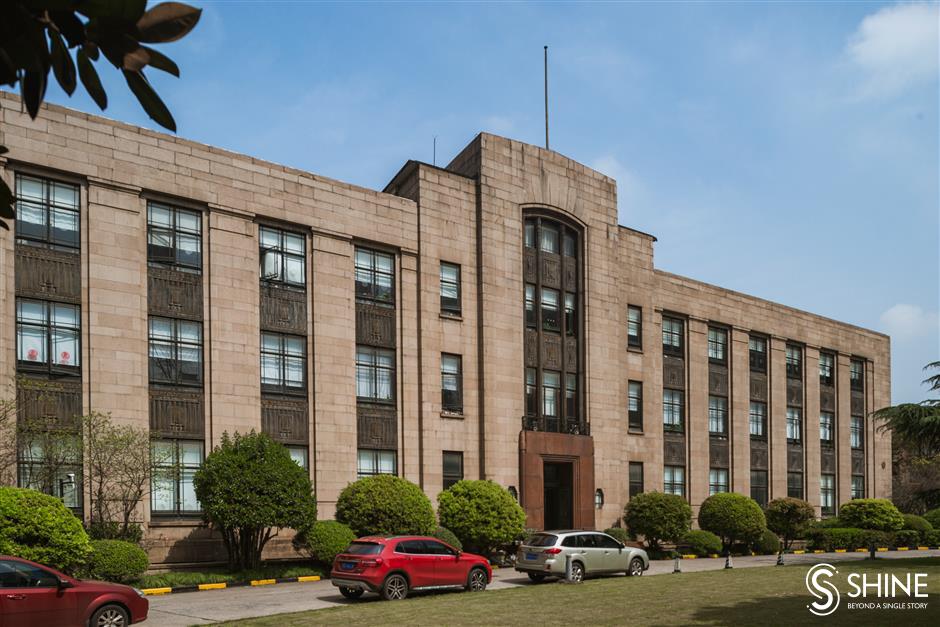 “Among the tens of thousands of expatriates living in modern Shanghai, Henry Lester with his unique character and noble virtue glittered brilliantly,” famous Shanghai historian Xiong Yuezhi wrote in the preface for the book “Bequest and Memory” by Fang Yunfang.

The medical research institute had been built entirely for research purposes where a staff of physicians and scientists had some headquarters.

Sitting well back from the street, the institute was surrounded by a brick wall; the entrances were guarded by heavy bronze grills. There was a three-story building and on either end of the ground floor were large rooms, one of which had been used as a lecture room and the other as a medical library.

According to the China Press on September 15, 1932, the lecture room contained a stage and preparation rooms behind it. The library had a journal room in connection with it. The remainder of the ground floor was used for conference rooms and offices. 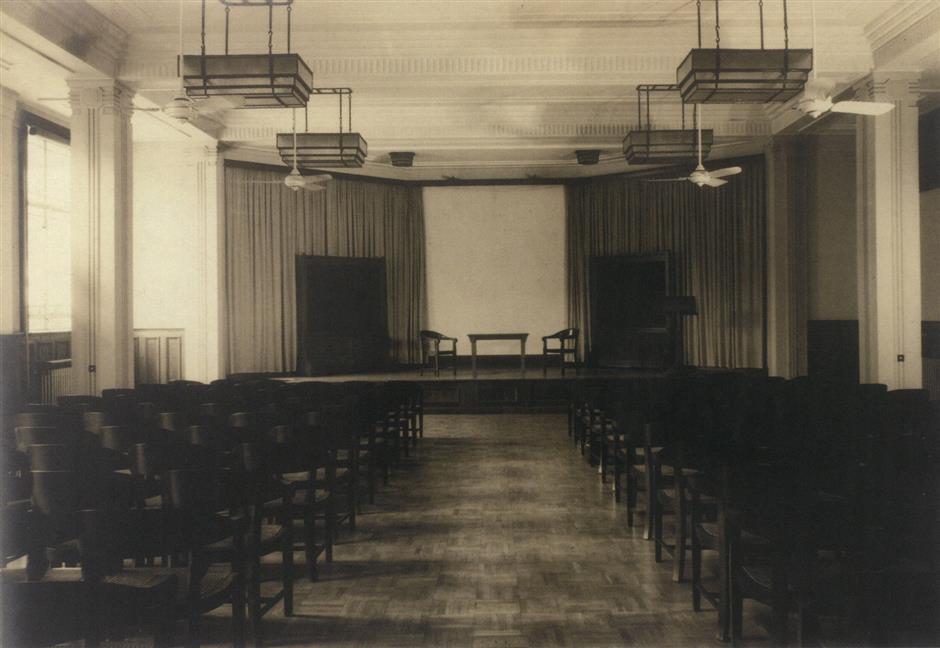 A file photo of the lecture room in the 1930s, which shows a stage and preparation rooms behind it.

“On entering the main entrance hall, flanked on either side by the porter’s office and telephone office, one faces the elevator. Long corridors extend away on either side, on to which open the offices. Ascending to the first floor, which will house laboratories, one finds a similar arrangement of space. Each room will be devoted to a special use. The third floor, beside housing other laboratories and offices, will contain a large museum of medical research. The roof is flat and is open and sunlit, containing much space,” the China Press said. 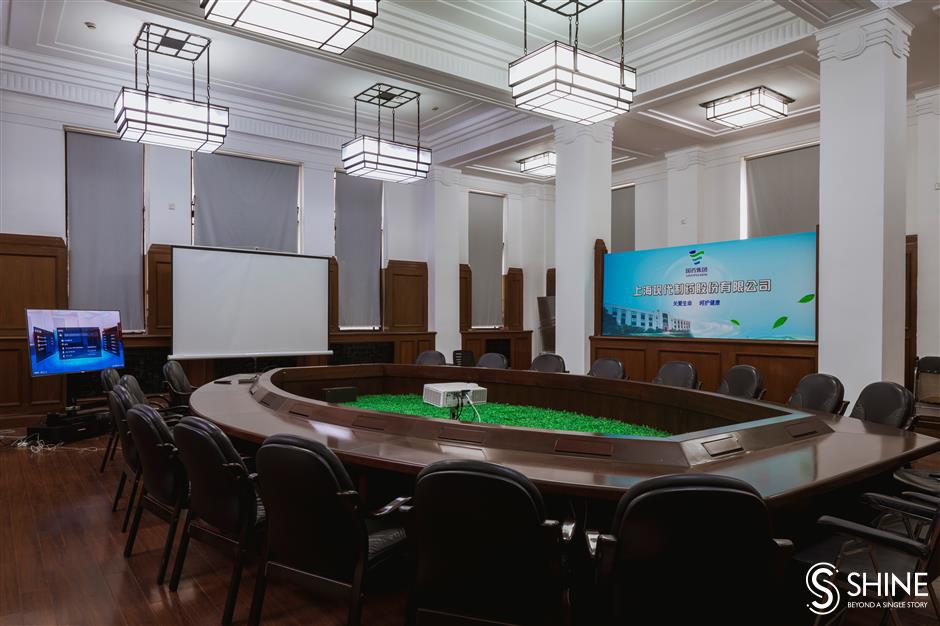 Inside of the lecture room today

The medical research institute was one of the two major philanthropic projects constructed to realize Lester’s will.

The other one was a three-story structure in Art Deco style for a combined Lester school — the Henry Lester Institute of Technical Education, which is located on today’s Dongchangzhi Road in Hongkou District.

The object of the school was to provide sound fundamental training in the sciences and technology for boys preparing to enter the building and allied trades. In the technical institute more advanced and more theoretical training would be given.

Both the medical research institute and the institute of technical education were designed by the architects of Lester Johnson and Morriss, a firm co-founded by Henry Lester.

Born in 1840 in Southampton, Lester, who had received his training in London as an architect and land surveyor, came to Shanghai in 1863-64 to survey the settlement for the Shanghai Municipal Council. He also served in the Public Works Department of the French Council. It is said he followed a doctor’s advice and embarked on a journey to Shanghai after an unknown disease took the lives of all three of his brothers.

It seemed he made the right choice and Shanghai became his lucky city. After his service in the municipal council was completed, he started his own business. 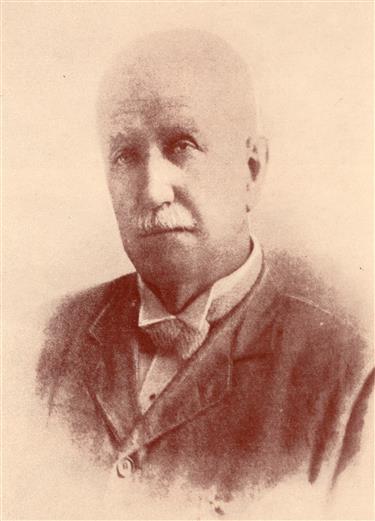 His company, Lester Johnson & Morris, became one of the most well-known architectural firms in town. A man of great foresight, he saw the potential of Shanghai and made large investments in property. Prior to his death, he was one of the largest landowners in Shanghai. Most of his property was used for the purpose of Chinese buildings.

With so much money and land in hand, Lester was unlike most tycoons in modern Shanghai who often lived an extravagant life by building gorgeous mansions and hosting parties night after night.

He never married, lived in the dormitory of Shanghai Club on the Bund, had no cars and often took buses. He seldom bought new clothes and most of his clothes were gifts from friends.

Before he died in May 1926, Lester bequeathed most of his assets to philanthropy, including the St Luke’s Hospital, the Institution for the Chinese Blind, the Children’s Refugee, The Little Sisters of the Poor, The Shanghai Mission for Ricsha Men and St Joseph’s Asylum for the Poor.

He also left the bulk of his fortune for the re-establishment of the Cathedral School, for the building of the Lester Chinese Hospital and a Henry Lester School and Institute of Technical Education.

In carrying out the latter provisions, the Trustees and their advisers decided to establish two institutes, one for medical research and the other for technical education. The Lester school was to be closely associated with the technical institute. 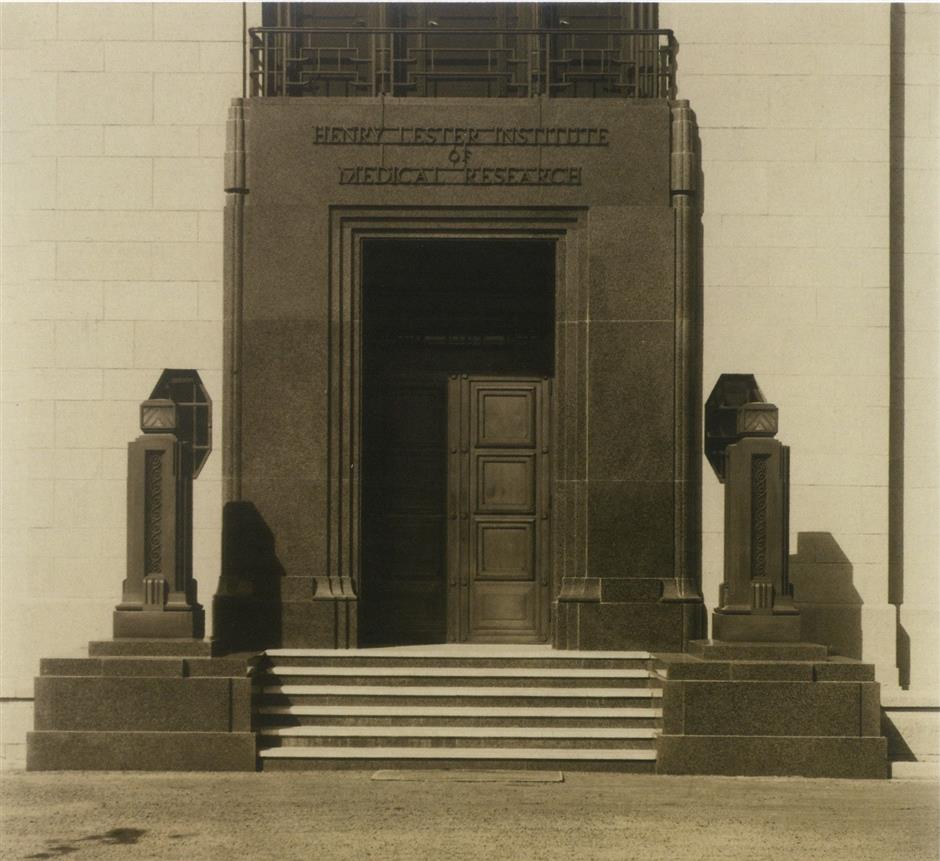 The main entrance in the 1930s had the name “Henry Lester Institute of Medical Research” over the door.

“I declare that for about 60 years my principal and permanent home has always been and that it still is and will be in Shanghai in China and that long since I chose China as my domicile and such is my domicile now,” Lester stated in his will.

Time flies but Lester’s legacy still glitters in the city he loved.

The Lester Chinese Hospital turned to be today’s Shanghai Renji Hospital on Shandong Road. The Lester school lasted only for less than 10 years due to World War II but nurtured hundreds of outstanding “Lester Boys” who grew up to be Chinese professionals in all aspects of life. Shanghai History Museum hosted a special exhibition dedicated to the Lester school and its students in 2004.

The medical research institute was fortunate to always be tied with medical or scientific research after the Shanghai Institute of Pharmaceutical Industry was founded here in 1957.

“The walls of the building at 1320 Beijing Road W. were tall and people could only see the top of a grand building and lush green trees. They had to admire the grandeur of the building only when the gate opened occasionally. Our institute has always been shrouded with a mysterious veil until the solid surrounding walls were replaced by railings during a renovation in the 1990s. Our institute had congregated a large amount of renowned experts and excellent technicians from large medical factories, such as Lei Xinghan and Tong Cun. It was reputed as the best comprehensive medical and pharmaceutical research institute in China,” Hu Guoliang, the late office director of the institute, wrote in an article about the building. 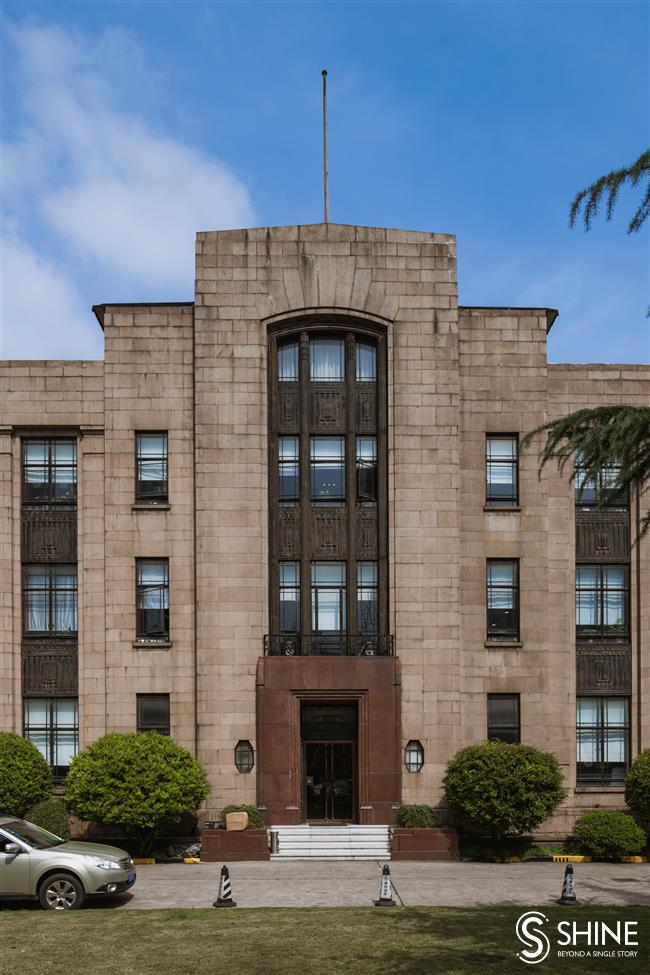 After Lester died in 1926, he was buried 10 minutes’ walk from this institute built according to his Will. He rested in peace in the now Jing’an Park, which had been Bubbling Well Cemetery for local expatriates since 1898.

“Many American and European expatriates who first came to Shanghai boasted cultural privilege and despised Chinese culture. But with extensive contact with and a deeper understanding of Chinese people, some of them gradually paid more attention to or even loved Chinese culture. They became more friendly to the country. Lester was a typical example of its kind,” Xiong said during a recent lecture.

Today, the Lester Trust still supports Chinese students and scholars to study or research in the United Kingdom. In the conditions for applications, “the grant will give a Chinese citizen, whose knowledge and skill obtained, will be for the benefit of the people of China.”

The official English website for the Lester Foundation contained two big Chinese characters which are “Shanghai.”

Tips: The building is not open to the public but you can see the façade on Beijing Road. You can also visit the Henry Lester Institute of Technical Education at 505 Dongchangzhi Road which is a hospital. 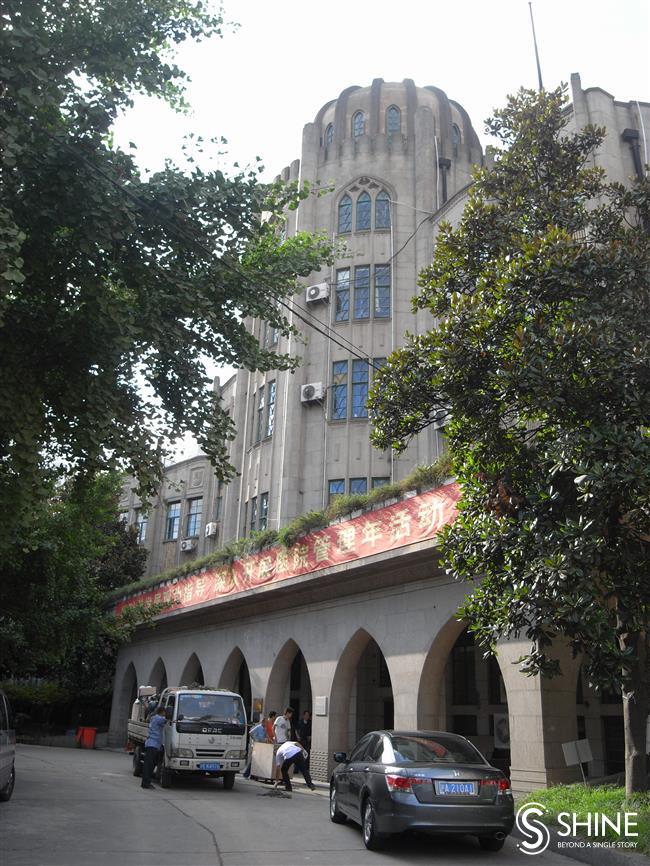 Covering an area of 10,000 square meters, the Henry Lester Institute of Technical Education, also known as the Lester school at 505 Dongchangzhi Road in Hongkou District, is an imposing three-story structure aligned on both sides of a four-story central unit and tower.

The object of the school is to provide a sound fundamental training in the sciences and technology for boys preparing to enter the building and allied trades. In the technical institute, more advanced and more theoretical training will be given.

Built in 1934 and designed by the Lester Johnson & Morriss Co, this was an unusually large building combining different architectural styles on one body.

Visitors are first struck by a beautiful array of Gothic arches on the ground floor. As you look up, a gigantic dome emerges. The building looks like a sailing ship from afar and in a bird’s-eye view it resembles a flying plane. It’s a mixture of Gothic and Art Deco styles.

The walls are delicately adorned with small square-shaped, butter-colored tiles. The staircase is paved with terrazzo tiles. No excessive interior decorations are seen for this former famous institute.

The Lester school during a decade of operation in Shanghai had trained hundreds of “Lester Boys” who grew up to be Chinese professionals in all aspects of fields, including Charlie Cheng, a renowned urban planner and architect who enrolled in the school in 1935.

According to his biography, the school used everything from the United Kingdom, from chalks to all the teaching faculties. The institute recruited only male students majoring in science and technology. It also provided scholarships for talented students from poor families.

“My teacher H. Miller, an architect who graduated from the Liverpool University, had taught me the responsibilities and the ultimate power of an architect ... An architect does more than just drawing and building,” Cheng wrote.

In 1938 Cheng went to further his study in the School of Architecture, University of Liverpool, wth the encouragement of Miller.