China's e-yuan gets tested at the grassroots ahead of rollout

Shenzhen resident Zhao Xiaoran, 29, was among 50,000 lucky recipients who won 200 e-yuan (US$30) in a government lottery, part of a pilot project to test China’s new cryptocurrency at the grassroots.

The district of Luohu, in the southern city of Shenzhen, Guangdong Province, collaborated with the People's Bank of China in issuing 10 million yuan worth of the new currency, which is called Digital Currency Electronic Payment, or DCEP.

China’s central bank is the first in the world to advance its own digital currency to such a late stage. The move has been in the planning for years. Once adopted, it would become the world’s first official currency to exist in cyberspace.

“This is an important aspect of the country’s intelligent financial infrastructure campaign,” said Yu Jianing, president of Huobi University and an expert on virtual currencies. “The implementation of an official digital currency will have an impact on China's financial sector and its socioeconomic development in the next two decades.”

Winners like Zhao need to download an app to receive and spend the digital money. It can be used at over 3,000 designated retailers in Luohu District. Altogether 62,788 transactions were made with the digital currency during the promotion period ending Sunday, with the transaction amount totaling 8.76 million yuan, according to data from the local government.

“I signed up for the program just for fun, like everyone around me,” Zhao told Shanghai Daily. “My colleagues and friends are all talking about it. It’s really cool.”

She said she doesn’t fully understand virtual currencies but would use the e-yuan as a payment option in the future, if it proves convenient.

“I hope the government will do more to popularize the digital currency with the general public,” said Alex Li, a friend of Zhao’s.

The digital yuan is expected to be extended eventually to other sectors, such as driverless cars, the Internet of Things and the industrial Internet, where transactions can be completed among devices automatically, using new technologies such as 5G, Huobi University’s Yu said.

The Shenzhen trial is the largest to date among four Chinese cities involved in the pilot program. Also participating are Suzhou in Jiangsu Province, Chengdu in Sichuan Province and Xiong’an in Hebei Province.

Pilot programs have made “positive progress,” with the currency having been used for more than 1.1 billion yuan worth of transactions, including bill payments, transport and government services, Fan Yifei, a central bank deputy governor, said earlier this month.

The virtual currency will also be used at the 2022 Winter Olympics in Beijing, he added.

“The People’s Bank of China regards the digital yuan as an important financial tool of the future,” Fan was quoted as saying in the Hong Kong newspaper South China Morning Post.

CITIC Securities, a major Chinese investment bank, forecasts that the digital currency will be formally rolled out by the end of the year. 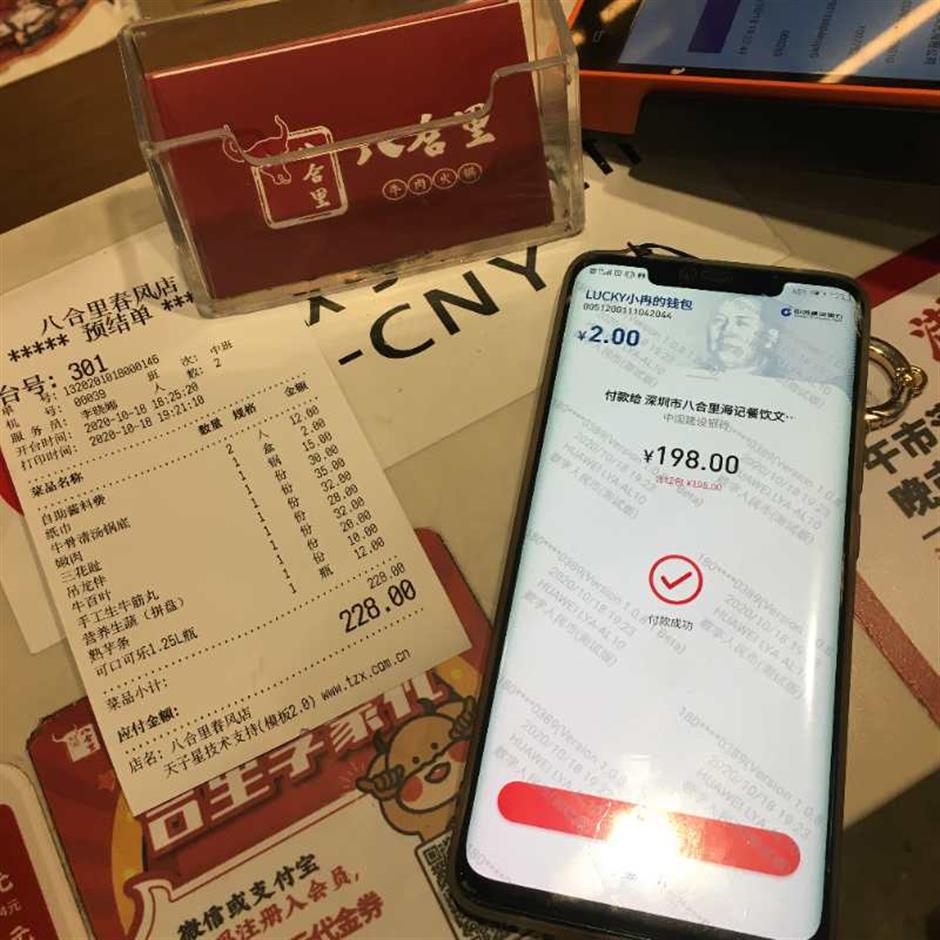 A winner of the digital currency uses the money to pay for a restaurant bill in Shenzhen, Guangdong Province.

Its success depends on public acceptance. That is helped by the fact that the Chinese population nowadays overwhelmingly uses mobile payment systems, like those provided by WeChat Pay and AliPay. The COVID-19 epidemic may have given the new currency an unexpected lift as people fear infection from handling cash.

The new digital currency, with technologies supporting what is called “controllable anonymity,” is seen as a tool to help the central bank and regulators better manage financial market, without breaching privacy issues for consumers and sellers, analysts said.

Traditional paper note is completely anonymous and generally doesn’t leave traces of transactions. That element of consumer privacy changed with the advent of electronic payment systems like Alipay, WeChat and PayPal, which allow service providers access to transaction information.

Many central banks around the world are working on their own digital currencies. The People’s Bank of China has been engaged in research of its own since 2014.

There are big differences between the central bank’s digital currency and encrypted versions like Bitcoin.

The e-yuan will be a legal currency, based on national credit and a stable value, while encrypted versions are dependent on the consensus of the user community and often have highly volatile swings in value. Many encrypted currencies come with high risks, even though they rely on so-called “blockchain” technology to protect trader privacy and anonymity, but not the value of their holdings.

The central bank’s digital currency adopts what is called "technology neutrality,” which means it uses blockchain for anonymity features while relying on other technologies to allow regulators to track financial crimes.

Participants in the Shenzhen lottery, like Fan Ziyun, appear initially supportive of the e-yuan.

She said she believes it will further facilitate global trade.

Jason Chen, a 26-year-old doctor who entered the lottery but didn’t win, said he has strong confidence in the new currency because the central bank has put so much research into it.

Chen said he started paying attention to the concept a year ago and will duly invest some money in the future.

The index has been highly volatile in recent months as investors assess the central bank’s “technology neutrality” policy.

Chen said an official e-yuan will be safe but he doesn’t think it will have much impact on a consuming public already relying on easy-to-use payments like Alipay and WeChat Pay.

Alipay and WeChat, each of them with about 1 billion users in China, can easily develop added-value services for users. They might even serve as distribution channels for the new currency in time, analysts said.

Qu Tianshi, an economist at Bloomberg, told Shanghai Daily that the digital yuan is designed as a replacement for cash and will function as an electronic version of banknotes.

“It may be the right time now for China to introduce such a currency,” Qu said.

﻿
Special Reports
﻿
Lockdown leaves a blind spot in the income of many masseurs
Coffee boutiques need a double-shot of post-lockdown revival
Shanghai dining: the thrill and challenge of finding a place to dine out
Livestreamers on the carpet: Be careful what you do and say
Tight job market doesn't daunt a new force in the workforce
F&B entrepreneurs try to regain foothold post-lockdown
Pudong Expo shifts to metaverse tech to attract Gen Z visitors
Pudong exhibition hall one of the hottest shows in town
Snip! A burgeoning business is nipped in the bud by coronavirus
Your voices heard: Grassroots liaison in lawmaking proves its value
EXPLORE SHINE