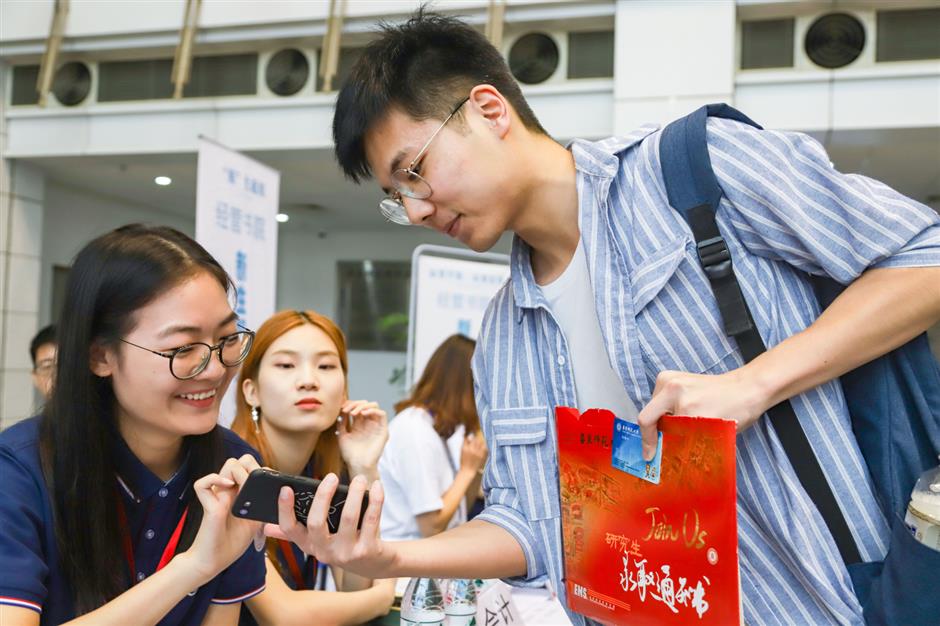 A student registers at East China Normal University on Sunday.

Local universities welcomed freshmen over the wet weekend with technologies such as artificial intelligence and facial recognition, a lawn concert, and garbage sorting guidance.

More than 3,000 Chinese students and 300 some from 51 countries and regions registered as undergraduates at Fudan University yesterday.

This year, the university’s smart campus system enables them to register with the 10 facial recognition devices instead of tedious material checks and signatures using human staff.

Meanwhile, a robot named “Xiaoying” that can answer questions about the registration process, as well as future studies and life, also attracted curious students and parents. When people asked for a photo, the robot can change its pose.

As this year marks the 70th anniversary of the founding of the People’s Republic of China, a poetry reading activity was held for students to read their own or others’ verses, with good wishes for the country. Video clips of their reading were spread on social media such as Weibo, WeChat and Tik Tok.

The university also prepared bins for wet and dry trash and posted notification of garbage sorting in each dormitory room following the implementation of the new regulations in Shanghai in July. Property management staff are also deployed to guide new students classify and damp the garbage correctly.

The university has seen an increasing number of students from overseas, and Mukhtasar Rustamova, from Uzbekistan, was among them on Sunday.

She, with her Chinese name “Mu Hua”, has studied Chinese at a Confucius Institute for four years and won first prize at the 2016 “Chinese Bridge” competition in Uzbekistan and represented her country in the global final in China in 2017.

In fact, all her younger sisters are also learning Chinese now. Yun Hua, the eldest of her sisters, joined Xiamen University this year.

The five sisters also performed a Chinese song for Chinese First Lady Peng Liyuan in 2016 when she visited Uzbekistan along with President Xi Jinping.

Rustamova will study international politics at Fudan for four years and said she wished to become a diplomat after graduation to enhance relationship between China and Uzbekistan.

At East China Normal University, a total of 10,222 new undergraduate and postgraduate students arrived yesterday in the rain, with 5.4 percent from overseas.

At the university’s campus in Putuo District, a special concert was organized in front of the lawns near the gate. The performance included piano music created by famous pianist Liszt and Rachmaninoff and songs in honor of China, such as “My Country and I”, which attracted many students to sing along. 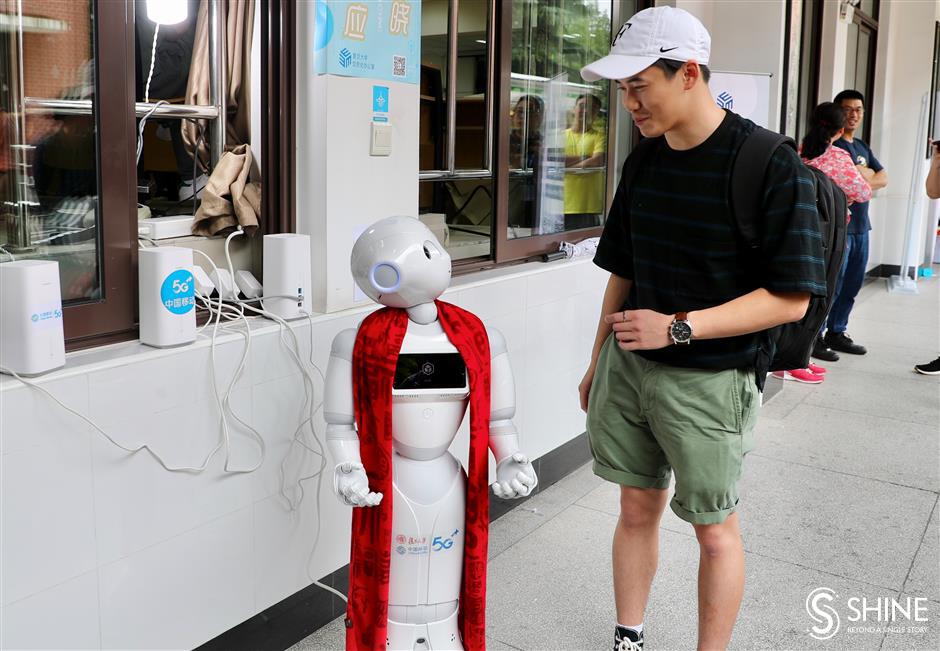 Joshua Chan, an Australian student, talks with the robot “Xiaoying” at Fudan University. 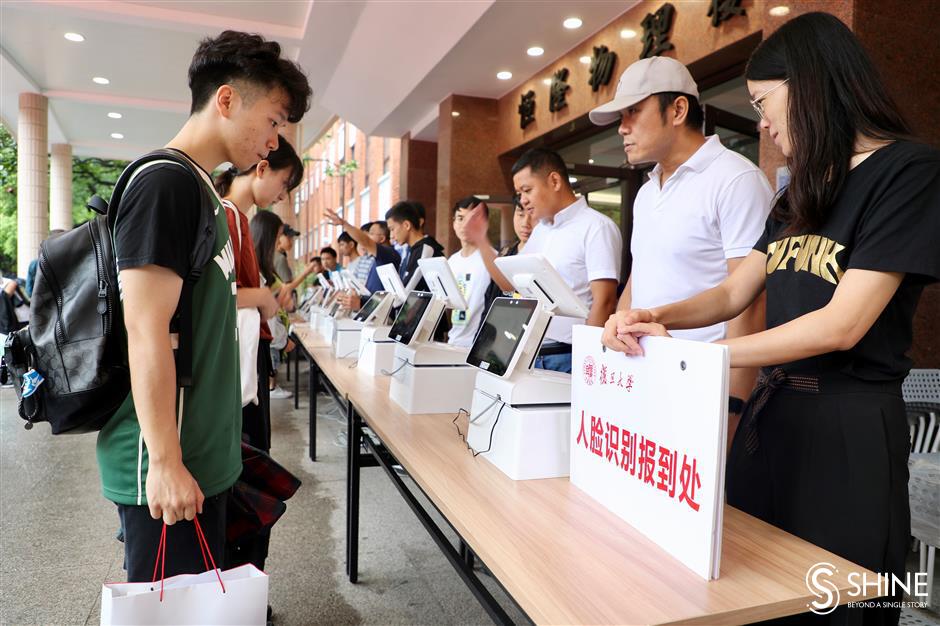 Students register with facial recognition devices at Fudan on Sunday. 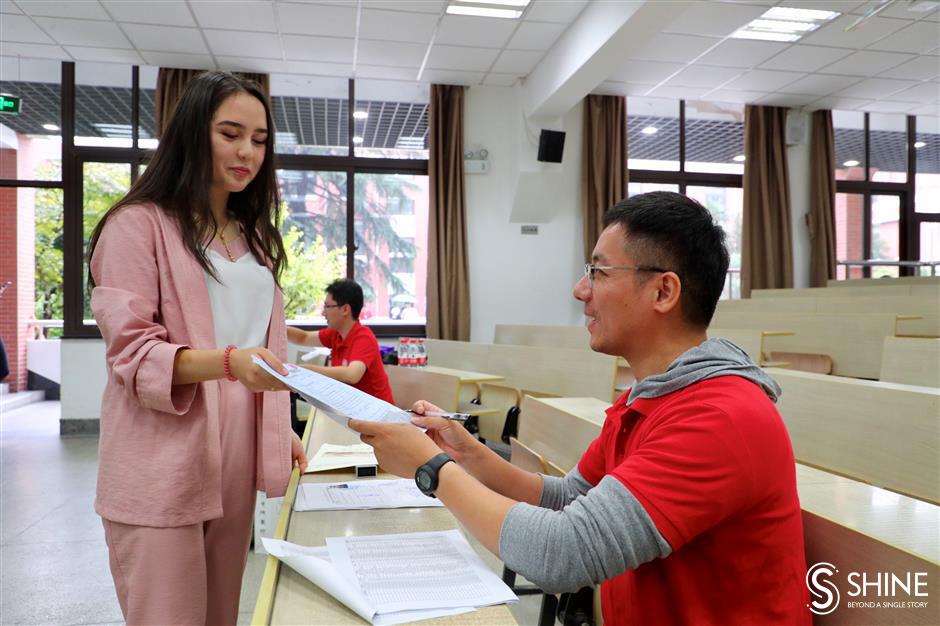 Mukhtasar Rustamova, a student from Uzbekistan, registers at Fudan. 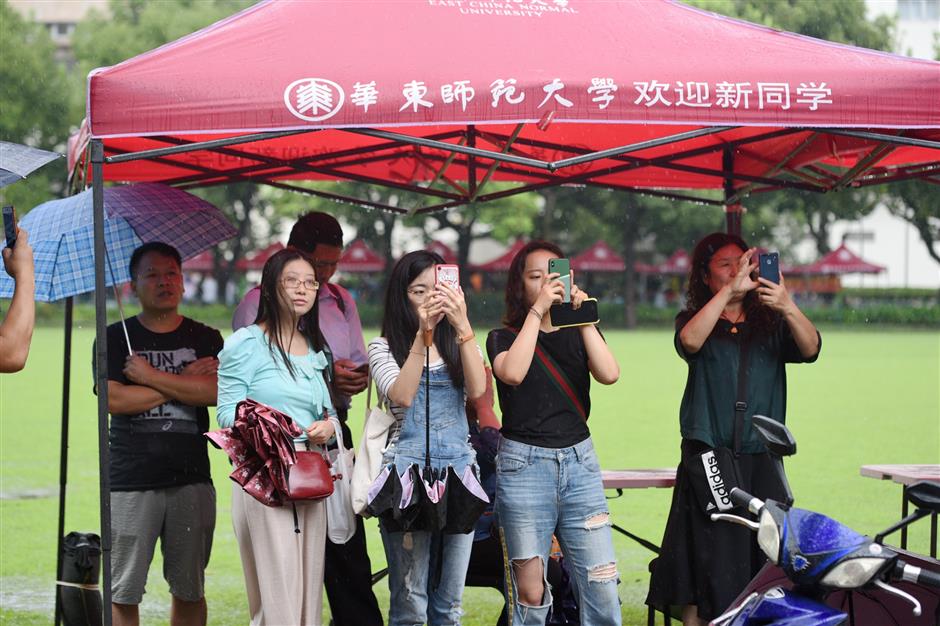 Students take pictures of the performers during the lawn concert at East China Normal University.