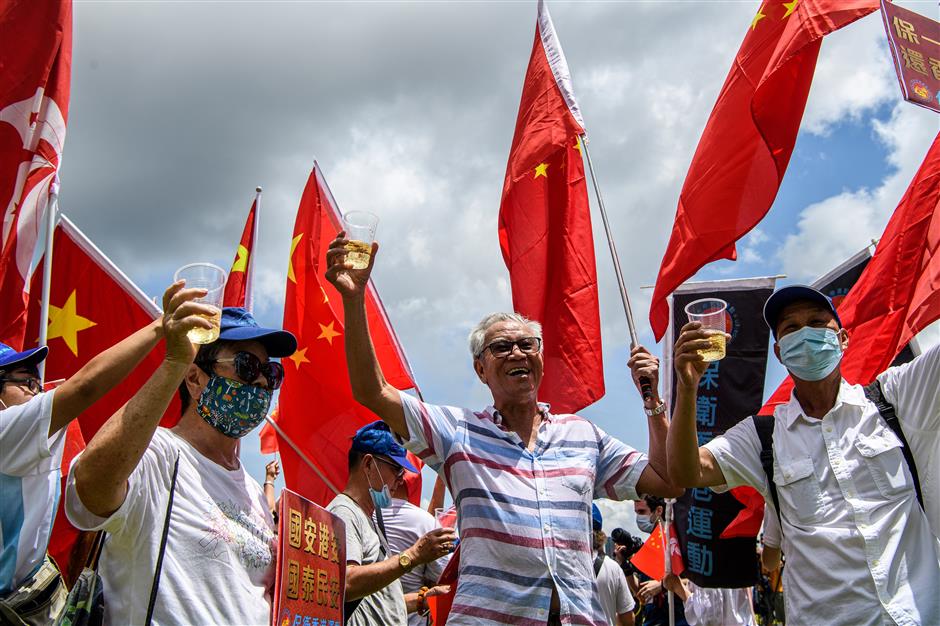 Hong Kong residents display Chinese and Hong Kong flags as they raise a toast with champagne during a rally near the government headquarters in Hong Kong to celebrate the passing of a national security law for the city on Tuesday.

China unveiled its national security law for Hong Kong on Tuesday, punishing crimes of secession, subversion, terrorism and collusion with foreign forces with up to life in prison.

The law was passed unanimously by 162 members at the 20th session of the Standing Committee of the 13th National People’s Congress, China’s top legislature.

President Xi Jinping signed a presidential order to promulgate the law. It took effect at 11pm Tuesday after the promulgation of the law was signed by Hong Kong Chief Executive Carrie Lam and published in the Gazette.

The legislation is aimed at curbing subversive, secessionist and terrorist activities, as well as collusion with a foreign country or external elements to endanger national security. It follows months of violent protests in Hong Kong last year.

The full text of the law gave three scenarios when the office might take over a prosecution — complicated foreign interference cases, “very serious” cases and when national security faces “serious and realistic threats.”

“Both the national security office and Hong Kong can request to pass the case to Chinese mainland and the prosecution will be done by the Supreme People’s Procuratorate and the trial will be in the Supreme Court,” the law stated.

“No matter whether violence has been used, or the threat of violence used, leaders or serious offenders will be sentenced for life imprisonment or a minimum of 10 years in jail,” it says.

The law, formulated based on an NPC decision on establishing and improving the legal system and enforcement mechanisms for Hong Kong to safeguard national security, has 66 articles in six chapters, and is a comprehensive law with substantive law, procedural law and organic law contents.

It thus establishes the legal system and enforcement mechanisms for Hong Kong to safeguard national security.

After the adoption of the law, the NPC Standing Committee, in accordance with the requirements of the NPC decision, consulted its HKSAR Basic Law Committee and the Hong Kong government, and adopted a decision on Tuesday afternoon to list the law in Annex III to the HKSAR Basic Law.

The newly adopted decision stipulates that the law shall be applied in Hong Kong by way of promulgation by the region. 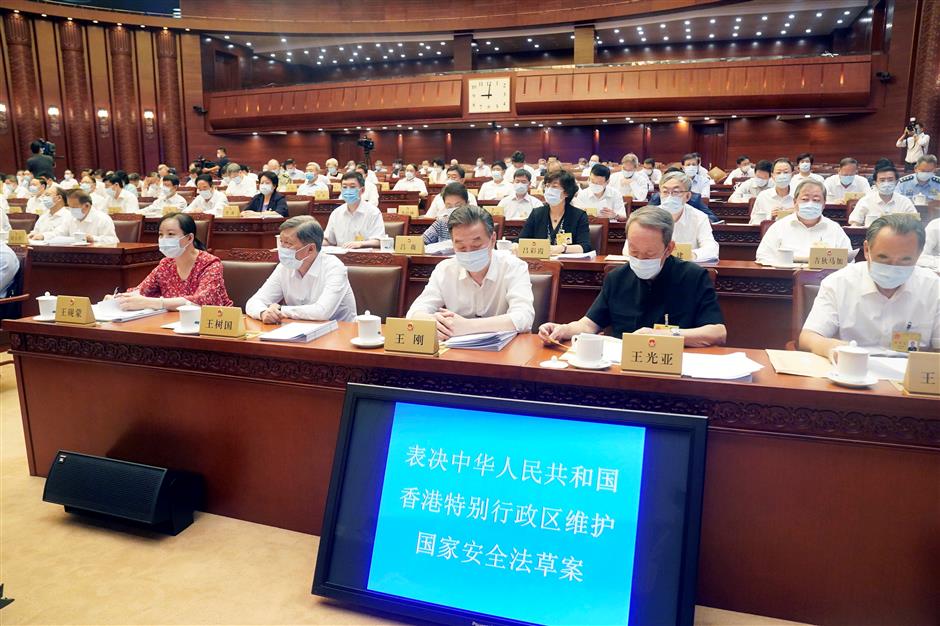 Lawmakers attend a session of the Standing Committee of the 13th National People’s Congress in Beijing to vote on a draft law on safeguarding national security in Hong Kong on Tuesday.

The law is a landmark one for upholding and improving the institutional framework of the “one country, two systems” under new circumstances. It will effectively safeguard national security, and lasting peace, stability and prosperity in Hong Kong, and ensure the steady and sustained development of the cause of the “one country, two systems” in Hong Kong.

Hailing the legislation, Lam said Hong Kong government will complete the necessary procedure for publication by gazette as soon as possible to enable the implementation of the law in Hong Kong in tandem.

Speaking earlier on Tuesday in a video message to the UN Human Rights Council in Geneva, Lam said the law would fill a “gaping hole” and would not undermine its autonomy.

“It will only target an extremely small minority of people who have breached the law, while the life and property, basic rights and freedoms of the overwhelming majority of Hong Kong residents will be protected,” she said.

Hong Kong had been “traumatised by escalating violence fanned by external forces,” she said. “I urge the international community to respect our country’s right to safeguard national security and Hong Kong people’s aspirations for stability and harmony.”

Supporters of the law popped champagne corks and waved Chinese flags in celebration in front of government headquarters.

“This will leave anti-China spies and people who brought chaos to Hong Kong with nowhere to go.”

“For the small minority who endanger national security, this law will be a sword hanging over their heads,” said China’s main body for Hong Kong affairs. But “for the vast majority of Hong Kong residents and foreigners in Hong Kong, this law is a guardian spirit that protects their freedoms,” the Hong Kong and Macau Affairs Office said.

The statement added that the central and city governments would jointly ensure the law is implemented, and “usher in a turning point, for chaos to turn into governance.”

Beijing’s liaison office in Hong Kong said the implementation of the law “is a major improvement of one country, two systems.” It said “no one should underestimate the central government’s determination to maintain Hong Kong’s national security” or “underestimate the ability of the central and special agencies to enforce laws strictly.”