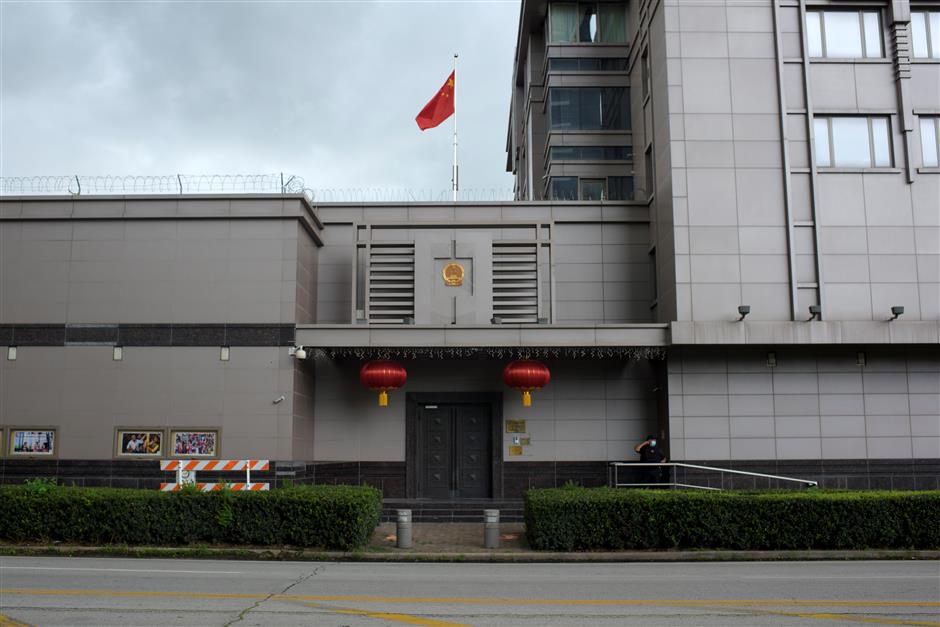 The Chinese flag flies outside of the Chinese consulate in Houston, Texas, on July 22, 2020.

China said on Thursday the US request to close the Chinese Consulate General in Houston will cause serious damage to bilateral relations, calling the move "taking down the bridge of friendship between Chinese and US people."

The consulate general in Houston was the first one set up by China in the United States after the establishment of diplomatic ties.

High-ranking US officials claimed Wednesday that the move was to "protect American intellectual property and Americans' private information."

In response, foreign ministry spokesperson Wang Wenbin said Chinese diplomatic missions in the United States, including the consulate general in Houston, have been committed to promoting friendship and cooperation between the two peoples, and have always adhered to international and local laws in performing their duties.

Over the past four decades and more, the consulate general has done a great deal in promoting mutual understanding among various communities and cooperation in various sectors between the two countries, Wang told a daily press briefing.

"The US claim of the consulate general's engagement in activities not in line with its duties is purely malicious slander," said the spokesperson.

Wang rebuked the US move as a serious breach of international law and basic norms governing international relations as well as bilateral consular agreement. It is causing serious damage to bilateral ties, Wang said, calling it "taking down the bridge of friendship between Chinese and US people."

While answering a question, the spokesperson said in July 2018 and January 2020, the US side opened China's diplomatic pouches twice without permission, which was a flagrant violation of the Vienna Convention on Diplomatic Relations and the Vienna Convention on Consular Relations, and a grave infringement on China's diplomatic dignity and security interests.

After these incidents happened, the Chinese diplomatic mission in the United State immediately made solemn representations to the US side. The US side did not deny the relevant facts, but repeatedly used technical reasons as an excuse to shirk responsibility for its wrong acts, according to the spokesperson.

"What the US has done runs counter to international law and norms governing international relations and should be condemned," he said.

Wang also responded to a question on the US accusation that, with "false identities," China's consul general in Houston and two other diplomats escorted Chinese travelers aboard a charter flight at the Houston airport gate area.

Wang said the personal information of staff working at Chinese diplomatic missions is open and transparent to the US side, and Chinese consular officers entered the restricted area of the airport with approval from the US side.

"Using identity documents of consular officers issued by the US State Department, they simply took care of Chinese citizens boarding temporary flights," Wang said, stressing that this is reasonable and legitimate with many precedents.

The US accusation is not in line with the facts, Wang said.