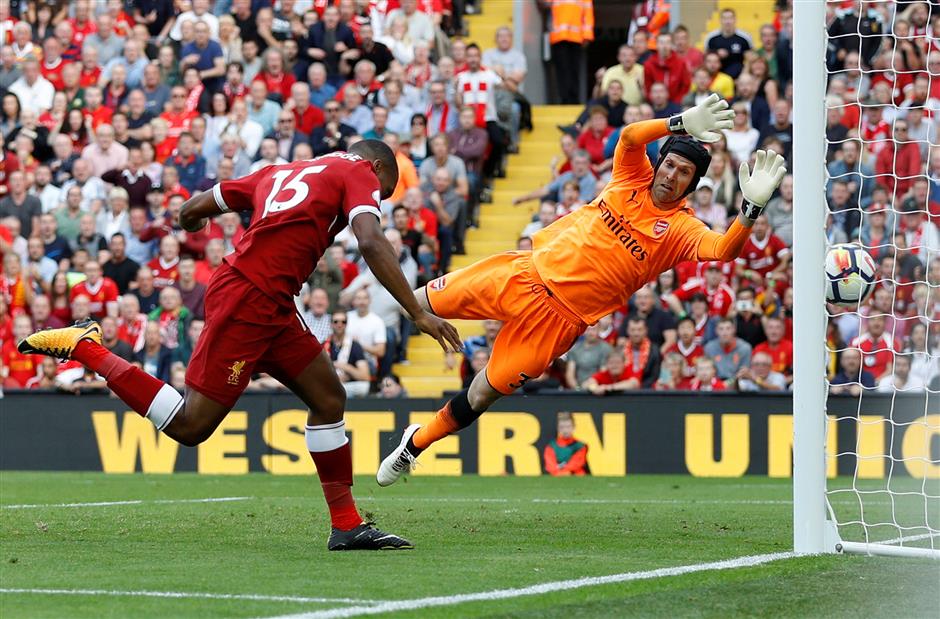 Daniel Sturridge heads to score Liverpool's fourth goal against Arsenal during their English Premier League game at Anfield, Liverpool, on August 27, 2017. The Reds eased to a 4-0 victory.

Liverpool served up a thrilling display of attacking football as it ripped apart a woeful Arsenal 4-0 at Anfield in the English Premier League on Sunday.

Juergen Klopp's side went ahead in the 17th minute when full back Joe Gomez floated in a cross from the right and unmarked Brazilian Roberto Firmino headed home with ease.

Five minutes before the break, Liverpool broke with a flowing, passing move which ended with Sadio Mane cutting in from the left and driving a low shot into the far corner.

The contest was over in the 57th when Mohamed Salah stole the ball from a hesitant Hector Bellerin and burst from deep in his own half before coolly slotting past Arsenal goalkeeper Petr Cech.

The effervescent Salah created the fourth with a cross from the left which was headed home by substitute Daniel Sturridge to complete a humiliating day for Arsenal and its manager Arsene Wenger.

With its second victory of the campaign, Liverpool rose to second on seven points, two behind Manchester United, which beat Leicester City 2-0 on Saturday and equal on points with Manchester City which stunned Bournemouth with a late 2-1 victory, also on Saturday. Newcomer Huddersfield and West Bromwich Albion, which was held 1-1 by Stoke City earlier on Sunday, also has seven points.

Arsenal is 16th on three points.

Also, Tottenham Hotspur was held 1-1 at home by Burnley on Sunday, with the visitors equalizing in the 92nd minute.

What looked a tricky fixture on paper against Ronald Koeman's team turned into a stroll for Antonio Conte's side which has recovered well from a shock opening-day defeat by Burnley.

Morata's clever header set up Fabregas to give Chelsea the lead in the 27th, the former Arsenal player sliding the ball past 'keeper Jordan Pickford with a deft finish.

Everton offered very little and Chelsea doubled its advantage five minutes before the break when Morata climbed to head home Cesar Azpilicueta's inviting cross for his second goal for his new club since signing from Real Madrid.

It proved a frustrating afternoon for Everton's Wayne Rooney who wasted one chance and was shown a yellow card while Gylfi Sigurdsson, making his first EPL start for Everton, was given little chance to shine.

Chelsea 'keeper Thibaut Courtois was a virtual spectator and the hosts should have won by a clearer margin with Victor Moses and Pedro both guilty of squandering decent chances.

"We must be pleased with the performance. We played a really good game. We dominated and had plenty of chances," Conte said. "The only negative thing is we should be more clinical. But there were a lot of positive things."

Chelsea moved into sixth spot with six points while Everton, which has now gone 23 matches without a win at Stamford Bridge, have four.

At the Hawthornes, a defensive mix-up cost West Brom a third consecutive EPL victory and a share of top spot as Peter Crouch earned Stoke a 1-1 draw.

A game of few chances looked to be heading West Brom's way after new signing Jay Rodriguez stooped to head it into the lead after 61 minutes — his first EPL goal for the club on his home debut.

Ahmed Hegazi was close to making it 2-0 when his header from a Matt Phillips cross was well saved by Jack Butland.

Stoke was given a helping hand in the 77th when Hegazi and 'keeper Ben Foster went for the same ball, leaving Crouch the simple task of heading it into an open goal.

"It wasn't my finest goal, we will take them every day of the week," said Crouch, who came off the bench.

West Brom had been hoping to win its opening three games of a top-flight season for the first time since 1978 and continue manager Tony Pulis's record of never having lost against Stoke, his former club, as manager.

It managed the latter but will be ruing dropping two points in a game ithad seemed to have under control.

Stoke threatened first when Kurt Zouma's deflected shot looked to be spinning under the crossbar until a back-pedalling Foster tipped it over the crossbar.

It was pedestrian fare after that until just past the hour mark when Allan Nyom sped down the right and delivered a dangerous cross which Rodriguez met on the bounce to score.

The hosts could not hold on to the points, although Pulis said he was encouraged by the start to the season.

"I think we had the best chances. You look at the money that Stoke have invested and they are a good side. We wanted Kurt Zouma but couldn't afford that loan fee," he said.

"It's been a great start to the season."