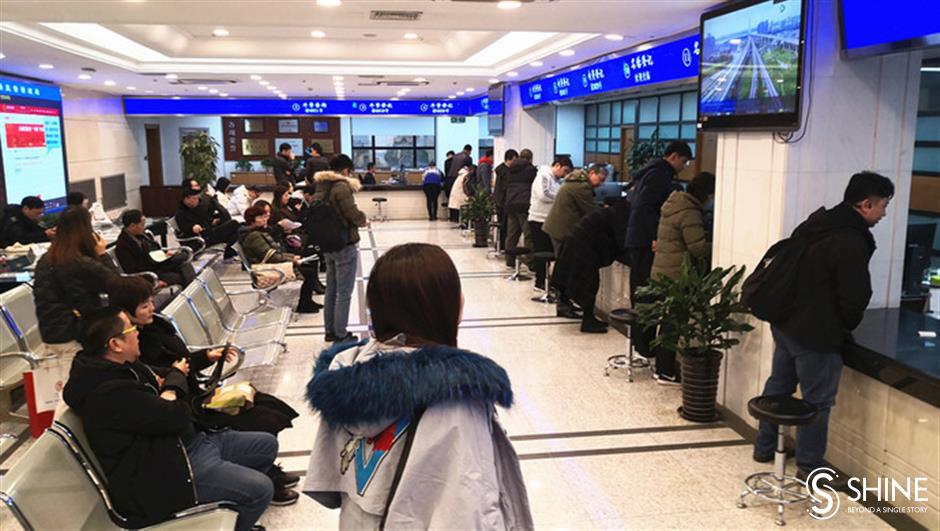 Staff worked overtime during the public holiday, and the government affairs service hall of Shanghai Administration for Market Regulation was far from congested on the first day of the year.

Shanghai's market authorities have plans to make doing business in the city easier and more efficient in the new year.

Applications for e-business license will be expanded to cover various market entities such as partnerships and farmers cooperatives, said Chen Xuejun, director of Shanghai Administration for Market Regulation.

The e-business license system will be connected with Shanghai's one-stop platform for government affairs.

"We will also work on embedding some of the most common issues such as tax, social insurance and housing provident funds into the e-license system, and allow companies to deal with everything through a single e-license," said Chen.

Applicants for startups will receive an "e-seal" when they get their e-business license, which will enable them to conduct e-commerce.

E-registration will be expanded to include all types of companies in the new year.

"The threshold of market access will be relaxed, efficiency raised and the business environment improved based on easier registrations," said Chen.

Separating permits from business licenses will shorten the time for a new business to begin full, formal operations.

An administrative penalty exemption list on minor irregularities in business operation is expected in the new year to create a more fair market system.

"Supervision and management should focus on the demands of businesses, and provide quality, efficient services for enterprises to develop," said Chen.

Changes have already been made this year, with staff working overtime on the public holiday to give the most powerful possible impetus to the new system.

"Last year, I would have needed to submit materials to many different authorities, and publish an announcement in newspapers, which involved several procedures and slowed the whole process," said Gan Yinjie, an employee of Shanghai Fengxiang Economy Technology Development Co Ltd, who applied for cancellation for his client on the first day of the new year.

After submitting three documents and filling in an application, he completed the process and was told the cancellation would be completed within the week.

"My client has several entities and wanted to merge some businesses," said Gan. "The short dissolution period is a big convenience."

Foreign-invested enterprises on the negative list will not be required to submit approval documents for company cancellation under the Foreign Investment Law. Shanghai has more than 91,000 foreign-funded enterprises, with combined registered capital of over US$640 billion.

Market authorities last year cut the time to start a new business in the city  from 22 days to five.

The one-stop platform merges authorities and allows online application and approval of licenses, company seal making and tax affairs. It means businesses no longer have to submit numerous reports different agencies all over town, as well as banks. Under the new system, departments share information.

In July, Shanghai's market watchdog and Shanghai Higher People's Court established a mechanism to try accelerate dissolution of enterprises. Zombie companies often lack account books and other documentation because they have not conducted business for a long time. Their former staff and legal persons can be hard, if not impossible, to trace. This lack of documentation means their business registrations cannot be easily canceled and their legal entity qualifications remain.

Under the new mechanism, liquidation decisions issued by courts can be used to apply for cancellation.