Li Chaojun and Feng Lin, a local couple in their 60s, said they hadn’t really made any definitive plans for their old age until that day arrived.

In March 2018, they moved to a retirement community called Aveo China Campus, attracted by its resort-like setting and lifestyle amenities. The community is adjacent to the ancient water town of Zhujiajiao in the Qingpu district, about an hour from downtown.

“I fell in love with it at the first sight,” he said. “It is the just place I have dreamed about to spend the rest of my days.”

Aveo China is a collaboration between the Aveo Group, an Australian company that develops, manages and operates retirement communities, and Tide Holdings (China) Ltd, a Chinese property developer.

China’s aging population is a lucrative draw for companies that provide services to the elderly, from insurers and real estate companies to nursing care and pharmaceuticals.

The number of people 65 years and older in China is expected to top 330 million by 2050, according to the United Nations. And the “pension economy” is projected to exceed 11 trillion yuan (US$1.59 trillion) in value by 2020.

Take Shanghai for example. The city now has nearly 5 million people aged 60 or older, accounting for about a third of all permanent residents.

Aegon THTF Life Insurance Co Ltd is among the companies seeking to tap the “gray market.” The underwriter is a joint venture between Dutch-based Aegon NV and Tsinghua Tongfang Co Ltd, a Chinese high-tech listed firm established by Tsinghua University.

The company recently launched Zide Club for its VIP clients with the cooperation of Aveo China, which provides comprehensive benefits in insurance protection, the right to live in a retirement apartment as well as care-taking services. Zide literally means “self-satisfied with joy” in Chinese.

The Zide Apartment will be operated under an agreement between Aegon THTF and Aveo China Campus.

Unlike Taikang Life Insurance and China Life Insurance, which have invested in elderly-care communities and hospitals, Aegon THTF has chosen a more indirect role by partnering with property developers and elderly housing operators.

In addition to membership fees, occupants are also charged monthly service fees to cover items such as maintenance, utilities in public areas, heating and Internet access. Zide Club allows its members to transfer the right of use for units across generations. If occupants aren’t in a hurry to move in, they can rent the apartment for five years. If the apartment is vacant, there’s a 60 percent discount on maintenance fees.

Such flexible options and discounts are rarely found in the market, according to Aegon THTF.

Unlike the Zide Apartment arrangement, the unit where Li and Feng are living doesn’t allow them to pass on their rights to the unit to the next generation.

Two years ago, the couple paid 1.35 million yuan as a “deposit” for a one-bedroom unit of 108 square meters. Aveo China Campus charges 5-6 percent a year on the deposit for nine consecutive years as management fees, and half of the deposit is eventually refunded to them.

The couple pays an additional 3,500 yuan per month for the care services they enjoy in the community. For dining, they can either eat in a cafeteria downstairs or make meals on their own.

Li and Feng said they value their independence and weren’t interested in traditional homes for the elderly where privacy isn’t the norm.

Complexes like Aveo China Campus have adopted the “continuum of care” model popular in homes for the elderly in Western countries. That means residents may enter the facility in independent-living units, and as they age and their health deteriorates, they move into rooms with higher levels of nursing care at the same facility.

It’s a vision of aging that is attracting more younger Chinese to think about their future.

Cao Lei, 40, a local working in the human resources department at a listed firm, told Shanghai Daily that she started to plan for her old age about 10 years ago.

Cao and three former college classmates originally thought they would like their families to live under the same roof in their golden years. They once talked, half in jest, about buying a big house on Chongming Island, a nature escape for city residents.

“That was our initial plan, and we have not thought beyond that to what would happen, say, if we needed assistance for basic living,” she said.

After learning from a friend of hers about the Zide Apartment, which has begun pre-sales and will officially open in December, she said she would share the information with her friends and seek their opinions.

“Living together with close friends is the key for me during retirement,” Cao explained. “As long as the facilities are OK and the community has quality medical resources, living in nearby areas like Jiangsu or Zhejiang provinces would also be acceptable to me.”

She is preparing for the future by buying wealth management products, investing in funds and insurance plans, and acquiring properties.

Choosing to live in a continuum-care community in first-tier cities is costly, and individuals with low or even middle incomes and assets usually can’t afford that option. Payment plans differ at each community, but a hefty entrance fee is usually required.

Occupants in the Aveo China Campus facility are mainly well-heeled intellectuals and retired professionals, many whose children have settled overseas, according to the campus brand general manager Yang. 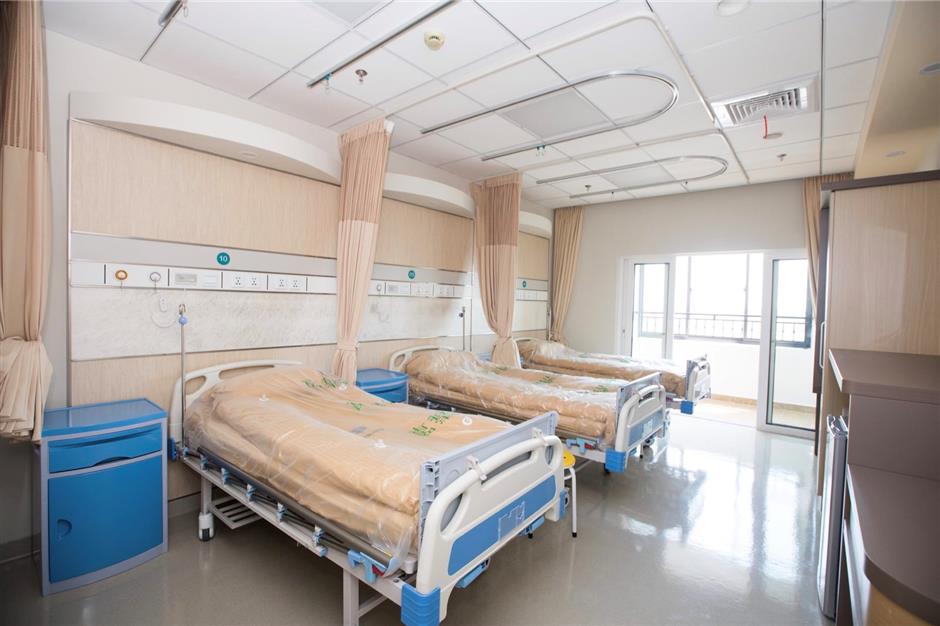 The nursing hospital and Zide Apartment at a retirement community called Aveo China  Campus. The largest units, at 120 square meters, are priced at around 2 million yuan and a studio of 58 square meters goes for approximately 850,000 yuan.

Qian Tong, a local resident in his late 40s, said he plans to spend retirement in his hometown of Yangzhou, a city in nearby Jiangsu Province, after having lived in Shanghai for decades. The idea came to him when his father, now 84, moved into a local elderly home four years ago. His parents had lived by themselves for about 20 years after retirement and hired part-time help to take care of them.

In 2015, his father decided to go live in a nursing home when his lifetime partner died. Qian and his elder brother agreed with his decision, and the family paid 350,000 yuan as an up-front fee for a 40-square-meter, one-room unit in Yangzhou Yaoyang International Elderly Apartment, which is run by the Red Cross Society of China.

Occupants can get a full refund if they live there for more than five years. Otherwise, the community charges them 9 percent a year on the deposit.

Qian’s father pays an additional 1,000 yuan per month for utilities and meal allowances.

Like Zide Apartment, Yaoyang apartment claims that residents are assured of permanent residence and can pass the right to live there on to other family members.

With 490 units of different sizes, the apartment is fully occupied, and prospective residents have to wait several months for a vacancy, staff said.

“We are still working and don’t have the time to take care of our father,” Qian said.

With intercity transport becoming ever more convenient, Qian said he might return home someday, given that it’s cheaper to go into a retirement apartment there than in Shanghai.

Currently, eight insurance companies have invested in a total of 29 elderly retirement communities in nearly 20 provinces, with a combined number of beds over 40,000, industry insiders said.

Aveo China Campus’s Yang said a survey found that more than 90 percent of aging parents would prefer to stay in their own homes. Traditionally, that was possible because younger Chinese took care of their elderly.

But times are changing. The long-time “family planning policy” means that most elderly have only one child to look after them. And many young people who hold stressful jobs to make ends meet don’t have the time or energy to care for aged parents at home.

Li said his sister, who is in her mid-60s, was very satisfied with the Zide Apartment after comparing similar communities, but she chose to wait several years to make a final decision because she likes living downtown.

When Feng’s siblings learned of her decision, they told her she was too young to move into a senior community. For most Chinese elderly, the decision to leave their homes comes only when they need assisted living.

However, Feng, said she is glad she chose to move when she did because vacancies in the best facilities are becoming harder to find.

“You have to make an emotional leap,” she said.

Xu Xian, a professor at the School of Economics at Fudan University, predicts that staying in one’s home will remain the popular option for seniors in the foreseeable future.

Taking heed, the government is doing its best to give them that option by promoting private old-age insurance to build a more comprehensive pension system and by developing community-based senior service centers in residential complexes. It is also looking at more in-home services for the elderly.