The Tudor-style Hudec’s residence on Panyu Road reopened last year after renovation with the Hudec Memorial Hall on the ground floor.

In 2010, the house tucked away from the often-jammed Panyu Road was dilapidated.

The 3-story Tudorbethan villa was built in 1930 as the second residence for Hudec’s family in Shanghai. After marrying Gisela Meyer in 1922, the young architect designed their first Shanghai home at 17 Luzerne Road (now Lixi Road). As his three children, sons Theodore, Martin and daughter Alessa arrived between 1923 and 1928, Hudec decided to build a larger home in the Columbia Circle region.

Nicknamed “foreign lanes” today, Columbia Circle was a popular late 1920s property spanning Columbia Road (now Panyu Road) and Amherst Avenue (now Xinhua Road) — both were among the Extra-Settlement roads. While the Chinese government was busy battling warlords from Jiangsu and Zhejiang provinces in 1924, the Shanghai Municipal Council constructed 13 roads outside the concessions which further expanded its territory.

At that time, growing demand for luxury houses with wide gardens pushed Western developers to turn their attention toward the less densely inhabited areas outside the settlement. With a nose for business, American engineer/merchant Frank Raven and his Asia Realty Company bought around 66,000 square meters of land in the extra-settlement neighborhood for high-end property, “Columbia Circle.”

The land was divided into more than 70 rectangular plots, each spacious enough for a garden villa.

Hungarian project manager Hugo Sandor employed his compatriot Hudec to design the villas, which were erected between 1929 and 1932.

“From overall planning to architectural design, Columbia Circle referred to the most trendy villa models in America’s west coast. ‘Columbia’ was named after Columbia Road while ‘Circle’ indicated an up-scale residential area developed by Americans or the social circle of the nearby American Country Club,” says Hudec researcher Feng Li, author of an upcoming book about Hudec’s residence.

The 2- and 3-story villas had five standard layouts. A customer could choose from 13 styles — an Italian, a Spanish, five British and six American ones. Each house could be changed according to individual needs.

“Is it possible to add further changes to the model I’ve chosen? Certainly, sir. You can have an extra bedroom or bathroom, we can convert the garage into a room, or do the opposite and separate it from the house, or you can expand the lodgings for the staff. Asia Realty’s brochures include a table with the prices for all the models and the additional costs of alterations to the standard design.

“Is it possible to modify the design if new needs arise during construction? Certainly, sir. Asia Realty’s architect, Mr Hudec, is glad to satisfy every need.”

The 1929 Christmas supplement of Shanghai Times also published a sketch of Columbia Circle, which had been designed “to suit every taste and purse.”

“With perfect timing, targeted customers and excellent design, Columbia Circle was selling great,” Feng says. “The company’s 1930 annual report showed profit had risen 165 percent compared with 1929. The land price in the neighborhood rose accordingly. The region turned from farmland to an idyllic garden for the international settlement. The earliest dwellers were mostly expatriates and elites, who were merchants, financiers, doctors, officials and fashion designers.” 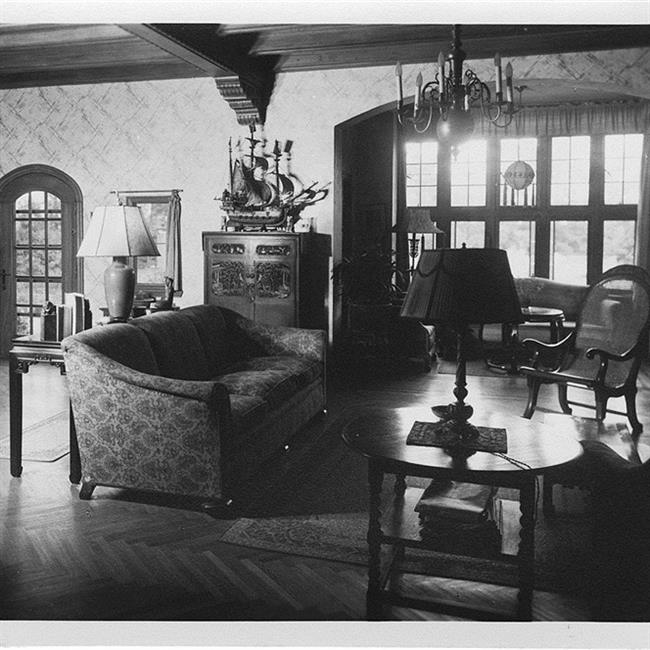 An archive photo of Hudec’s sitting room, which looks cozy, warm and tasteful.

Hudec’s home was a spacious, Spanish-style house that he later sold to Sun Fo, son of Dr Sun Yat-sen, who spearheaded the movement to end dynastic rule in China.

Hudec then chose a plot on the other side of Columbia Road and built the smaller, traditional Tudor-style home possibly according to his wife’s wishes.

This is a white-wall building highlighted by contrasting darkwood half timbering frames. Two towering red-brick chimneys stand at each end of the sloping roof that is covered by beautiful slate tiles. Three sets of Gothic windows and a round arched door are on the ground floor. A big garden lies to the south.

According to Hudec’s daughter, Alessa de Wet, they lived in the house from its completion until the autumn of 1938, when it was rented to a German consul. By then Hudec felt the family did not need so much space as his two sons were in boarding school in Canada and his in-laws were about to retire to Switzerland. They moved to an apartment inside another Hudec building, Hubertus Court (today’s Jinjiang Metropolo Hotel).

“The years in the Tudor-styled house were very pleasant. I remember the large garden parties my parents hosted for the Austro-Hungarian community every summer,” recalls Alessa, who always wore a traditional Hungarian dress sent by one of her aunts in Budapest for these parties. “It was an open house with people coming and going all day long, some playing croquet, others tarot — a Hungarian card game — and many just socializing or discussing the latest news. One of them was a rather unusual man, Lincoln Trebitch, who one year came as a rabbi, then as a Buddhist monk and another time as a Catholic priest.” 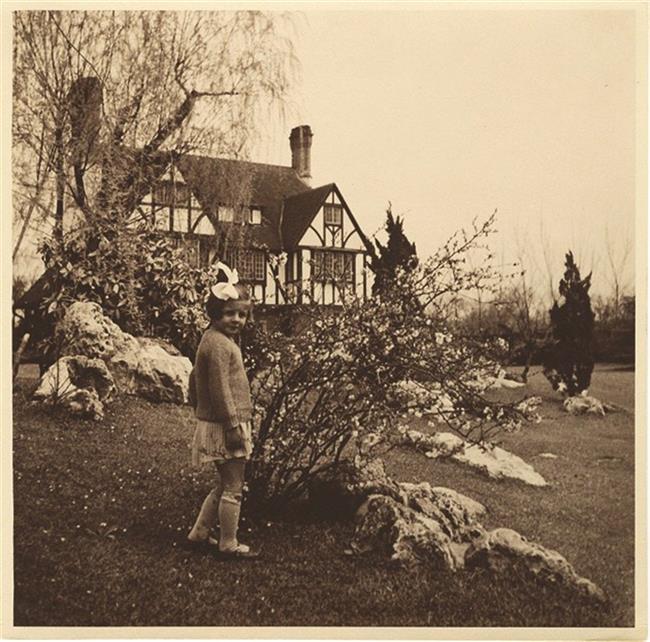 An archive photo of Hudec‘s daughter Alessa de Wet in the garden. She had so many fond childhood memories, which mirrored that of British writer J.G. Ballard.

In addition to parties and events, the Tudor house was also a paradise for Hudec’s kids, who lived in the attic.

“My brother Theo loved to take a pillow and slide down the curved staircase from the attic, sometimes when he had enough speed he would shoot all the way to the main stairs and down those as well,” Alessa says. “He often played with me at the bottom of the garden where we had swings, a sandbox, and the boys had a small wooden house built on stilts which they called The Fort.

“My room was above my parents’ room and behind it was the bathroom, above which there was a dove cote. I enjoyed hearing the birds coo. They were my father’s and he loved to see his pigeons circle as he filled their feeder every morning before being driven to his office on Yuen Ming Road,” she adds.

Alessa’s childhood mirrors that of Shanghai-born British writer JG Ballard, who was two years younger than Alessa and also grew up in his wealthy family’s garden villa at 31 Amherst Avenue, which still exists today.

“He (Jim) was glad to see that Amherst Avenue was filled with the cars of Europeans leaving for their Christmas parties. All over the western suburbs people were wearing fancy dress, as if Shanghai had become a city of clowns,” Ballard wrote in his semi-autobiographical novel “Empire of the Sun,” which later was made into a 1980s Hollywood movie directed by Steven Spielberg.

Wars changed the fate of both Alessa and Ballard. Business declined sharply at Hudec’s firm after the Japanese invaded Shanghai and the family left for Europe in 1947. Alessa now resides in Canada.

In streets full of chaos and corpses, young Ballard was separated from his parents and imprisoned in the Japanese concentration camp in Longhua from 1942-45. These experiences are also detailed in “Empire of the Sun.” They both remember life in Columbia Circle.

After 1949 the Hudec House was used by a middle school and modern buildings mushroomed around this country villa. Following a renovation by Chinese investors, the ground floor of the Hudec House reopened on January 8, 2013, the 120th anniversary of Hudec’s birth, as Hudec Memorial Hall.

Alessa came to Shanghai to participate in the opening ceremony. She said she was glad to see her old home used to commemorate her father, adding it was sad the former lush garden was gone, the land of which was covered with buildings due to the “phenomenal and amazing growth of Shanghai.”

No wonder Ballard wrote in his autobiography “Miracles of Life,” “Nevertheless, Shanghai struck me as a magical place, a self-generating fantasy that left my own little mind far behind.” 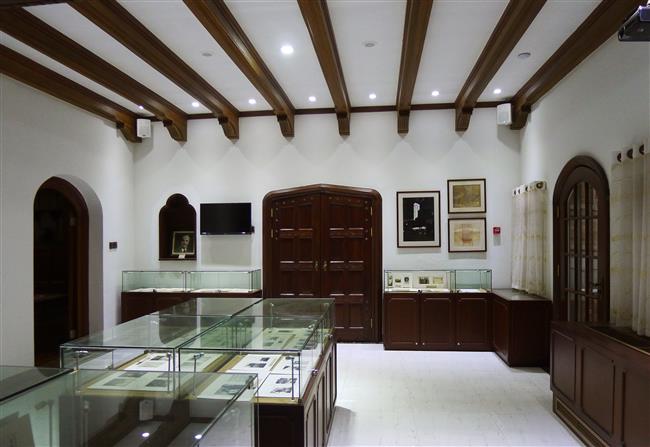 Laszlo Hudec’s former residence is now the Hudec Memorial Hall, and also an educational base for the Architectural Society of China.

Tips: The memorial hall opens to public on Tuesdays (1:30-4pm) and Sundays (9am-12pm, 1:30-4pm). You can also wander around Panyu and Xinhua roads to feel the ambience of yesteryear’s Columbia Circle life.