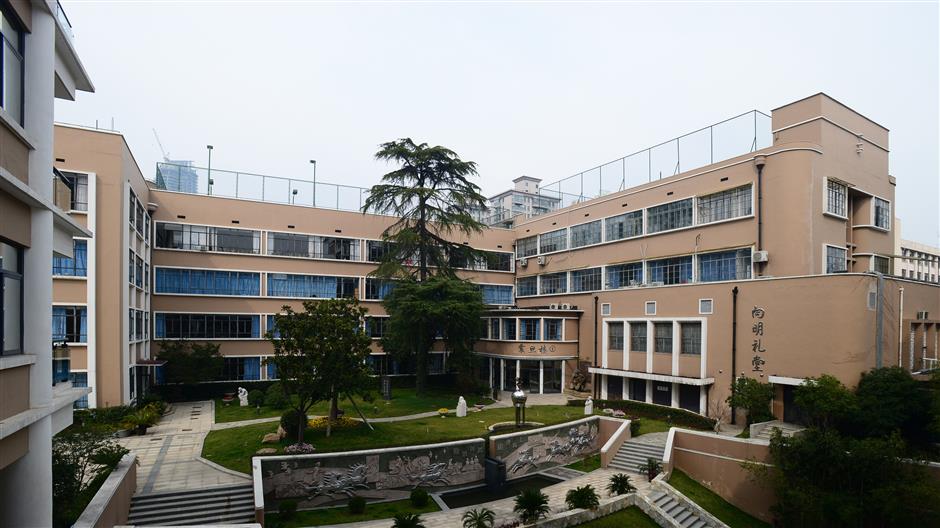 Xiangming High School is where the Aurora College for Women was located in the 1930s. 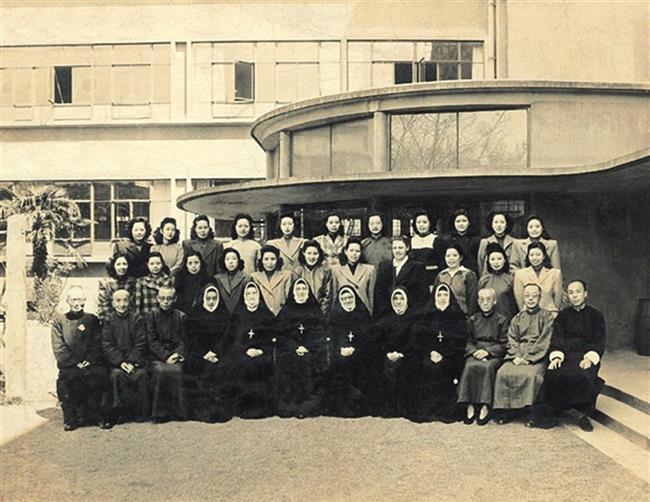 An archive photo of American nuns and Chinese students in front of the western building.

In the late 1930s, L.E. Hudec designed a Gothic building for Aurora College for Women that mirrored his previous McTyeire School for Girls. But he later changed the plan to an entirely modern structure that resembled his later masterpiece — the Green House.

Italian architectural historian Luca Poncellini attributes the change to the central building’s function. The space initially meant to be a church was turned into a gymnasium/auditorium.

“In Hudec’s design codes, a church shall be easily recognized as a church, while a gymnasium shall not look like a church, but rather as a modern facility,” says the scholar who authored Hudec’s biography.

“Nevertheless, he designed a huge, but unadorned and minimalistic cross-shaped architectural symbol in order to represent the religious orientation of the Aurora institution, a very similar purpose of the giant ogival arch designed for the True Light Buildings on the Bund, which was run by the Jesuits,” he adds.

As one of the few women’s colleges in China, the Aurora College for Women — today’s Shanghai Xiangming High School on Changle Road — was founded in 1926 by Mother Superior C. Nourry of the Convent of Sacred Heart. With American nuns as deans and educational directors, the medium of instruction was English.

The college had two buildings. The eastern section was the original school building of the Convent of Sacred Heart. Hudec designed a new building in the west, which was connected to the eastern building on the third and fourth floors. Shaped like a huge “U,” the new building opened to the south and formed a vertical angle to the old one.

When Hudec’s new building opened on April 29, 1939, the English-language newspaper Shanghai Sunday Times called it “a splendid structure” and “a functional design that expresses clearly without unnecessary embellishment the inner function of the building.”

“Upon entering the lobby, one is struck by the clear, logical appearance of the interior. Air, sunshine, rounded-off corners (therefore, cleanliness), are the keynote throughout the building,” the report said.

The ground floors contained the gymnasium — which could be converted into an auditorium — the reading room, library, domestic science room, reception, dining rooms and kitchen. The auditorium, which had three sides opened to the garden, was especially pleasing with its restful proportions.

On the next two floors were about 24 classrooms and the teachers’ rooms. The top floor housed the student dormitories. In addition, the building was equipped with biology, physics and chemistry laboratories, an art department and studios.

The facade boasted a modern style with grand glass windows and curved corners, giving an elegant look to this functional building. 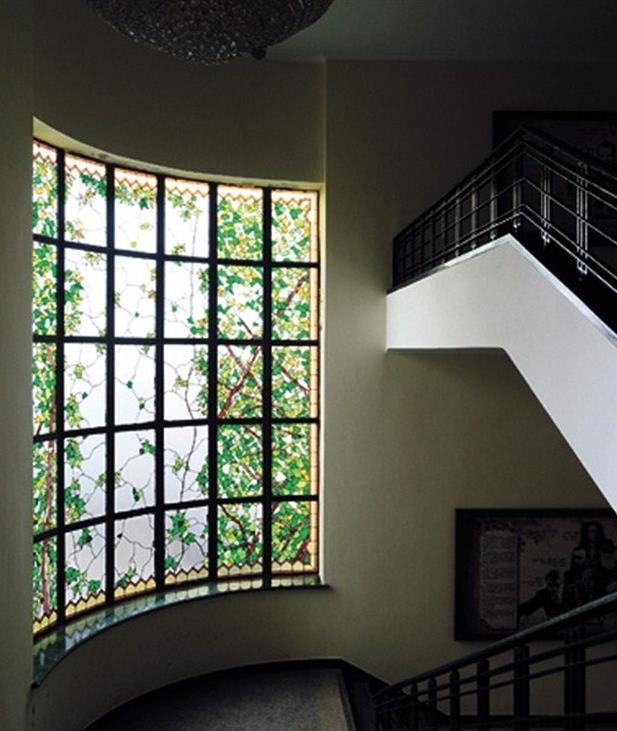 He also admired Hudec’s selection of materials to suit different owners and functions.

“For a luxurious residence like the Green House, he used expensive, customer-made glazed tiles. But he only whitewashed the facade of the college in an economic way that gave a simple, plain effect, fit for a campus. That’s why he was always loved by his customers,” Zou chuckles.

In Hudec’s archives, Italian scholar Poncellini found a newspaper article that reported the tragic death of a Chinese notable, Lo Pa Hong or Lu Bohong, who was assassinated on December 30, 1937.

Born in 1895 to a Christian family, Lo was an influential founder/director of religious organizations, colleges and hospitals that widely cooperated with other Catholic and international charity and educational organizations.

Hudec’s late 1930s commissions were largely from two important Catholic organizations — the Aurora University founded in 1903 by the Jesuit fathers of the Sikawei Mission and the Sacred Heart Convent that organized education programs of Chinese youth. Both had benefited from Lo’s donations for the construction of educational facilities.

The aim of the Aurora College was to train Chinese girls for their lives’ work as Christian women, which was to “give them the instruction suitable to their sex, to develop their faculties, to form their character and teach them to fulfill their duties in the world. A practical knowledge of their religion, moral training and education is designed more for womanly than for professional excellence, and it is remarkable,” the Shanghai Sunday Times said at the time.

Qian Zhongshu (1910-98), a renowned Chinese literary scholar, had taught here in 1941. His students included Yang Bi, sister of his famous writer wife Yang Jiang. From 1943 to 1945, the campus was occupied by the Japanese as a camp for the British and Americans.

Along with Aurora University, the college was later merged with Fudan and Jiao Tong universities. Hudec’s ultramodern building has been part of today’s Shanghai Xiangming High School, one of the city’s top schools, famous for its creativity-oriented courses.

Some American nuns of the former Aurora College for Women left Shanghai for Taiwan in the 1950s, where they opened a Christian school for girls under the name of Sacred Heart.

“They visited our campus years ago to trace their own history and were happy to see an archival photo of Chinese female students and American nuns in front of the western building. They also have the same picture in their archives that proved the same origin of our two schools,” says teacher Zhou Jianshuang of Shanghai Xiangming High School, adding that two 19th-century pianos of the former Aurora College were still preserved on the campus.

During the 2010 renovation, architect Zou’s team has maintained Hudec’s original staircase and terrazzo flooring. They cleaned off the later repainted pink color to revive Hudec’s original cement mortar facade. When adding a new building on the campus, they designed an open veranda in the north, which allowed students to admire the south facade of Hudec’s building and to respect the school’s history.

“No matter on the layout or the facade, Hudec boldly adapted the ideas of modern architecture, which reminded of the Bauhaus campus or Swiss-French architect Le Corbsier’s new buildings in many ways,” says architect Guo Ge from Shanghai Real Estate Science Research Institute, who headed a survey of the building before its 2010 renovation.

“I was amazed by Hudec’s refined design while counterdrawing his blueprints,” she recalls. “He’s a real master. The free-flowing space was perfectly arranged. The doors were designed with groves so that they merged into the walls and became invisible no matter when opened or closed. Even a small facility room on the roof was graced by a long, uninterrupted glass window and a pair of doors and staircase in great proportion — so beautiful.”

But Guo found it a pity that an additional building was added outside the auditorium in the 1960s, which greatly changed the college’s signature modern facade.

Another Chinese architect, Zou Xun of Shanghai Xian Dai Architectural Design Group, noted similarities between the college building and another Hudec work of the same period, the Green House.

“Both buildings were embellished by numerous curves and both use Hudec’s preferred ribbed boards, which saved the clear height of the building,” says Zou, who participated in renovating the Aurora College and the Green House. “Some architectural details also mirror each other, such as the simple-cut cast-iron decoration and the spiral-shaped rain spout.” 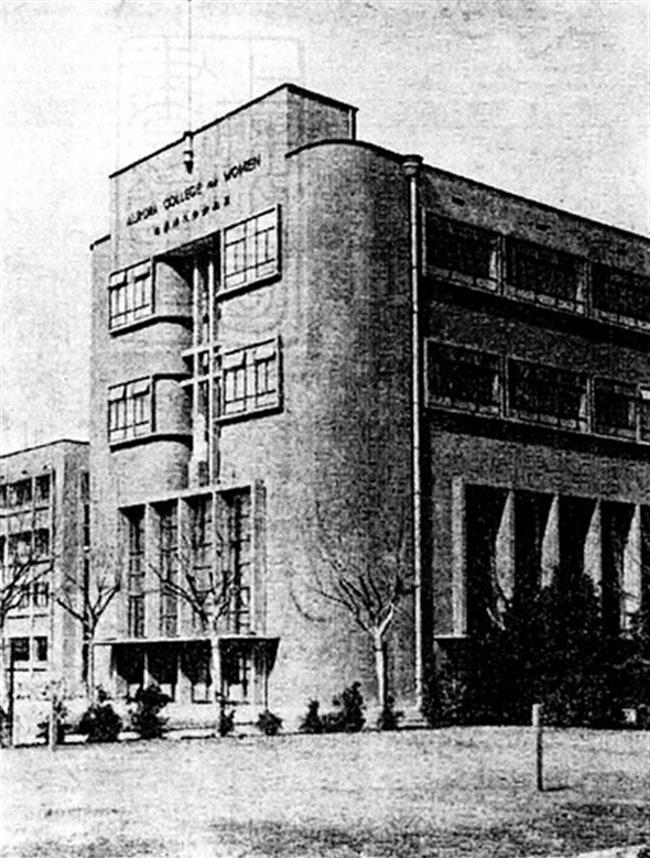 An archive photo of the nicely designed fa?ade of the auditorium.

Back to the opening day in 1939, W. Hou, president of Aurora College, cut the ribbons stretched across the doors leading to the large auditorium. Around 500 people filled the auditorium to listen to the short speeches by Hou and Pere G. Germaine, the rector at Aurora University, after which the building was thrown open to general inspection by the guests.

The various departments of the college, which offered a full curriculum in the arts and sciences, had arranged exhibits of work done by students who were at hand throughout the afternoon giving explanations to interested spectators. After inspection of the building, guests were invited to the roof garden where refreshments were served.

“The official opening was arranged with a view to permitting parents to acquaint themselves with the Aurora College, which is regarded as the finest in China and may compare most favorably with the highest institutions of leading in foreign countries,” the North China Daily News reported.

The report noted that the name “Aurora” is a Latin word meaning “rise of dawn,” which was adopted around 1900. Coincidently the name of the high school that is using Hudec’s modern building today, “Xiang Ming,” stands for “toward brightness.” 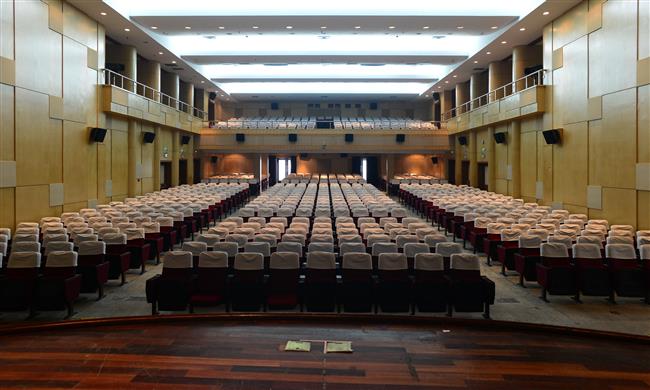 The interior of the auditorium that housed the building’s opening ceremony in 1939.

Tips: The school is not open to the public. But the outlook can be appreciated from Changle Road.