The Normandie Apartments, or the Wukang Building, are considered an architectural treasure in Shanghai. It still looks modern today.

The two masterpieces were both listed in the 99 symbols as “reasons for loving Shanghai” last year when Hudec was voted as a “Shanghai Symbol” by a million Shanghai netizans. Among them, the Normandie Apartments are considered an architectural treasure and still looks modern today.

“The Normandie Apartments was Hudec’s signature work when working with the American firm R.A. Curry. It was called the ‘little Flatiron’ in reference to the famous New York skyscraper,” says Italian architectural historian Luca Poncellini, author of a biography about Hudec.

The International Savings Society was founded in Shanghai in 1912 by several French merchants including Jean Beudin, whose residence on Fenyang Road was also designed by Hudec.

According to the book “Men of Shanghai and North China” published in 1933, Paris-born Beudin arrived in Shanghai on September 6, 1908 and until 1912, when the International Savings Society was started, was a partner in the firm of Cohen & J. Beudin. He had military service with the 16th Regiment of Colonial Infantry. He is a “Chevalier of the Legion of Honour.” 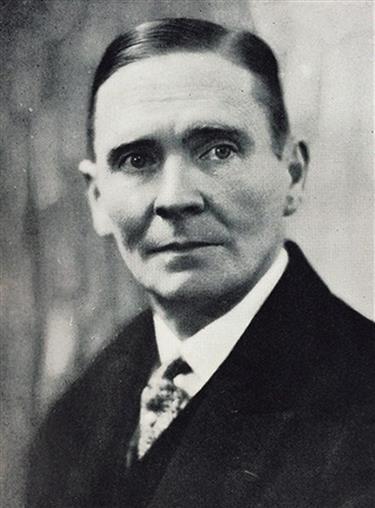 Archive photos of the French merchant Jean Beudin, founder of the International Savings Society that built the building.

With its hugely successful lottery-linked deposit account, bank accounts soared from 191 in 1914 to 131,800 in 1934, according to Wu Zhiwei, a historian with the Shanghai History Museum.

“In 1934 the society’s savings deposits accounted for more than one-fifth of all savings in China. They then invested the money in bonds, foreign currencies and real estate, including the Picardie Apartments (today’s Hengshan Picardie Hotel), the Gascogne Apartments and the Normandie Apartments,” Wu says.

The building’s name has frequently led to speculation about its origin. Many people have assumed it had something to do with the D-Day Battle of Normandy during World War II, but that’s impossible since it was built 20 years before that fateful day.

The Normandie Apartments are in a great location and the building stands out in the area. The triangle lot is located at the intersection of five streets and provides an open view. The steep, sharp-headed building suits the peculiar shape of the plot and its appearance symbolizes a flat-iron or powerful warship.

The eight-story building has a French Renaissance style and is known as the first in Shanghai to have balconies.

The external walls on the ground and second floors are coated with artificial stones while the floors above feature red bricks. An ashlar surfaced on the top floor corresponds with the base. The cantilevering balconies and the parapets form eaves with double parallel corners. The three sections of balconies form a vivid waistline on the facade.

Hua says other noteworthy architectural details include the carved stones in every arch of the ground floor, the vase-shaped stone balusters on the balconies and the classical pediments on the window lintels.

Hudec also receives high marks for designing two entrances on the northern facade on Route Ferguson (today’s Wukang Road) to let in more light and air into the rooms. 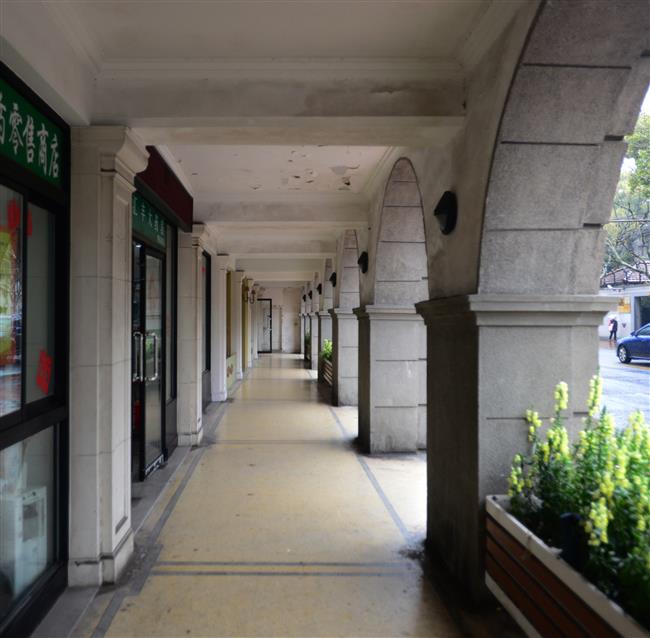 An arcade of shops on the ground floor is an additional feature to the building.

A 1920s English newspaper describes the building: “(It) contains 60 apartments, some with only one room besides kitchen and bath and others with hall, two bedrooms, living rooms, dining room, kitchen, etc, more in keeping with a family apartment.”

It also has three elevators and several fire staircases. The two elevators in the entrance hall still show the floor number with pointers.

The newspaper adds: “Besides being of fire-proof construction a special fire-proof system makes the building independent of outside assistance in case of fire, there being five hydrants, sufficient to reach every part of the building, and on the roof is a tank of 5,000 gallons of water in case the city mains should not prove adequate to the demand. An arcade of shops on the ground floor is an additional feature.”

Historian Wu says the building was one of the city’s earliest high-end apartments and was initially leased to senior employees of foreign companies such as Siemens.

“During World War II, two thirds of the rooms were empty because the former tenants, mostly Britons and Americans, had either returned home or were put into camps by the Japanese army.”

After the war, the Kuomintang government purchased the International Savings Society’s properties around 1946. Senior Kuomintang official Zhao Zukang, mayor of Shanghai before October 1949, lived in one of the building’s suites. Famous Chinese artists including actor Zhao Dan and actress Qing Yi also lived in the building at one time.

Route Ferguson was renamed Wukang Road in 1943 and the Normandie Apartments became known at the Wukang Building in 1953.

During the “cultural revolution” (1966-76), this building earned the unfortunate moniker “The Shanghai Diving Pool.” As one of the few highrise buildings in western Shanghai, a number of people ended their lives by jumping off of it.

The building was renovated years ago along with Wukang Road, which was named a National Historical Street in 2011.

The firm cleaned the facade, restored the brickwork and designed nice frames to hide the air conditioners. The signature arcade and the well-designed entrance hall have both been restored.

Each long corridor in the Normandie Apartments is like a gallery exhibiting a distinctive Shanghai way of life.

Professor Hua says Hudec had designed at least two other projects for the International Savings Society, including its headquarters on Avenue Edward VII (which was demolished when the Yan’an Elevated Road was built) and 22 residences on Rue Ratard (today’s Julu Road).

Compared with the Normandie Apartments, the 22 American-style residences in the shape of a big “L” are hidden down lanes and are relatively unknown.

“As the Rue Ratard project was one of Hudec’s earliest commissions in Shanghai, he was sending detailed sketches and descriptions on the back of some hand-made postcards to his father, plus some small photographs,” says Poncellini, who had discovered a postcard dated April 1920.

It showed 22 villas with detailed explanations in the accompanying text. He also found many family letters filled with complaints by Hudec about his early Shanghai career.

“I won’t be a real architect in Shanghai as I had imagined at the Technical University, although I build more than I would ever have thought ... Now, when with a move-ment of the pencil I direct thousands, I don’t feel the same inner peace as when I drew those little chapels ... The professionals around here have a conception of architecture like the average mason at home. Architects that have graduated from university have no idea what the Baroque is, so how can you talk about the pictorial style with them? Alright, a talented person does not need to know art history, they make art history, and they are talented in copying but they cannot find the appropriate proportions even by mistake,” Hudec wrote in one letter.

The “flatiron” edifice looks like a delicate, sophisticated mini city with so many long, zigzagging passageways.

It is quiet but filled with traces of life. Each long passageway seems to be a gallery exhibiting a distinct Shanghai way of life. There are big potted green plants, motorbikes covered by worn raincoats, an antique Chinese table and a rainbow of clothes hanging on a bamboo pole. Hudec’s choice of a beige-toned mezzanine floor has endured and still looks nice.

At dusk on a spring day, a dash of yellow light leaks from one of the top-floor windows. The warmth and depth of this magical city can be felt at moments like this.

The Normandie Apartments proudly and properly stand at the intersection of Huaihai and Wukang roads.

More than 90 years ago, a homesick Hudec drew blueprints for this elegant building. Did he know it was destined to become a symbol of Shanghai one day? 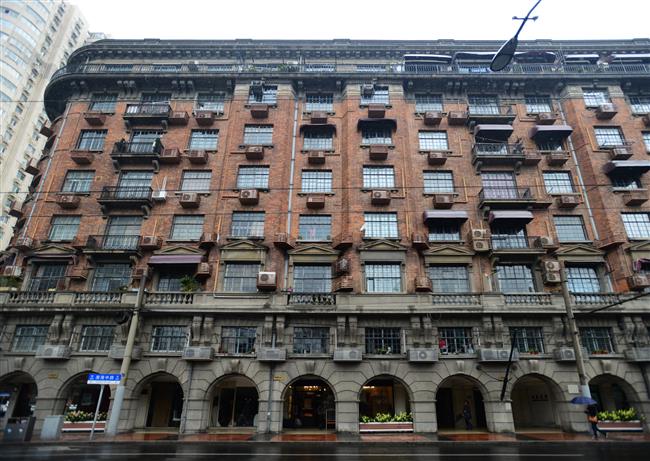 The external walls on the ground and second floors are coated with artificial stones while the floors above feature red bricks.

Tips: The appearance and the entrance hall can be appreciated. The suites are not open to the public. I suggest visiting the Beudin’s Residence at 150 Fenyang Road (today’s Ambrosia Restaurant) and the lesser-known American-style villas, which are now No. 1 to 10 on 852 Julu Road and No. 868 to 892 Julu Road. It's a lovely area.