The Sun: the show window of China 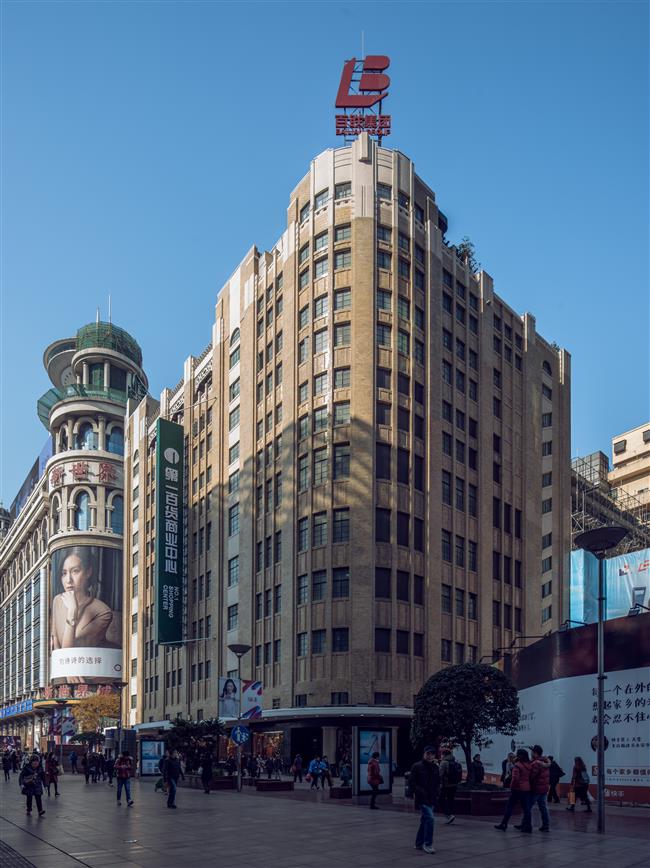 The Sun, which opened in 1936, was the last of the four big Chinese-owned department stores on Nanjing Road ─ the other three being Sincere Co, Wing On and Sun Sun. It lived up to its Chinese name, Daxin, or “big and new.” The store was fairly big in terms of size and boasted the most modern facilities among all the four stores.

The building, now housing the Shanghai No. 1 Department Store, just reopened after a half-year renovation, which is part of a bigger redevelopment plan to turn the area into a classy Shanghai No. 1 Shopping Center with all the old Shanghai elements.

“Back in the 1930s, The Sun was known for its uniqueness — the escalators and the basement,” says Zhang Yaojun, a researcher at the Shanghai Archives Bureau.

It was owned by Chinese merchant Choy Chong, who had business experience in Australia and set up the parent Sun Company in Hong Kong and Guangzhou.

The 44.5-meter-high store featured a shopping area of nearly 30,000 square meters and had entrances on three roads. When the nine-story building was nearly completed in October 1935, The China Press reported that the founders had christened the store as “The Show Window of China.”

“A number of innovations will be introduced. Outstanding, perhaps from the viewpoint of the public, will be the introduction of escalators. The Sun Company thus claims the honor of having introduced the first two passenger escalators in China,” the report noted.

“The two Otis escalators, imported from the United States, were so novel in 1936 that many locals thronged to the store simply to experience it. The Sun started selling tickets for a ride which would be deducted from any purchase. It was estimated that 48,000 people visited The Sun on the opening day and the escalators became the best advertisement that ensured good business,” says Zhang. 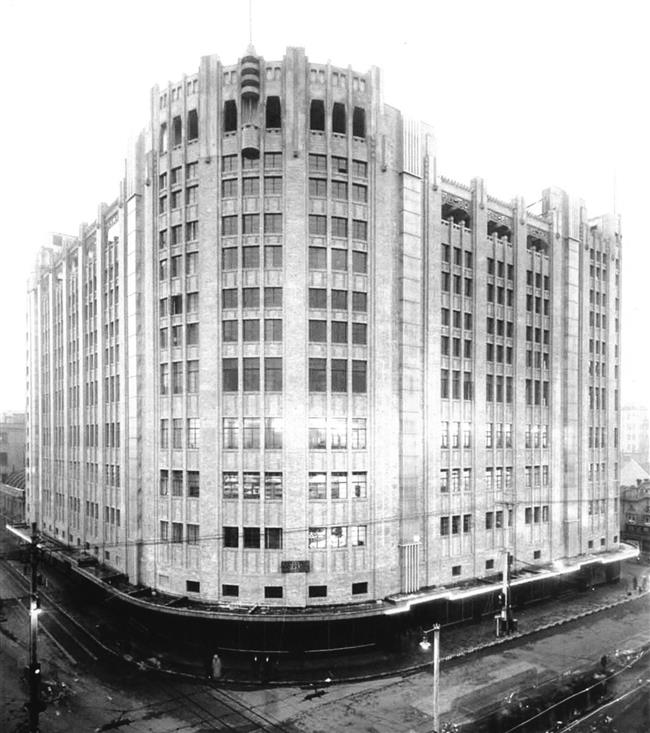 An archive photo the The Sun Department Store 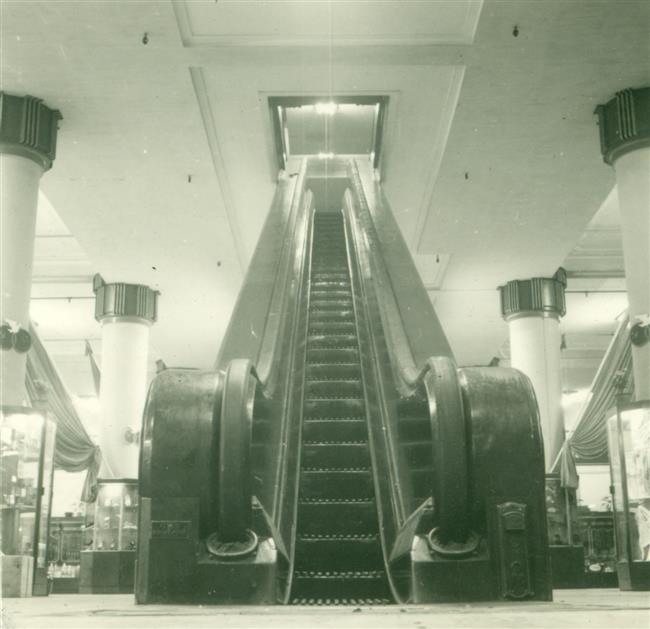 Back in the 1930s, The Sun Co introduced the first two passenger escalators in China.

He says that a shopping floor in the basement was another innovation ─ the first of its kind in China.

In the 1930s, the basement and three floors including the ground level served as shopping areas. The third floor was used as Taipan’s office and other administration purposes. The upper floors had a restaurant, a theater, an amusement park and a roof-garden tea house, pretty much like today’s shopping centers where customers could not only buy products, but also enjoy food, beverage as well as entertainment.

As the youngest of the lot, The Sun was designed in modern style with Art Deco and Chinese ornaments. “The simple-cut facade is graced by vertical lines and yellow glazed tiles,” says Qian, adding that similar transition can also be seen on the Bund. “The Sun is a punctuation of the transition of Shanghai modern architectural styles on Nanjing Road.”

The architect of the building was a big Chinese firm Messrs Kwan, Chu and Yang, which also designed the Continental Bank at 111 Jiujiang Road (now the office of Shanghai Trust) in Art Deco style. The contractors, the Voh Kee Construction Company, were also behind the Park Hotel.

The 1935 report noted that the owners had chosen a simple design and sacrificed the ornate in order to “develop the best in service for the buying public.”

The management team set aside special sections of the store for display and sale of handicraft commodities to meet the demand of the ever-increasing number of tourists because “no country in the world produces a greater variety of artistic handicraft than China.”

“This permanent exhibit of handicraft art objects will be of special interest to all travellers coming to or passing through Shanghai, the most cosmopolitan city of the Far East, and which boasts of having the tallest buildings in Asia,” the report said.

The Sun prided itself in “community service.” The majority of the salesmen and saleswomen behind the counters spoke English. For newcomers to the city, the information concerning both the merchandise sold in the store and objects of interest available elsewhere in Shanghai was offered. 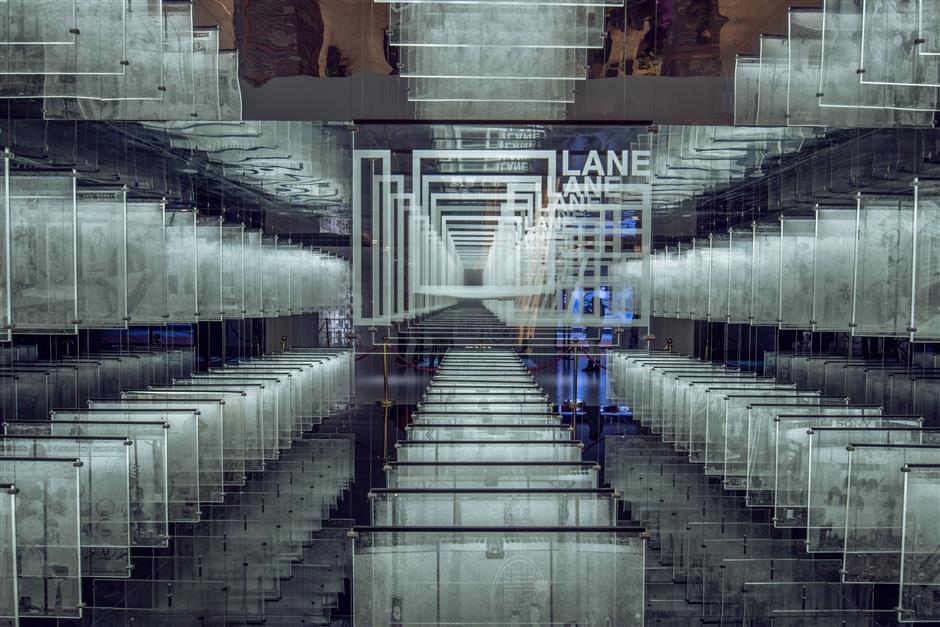 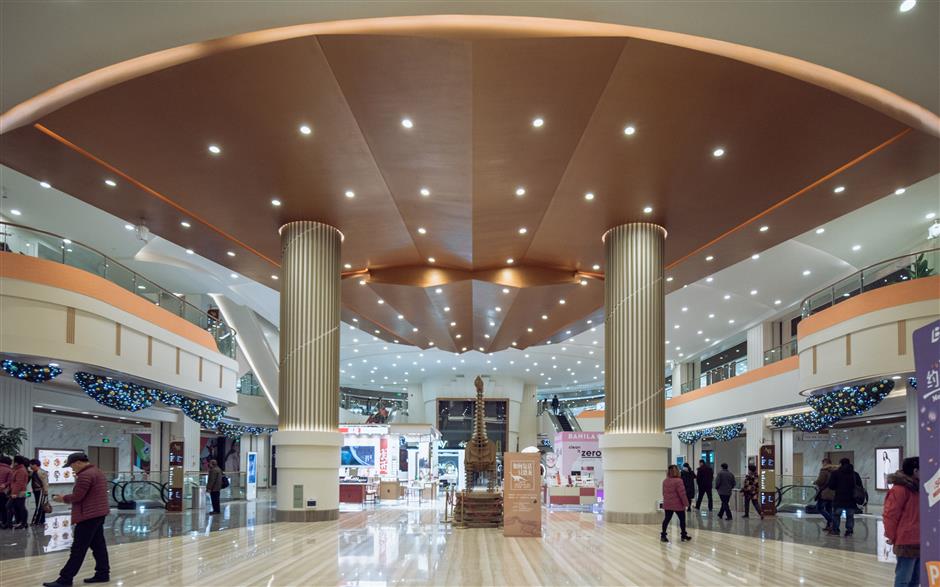 The renovated ground floor of the Shanghai No. 1 Shopping Center 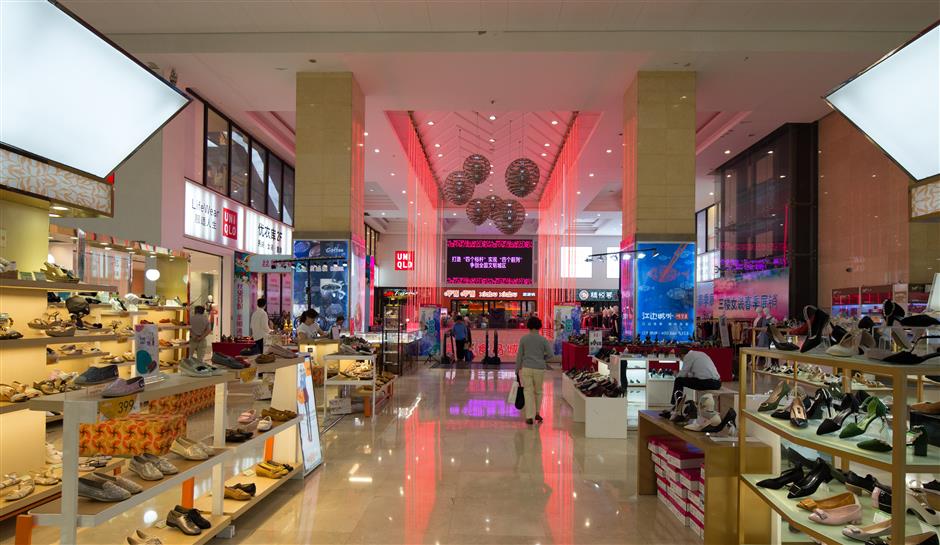 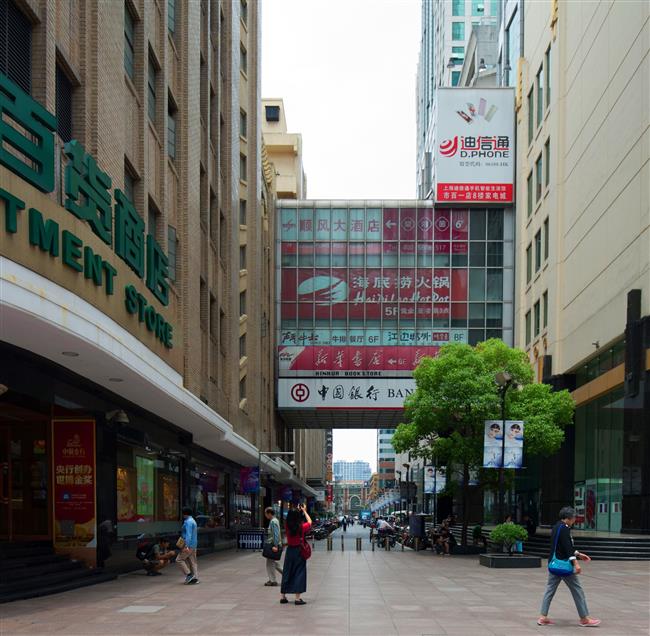 A glass dome and a gallery are under construction to link the Shanghai No. 1 Shopping Center with adjacent structures. 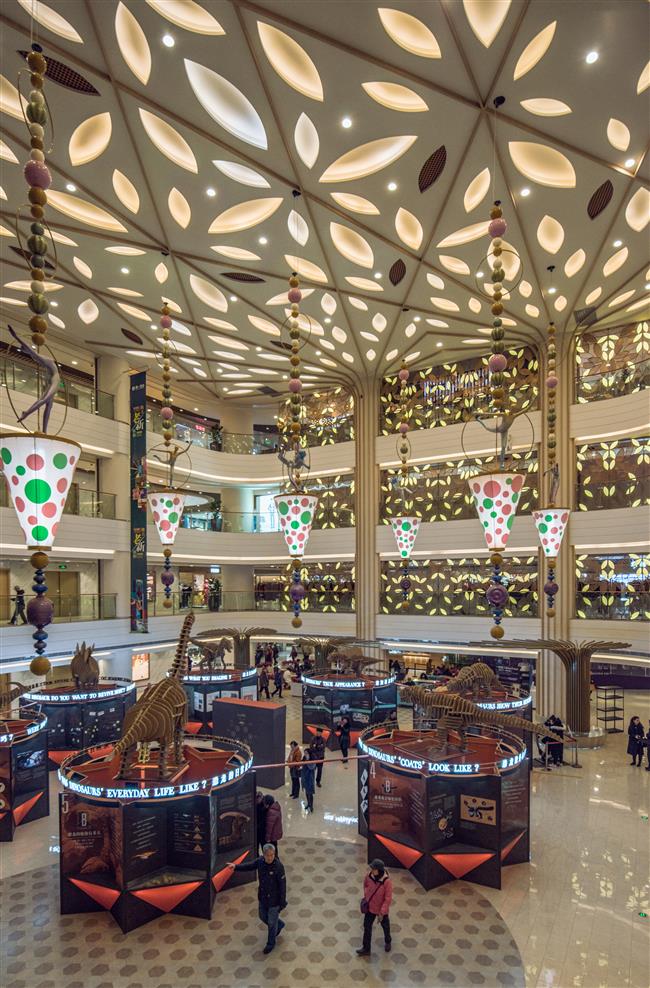 In 1951, The Sun served its time and stopped business activity. Another state-owned emporium, Shanghai No. 1 Department Store, moved into the building in 1953.

The store lived up to its “No. 1” tag. In the 1980s and 1990s, it earned fame as “the largest shopping mall” and made top-selling records among all Chinese department stores for more than a decade. In 1993, the No. 1 store was listed on the Shanghai Stock Exchange. In 2008, the store grew further by building an adjacent new building.

In June 2017, the No. 1 store closed its door for the first time for redevelopment. The highlight of the refurnishing plan is a glass dome and a gallery in the air which connects with the Sun Sun Co, the annex building and the adjacent Oriental Department Store. The glass dome is scheduled to open later this year. The idea is to turn the traditional No. 1 department store to a modern 120,000-square-meter shopping center comprising three old and new buildings.

“With strong competition from modern shopping malls, we want to win more young consumers through this redevelopment that will add old Shanghai elements into the interior design, such as alleyway houses and plane trees,” says Zhuang Qian, deputy CEO of Shanghai No. 1 Shopping Center.

Lu Hongbing, the shopping center’s office director, found the project did bring in younger customers to the 82-year-old No. 1 store when it reopened last month.

“We have well-known cosmetics counters and trendy cafes and tea houses that appeal to young customers. The idea is to let them enjoy and experience the place. The project has restored the original grand columns, and the newly added LED lights bring out the beauty the facade,” says Lu, who has worked at the store since 1993.

Colorful posts hype the new motto: “Same place, new joys.” Efforts are being made to turn the 1936 building again into a “big and new” store in a new era on Nanjing Road.

Tips: The store is holding an exhibition themed on old Shanghai on the seventh floor that includes old Shanghai products and interactive traditional games that were popular in local alleyway houses. 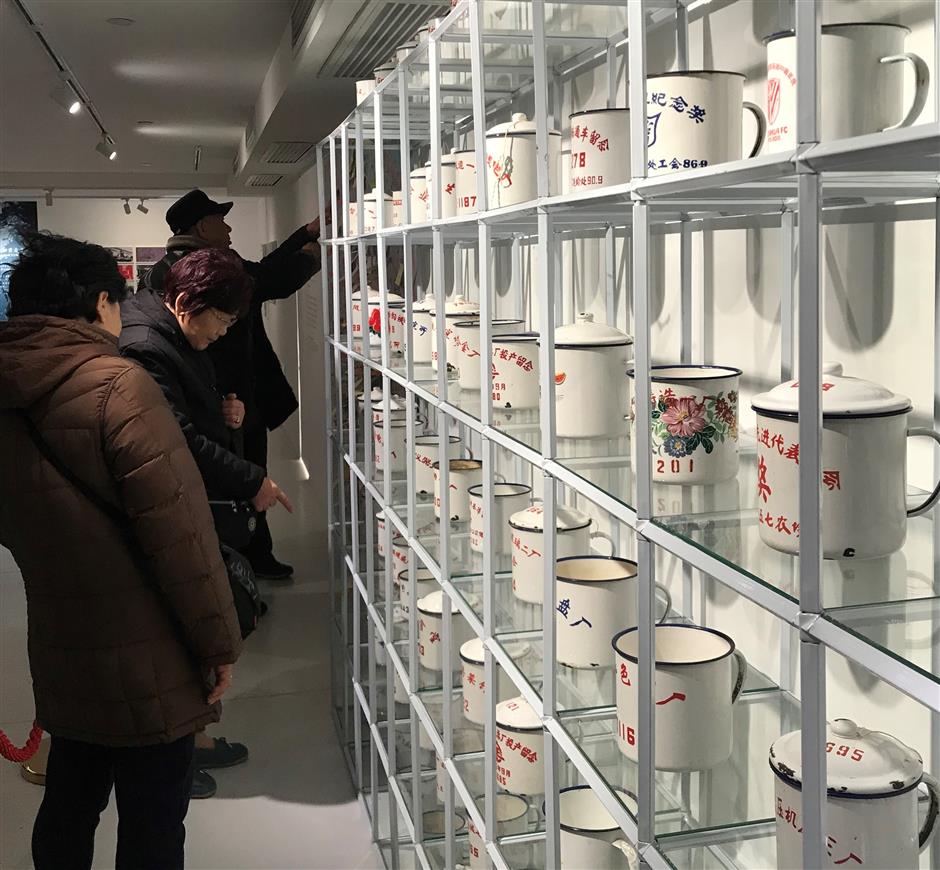 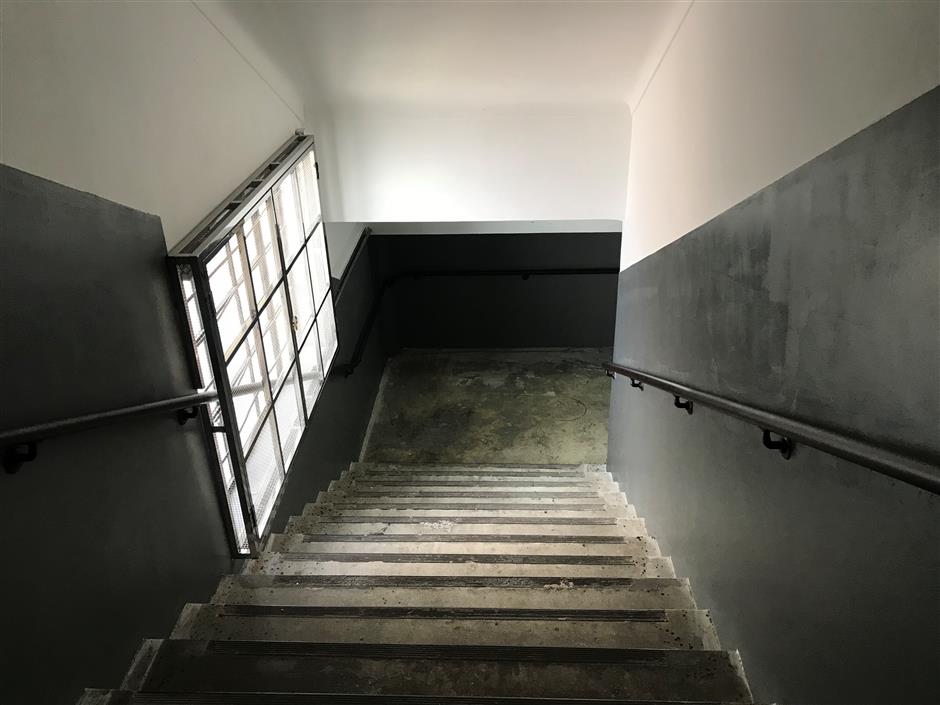 The original staircases have been well preserved. 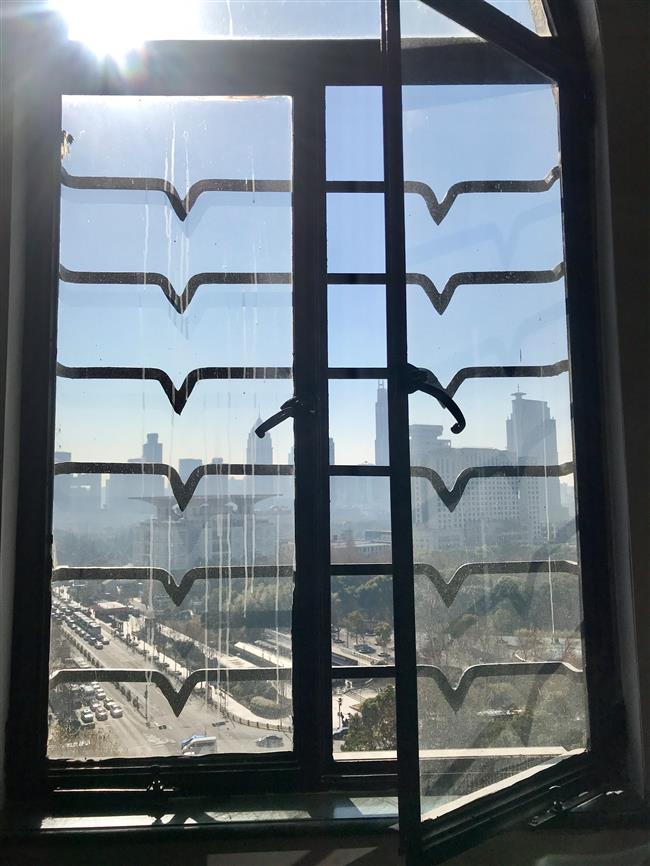 The original steel window has also been preserved.