Dancing lions and dragons: the soul of China 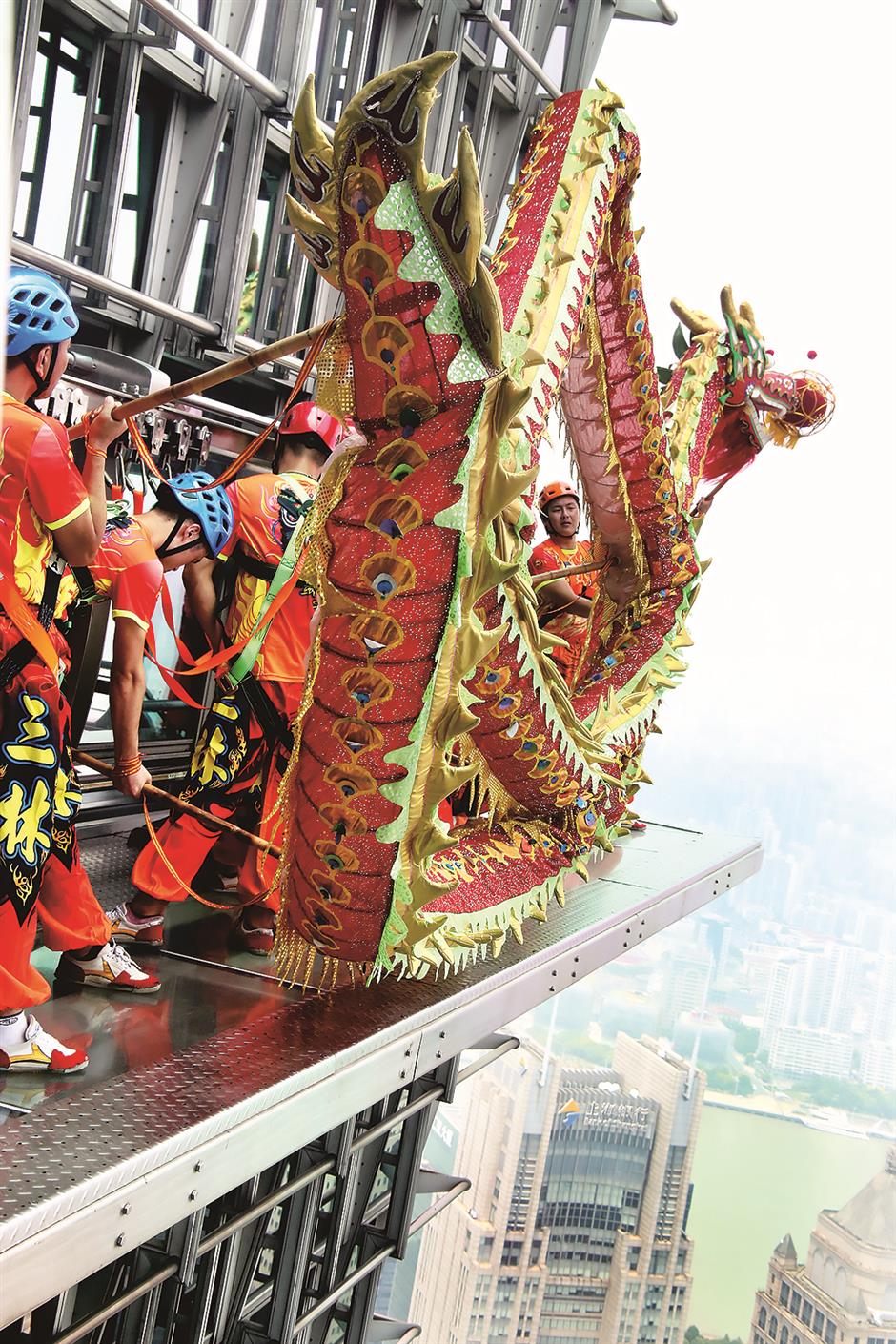 Sanlin Town in the Pudong New Area has the best lion dancers in Shanghai. The team once performed at a height of 340 meters on the outdoor balcony of a high-rise building in 2016, making a world record of the highest lion dancing.

At any Chinese celebrations such as the Chinese New Year, temple festivals, weddings and other auspicious occasions, the lion dance or dragon dance — or both — are always performed to bring good luck and prosperity.

For Chinese, at home or abroad, the two dances are considered prominent symbols of the unique identity of Chinese culture.

The dragon dance is performed by a team of a dozen or more dancers.

They carry a colorful dragon prop on poles. The prop consists of a dragon head and a dragon’s body, which is usually divided into nine cylinder-shaped sections made of wood or bamboo.

The sections are connected and covered by fabric so that the dragon’s body becomes very flexible to make all kinds of moves in performance.

There’s also a supporting prop called “dragon pearl,” a volleyball-sized fabric ball affixed on the top of a pole.

Accompanied by a group of musicians playing drums, cymbals and gongs, the performance begins with one dancer swinging the “dragon pearl” up and down and from side to side in front of the dragon head.

Then, the dancer holding the dragon head moves in tune to the loud music and starts to chase the “dragon pearl” in an attempt to capture it.

But he never does.

Other dancers follow the dragon head dancer in coordinated steps to lift, dip, thrust and sweep the dragon body, mimicking the movements of an undulating serpent.

Sometimes, the performance includes two dragons both chasing the same dragon pearl, which is called “two dragons fighting for the pearl,” or shuanglong xizhu.

The dragon prop is at least 18 meters long, but some are as long as 100 meters with a body consisting of dozens of sections.

The dancers are mostly young men, but there are occasionally female dragon dance teams.

All dancers have to train for at least six months to learn the basic moves and to build up their strength and stamina.

Many of them also practice martial arts in order to improve their stamina and agility.

According to historical records, the dragon dance first appeared in China more than 2,000 years ago and was closely associated with the ancient Chinese tradition of worshipping dragons.

The dragon, phoenix, kylin and tortoise are the four most auspicious creatures in Chinese culture.

The dragon usually has a big head with ox ears, tiger’s eyes and stag’s antlers.

It has a serpentine body with four short legs and eagle’s claws. Its body is covered with carp scales.

It also has a fish’s tail.

Traditionally, dragon is a symbol of power and majesty and is revered as the god of rain and wind.

Chinese emperors used to liken themselves to dragons and Chinese people always claim they are descendants of the dragon.

In ancient times, the dragon dance was performed as a ritual during droughts to pray to the dragon to bring rain and a year of good weather. 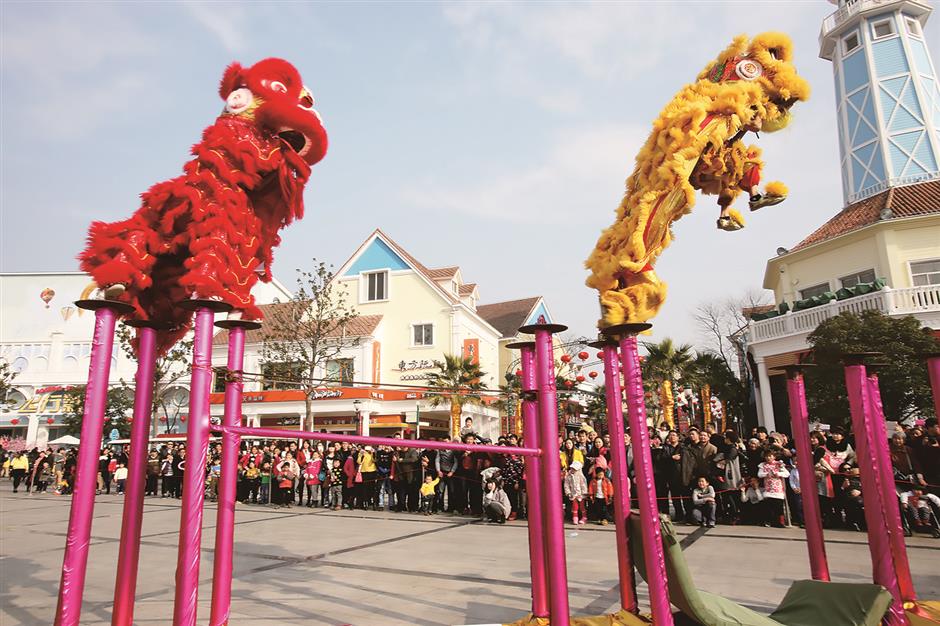 Lion dance is performed to fan up the festive atmosphere in celebrations. To perform an adult lion, two dancers wear a colorful lion costume. Some performances demand extremely high skills and mutual trust of the dancers.

The lion cub dance is usually performed by a single dancer.

To perform an adult lion, two dancers wear a colorful lion costume, with one dancer in front handling the oversized head and serving as its forelegs and the other bending over behind as the lion’s butt and hind-legs.

Both dancers wear pants matching the lion costume and shoes in the shape and color of the lion paws.

Accompanied by loud, clashing sound of drums, cymbals and gongs, the dancers perform the dance in a playful way, imitating the movements of a lion, such as napping, squatting, climbing, leaping, rolling, scratching or chasing its tail.

Before the performance begins, the guest of honor will be invited to dot the eyes of the lion prop with red paint as a way to bring it to life.

A traditional custom in the lion dance is cai qing or “plucking the greens,” which sounds similar to the Chinese word “fortune.”

Usually, green lettuce is hung on a tall pole together with a red envelope containing money.

With the front dancer jumping onto the shoulders of the dancer behind, the lion then stands up to reach for the lettuce.

Eventually, the lion “eats” the greens together with the red envelope.

The lion then spits out the greens as a symbol of showering good luck on spectators.

But it keeps the red envelope as a reward for the lion troupe.

Sometimes, the dance concludes with the lion spitting out red banners carrying greetings or auspicious words.

According to legend, the typical image of the Chinese lion, like the stone lions squatting in the Forbidden City and elsewhere around the country, first appeared in the dreams of either a senior Buddhist monk or an emperor more than 1,500 years ago. 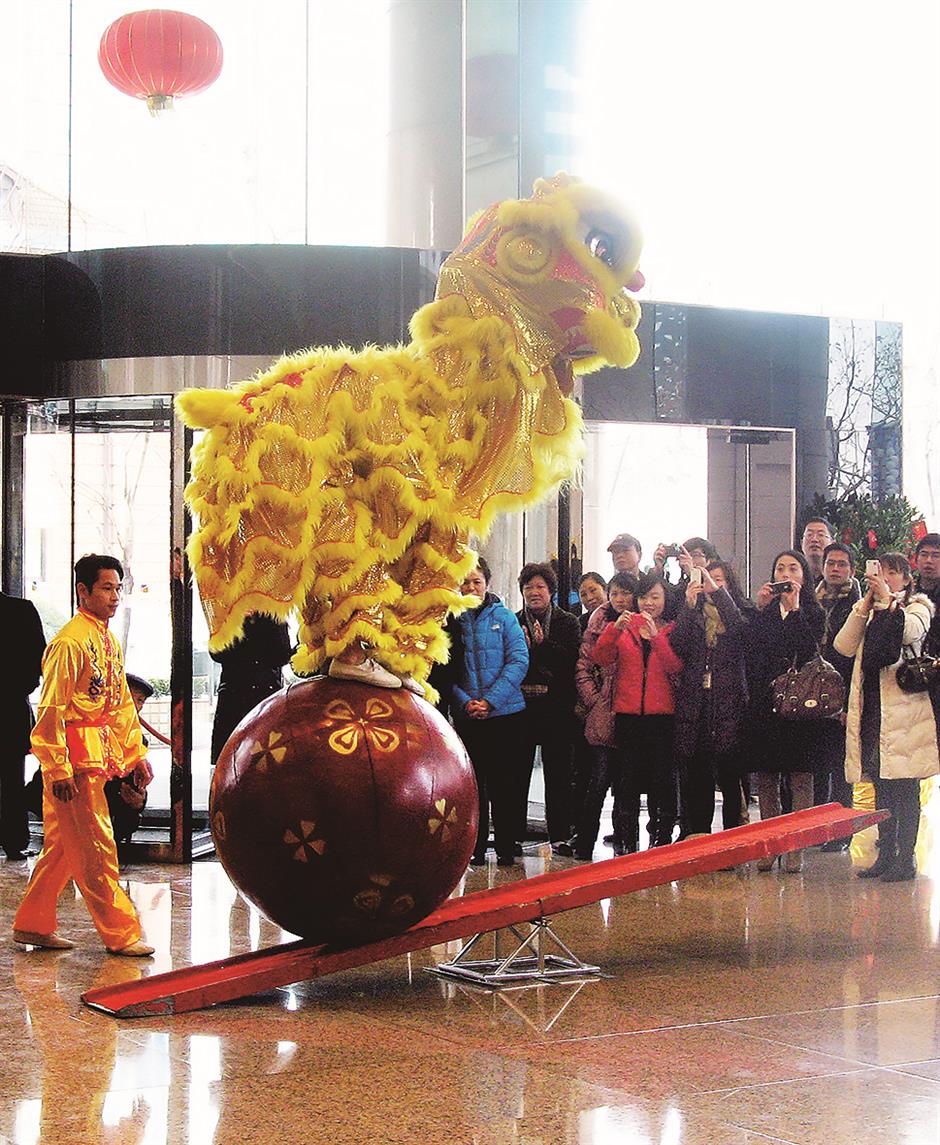 The divine animal was sent from Heaven to help humans drive away evil spirits and bring good luck and fortune. However, lions are not native to China.

They came to the country via the ancient Silk Road as rare presents to Chinese emperors from Central Asian countries and kingdoms.

But they were never or rarely seen by common people then.

Later, people created a dance to depict the mysterious animal’s power and superiority and also as a ritual to bring good luck and great prosperity.

So, in addition to traditional Chinese festivals, the lion dance today is also performed at weddings, grand opening ceremonies and birthday parties to welcome important guests.

The northern lion dance performed mainly in the northern part of the country featuring more gymnastic and acrobatic feats.

The southern counterpart, performed chiefly in areas south of the Yangtze River, includes many kung fu stances and fancy footwork.

Nowadays, lion dances staged outside the country are most likely performed in the southern style, because the majority of early Chinese settlers in Southeast Asia, Europe, North America and other parts of the world came from southern China.

Today, both the lion dance and the dragon dance are listed as intangible cultural heritages.