The grand hotel that became a palace for workers 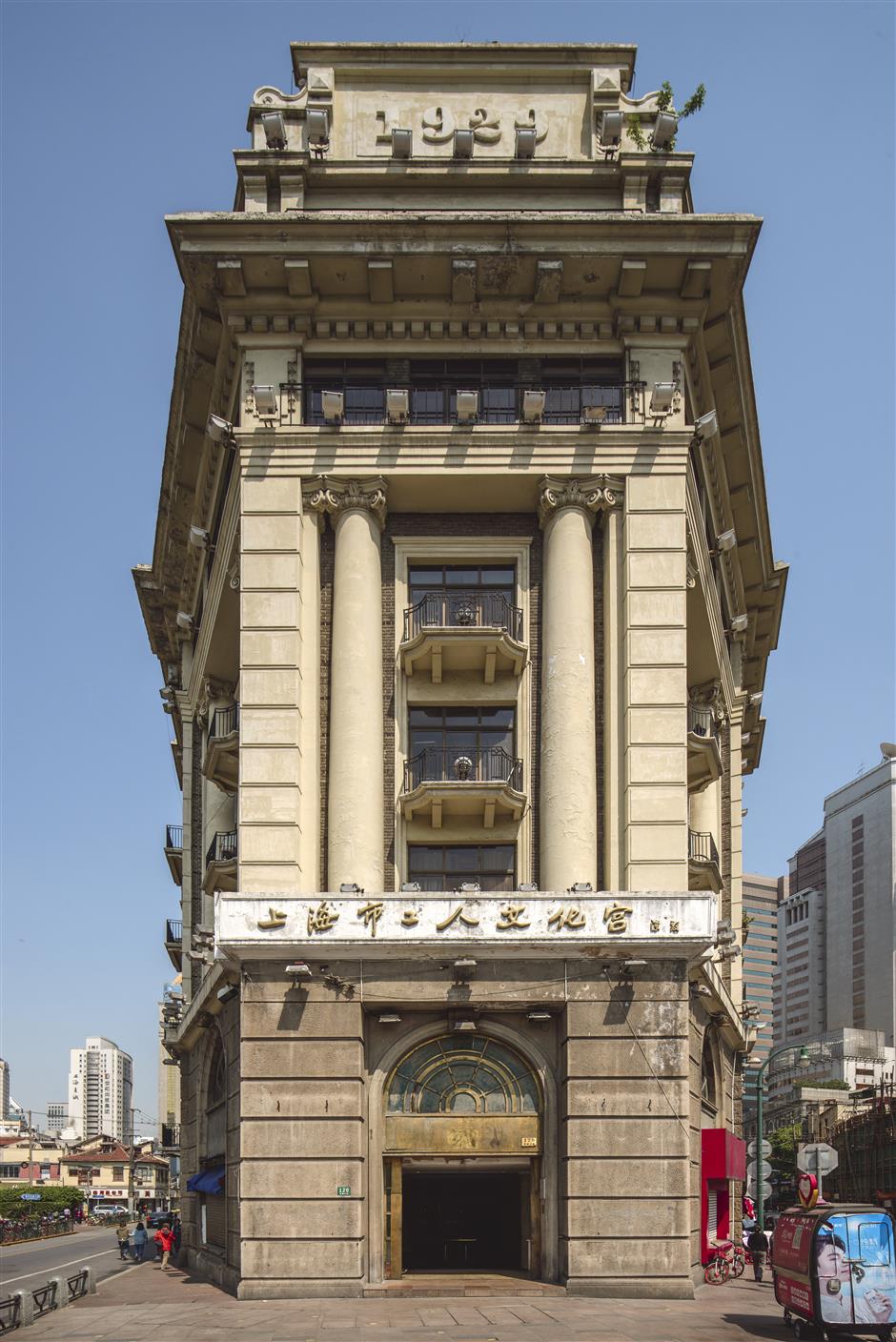 Social changes in China have split the history of a wedge-shaped building at 120 Xizang Road in two. As the stylish Grand Hotel, it stood at a prominent location since 1929 and set a precedent of adding Chinese storytelling entertainment in a hotel.

In 1950, it reopened as the state-owned Shanghai Worker’s Cultural Palace and became “a school and paradise for workers.”

The Grand Hotel was invested by several Chinese merchants who had run small hotels in the neighborhood. Enclosed by today’s Guangdong, Yunnan and Beihai roads, the wedge-shaped site was home to a Chinese teahouse before the project was planned in 1926.

Chinese investors commissioned Davies & Brooke, an experienced Western architectural firm whose signature works range from Lyceum Theater, Astor House to Great Northern Telegraph Building at No. 7 on the Bund. The Grand Hotel might not be the firm’s most eye-catching work, but the facade form and decorations catered to the aesthetic trend of its times. The site has been fully utilized and the almost flawless layout facilitated later operators of the hotel.

“Built on an irregular site, the Western-style facade facing the Shanghai racecourse naturally became a visual focus where the architect had intended to demonstrate his talent,” says Tongji University professor Qian Zonghao, an expert in Shanghai architectural history.

“The major facade that we see today is at the top of the wedge. The architect smartly treated the three sides of the trapezoid fronting pedestrians into three identical compositions — the ground two floors with gigantic arched gateway as the base, the middle three floors graced by Ionic Orders and a belt line to transit to the top part which was treated in a simple way,” the professor says.

Qian notes a noteworthy feature of the hotel building — the up to 100 identical cast iron balconies on the facade, a rare design on a classic building which functions as a modern hotel.

“The architect’s successful use of ‘module’ not only created a harmonious aesthetic effect, but also fulfilled its functional use,” Qian explains. 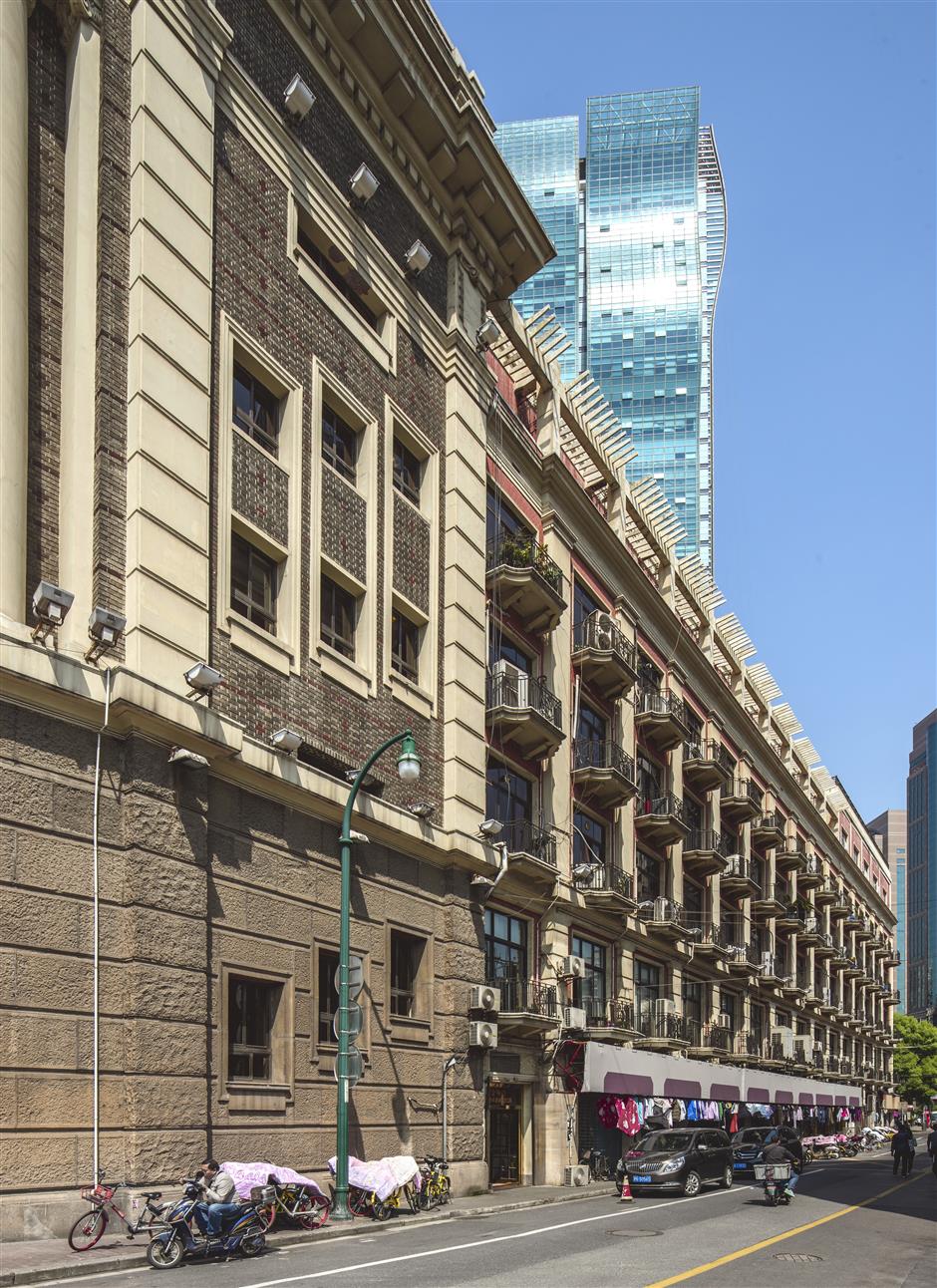 The up to 100 identical cast iron balconies on the facade are a special feature of the building.

According to Ni’s research, the hotel featured a grand vestibule facing a spacious restaurant in the center. Probably to make full use of the expensive land, the facades on Guangdong and Yunnan roads were sprinkled with an array of small shops.

On the upper floors, the architect placed 300 hotel rooms of all sizes, ranging from luxury suites with balconies and bathrooms to single rooms with a depth of less than 4 meters.

Two inner yards have been used to introduce light and ventilation for some rooms.

After completion in 1929, the Grand Hotel threw its doors open in 1930 and faced fierce competition from neighboring hotels. However the hotel enjoyed good business among Chinese merchants with its affordable prices and clean environment.

To attract more Chinese clients, the hotel offered performances such as traditional Chinese operas and storytelling on the ground floor. The theater featured 400 seats, a modern stage with neon lighting and microphones and even a wireless radio station for broadcasting shows and performances.

“The building reflected the meeting and mingling of Eastern and Western cultures in Shanghai. For some time, traditional Chinese performances were presented every day in this Western concrete architecture,” Ni says.

As Shanghai racecourse became People’s Square in 1949, its surrounding buildings all changed to new names and new functions. The Grand Hotel was purchased by Shanghai Workers’ Union and reopened as Shanghai Workers’ Cultural Palace on October 1, 1950.

The then Shanghai Mayor Chen Yi not only attended its opening ceremony but also wrote a commemorative plaque for the palace. His calligraphy in gold still glistens on a scarlet wooden board — “a school and paradise for workers.” 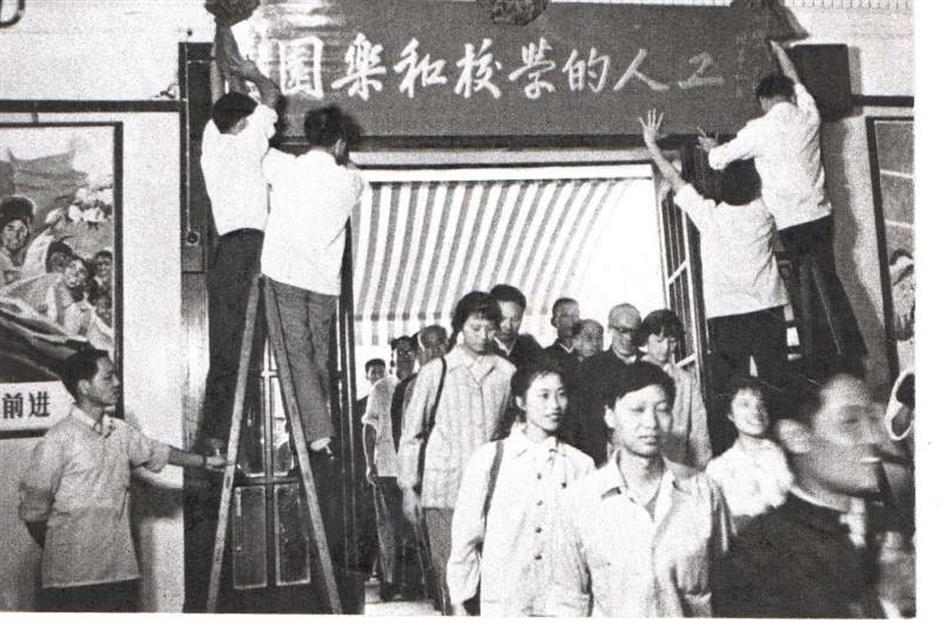 Workers hang a plaque reading "a school and paradise for workers" written by then Shanghai Mayor Chen Yi. 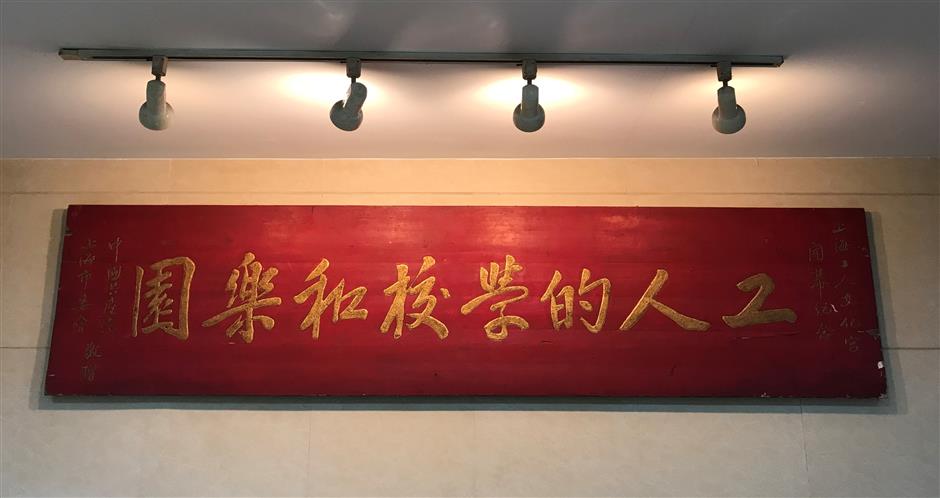 “The form of workers’ cultural palace derived from the workers’ club, a place for the working class to communicate and enjoy activities before 1949. The palace hosted cultural classes and entertainment for Shanghai workers since its opening, such as table tennis, chess, music, dancing, calligraphy, painting and Huju Opera,” says Zhu Shaohua, deputy director of the palace, who has worked there since the 1980s.

“The municipal government chose this building because it’s located at the landmark People’s Square. Only the most excellent workers had the opportunity to participate in activities here,” Zhu says.

“For the past decades, we’ve discovered many talent from ordinary workers. We organized training classes or workshops to help them develop their interests and talent like writing novels, creating dramas or other artistic performances,” he says.

To adapt to the new functions, the former hotel building has been renovated several times since the 1950s. But Zhu still has a profound memory of historical relics left from the era of the Grand Hotel.

“It was a well-designed, fully heated building. The doors and windows have chestnut-hued wooden frames which had unfortunately been replaced by al alloys,” Zhu says.

“Hotel rooms were not big, most of which had no bathrooms. But many had balconies. The rooms are usually furnished with a copper bed cover, a marble table with a set of four stools and a dressing table with marble desktop. In public areas, the floors have exquisite patterns while the walls beside staircase were adorned by wooden dados,” he adds.

Zhu says the palace endured a hard time since the 1990s when many state-owned factories saw a drastic decline in business and many workers were laid off. Without financial support from local factories, the cultural palace had to rent out space for commercial use, such as for a stock exchange agency and for an exposition of down products. 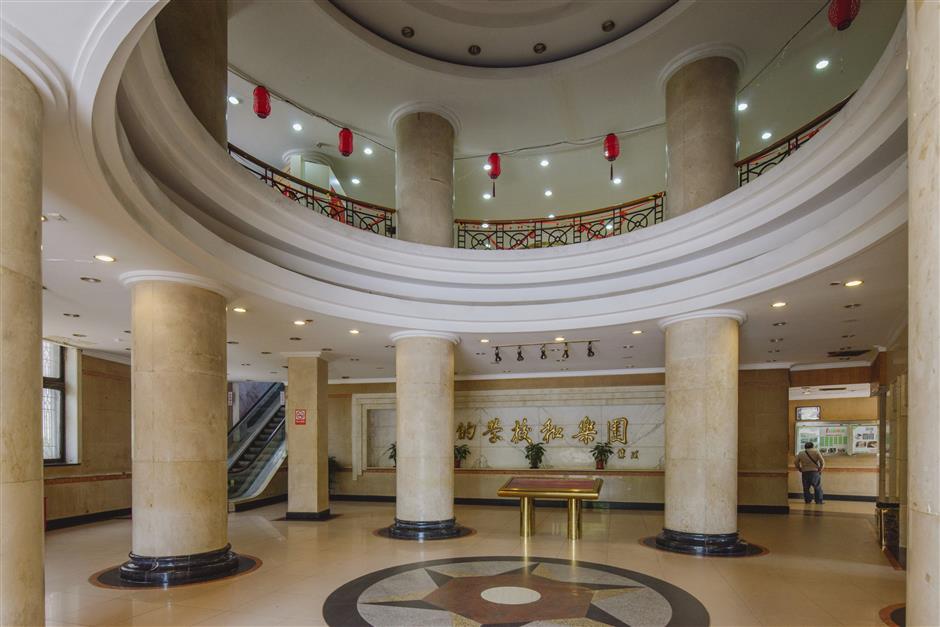 The ground floor, which previously had a spacious restaurant, houses a library and a small theater for cultural activities. 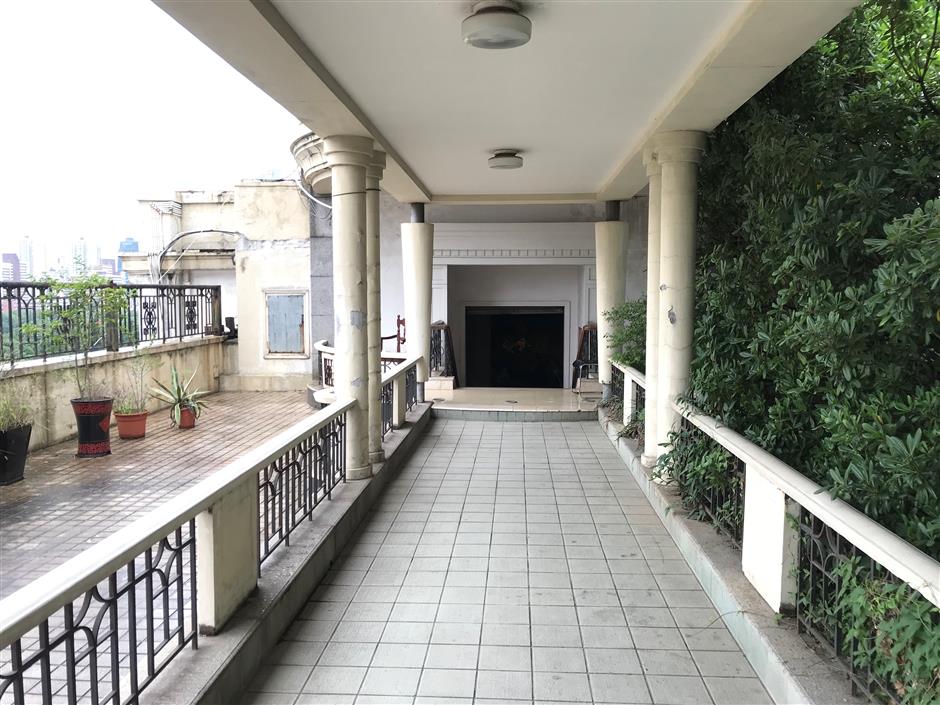 The roof garden of the 1929 building

Only small-scale cultural activities were hosted during “the difficult 20 years.”

Since 2013 the cultural palace received more financial support from Shanghai Workers’ Union and returned to its non-profit role. Now the ground floor, which was rent for commercial use, houses a library and a small theater. The upper floors serve as the workers’ aid and service center, an exhibition hall, training, artistic activity room and writers’ workshops.

“We have also walked out of the cultural palace to send training and cultural activities into office buildings and big enterprises. To attract young workers and white-collars, we provided trendy lifestyle classes like baking, tea ceremony, yoga and psychological consulting. Even our popular riddle-guessing games traditionally written on Chinese lanterns have a mobile phone version,” Zhu chuckles.

Ni notes that the Grand Hotel building is not the only case that experienced a dramatic transition of functions during social and political changes. After 1949, the famous dog-racing course became Shanghai Culture Square, and many buildings constructed for official use during the 1929 Great Shanghai Plan, launched by the then Shanghai Municipal Council, all changed to new roles after 1949.

“Many of Shanghai’s solid old buildings survived the times and confronted with change of functions and times. In Koolhaas’ ‘Delirious New York,’ many New York buildings only had a shell preserved and were with many new functions. So is our city a delirious Shanghai? For a heritage building, how to gradually transform and adapt to the changes is a subject worthy of further studies,” Ni says.

Tips: The building is open to the public from 9am to 9pm daily. I also recommend visiting an ongoing bilingual exhibition named “The Heart of the City — A Hundred Years of Changes in the East Nanjing Road Community” at the city’s urban panning exhibition hall at the People’s Square. 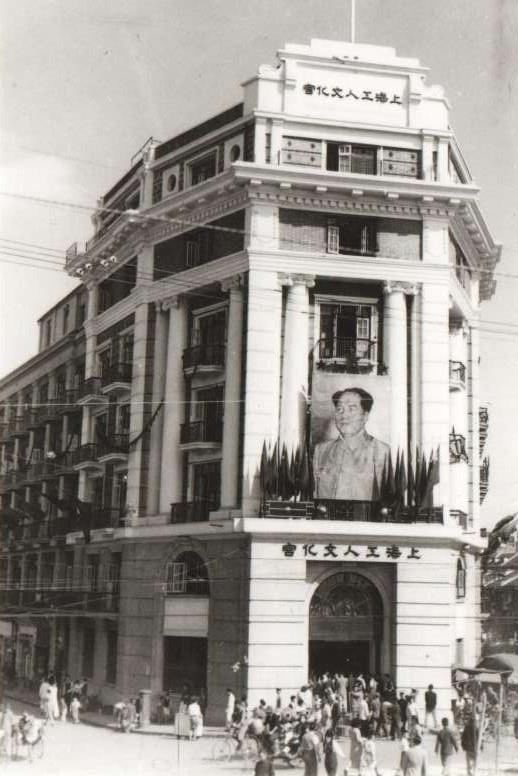 The clutching arm of the law

Hurriedly scampering to the roof of the hotel with all the various paraphernalia used by opium smokers, two men were not quite quick enough to avoid the clutching arm of the law during two lightning raids which were carried out at the Grand and Far Eastern hotels on Yu Ya Ching Road (today’s Xizang Road) last night.

Detectives, catching sight of their heels vanishing up a narrow stairway leading to the roof of the first-named hostelry, put on all speed, and the two luckless fellows were seized before they had time to dump the incriminating objects carried by them.

The two raids were carried out on a major scale, a few minutes after the arrival of the police and Russian Regiment S.V.C. vans.

The two hotels were surrounded by a ring of glinting bayonets carried by steel-helmeted Russian volunteers. With all avenues of escape blocked, the raiding police parties formed into several groups and, with pistols in hand, made their way into the Grand Hotel, which was the first to be searched.

Within a few minutes two prisoners were being led to the doorway through a crowd of wide-eyed Chinese men and women, who stood spellbound in the hotel lobby behind the rifles of Sikh members of the Reserve Unit and the steel-waistcoated uniformed police and detectives from Louza and the Reserve Unit.

These were the two men seized on the roof and, behind them, came the various objects necessary for opium smoking, with the addition of some scales and some white powder. Meanwhile, raiding parties were entering every room in the hotel surprising numerous mahjong parties throughout the building.

Herding the inmates into one corner while detectives searched them, other police literally went through the rooms with a tooth comb, mattresses, pillows, blankets and sheets being unceremoniously dumped on the floor while the contents of wardrobes were brought out for further scrutiny.

Even hats and shoes were searched and chairs and cushions prodded before the parties were satisfied that nothing incriminating was stored there.

The raids were not without an amusing side, on more than one occasion protesting Chinese being dragged out of bed, sleepy-eyed and somewhat shocked, to submit to the customary “running over” of the Chinese detectives.

Then would come a thorough searching of the bed with the mattress thrown to one end and the pillows and sheets at the other while the former occupant, now thoroughly awake, looked on with awe and trepidation.

Even bathrooms were not exempt from the searches as one unfortunate Chinese gentleman found to his cost, when, with nothing but a lather of soap to cover his nakedness, he was asked to stand up while smiling detectives diligently searched through the hot water in the tub.

Luckily nothing was found there, except some bath salts which were looked upon with some suspicion until a foreign officer explained that they were quite harmless.