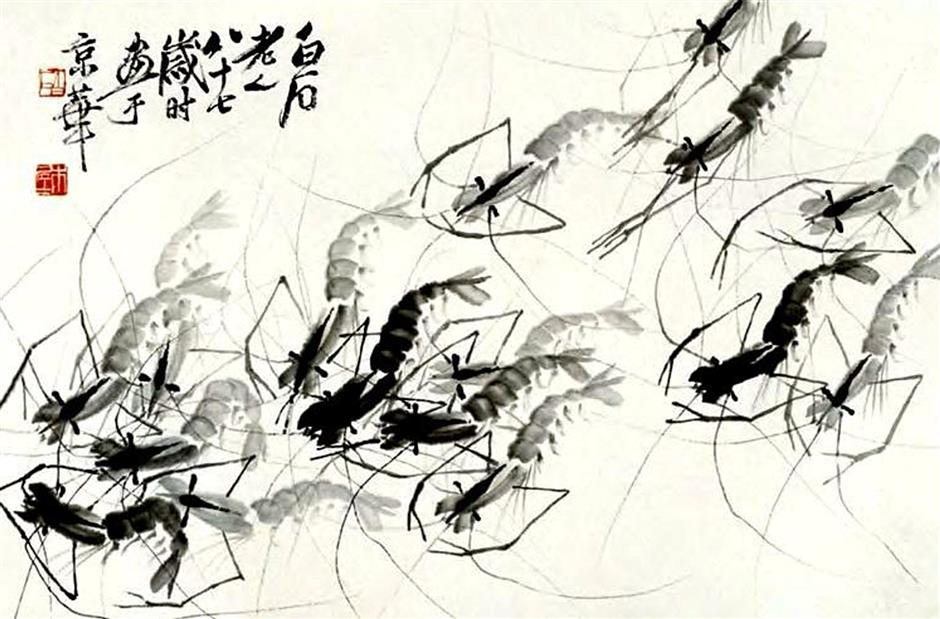 The iconic ink wash shrimps painted by Qi Baishi (1864-1957), one of China’s most celebrated modern master artists, are so popular that they are now synonymous with the painter himself.

IN some masterpiece paintings, the subjects are rendered with such unique and extraordinary features or characteristics that they later become the artistic identity of the painters themselves.

For instance, the iconic ink wash shrimps painted by Qi Baishi (1864-1957), one of China’s most celebrated modern master artists, are so popular that they are now synonymous with the painter himself. Whenever viewers see an ink wash painting of shrimps, they are mostly likely to utter the name Qi Baishi.

Shrimps have been the favorite subject of Qi’s painting for decades. He first became interested in this crustacean as a boy playing around a pond near his home. Later, when he began to paint shrimps, he also raised a few in big bowls at home to obtain a better observation of the species.

For years, Qi repeatedly copied the shrimp paintings of earlier masters and later he began to experiment with his own techniques and styles. It was not until he was already a sexagenarian that he finally created a very impressive and unique style of painting ink wash shrimps.

Qi painted shrimps in the so-called xieyi, or impressionistic style with swift, definite and spontaneous brush strokes. For instance, he used wire-like strokes to draw the claws, applied fine flowing lines for antennas and quick brush work for the crustacean’s walking legs and swimmerets.

Particularly, Qi created the shrimp’s segmental abdomen and tail with simple brush rubbings featuring beautiful and subtle gradation in the darkness of ink.

As a result, Qi’s ink wash shrimps are so vivid that in a viewer’s eyes, they really look alive.

Because his ink wash shrimps were so attractive and popular, whenever people talked about Qi, they would mention his shrimps. So, once the painter lamented in an inscription on one of his shrimp paintings: “I’m 78 now, and people say I only know how to paint shrimps. It’s so wrong!”

In fact, Qi was a versatile artist.

Born into a farmer’s family in Xiangtan in south central China’s Hunan Province, Qi began to learn carpentry at the age of 12 and later taught himself the art of painting, poetry, calligraphy and seal cutting.

During his youth, he traveled all around China to seek inspirations from nature while ardently studying the masterpieces of early Chinese painters. As a result, his painting was greatly influenced by masters such as Xu Wei (1521-93), Bada Shanren (1626-1705) and Wu Changshuo (1844-1927).

It was not until he was already 57 that Qi settled down in Beijing, later the capital of the People’s Republic of China.

By this time, Qi began to develop a unique and more modern art style of his own. Because of his rural background, he loved to paint flowers, birds, insects, fish, shrimps and vegetables. His paintings usually feature a lyrical simplicity and intentional childlike crudeness.

People can also see in his paintings the influences of his other skills, namely, woodblock design, realistic representation and calligraphic brushwork. 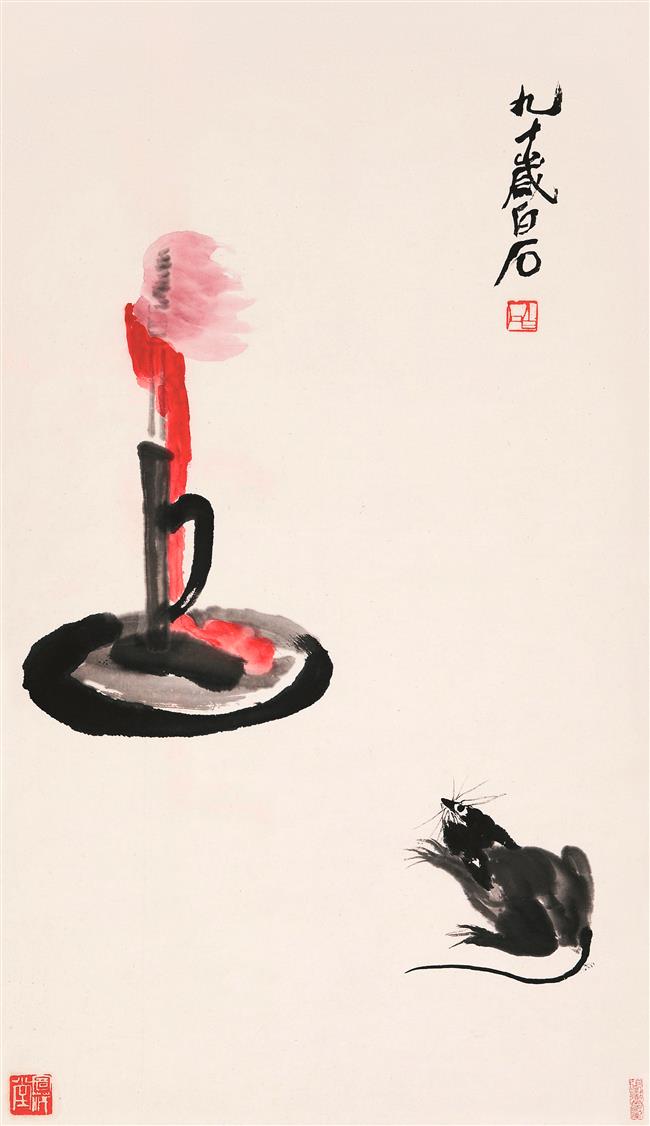 “A candle-holder and a mouse” painted by Qi Baishi at 90 years old. Qi upheld the theory that paintings must be something between likeness and unlikeness.

Qi upheld the theory that paintings must be something between likeness and unlikeness.

“That’s why his paintings are enjoyed by the vulgar and admired by the refined as well,” said a Chinese art lover.

Qi’s artworks were not only popular in this country, but also in other parts of the world as well.

After his meeting with Pablo Picasso in Nice, France in 1956, Zhang Daqian (1899-1983), another great modern Chinese artist, said the Spanish master painter had told him that he was an admirer of Qi Baishi and his own majestic brushstrokes were also influenced by the Chinese painter.

While viewing an ink fish painting by Qi, Picasso said: “Chinese paintings are really amazing. Mr Qi painted water fish without a touch of color and he didn’t even draw a single line to depict the water, but people can all see the river and sense the freshness of the water in his painting.”

Also, his 1925 work, “Twelve Hanging Scrolls of Landscape,” was evaluated for 1.5 billion yuan by some art dealers in the country.

What’s interesting here is that according to some art critics, Qi actually preferred painting landscapes and considered his landscapes superior to his paintings of birds, flowers, shrimps and other objects.

However, for most Chinese, Qi is still best known for his shrimps. And the ink wash painting of 16 swimming shrimps, 77 by 52 centimeters, ink on paper, in the collection of Shanghai Museum is widely deemed one of Qi’s best.