Monks from a major Chinese temple hold a Buddhist assembly in a historic church in New York, inviting leaders from other religions as guests.

A Chinese and an American involved in “ping-pong diplomacy” in 1971 meet again in China after 35 years.

A picture is worth a thousand words.

Those scenes are part of a newly opened photo exhibition commemorating the 40th anniversary of the establishment of China-US diplomatic relations. It features 350 photos and some videos.

The exhibition, entitled “Trans-Pacific Exchange and Cooperation,” opened at the Shanghai Archives on the Bund on Wednesday. It will run through August 15 before traveling to sister city Houston for Sister Cities International’s 2019 Conference.

“Social exchanges are important foundations of bilateral relations, and Shanghai has played a significant role in those relations since the early days,” Chen Dongxiao, president of the Shanghai Institutes for International Studies, told Shanghai Daily. “The exhibition contains many pictures of government-to-government exchanges, but more extensively captured moments involve city-to-city and people-to-people — across the arts, business, culture and technology.” 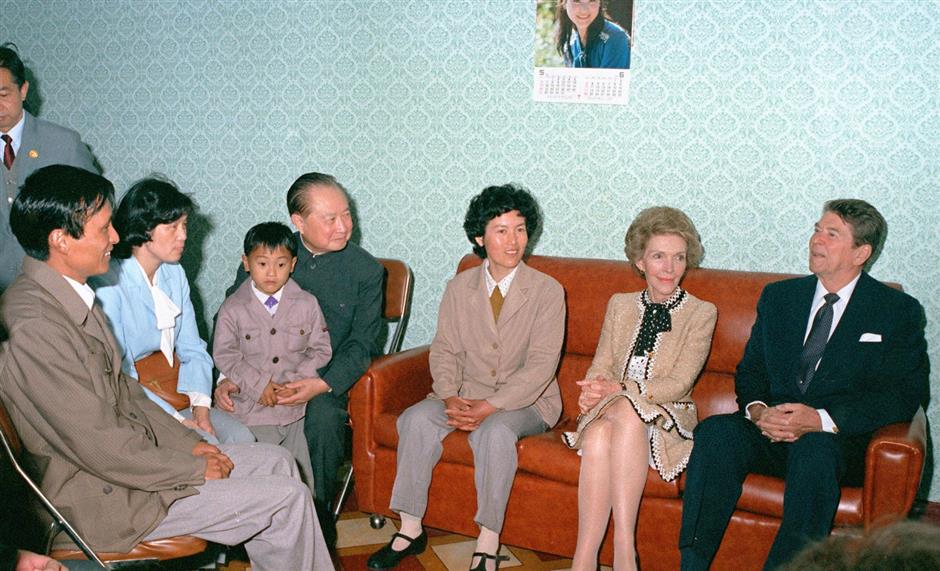 US President Ronald Reagan and his wife Nancy, accompanied by then Shanghai Mayor Wang Daohan (4th from right), visit a farmer’s home in rural Shanghai on May 1, 1984.

The exhibition, divided into five sections, includes historic moments like Chairman Mao’s meeting US President Richard Nixon in Beijing in 1972, and then Vice Premier Deng Xiaoping’s visit to the United States in 1979.

The photos also capture more casual moments of state visits, such as former US President Ronald Reagan visiting a farmer’s home in Hongqiao, which was then a rural area of Shanghai, in 1984.

Hongqiao later became a popular residential area for many early expatriates, and its multiculturalism has earned it a reputation for cuisines from around the world.

There are many photos that simply stop people in their tracks. Shanghai Daily explores some of them, their backstories and their relevance to China-US cultural relations today. 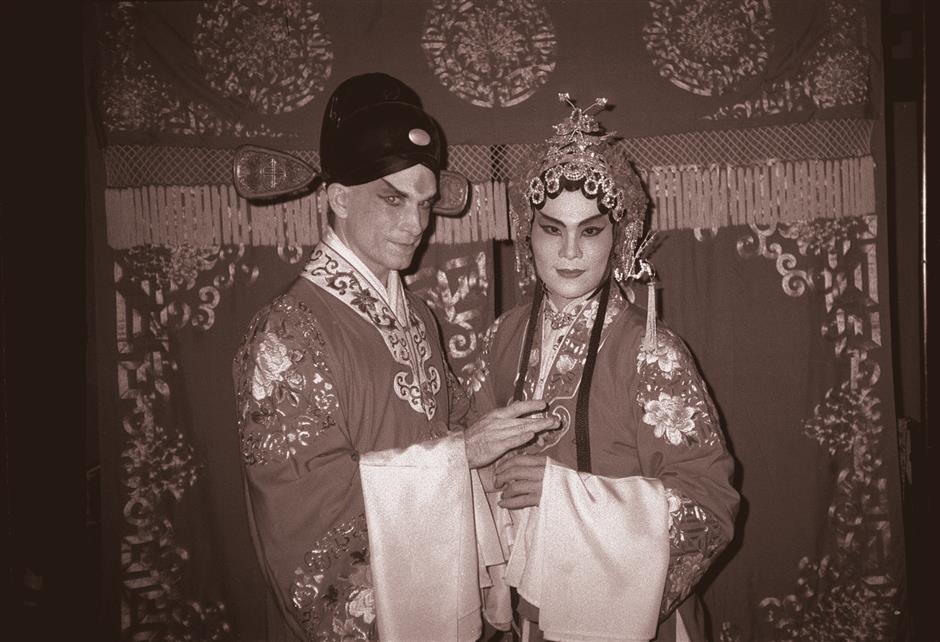 One photo garnering a lot of attention shows the premiere of the English version of the classic Peking Opera “The Story of Sue San” in Shanghai in 1991.

The opera tells the story of a courtesan forced by the brothel to leave her first love and marry a rich businessman. Years of anguish followed until she was finally reunited with her first love.

The two American students pictured were among many from Hawaii who followed in the footsteps of Elizabeth Wichmann-Walczak. She came to study at Nanjing University in 1979 in one of the first groups of foreign exchange students.

Wichmann-Walczak became fascinated by Peking Opera and was the first non-Oriental to perform in an opera.

She later became a theater professor and translated many Peking Opera stories into English versions at the Asian Theater Program in Hawaii. The operas are still performed by students today in Hawaii and in China.

The operatic world has been a great proponent of cross-cultural ties. In 2010, the opera “Madame White Snake” premiered in Boston in 2010. Inspired by a household Chinese folk legend of a white snake falling in love with a human scholar, it earned Chinese-American composer Zhou Long the prestigious Pulitzer Prize for Music. 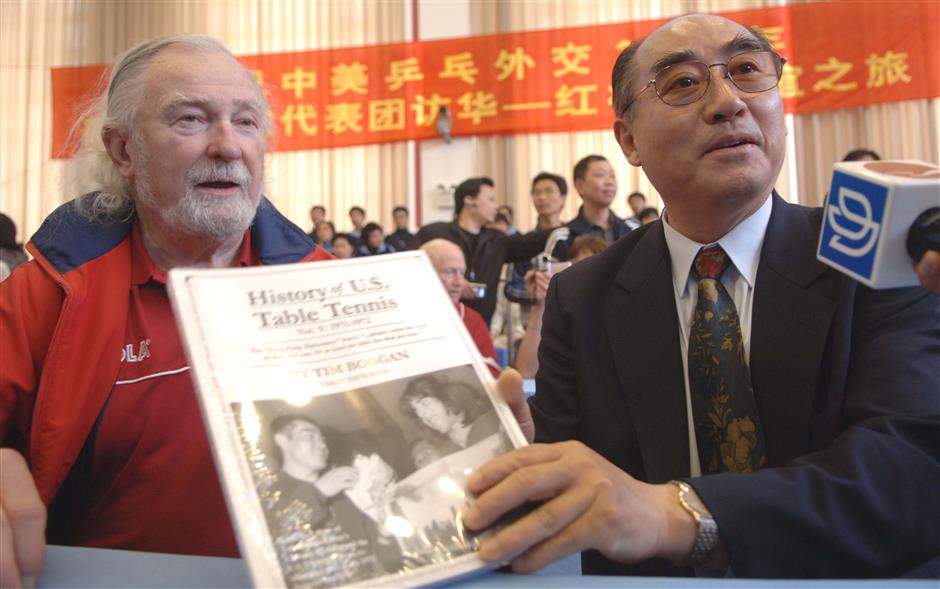 Chinese table tennis star Zhuang Zedong (right) and Tim Boggan, who visited China in 1971, hold up a copy of Boggan’s book about “ping-pong diplomacy” during a visit to Shanghai in March 2006.

Another photo in the exhibition pictures the reunion of Zhuang Zedong, former world table tennis champion of China, and Tim Boggan, who was an official with the 1971 US table tennis team. Thirty-five years after “ping-pong diplomacy” marked a thawing in China-US relations, they hold up a copy of Volume 5 of Boggan’s “History of US Table Tennis,” which covers 1971-72 — the “ping-pong diplomacy” years.

The story of “the small ball pushing the big one ahead” is now a legend. Exchanges between athletes, artists and academics have since continued and deepened, weathering the ups and downs in China-US relations.

One contemporary example is American earthwork artist and painter Stan Herd, who recently launched a new project called the Fibonacci Series. It will feature two gigantic earthwork art inspired by the mathematical series. One will be created by young Americans and set in Shanghai; the other created by young Chinese for a city in the US.

Artists should always work with one another, no matter what their governments do or decide, he added. 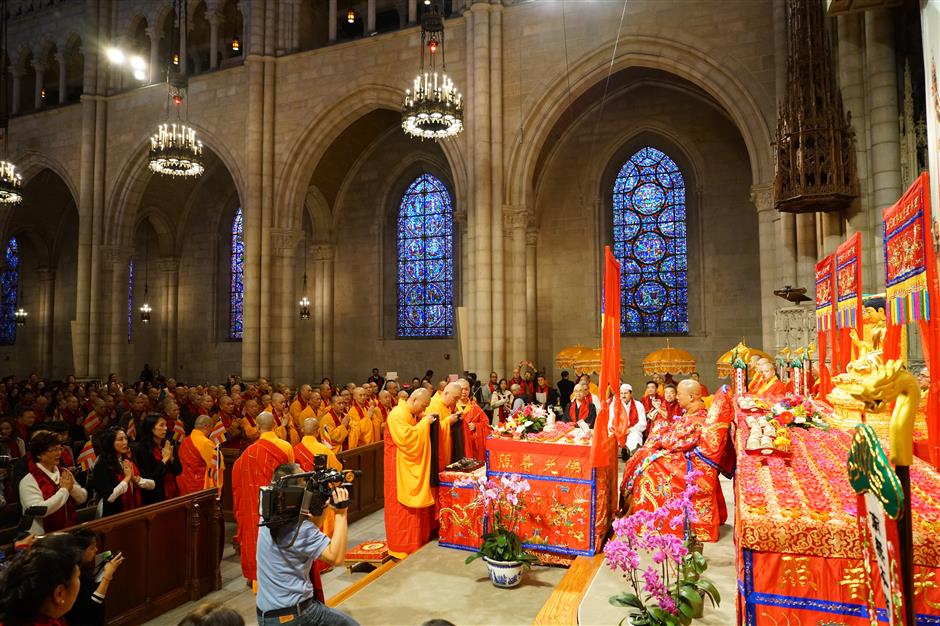 Monks from the Shanghai Longhua Temple perform a Buddhist ceremony at Riverside Church in New York in 2015.

Another photo in the exhibition that captured the attention of visitors shows a Buddhist assembly in a US church.

In 2015, the Shanghai Longhua Temple held the ceremony “Passing on the Lamp of Truth and Praying for Happiness” at New York’s historic Riverside Church, in front of more than 2,000 guests who included Muslim and other religious leaders.

Since ancient times, an array of religious and philosophical ideas, especially Buddhist, Taoist and Confucius, have often competed and complemented one another.

In many places, there are still relics of such inter-faith influence, such as Chinese chapels where more than one religion is celebrated, such as Taoist temples with Buddhist gods inside, or vice versa. There are also many unique and historic mosques, orthodox churches and other religious venues across China, reflecting influences on local cultures.

The exhibition also includes a video series of interviews with 20 prominent Chinese and 20 distinguished Americans commenting on bilateral relations — past, present and future.

The interviewees are people who have played major roles in China-US relations. They include former US President Jimmy Carter, who welcomed Deng Xiaoping on his official visit to the US; Long Yongtu, chief negotiator for China in talks to join the WTO; and Terry Branstad, current US Ambassador to China who was among the first to sign agreements with Chinese provinces during his first term as governor of the state of Iowa in 1983.

The interviews also include Robert Daly, director of the Kissinger Institute on China and the US, who revealed how he came to perform in a 1994 Chinese TV drama dealing with a Beijing couple’s struggle to adapt to life in New York.

Daly, who worked in the US embassy in the late 1980s, met the show’s lead actor Jiang Wen, who asked him to audition for the role as the lead actress’s second husband in New York.

Daly, then a teacher at Cornell University, had no previous acting experience but agreed to participate. The show was a hit in China.

“It is true that a growing number of Americans have the idea that the engagement has failed,” he said of China-US relations in the interview series.

“That’s wrong. The goal of engagement was never to make China more like America. We shouldn’t want China to be more like America. So the idea of engaging with China is working together in ways large and small in order to build joint interests and solve joint problems. That is still true. It is more important than ever.”