Situated at the edge of the International Settlement, the Avenue Apartments, widely known as Lianhua Apartments today, were financed by Union Real Estate Co, designed in 1931 and completed the following year. The 56 flats were much in demand.

The Avenue Apartments today at the crossing of Tongren Road and Beijing Road W.

“Before construction even started all the flats but two were snapped up by local families,” the China Press reported on November 12.

Tongji University associate professor Hua Xiahong, author of the book “Shanghai Hudec Architecture,” added: “The buildings were constructed at a time when the population and real estate prices in the settlement were skyrocketing.”

In the early 1930s, realty firms in Shanghai were accustomed to the enormous demand for apartments in new buildings.

“Shanghai had become apartment-conscious, following the trend of other big cities, and today persons who live here see no reason for worrying about the thousand and one details of home-owing,” the 1931 China Press report stated.

“Instead, they live in apartments and calmly pay the higher rentals. The building of two large apartment blocks and the renting of them before completion, therefore, is a common and seldom a noteworthy event in a city like Shanghai.”

The report also attributed the popularity to two other reasons.

One was that Shanghai flat-seekers were able to read and understand blueprints and diagrams.

“Many tenants were participating technicians or civil servants, who were familiar with the project,” professor Hua said. “They were attracted by the functional layout, the convenient transportation and adequate facilities for public activity in the neighborhood. Permission to use the garage and refrigerators for only a small amount of money was an added bonus.”

The other reason was the reputation of Hudec, whose firm had been responsible for a number of the best office and apartment buildings in the city. 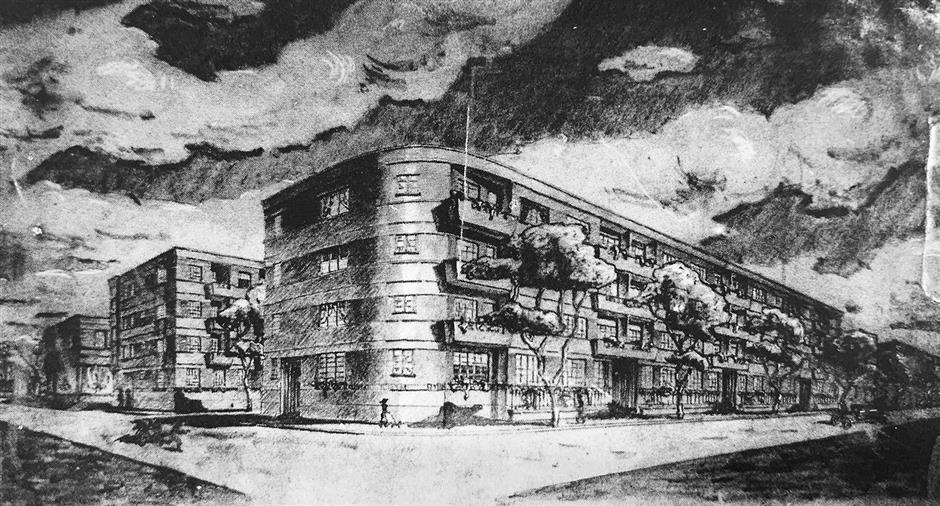 A Hudec drawing of the Avenue Apartments in June 1931

Born in Beszterce Banya (now Banska Bistrica in Slovakia) in the Austro-Hungarian Empire in 1893, Hudec was involved in 54 architectural projects, including the Park Hotel and the Grand Theatre in the center of Nanjing Road, during his 29 years in Shanghai.

After he left for Switzerland in 1947 and later the United States, his name was nearly forgotten until the 2008 “Year of Hudec,” organized by the Shanghai government and the Hungarian Consulate.

The event fired public interest in the legendary architect and Shanghai’s architectural heritage which has proved long lasting.

In 2014 he was voted as a “Shanghai Symbol” by millions of Chinese in an online poll, the only foreigner in a galaxy of Chinese celebrities.

His two masterpieces, the Park Hotel and the Normandie Apartments on Wukang Road, were also listed in the “99 Shanghai Symbols” in a campaign launched by the city’s tourism bureau to find “reasons for loving Shanghai.”

There are two Hudec memorial rooms in Shanghai now. One opened in 2013, in Hudec’s former English villa home on Panyu Road. The other opened last year in the architect’s last Shanghai residence, the former Hubertus Court, now the Jinjiang MetroPolo Hotel Classiq in Jing’an District.

Back in Hudec’s hometown, part of a building designed by Hudec’s father, Juraj Hudec, has been turned into the “Centre of architecture L. E. Hudec” showcasing the work of both father and son.

The busts of Laszlo Hudec and his father Juraj are unveiled at the Center of Architecture L.E. Hudec which opened in March this year in Hudec’s hometown. The center is a 400-square-meter space on the top floor of Villa Spath on Skuteckeho street in Banska Bystrica.

According to the China Press, the Avenue Apartments featured flats of one-room to five-room suites.

With a delightful exterior appearance, the Avenue Apartments were roomy inside. Tiling and terrazzo were liberally used in kitchens and bathrooms.

There were lawns, walkways and roads. Facilities for private motor cars were offered. Situated in an inviting section of the city, the apartments were close to the children’s playgrounds.

The Yah Sing Construction Company, Hudec’s long-time collaborating firm, was the contractor for the Avenue Apartments.

According to an article in a 1940 Chinese magazine “The Grand View,” the popularity of apartments in Shanghai was because they were more convenient and cheaper than hotels.

Today, the apartments are a cluster of three residential buildings, each with five to six floors. A housing manager surnamed Yang said most flats retain the original layout and many residents are elderly.

“Fronting the street, there are a number of two-story Chinese shops. The boiler room and 19 garages were installed between the residence and the shops.”

In the initial design, each floor of the four-story apartments was divided into four sections. Every section contained suites ranging from one to five bedrooms, which were equipped with a bathroom, gas cooker and hot water supply. A ventilating shaft was used to provide fresh air for the bathrooms lacking natural ventilation and lighting.

The rooms were paved with Singapore mahogany flooring and had in-wall closets.

The architect designed two entry and exit routes. Owners could walk in from the southern entrance which had a grand staircases, while the servants entered through the northern gate with a narrow staircase.

The buildings are essentially modern in style with a simple-cut facade.

Hudec used red-brick walls between the windows and a rustic finish between the floors. A strong visual effect is thus created by the contrasting creamy and red colors.

The northern staircase is in a vertical design while the southern facade constructs a fluent arc with Tongren Road. The balustrades over the balconies and staircases are graced by Art-Deco cast iron patterns.

When the Avenue Apartments were snapped up in 1931, Hudec was at the peak of his career. His three signature works, the Park Hotel, the Grand Theatre and the Green House, which were admired as the No. 1 hotel, No. 1 cinema and No. 1 luxury residence in the Far East, were about to be built one after another in the following years along Nanjing Road.

The Avenue Apartments are certainly a lesser-known Hudec work, but their popularity led to the architect’s future success that became part of Shanghai architectural history.

Tips: The buildings can be appreciated on Beijing Road W., Tongren Road and Nanyang Road. The interior is not open to the public.

Estrella means “star” in Spanish, which is an apt name for the seven-story building that serves both commercial and residential purposes.

The design is dignified and restful, in the Spanish style, with Renaissance and Baroque elements.

The lower two floors comprise the plinth, while the third to sixth floors are punctuated with shallow balconies decorated with protruding windows and cast-iron patterns.

The top of the building is composed of continuous balconies and cornices.

Strong Spanish architectural elements are featured all over the edifice, ranging from the patterns on the window lintels, the bamboo-like thin columns set as the glazed bars of the protruding windows, and geometric pattern mosaics on the floor and in the wainscot.

The contrast between creamy walls and the red-brick molding showcases a tone of traditional Eastern European architecture.

Italian architect Luca Poncellini attributes Hudec’s use of Spanish motifs largely to the cut-throat competition in Shanghai’s real estate sector, where “architectural exoticism was providing the building a sort of extra value, from a marketing point of view.”

“The impressive Estrella Apartments block rises out from the surrounding environment made of smaller constructions ... its style follows the Spanish tradition and it was built in the center of the French district carved out from Chinese soil,” writes the scholar who authored “Laszlo Hudec.”

“The most interesting thing is that Laszlo Hudec had the chance to apply everything he had learned from Spanish architecture from his long travels in Spain and southern Europe in the early 1920s.”

He added that there were many hand-drawn sketches of Spanish historical buildings in Hudec’s archives.

The property was developed by China Realty Company development agency, which was founded by merchant Alberto Cohen. He moved to Shanghai from Constantinople before 1910, made a fortune from the rickshaw business and later devoted his attention to real estate.

The Estrella Apartments was another upper-class apartment building by L.E. Hudec in 1929.