The “Marble Hall,” Sir Elly Kadoorie’s former residence was called “the most beautiful of all stately homes in Shanghai” in 1924. 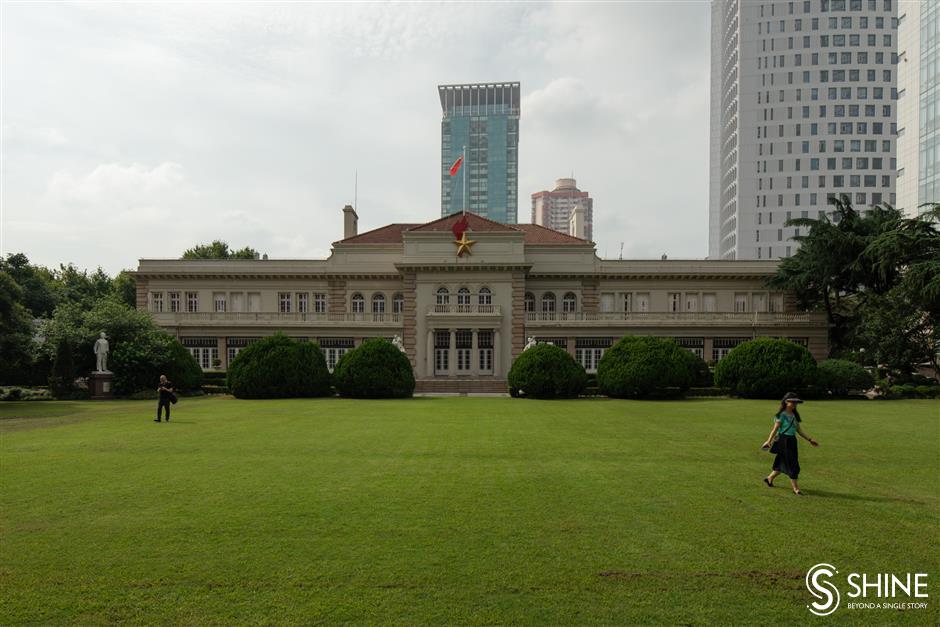 “The Kadoorie family owned many properties in Shanghai, the most renowned of all being the Marble Hall near the Jing’an Temple. The palatial building is made of refined marbles imported from Italy,” said Professor Wang Jian from the Shanghai Academy of Social Sciences.

The Kadoorie Family, Sephardi Jews, emigrated from Baghdad in 1880 to settle in the Far East.

The family fortunes were founded by Sir Elly Kadoorie and Sir Ellis Kadoorie, who were pivotal players in the development of business giants, such as the Hongkong & Shanghai Hotel Co and China Light and Power.

Born in Baghdad in 1867, Sir Elly Kadoorie, owner of the Marble Hall, had worked for David Sassoon & Sons’ Company but left to start his own business. He became a successful real estate and hotel owner, merchant banker and rubber plantation owner. 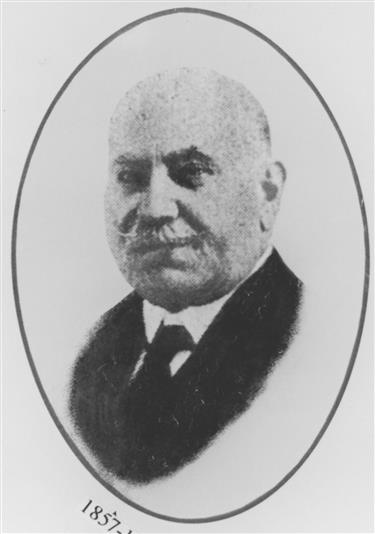 The Kardoori family was one of the most famous Sephardi Jewish families that made a fortune from the trade and real estate business in old Shanghai.

When the Marble Hall was built in 1924, the North-China Herald dedicated a full page feature with pictures to the news.

“Many of our commercial princes have done lasting credit to themselves by the beautiful homes they have built, surrounded by tastefully laid-out estates. The houses of the late Mr Edward Ezra, Mr Moller, Mrs Parker, Mr H.E. Morris and others, would rank high even amongst some of England’s old country houses. To the list of Shanghai’s ‘stately homes’ Marble Hall must be added, in Bubbling Well Road extension, the residence of Mr E.S. Kadoorie, which must be regarded as the most beautiful of all, and for reasons which will be given later Shanghai will feel particularly proud of it,” the North-China Herald reported on March 22, 1924. 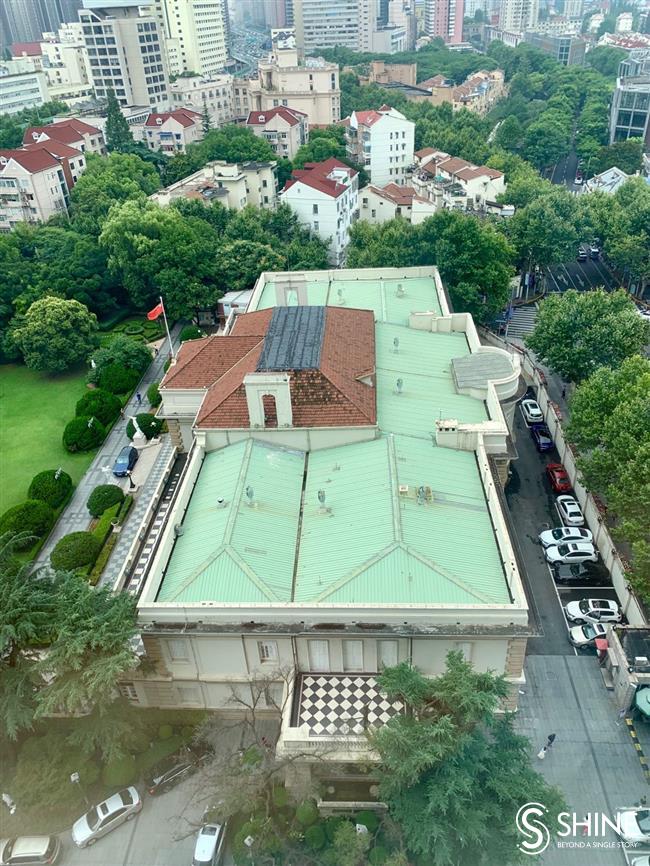 A bird’s-eye view of the Marble Hall

The report revealed that the original idea was to construct a Jewish Country Club. But as the work progressed “it was obvious that everything had been planned on too large a scale for the needs of that section of the community and so Mr Kadoorie has taken the place for his own residence.”

The original building designed by Messrs. Lafuente & Wootten was gutted by fire and then Kadoorie commissioned Messrs. Graham-Brown & Wingrove to redesign the “architectural gem.”

Professor Wang added that the most stately home was built with a steep price of around 1 million taels of silver (Most taels were equivalent to 1.3 ounces of silver.)

“The major hall at a height of 65 feet (20 meters) is extremely magnificent which has been a social center of the city’s upper-class gatherings,” he said.

The ballroom is 20 meters high, 25 meters long and 50 meters wide, with an exquisite white ceiling, giant mirrors and crystal chandeliers.

The Marble Hall is now numbered at 54 Yan’an Road W. Every visitor was shocked at its incredible grandeur and luxury. Covering an area of 1,500 square meters, the two-story mansion with more than 20 rooms was fit for a king.

White Italian marble is everywhere — on the walls, columns, fireplaces, staircases and platforms. The inside is unique in color with vinegar green and cream hues.

A room on the first floor, originally used for playing poker, has an exotic ceiling in a curved shape with golden patterns. The second floor features mostly bedrooms for the hosts and guests.

According to the North-China Herald, Kadoorie promised to place the whole of the house and grounds at the disposal of any charitable society, of any nationality or creed, for any worthy money-making purposes and “he will pay all expenses so far as the house goes.”

“The place is admirably suited for such purposes, with large and handsome salons, a wonderful verandah 225 feet long (68 meters), a ballroom only a few square feet less than the Carlton Café, a kitchen capable of attending to the wants of a very large gathering, and outside, ground for six tennis courts, and other lawn games, besides a great flagged court which could be utilized for many purposes,” the report stated. 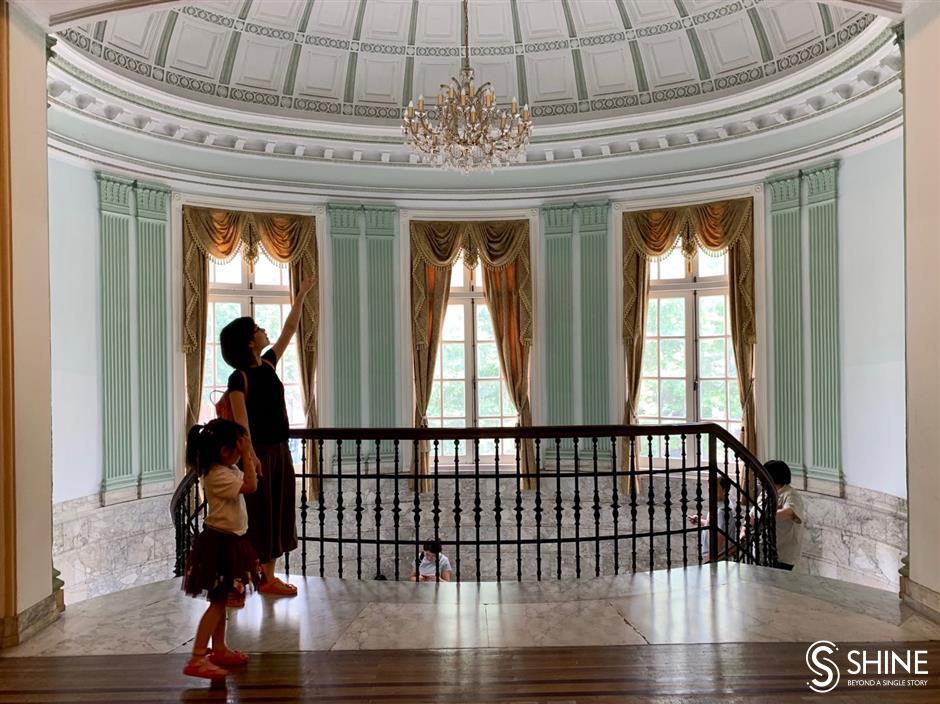 The inside of the Marble Hall is unique in color with vinegar green and cream hues.

In the following years, Kadoories hosted many activities for the Jewish Community and other organizations in the house. Large-scale parties, banquets and dancing balls were held here for community meetings and Jewish holidays.

Despite the magnificence of Marble Hall, the wealthy Kadoorie family suffered many ups and downs.

In 1919, Kadoorie’s beloved wife Laura died in a fire in their home, which sent shock waves throughout the expatriate community of old Shanghai.

During World War II, the Japanese put some Kadoories family members into a detention camp in Zhabei District in 1943, where Sir Elly Kadoorie died on August 8, 1944.

Elly’s sons, Lawrence and Horace, were placed under house arrest in  Marble Hall before they left Shanghai for Hong Kong in 1945.

The two brothers continued the family businesses, which had encountered loss during the wars, and became wealthier following their move back to Hong Kong.

Sir Elly Kadoorie, who built the Marble Hall, and his wife Laura Kadoorie were both buried in Shanghai, in the former Jewish Cemetery on Hongqiao Road. The inscription on the Kadoories grave reads: “The true grave of the dead is in the heart of the living.’’

Today the cemetery is a quiet graveyard known as the Mausoleum of Soong Ching Ling, widow of Dr Sun Yat-sen and the late Honorary Vice Chairwoman of China. 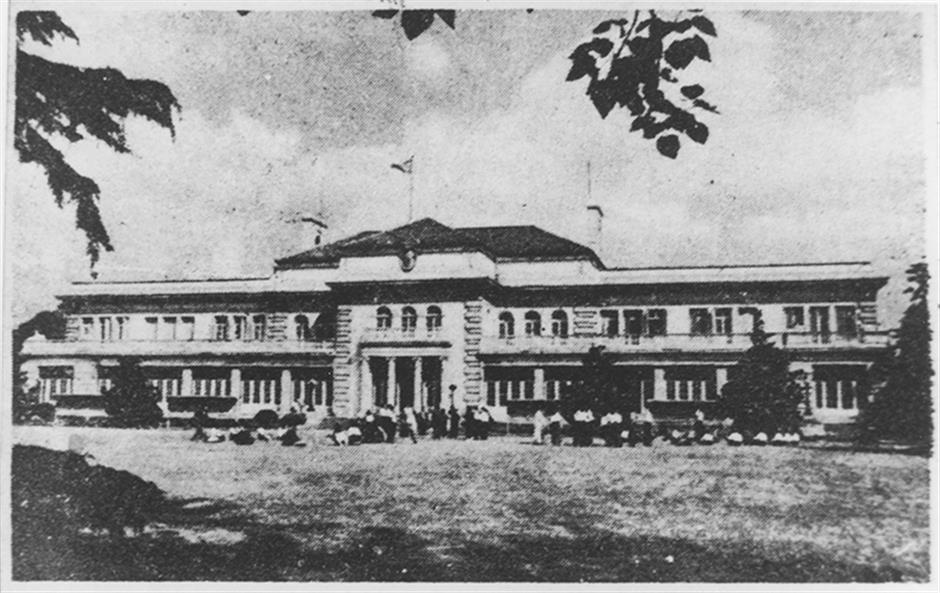 A gathering at the main east entrance to the lawns of the Marble Hall in 1953.

The institute often hosts festive celebrations on June 1, International Children’s Day. During that time, the Marble Hall turns into a sea of games and laughter inside out.

Officer Dong Lei, from the China Welfare Institute Children’s Palace, revealed Michael Kadoorie has visited several times, and said both he and his father Lawrence were happy to see their home become a paradise for gifted children.

The children love the fairy tale house and it provides a happy ending to Shanghai’s most beautiful home. 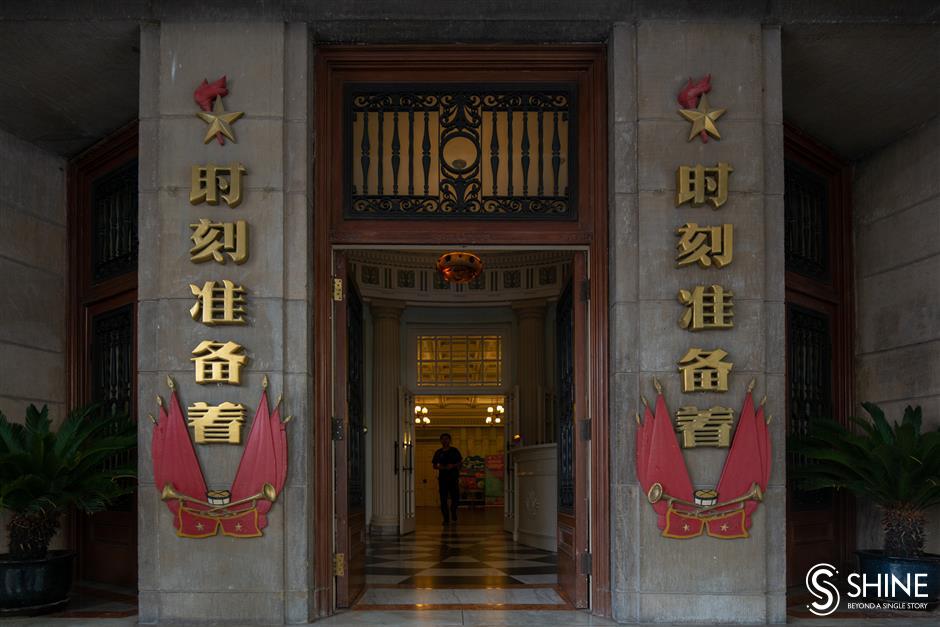 The side-door entrance is decorated with the slogans and emblems of the Young Pioneers of China. The red flag and torch, symbolizing the victory of the revolution and brightness down the path of Communism.

Tips: The building is not open to the public but it can be admired from Nanjing Road W. and on the lawn fronting it.

To describe the building itself, one can only say that it is palatial. It has been built on a lavish scale, yet at the same time it is not ostentatious. There is marble everywhere — 150 tons of it altogether — but without a suggestion of vulgarity, the work having been executed with wonderful good taste, giving a most pleasing effect where it would have been so easy to overdo it. The grounds occupy nearly the entire block bounded by the Bubbling Well Road extension, Tifeng Road (today’s Wulumuqi Rd N.) and Great Western Road (today’s Yan’an Rd W.). At the entrance are handsome iron gates with heavy brass balusters and brass enrichments in the architraves. Passing by the main east entrance to the lawns, one has a magnificent view of the 300 feet frontage. Raised several feet above the lawns, the building is a striking example of the free Renaissance style, with a suggestion of the Italian influence. It has a wide stone terrace further beautified by handsome bronze lamps, whilst sculptured sets are on their way for erection there, and then the fine glass enclosed verandah, 225 feet long and some 30 or 40 feet in width.