How Jing'an Temple evolved into an international cultural exchange of Buddhism

The old English name of Jing’an Temple was Bubbling Well Temple as there was an ancient well bubbling all day and night in front of it. The well was filled up in the 1960s but the temple still survives today and has grown much grander in scale in the heart of Jing’an District. 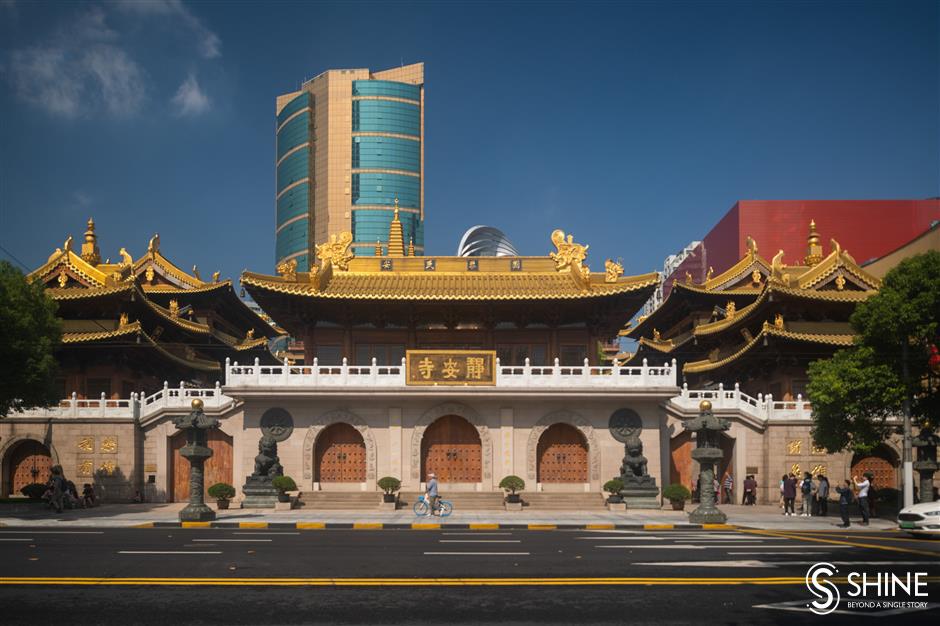 Some scholars trace the history of Jing’an Temple back more than 1,600 years, which made it the oldest Buddhist temple in the southern region of the lower reaches of the Yangtze River.

“The temple formerly perched on the bank of old Wusong River (today’s Suzhou River), which was constantly attacked by river waves, finally crashed in a flood in 1216. After that the temple was moved to the bank of Bubbling Well Creek, which is the present site of 1686 Nanjing Road W. today,” said scholar Zhang Sheng from the Shanghai Academy of Social Sciences who has researched the urban and architectural history around Jing’an Temple.

After researching a Songjiang record named Yun Jian Zhi or Record among the Clouds, published in the 1190s, Zhang traced the temple’s history back more than 1,600 years, which made Jing’an Temple the oldest Buddhist temple in the southern region of the lower reaches of the Yangtze River. He and other historians are still searching for more sources to prove this.

According to the 2013 book, “Traces of Place Names in Jing’an District,” edited by the district’s urban planning and land management bureau, the temple was first named Hudu Chongyuan Temple, renamed Yongtaichan Temple during the Tang Dynasty (618-907) and got the present name Jing’an Temple in 1008 during the Song Dynasty (960-1279). 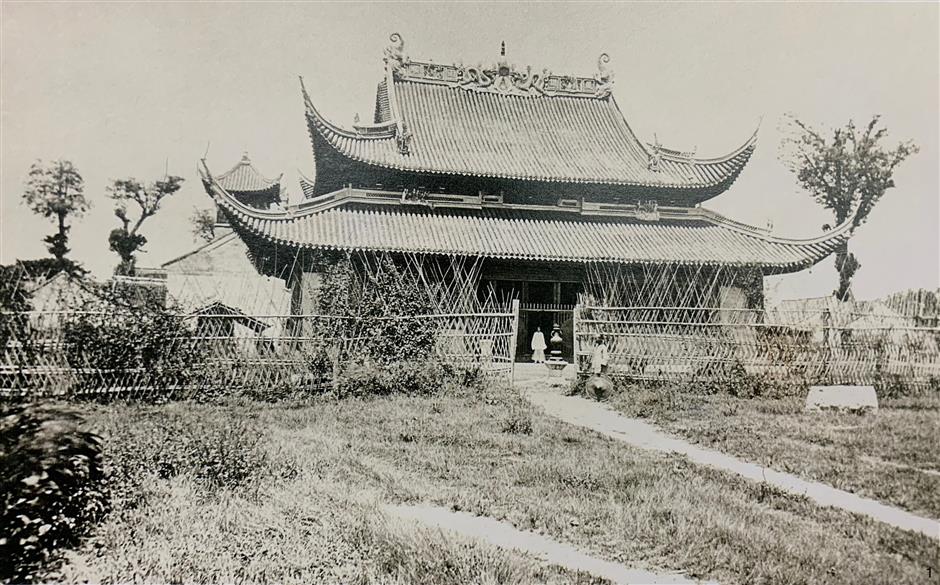 Jing’an Temple in the 19th century, then located in the western suburbs of Shanghai.

After moving to Bubbling Well Creek, the ancient temple gradually expanded and grew to be a gigantic temple in the Yuan Dynasty (12711368). The temple was not only big, but also beautiful. It boasted eight famous scenes, one of which was certainly the “Bubbling Well” fronting its main gate acclaimed as “the Sixth Spring of the Earth.”

As times went by, all the eight scenic spots disappeared, but were revived in a Chinese garden inside Jing’an Park. Small rivers, a stone tablet, bubbling well, rockery, flowers and woods were arranged in an elegant way so the “Garden of Jing’an Eight Scenes” covers an area of 2,300 square meters.

“Ancient Chinese temples had often been a place for writers to wander and jot down their thoughts and feelings. Poems of the Jing’an Eight Scenes had been edited into collections. The temple attracted a continuous stream of visitors and people wrote about their tours in old records or poem collections,” said Zhang.

In his “Guide to Shanghai,” an expatriate named A. G. Hickmott wrote about his tour to the temple in great details, which was recorded in the North-China Herald on December 29, 1923. The writer first described the well-known “Bubbling Well” with “its muddy water, carbonic acid and marsh gas.” 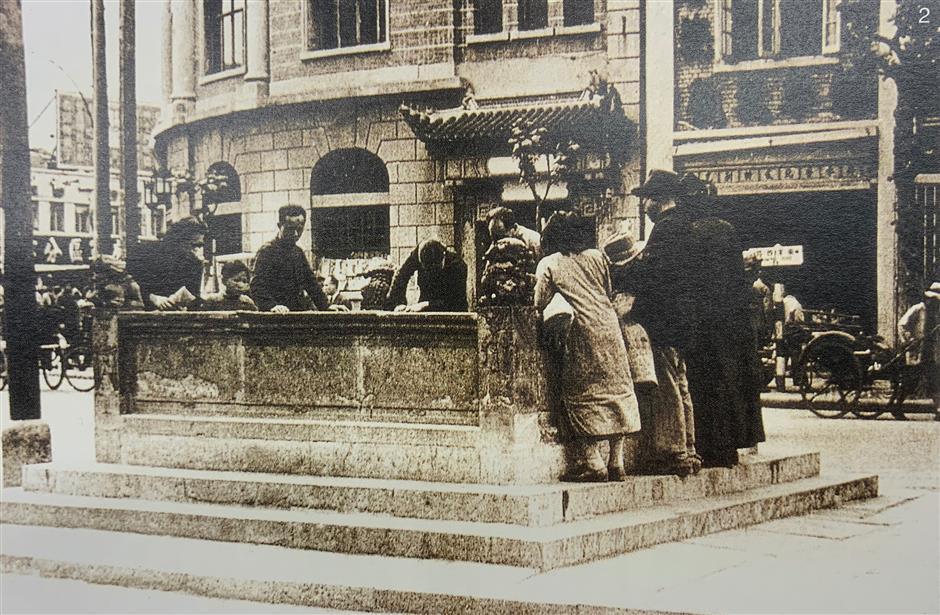 “The temple is a clean and well-kept place, but is greatly handicapped through lack of funds. Passing through several small halls and a couple of courtyards one comes to the main building, which, it is claimed, dates back some 1,000 years. This is the real Ching-an-tz, ‘Temple of Repose (Silence), Purity and Peace.’ The first gods that greet one are three brothers — the Gods of Heaven, Earth and Water — whose names signify what they rule and those birthdays fall on the 15th day of the 1st, 7th and 10th moons. All are gorgeously dressed in scarlet robes,” he wrote.

Going into the main temple, Hickmott was welcomed by a golden Buddha, which was around 20 feet high, sitting on lotus leaves and occupied the chief shrine. In the hall were the nine companions of his life and a similar number of other gods. “Everything, including the doors, tables and shrines, and the gods themselves, is exceedingly well carved and attracts not a little attention. The brocades, curtains and tapestries are beautiful,” he said.

The monks were just about to meet for evening prayer when the writer entered. Having struck his bell three times, the abbot began the service by beating fast and slow, and produced a tinkling sound, while another monk struck a wooden shell drum, which produced a hollow sound. A few words were chanted by the abbot in long, drawling tones and in a few minutes this was followed by the other monks present joining in, chanting, murmuring and singing in succession for some time before the meeting finally dispersed.

Scholar Zhang Sheng added that the history-rich temple had become a common place for urban religious life, which is reflected in the annual temple fair.

He explains that the Chinese Buddhist temple regularly hosts Buddhist ceremonies such as the “Buddhist Bathing Festival.” At this festival, monks bathe Buddhist statues with fragrant water made from five aromatic herbs and chant scripts to ask for blessings.

“Jing’an Temple was located in the western suburbs of Shanghai and its Buddhist festival drew many local villages to visit for burning joss sticks and praying for good life. The villagers often brought with them agricultural products and handicrafts for sale and exchange for farm implements and households they needed. So more and more peddlers set up their stalls around the temple, which gradually became an annual temple fair for pilgrims, tourists and shoppers,” Zhang said.

During the fair’s peak time in the 1920s and 1930s, the promenades of the neighboring streets, which are today’s Huashan Road, Nanjing Road W., Yan’an Road W., Wanhangdu Road and Yuyuan Road, were all crowded with peddlers’ stalls. After 1937, the fair started to decline and finally terminated after 1963. 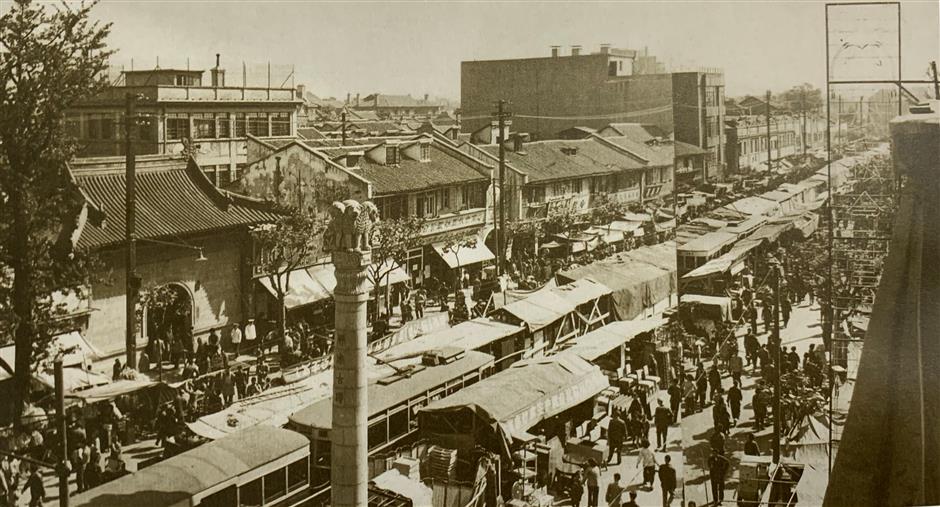 The "Buddhist Bathing Festival" in 1958

“The temple fair has contributed to the economy in the Jing’an Temple region and even the city’s commerce, which made it easier for urban and country people to exchange products. It also mirrored the time, background and social condition of Jing’an Temple area,” Zhang said.

According to the book named “Traces of Place Names in Jing’an District,” the temple started a bigscale renovation in 2000, which was completed in 2011. The temple now covers an area of 9,705 square meters and comprises 10 buildings, including a bell tower, drum tower, main gate and main hall. 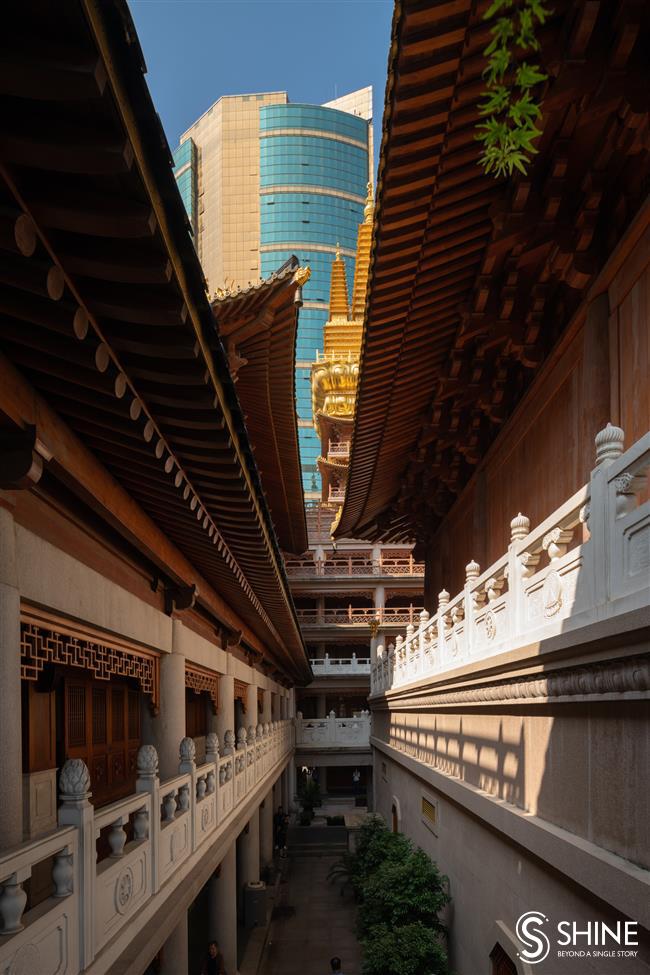 The temple that covers an area of 9,705 square meters is an architectural complex of 10 buildings.

The grand main hall as high as 26 meters was built with 46 teak wood columns in enormous sizes and topped by copper tiles. The centerpiece of the main hall is a Buddhist statue made of 15 tons of silver. The ground floor of the hall has a capacity for housing up to 1,000 people for a ceremony while a 1,000-square-meter bibliotheca is located underground.

“The temple is operated by 20 to 30 monks, mostly aged between 30 to 50, and many volunteers. Owing to the temple’s convenient location, we receive around 1,000 visitors every day including many foreign tourists or expatriate residents. It’s also a window of international Buddhism cultural exchange and we had visiting delegations from the US, Europe, Japan, South Korea and Southeast Asia,” said Ya Yun, who has worked in the temple for more than 20 years and acts as Jing’an Temple’s administrative office director.

He adds that Jing’an Temple once had a Buddhist school and nurtured several famous Buddhist monks. Today it attracts “white-collar” professionals who want to learn about Buddhism.

“The wisdom and mercy of Buddhism improves physical and mental health, family harmony and social stability, which benefit stressed people of modern society. Our temple also did extensive charity work to help the elderly, the poor and the young children lack of education,” Ya Yun said. 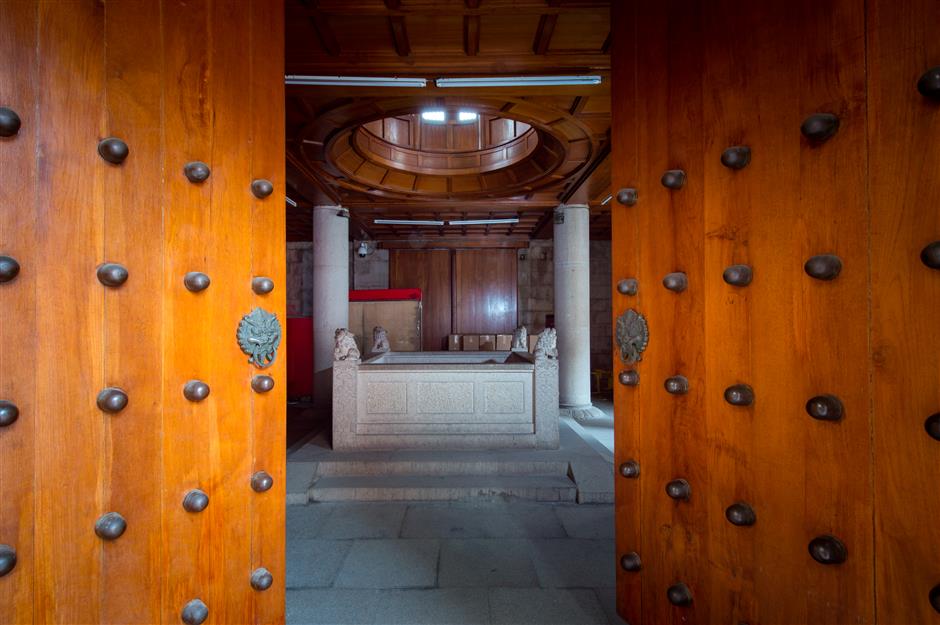 A replica of the former bubbling well now on the ground floor of the temple’s bell tower.

On the ground floor of the bell tower is a new revived bubbling well, a replica of yesterday’s “Sixth Spring of the Earth,” which the temple was named after and is famous for. From the outside, Jing’an Temple looks golden and extravagant in the middle of the city’s shopping malls and office skyscrapers. But the inner yard of the temple gives a serene, peaceful atmosphere and lives up to the name of a temple — repose, purity and peace — after one step into the main gate formerly fronted with a famous bubbling well. 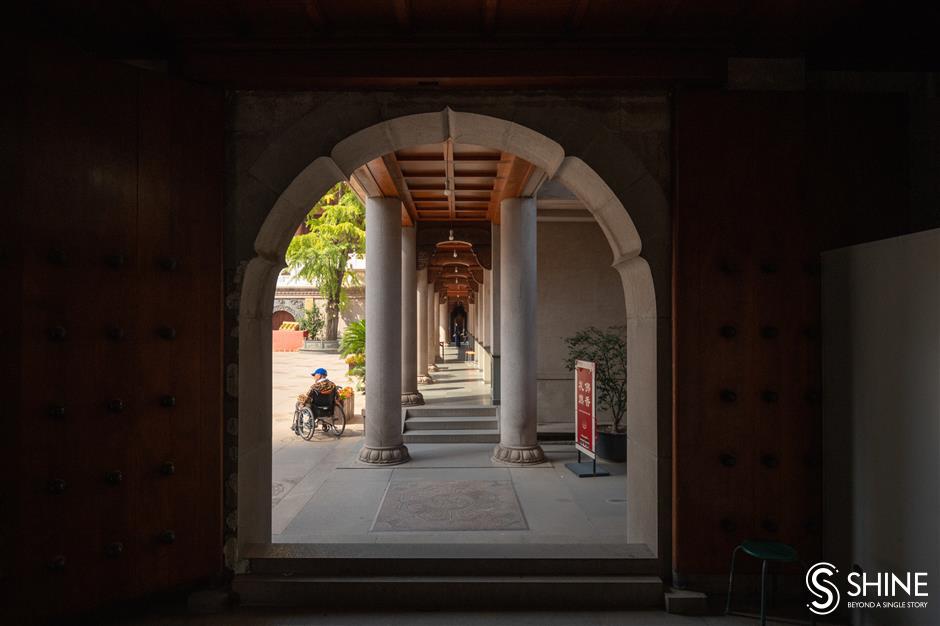 The inner yard of the temple gives a serene peaceful atmosphere.

To the uninitiated, the sullying of the pavements with yellow paint on all the roads around Bubbling Well and St. George’s for the last week or so now has a meaning, but to initiate it has meant that the Basket Fair of Bubbling Well Temple was due again. On Sunday, seemingly springing out of thin air, the fair was there, thronged with people, of all nationalities and all classes.

It is an annual show, this fair. For one week it blossoms from nowhere, to disappear as mysteriously as it came. For one week houses and shops are blotted out by mat sheds erected against them. Piles of merchandise clutter the pavements, forcing pedestrians into the roadway. Merchants clutter the roads, living in the midst of their goods for the seven days. And overall there is an atmosphere of calm excitement, or order despite the seeming chaos.

The origin of the fair goes back for generations. It started with the annual pilgrimage to the ancient Bubbling Well Temple, now almost lost in the midst of the modern buildings which surround it, this pilgrimage being in celebration of the legendary birthday of Buddha which, according to Chinese calculations, falls on the 8th day of the 4th moon, or May 10 this year. With this pilgrimage, peasants and artisans for many miles around used to bring with them bamboo work, baskets, and other specimens of their work in order to sell them to pay for the cost of their pilgrimage. From this the fair has grown till now it is almost entirely a commercial undertaking.