US merchant's Country Hospital a 'magnificent gift' to old Shanghai

Buildings are sometimes built from dreams. For American merchant Charles Ernest Rayner, who lived in old Shanghai, the dream was to build the best hospital for the city. With a donation of funds and his efforts to supervise the construction, the dream became a reality with the Country Hospital, which still perches in the compound of Huadong Hospital on Yan’an Road. 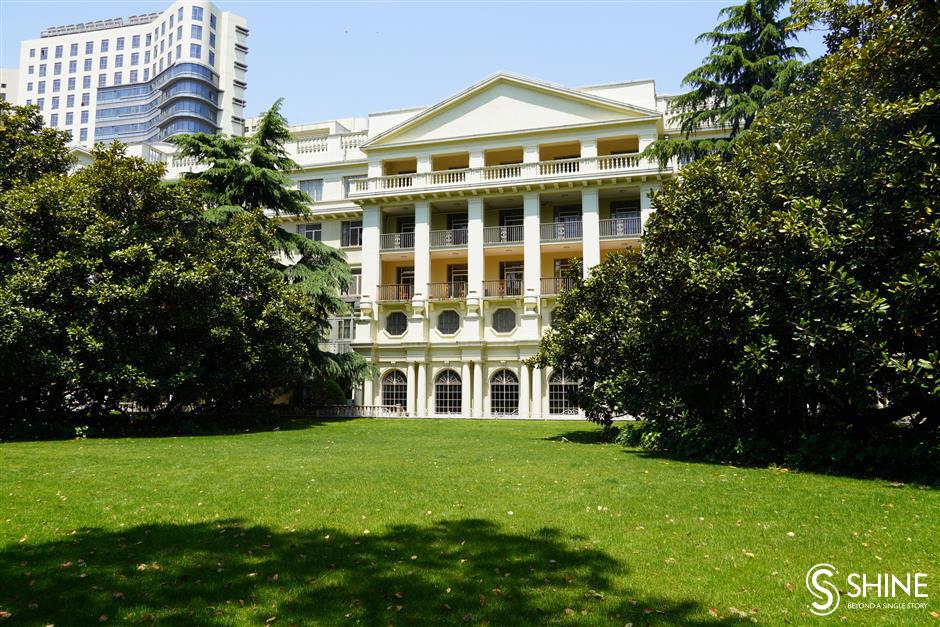 The Country Hospital still perches in the compound of Huadong Hospital on Yan’an Road.

The hospital was called a “magnificent gift” by local media when it opened its doors in 1926. Unlike other barrack-like structures, as many hospitals were, it was an unusually beautiful building designed by Slovakian-Hungarian architect Laszlo Hudec.

“The benefactor who asked Hudec to design an upper-class hospital for Shanghai expatriates insisted on the highest standards and the best facilities. And there was no budget limit — a perfect project for an architect. He also asked Hudec to keep his identity a secret, or the contract would be canceled,” said Professor Hua Xiahong from Shanghai Tongji University, author of the book “Shanghai Hudec Architecture.”

Covering 2,300 square meters, the five-story steel-concrete building had an ideal location, far away from the noise and bustle of the city but close enough to the heart of Shanghai to be within 15 minutes’ drive of the Bund.

As one of Hudec’s early works, the building was an Italian Renaissance- style design. According to a study by Italian architectural historian Luca Poncellini, Hudec chose an Italian Renaissance style due to the preference of the hospital’s benefactor who had spent much of his life in Italy.

The hospital is beautiful in every way. The southern facade features a tripartite vertical composition with balanced east and west wings.

The ground floor consists of double-columned arched windows and an arcade, while the second to fourth floors are treated with a unified approach. The fifth floor and the parapet are designed as three imposing pediments and make a powerful impression on visitors.

The most striking part of this hospital is the reception lobby, which in no way looks like a hospital’s ground floor. It’s more like a stylish hotel lobby, quiet and elegant. Hudec made extensive use of imported black, white and gray marbles on classical columns, the large staircase and flooring. The patterned wooden ceiling makes an interesting textural contrast with the smooth marble as sunlight pours into the lobby from a row of French windows. 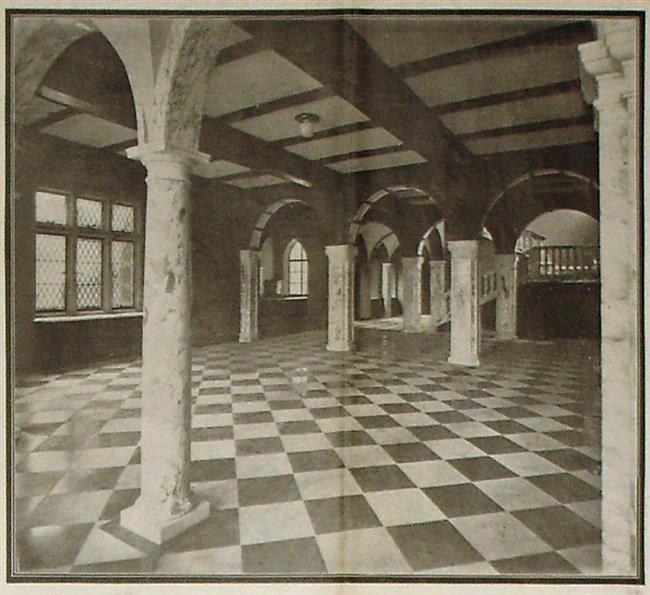 A file photo of the reception lobby of the hospital, which is quiet and elegant, more like a stylish hotel lobby. 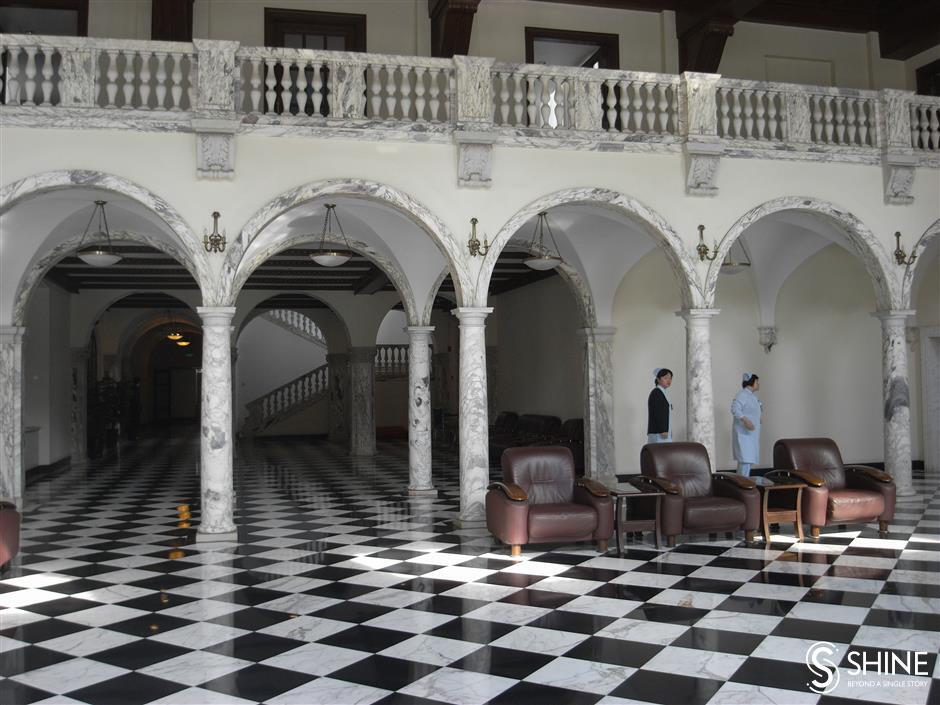 A recent photo of the reception lobby

“Hudec created a bright and open lobby for the hospital, which totally changed the usual cold, dim decor of a hospital,” said Hua, noting the Country Hospital was widely reported by Chinese and international media at the time for its scale and advanced facilities.

The old Shanghai Sunday Times newspaper wrote: “The rural, restful early Italian Renaissance effect reminds visitors of the courtyard and rooms of a villa in Tuscany.”

It was also the only hospital outside US territory to be discussed in the hospital section of the American journal Architectural Forum in December 1928.

“Bathroom and air-conditioning in every room were also rare and luxurious at the time,” Hua said. “The benefactor wanted patients to feel at home in the hospital. Air-conditioning was so important because the temperature of operating rooms in Shanghai could reach 42 degrees Celsius in summer.”

According to a report in the China Press on June 13, 1926, an atmosphere of a home was carefully created for this dream hospital.

The children’s creche featured nursery rhyme pictures painted all around the walls and little white beds brought from America. Dainty cross-barred curtains at the window let in a soft light from green blinds outside. In a large alcove off the nursery was a sunny playroom with jolly little child-size tables and chairs in cream enamel where one could draw pictures or play jacks on the rubberized, immaculate floor.

Upstairs in the sanitary operating rooms, dispensary and prescription rooms, all the glassware bottles and other utensils were brought in from Japan.

The splendidly equipped and ultra-modern maternity ward was one of the prides of the hospital and the infant nursery, where newborn babies were cared for, was “as clean and fresh and comfortable as modern invention can conceive.” 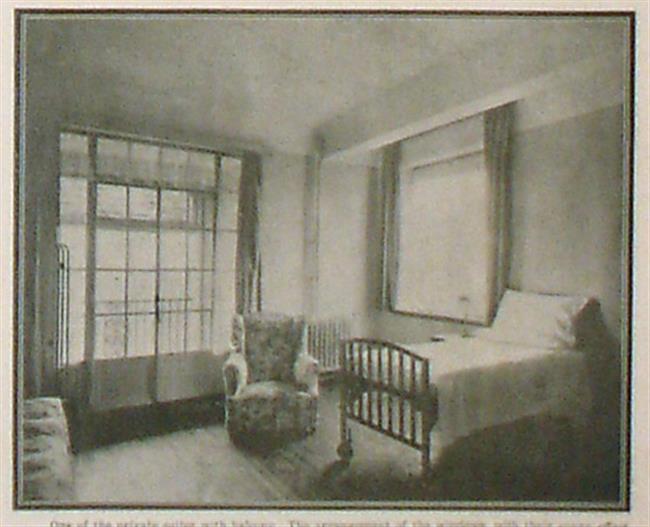 One of the private suites with a balcony

For a long time, the Country Hospital was classified as a classic-style architecture. But Professor Hua finds that it’s a modern, functional architectural practice disguised in “a classic coat.”

“I have also classified the hospital as a classic building in my master’s paper written in 2000. But after studying more historical archives, I found it was a misunderstanding. To realize the benefactor’s intensive ideal, the design of the Country Hospital always followed the principles of modernism which was ‘form follows function,’ whether in terms of the layout, the façade style, or the selection of materials and equipment,” Professor Hua said.

She discovered the classic-style façade and reception hall were not merely designed to pursuit fashion or conservative aesthetic beauty. It was “a rational selection” to deal with Shanghai’s summer heat and create a friendly medical ambience. The three sets of gigantic porches topped by gables were used to prevent summer sunlight.

“Like factories, hospital buildings are required to be economical, practical and designed in a concise, simple-cut layout style, which as later adopted by Renji Hospital, built in 1932, Hongqiao Sanatorium in 1933, Paulun Hospital and Margaret Williamson Hospital both designed by Hudec in the 1920s. But the dream of the benefactor was to build an upper-class, comfortable country sanatorium. So Hudec thoughtfully designed furniture, floor decorations and selected materials and colors to create a cozy, tranquil atmosphere of home,” Hua said.

The ground floor consists of arched windows and continuous arcade.

It was the first project Hudec was in full charge of and the first important work after he left American architect R. A. Curry’s firm to start his own business.

Since Hudec had obeyed the agreement, the benefactor was so satisfied that he enjoyed standing in the front row of the opening ceremony with no one knowing that he built the hospital.

Rayner’s life mirrored that of another heir-less wealthy old Shanghai resident — British merchant Henry Lester. Both of them had made money out of Shanghai and wanted to put it back into the metropolis for the benefit of the community. And they both emphasized charity projects for medical purposes.

A successful architect and landlord, Lester was the main contributor to the Lester Chinese Hospital (today’s Renji Hospital), and Lester Institute of Medical Research. Rayner, who had worked for German firm Carlowitz Co and owned a company named Housser & Co, thought of building a hospital for the international community.

The Country Hospital had enjoyed a favorable reputation after it opened, whose quality services attracted both foreign and Chinese patients. According to reports in Chinese newspapers Wenhui Daily in March 1946, Soong Mei-ling, wife of Kuomintang leader Chiang Kai-shek, came to the hospital to visit her husband’s famous Australian consultant William Henry Donald, who passed away in the hospital in November of that year. Song also accompanied American General George Marshall’s wife to the hospital for medical treatment.

Today the former Country Hospital serves as the No. 1 Building in Huadong Hospital, where many of the city’s VIPs received medical treatment.

The hospital grew to house more than 1,300 beds and is specialized in treating diseases for the elderly. The hospital’s head nurse, Chen Zhen, joined the first Shanghai medical team to go to Wuhan hospitals to treat COVID-19 patients in January. In Wuhan Jinyintan Hospital, she was widely called “the head nurse with big eyes” by her patients. 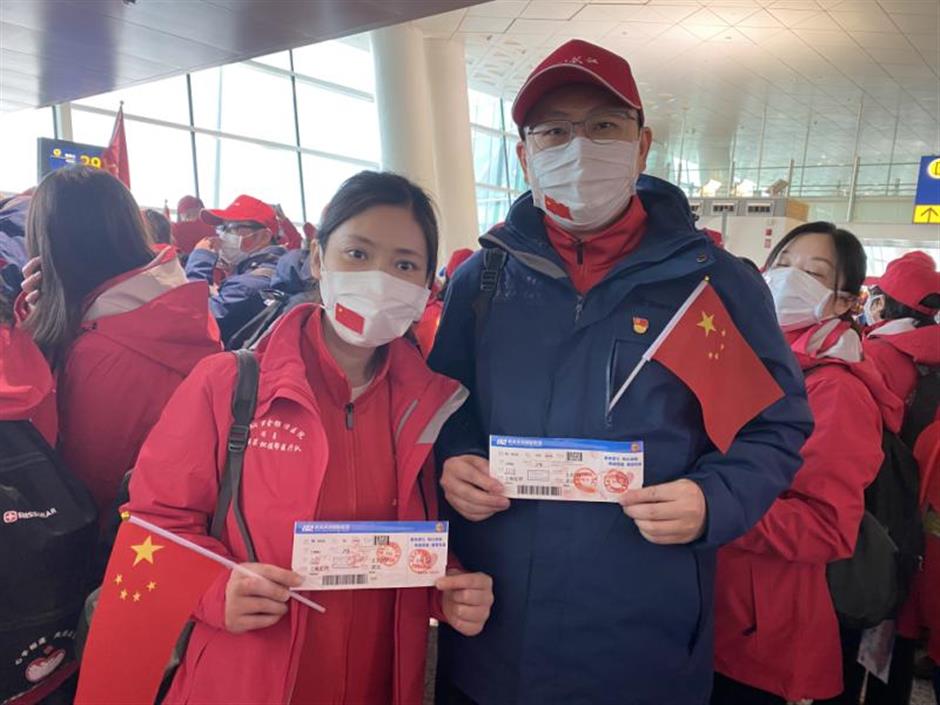 Early summer is a nice time to visit Huadong Hospital. Walking past the busy nurses, you will find a huge garden in the depth of the hospital. It is dotted with century-old pines, magnolia trees and centenarian patients sitting peacefully in wheelchairs.

According to The China Press on June 9, 1926, the gardens and beauty surrounding it were also the gifts of the benefactor who created them with “a labor of love.” It was him who planned and nursed the trees, flowers and shrubs ever since the hospital site was decided upon two and a half years before.

Now the lush lawn is a perfect setting to appreciate a hospital of love and care, sprayed in gold by the summer’s sunlight. 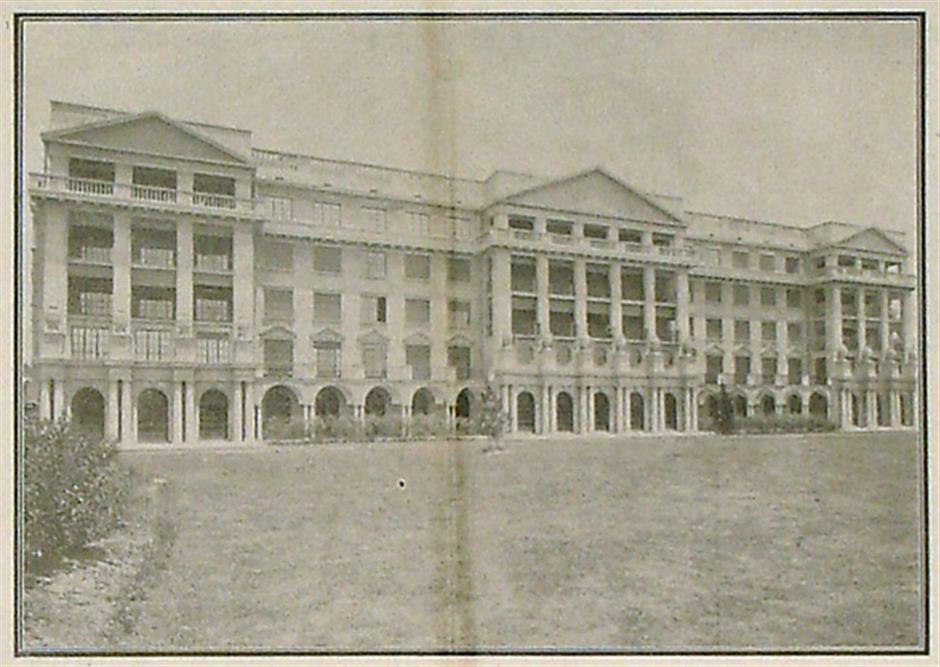 The Country Hospital was a "beautiful gift" to Shanghai.

Today: No. 1 Building of Huadong Hospital

Tips: For now, you are required to show the health code to enter the hospital. The entrance to the building, which serves the city’s VIPs, might be restricted. However, it is possible to appreciate the building from the garden.

At the request of The China Press the donor gives the following message to the public of Shanghai:

The donor and his wife, having spent the best part of their working lives in China, have erected and equipped the Country Hospital for the use and benefit of this cosmopolitan community, hoping thereby to contribute in some small measure to the reinforcement of that spirit of goodwill and cordial cooperation which has for many years united for the common good the many nationalities and races living and working here side-by-side.

The comforts of the Country Hospital are extended, without distinction of nationalities, race or religion, to all may be afflicted with ill health, and the donors ask for no greater reward than that this same spirit of cheerful goodwill for all and malice towards none may gradually and firmly unite all those whose lot it is to dwell in this city.

Provision has been made for those without means in two wards commemorating the names of two of the most public-spirited and charitable doctors Shanghai has ever known, and nothing would be more gratifying to the donors than to see the example thus set followed by other similar endowments of single beds or of entire wards.