Perched in a corner of the garden-style Ruijin Hospital, a pair of worn-out twin buildings with mottled facades look out over the metropolis.

Back in the 1930s, they were the city’s most advanced medical buildings and at the cutting edge of international health care. Designed by famous French architectural firm Leonard, Veysseyre & Kruze, the buildings later became known as the cradle of internal medicine.

“The twin buildings may look plain today, but they are the famous ‘Building 2’ and ‘Building 3’ of our hospital. A galaxy of China’s top medical masters, including five academicians of China’s Academy of Sciences, have worked here,” says Xu Shanhua, a researcher from the office of Ruijin Hospital Record, who has worked in the twin buildings since the 1970s.

Perched in a corner of Ruijin Hospital, Building 2 and Building 3 have become known as the cradle of internal medicine. 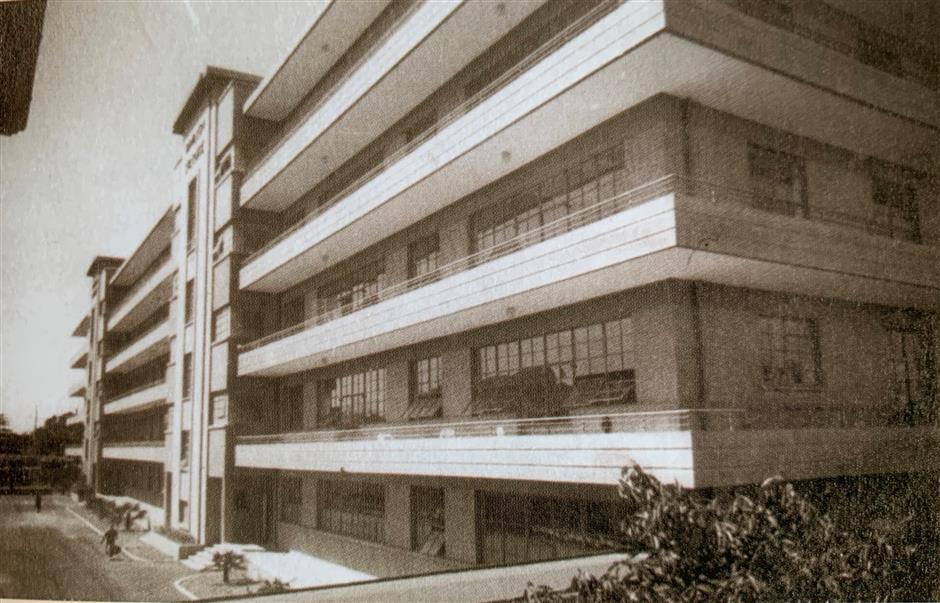 A file photo of the twin buildings which were named St. Vincent Pavilion and St. Louise Pavilion.

According to the hospital archives, the planning of the twin buildings started in 1932 when the predecessor of Ruijin Hospital, a French Catholic hospital named Ste. Marie’s, celebrated its 25th anniversary.

The hospital was built on a 106,720-square-meter site purchased by French father Le. T. R. Pere Robert, with support from the French municipal council. In 1906, today’s Ruijin Road No. 2, fronting the hospital gate, was named Route Pere Robert to honor the work of the French father, who later left Shanghai. His job was taken over by Father Prosper Paris, who opened Ste. Marie’s Hospital on October 13, 1907. The hospital’s Chinese name “Guang Ci” means “extensive charity and love.”

During its 25th anniversary in 1932, French consul general M. Meyrier said the hospital started from four modest buildings with a limited number of beds and a scarcity of equipment.

“The hospital has grown steadily during the past quarter of a century to its present splendid position of a modern and well-equipped institution. During the year 1931-1932 alone, St. Mary’s Hospital treated 7,080 patients. There were 560 births in the maternity department and 1,124 operations were performed, of which 756 were major operations. And finally, 2,240 patients were examined or treated in the Department of Radiology. All in all, in the first quarter of a century of its existence, nearly 100,000 patients had been cared for at St. Mary’s,” the consul general said in his speech reported by the North-China Herald on October 26, 1932.

In 1935, a grand ceremony, also presided over by Consul General Meyrier, was held to celebrate the completion of this fully equipped new St. Vincent Pavilion with 300 beds for poor Chinese male patients. Around 200 members of the French community and representatives of Chinese, British and American groups assembled in one of the larger rooms of the new building to attend the ceremony.

According to a report in the China Press on January 5, 1935, the main building has a frontage of over 200 feet and rises up four stories. The general offices of medicine and surgery occupy the three stories above the ground floor, which is allotted to ophthalmology and pediatrics. The “elegant though sober architecture” was to the credit of the firm Leonard, Veysseyre and Kruze.

“Spacious balconies surround all sides of the new building and will give patients a maximum amount of air and sunshine. The inner accommodation has been planned in collaboration with the best specialists in Shanghai: doctors of Ste. Marie’s Hospital and professors of the faculty of medicine of the Aurora University. The arrangements for the clinic of ophthalmology are due to Dr. Motals, director of the clinic of ophthalmology, Cochin-China,” the China Press report said. 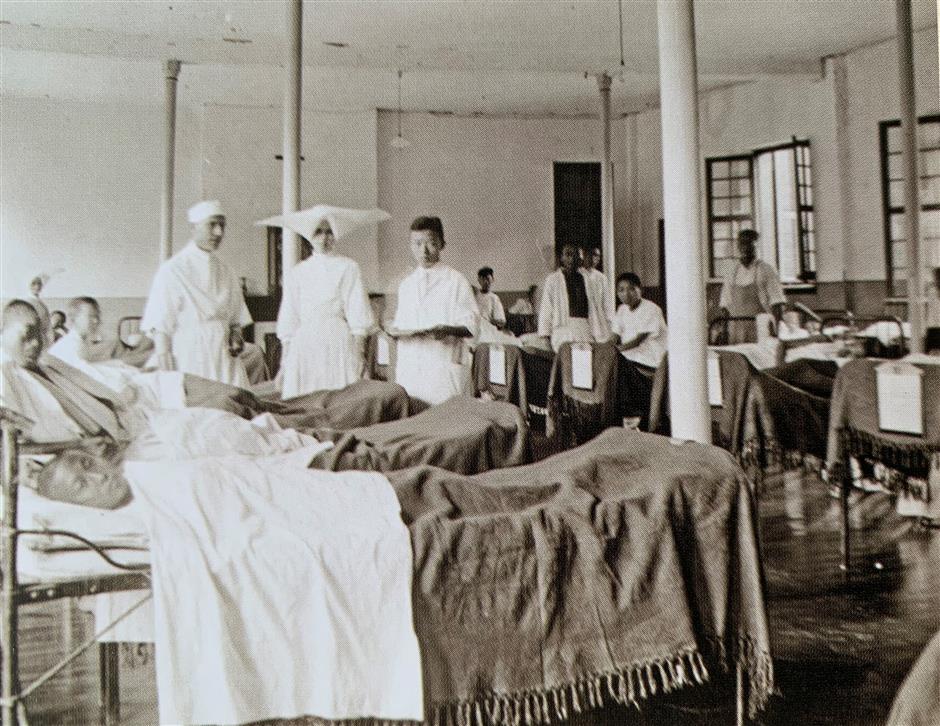 A French doctor and a French sister visit patients in the St. Vincent Pavilion.

Since 1912, Ste. Marie’s Hospital has been a major teaching hospital for the adjacent Aurora University.

According to a full-page advertisement of the French architectural firm, in a 1934 local French newspaper, Leonard, Veysseyre & Kruze designed several other buildings for the hospital, including the Pasteur Pavilion and the Isolation Pavilion.

Leonard, Veysseyre & Kruze is an unfamiliar name to many but the firm’s architectural works, such as the white, classic Okura Garden Hotel and the grand, chocolate-hued Bearn Apartments on Huaihai Road, are familiar to many eyes in Shanghai.

The firm was co-founded by two talented French architects, Alexandre Leonard and Paul Veysseyre in Shanghai in the 1920s. Its project in 1925, the new Cercle Sportif Francais project (today’s Okura Garden Hotel) brought huge success to the firm. The third partner, Arthur Kruze, joined them in 1934.

As one of Shanghai’s first Art Deco practitioners, this prolific firm had changed the look of the former French Concession during the “golden age” of Shanghai in the 1920s-30s.

According to a new edition of “The Evolution of Shanghai Architecture In Modern Times” by Tongji University professor Zheng Shiling, it was estimated that more than 60 buildings still exist in Shanghai, including the twin buildings in the Ruijin Hospital.

“Leonard, Veysseyre & Kruze was the most important French architectural firm in modern Shanghai, which made a great contribution to the architectural design of modern architecture and tall apartment buildings in Shanghai. The firm has designed many public buildings and institutions in the French Concession. Their works demonstrate a variety of architectural genres and styles, including residences, apartments, offices, churches, cloisters, schools, hospitals, police stations, clubs and museums. Their work, which showcases a flavor of French culture, had largely influenced the forming of urban spaces in the Shanghai French Concession,” professor Zheng writes in his newly released book.

Another Tongji University Professor Liu Gang, an expert on the former French Concession, noted that Alexandra Leonard was an interesting man and a genuine internationalist. “He was gifted and free-spirited. I believe Leonard was the spirit of the firm,” Liu said.

However in 1934, just before the elegant, sober medical building was completed, Leonard’s wife Elizabeth died of disease in the hospital at the age of only 35, according to the North-China Herald. The architect later remarried but mysteriously disappeared from Shanghai in 1946. Veysseyre went to work in Vietnam in 1937, where he designed many Art Deco buildings that mirrored the firm’s Shanghai practice before returning to France. Kruze went to Hanoi and people never heard of him any more. 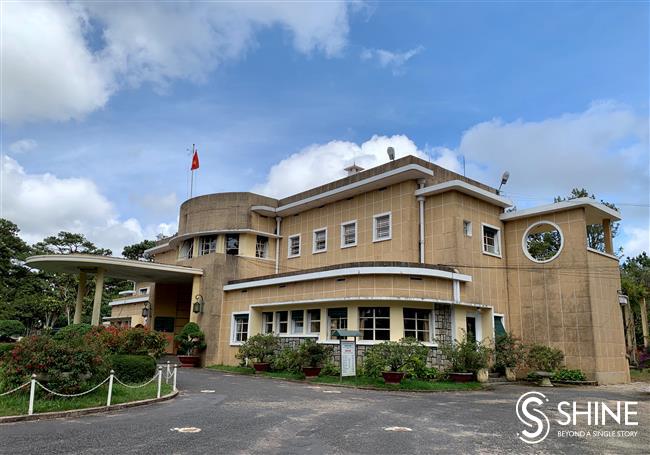 After the new St. Vincent Pavilion was completed in 1935, Ste. Marie’s Hospital accommodated 700 beds, which made it “in the foremost plane among the largest hospitals in Shanghai” and constituted “one of the most important medical organizations in the Far East.” 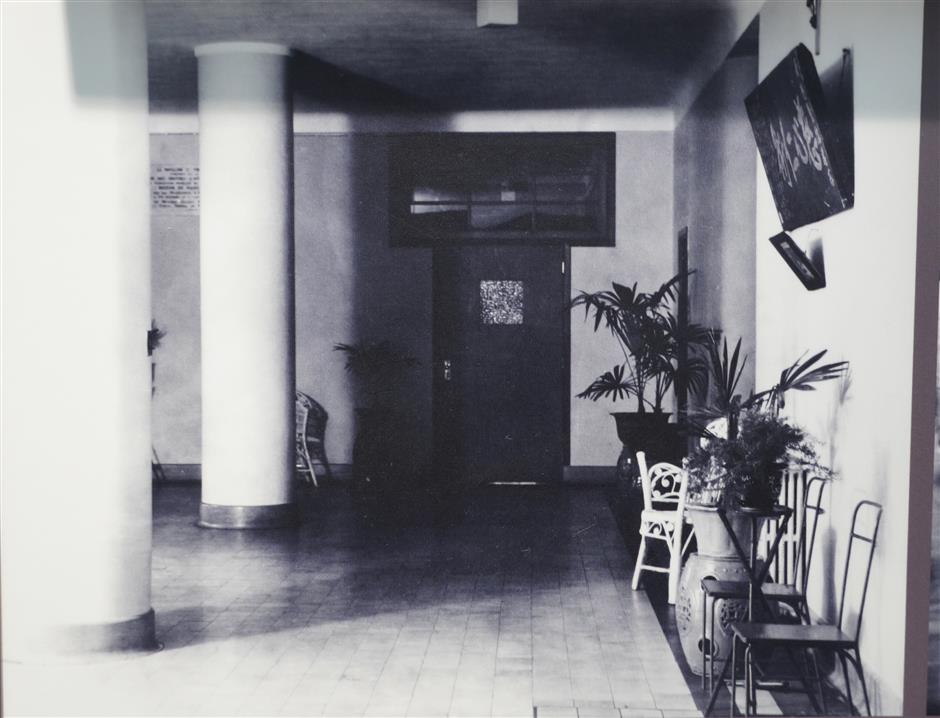 A file photo of the interior of Building 2 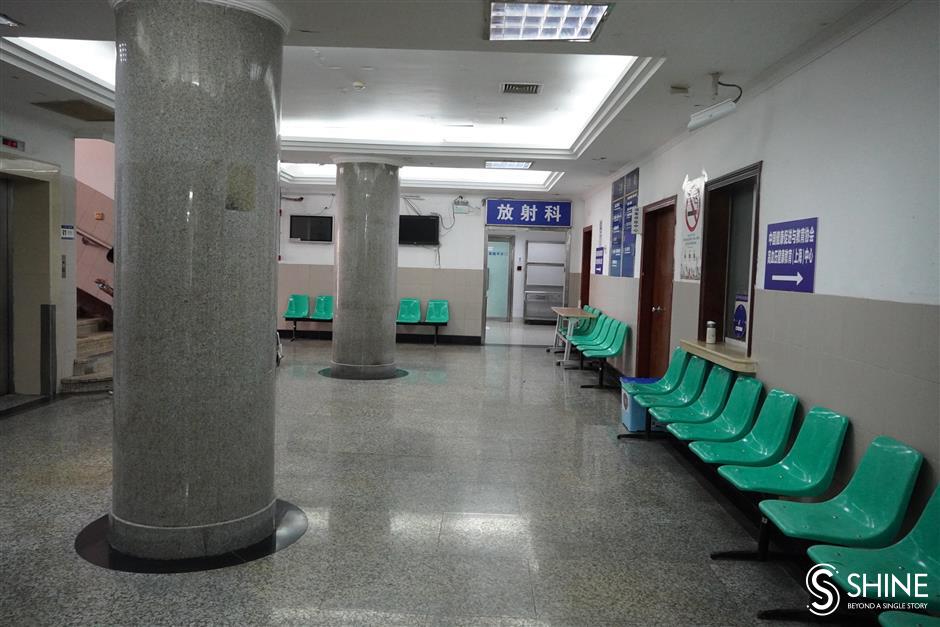 A recent photo of the interior of Building 2

In 1940, St. Louise Pavilion, the second of the twin buildings, was built adjacent to the St. Vincent Pavilion for poor Chinese female patients.

“The twin buildings were built five years apart, but they were smartly designed as an entity,” said Xu Shanhua, showing an unnoticeable crack between Building 2 and Building 3, which looked like one large building at a glance.

In 1951, the hospital was taken over by the Shanghai government, renamed several times and got its present name, Ruijin Hospital, Shanghai Jiao Tong University School of Medicine, in 2005.

The hospital archives reveal the twin buildings embraced a “peak time” in 1952 when they were combined and assigned to the internal department of the hospital.

Kuang Ankun, founder of this department, had nurtured five majors and numerous professionals of internal medicine in the buildings. A galaxy of China’s renowned medical masters, including Chen Zhu and Chen Saijuan among the five academicians, have all worked and developed their career from here. 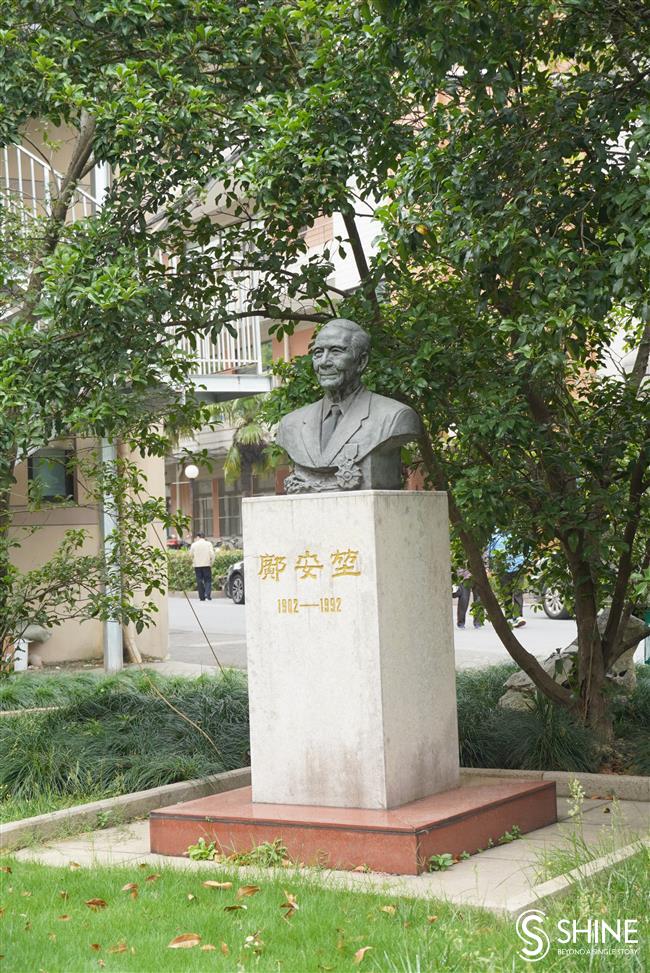 A statue of Kuang Ankun, founder of internal medicine department of Ruijin Hospital.

Today the garden-style compound of Ruijin Hospital is still sprinkled with several other historical buildings in classic style, including Building 8, the former maternity ward built in 1922 and Building 9, one of the only four structures built in 1907 upon the founding of the hospital. The latter now serves as a museum of hospital history.

A recent photo of Building 8 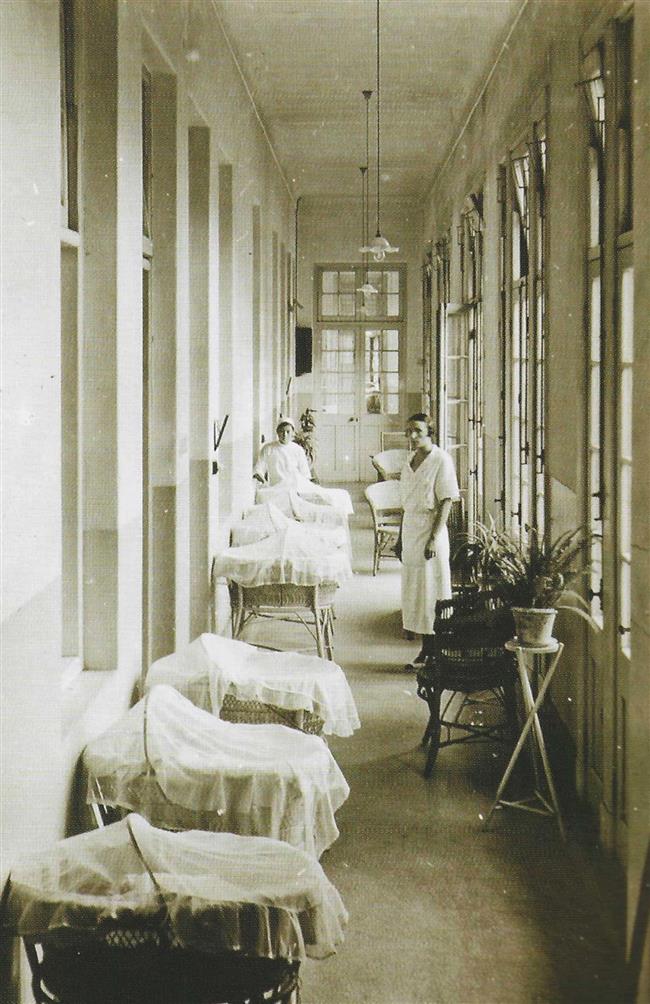 Building 8 was the former maternity ward built in 1922.

And the Ruijin Hospital has developed to be a large hospital complete with medical treatment, education and research facilities. Covering an area of 110,000 square meters, the hospital now has 4,402 employees, 1,893 beds and has won numerous awards for superb medical skills and services. With the help of cutting-edge technology such as AI and 5G, the hospital sent several medical teams to Wuhan hospitals who had done a great job in saving COVID-19 patients. 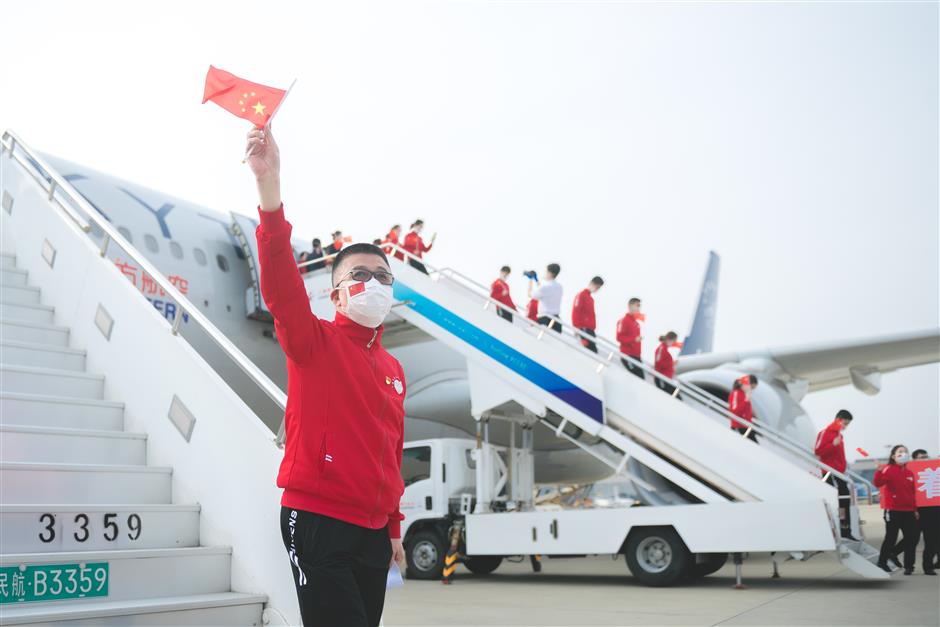 Led by Chen Erzhen, vice president of Ruijin Hospital, the third medical team from Shanghai disembarks from a fight from Wuhan on March 22.

The twin buildings, though mottled and worn-out, are still functioning as the department of internal medicine and witnessing a new chapter of care and love in this Shanghai hospital.

Tips: For now, you are required to show the health code to enter the hospital. The entrance of the historical buildings might be restricted but the facades can be admired.