To music purists, the next best thing to attending a live concert is to hear music on vinyl records. It may be outdated to most people, but vinyl possesses a more “real” sound than CDs or digital downloads.

The recent announcement by Chinese pop singer Jay Chou that he will release vinyl versions of all his 14 albums has put a renewed spotlight on the old format of music recording.

Rather coincidentally, Shanghai Vinyl Records Association also announced its formation last month, dedicated to promoting vinyl recordings and looking for new innovations in the development of the format.

Are we witnessing a revival of vinyl in China? According to Xu Bing, president and founder of the new Shanghai Vinyl Records Association, listening to vinyl records is a retro trend, especially for the younger generation. Vinyl is carving out a niche market.

Vinyl records, known as gramophone recordings in their initial stages, date back nearly 150 years. At first, the discs were commonly made from an abrasive shellac compound and were noisy when played. In the 1940s, records began to be produced from polyvinyl, hence the name vinyls.

In 1948, Columbia introduced the vinyl LP, or long-playing record, with an analog sound and a speed of 33⅓ revolutions per minute. That became the standard of the recording industry for years.

Vinyl slowly faded from popularity with the advent of magnetic tape recordings and then compact discs, followed by digital downloads and music-streaming services.

So why go back?

Despite being easily scuffed, scratched, warped and a bit costly nowadays, vinyl’s analog imperfections add warmth and crackle to sound, making it “more real” for some listeners. 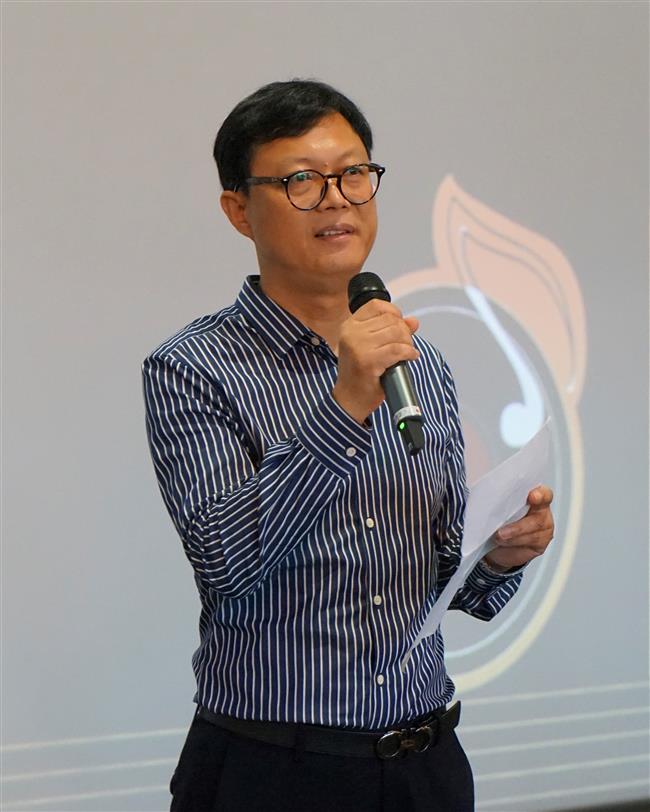 A noticeable revival of vinyl started about 10 years ago around the world. The global sales of vinyl records chalked up annual increases of more than 10 percent in the past few years. Stories specializing in vinyl popped up. Still, the old recording format accounts for no more than 6 percent of world music sales.

“Shanghai was China’s first city to introduce vinyl records at the beginning of the last century,” said Xu. “The last vinyl production line of that era in China, located in Shanghai, closed in the 1990s. The establishment of our association is a reflection of the city’s long-standing connection with vinyl culture.”

According to the association estimates, some 60 percent of the newly produced vinyl records in China are replicas of old records and albums. They cover Chinese mainland ballroom songs from the 1930s to 40s, Hong Kong and Taiwan pop songs dating back to the 1970s, traditional operas, and Chinese artistic and patriotic songs.

“It’s usually the musicians and singers confident about their market value who consider releasing vinyl albums,” said Xu. “Some choose to release new single hits through vinyl. Some make a small number of vinyl records to give as gifts.”

Xu estimates there are about 100,000 vinyl record users in China.

There are no reliable figures on the production or sales of vinyl recording. According to one Guangdong-based vinyl distributor, sales increased about 30 percent in the period from 2017 to 2019.

The charm of vinyl records, for aficionados, lies in the return to a “live feeling,” thanks to the traditional recording method. Sound is spread by vibration of air and simulated as current, which drives the magnetic head on a record.

But for most people, vinyl records are a luxury hobby.

Take Jay Chou’s vinyl albums for example. The pre-sale booking price for each vinyl album was set at around 460 yuan (US$65). The complete set of all his 14 albums of the past two decades costs about 6,400 yuan.

The official release of the records will be in November. Buyers who don’t have phonographs to play the records will have to buy them. Prices vary from 1,000 yuan to hundreds of thousands of yuan. 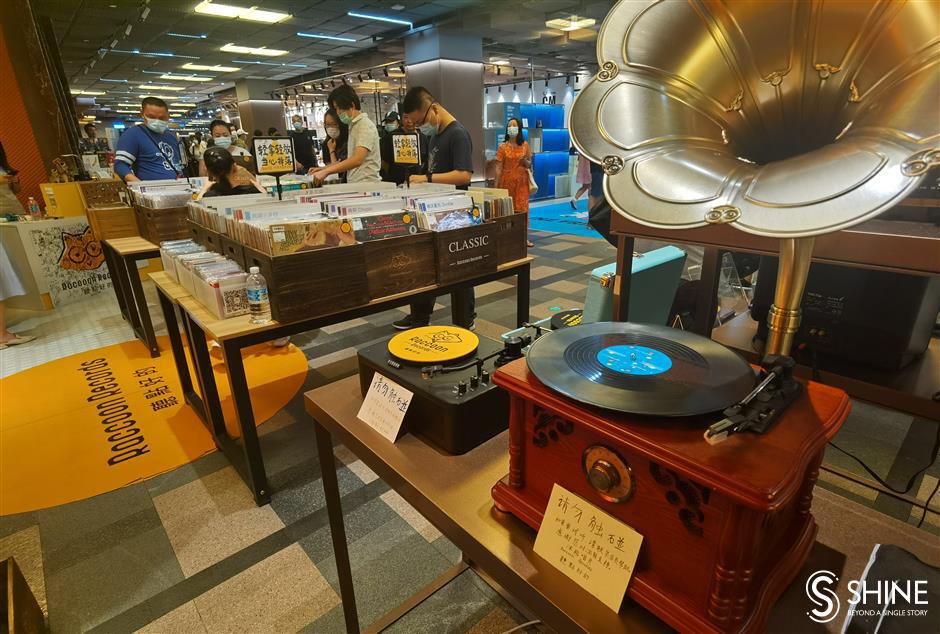 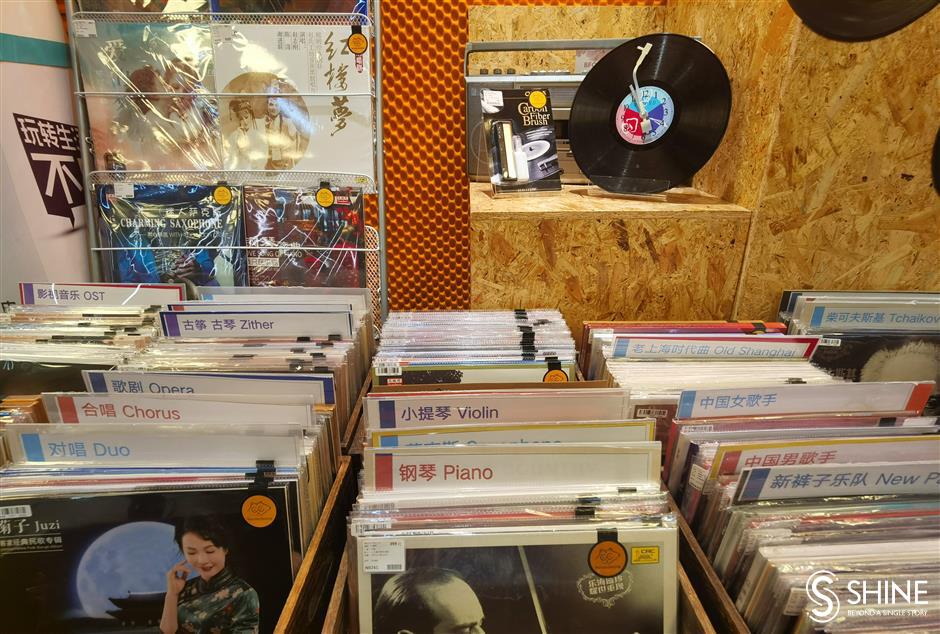 Raccoon Records, a vinyl record shop with a wide collection, seeks to reproduce warmth and connection between people.

At Raccoon Records, a vinyl record shop located in Huangpu District, more than 1,000 vinyl records are on display. They cover almost all music genres, from classical and pop to choral and traditional opera. Most newly released records are priced between 200 and 400 yuan. Classical music albums can be acquired with about 100 yuan. Limited versions or commemorative albums of some popular singers and bands are usually priced at more than 500 yuan.

For Rico Zhang, founder and chief executive of Raccoon Records, the shop means much more than just selling and buying vinyl.

“Just like the vinyl records, the shop wants to reproduce the warmth and connection between people, and create a sense of involvement,” Zhang told Shanghai Daily.

Most visitors to the shop, which is actually a small booth in a mall, are curious passers-by. But the shop does have a certain number of regular customers, who often ask Zhang for recommendations or seek information about certain records every time they stop by.

“Sometimes I chat with them for hours, and the topics are not limited to music,” said Zhang.

Zhang didn’t give sales figure for his shop, but said that some 60 percent of income comes from the online store of Raccoon Records. Despite that, he said the shop is essential to keep open, comparing it to status of vinyl records in an era dominated by digital downloading. 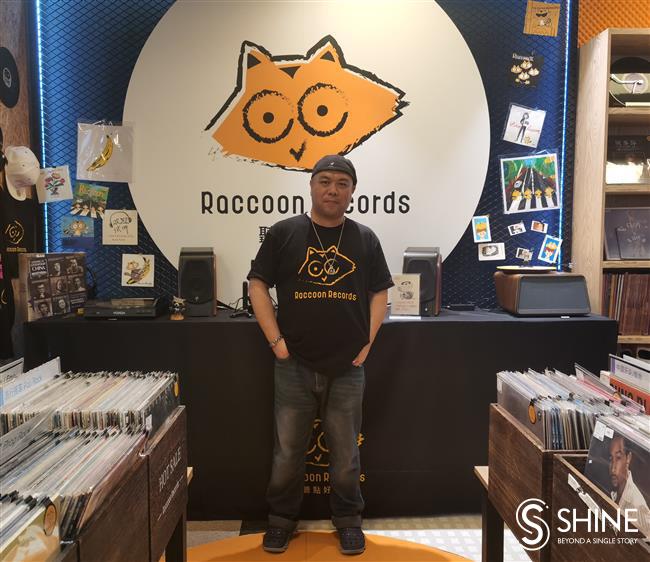 “Music recorded on vinyl relies on physical transmission, and that’s why it achieves high fidelity,” said Zhang. “On the other hand, digital music is more accurate but loses some of the physical qualities. It’s somewhat like online communication, which is efficient and convenient but can’t replace face-to-face communication.”

Zhang’s customers purchase vinyl records for various reasons. Some are fans of a certain singer and disappear when a complete set of the singer’s albums is acquired. Some customers buy the records on impulse, or to try out something new or just to show off. Some buy the records out of nostalgia for the past, and some even buy them as décor in a new home.

“The development of China’s pop music encountered a 30-year hiatus, starting from the 1950s, which happened to be the golden era for vinyl globally,” said Zhang. “To be frank, I don’t quite agree that we are witnessing a revival because vinyl hardly took off in China. But I’m happy to see people willing to get to know about the old format of music.”

Zhang said he was inspired to dive deeper into vinyl by a customer.

“There was one customer who wanted me to help him look for a vinyl record released on a specific day in 1959, which was the birth date of one of his relatives,” Zhang said. “He wanted to give it as a birthday gift, and that made me think. What if I could develop vinyl record gift products, as well as other side products, to attract customers other than vinyl music fans?”

The shop introduced vinyl record cleaning and repair service this year, and Zhang hosted talks to share his vinyl knowledge with the public before the outbreak of the novel coronavirus. 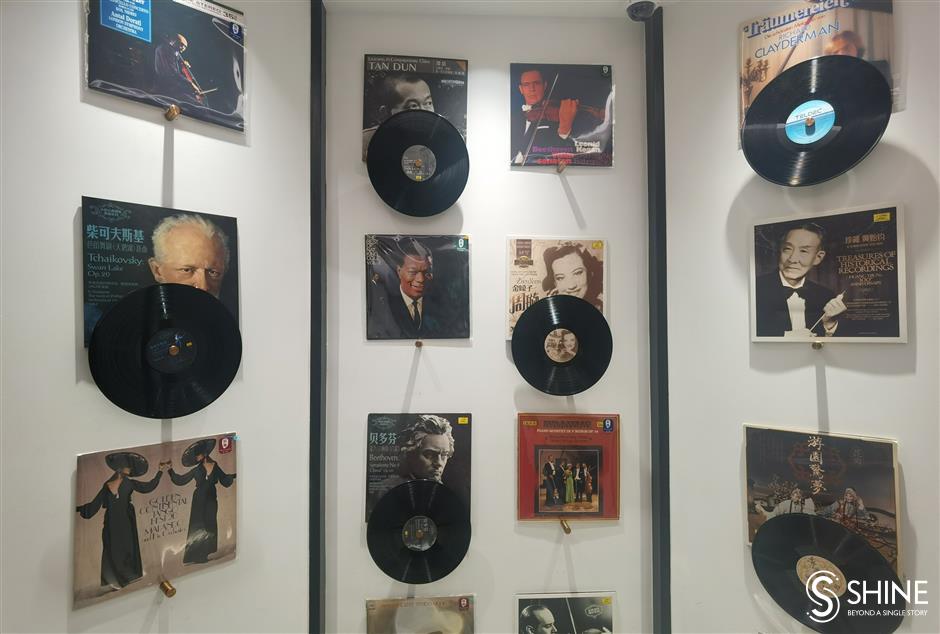 In another vinyl record store, Jiaoji located in the Blackstone Apartments in Xuhui District, music lovers can borrow vinyl records after buying membership cards. Members can borrow up to 360 records a year at a cost of 999 yuan.

Both Raccoon Records and Jiaoji are members of Shanghai Vinyl Records Association. The association has attracted more than 70 musicians, academics and businesses involved in music publishing and sales to its membership roll.

“The association will continue to grow,” said President Xu. “Apart from studying the history and development of vinyl records in China, the association is setting its sights on future possibilities. It’s not about reminiscence. Instead, we want to give vinyl culture a new life in a modern era.”

Apart from organizing talks and exhibitions, the association is considering organizing a vinyl record market in Xuhui District in the near future.