Yueyang Road is flanked by plane trees and a rainbow of garden villas. A century ago, the creamy-hued villa at No. 190 was a private hospital founded by the famous “New brothers,” both of whom had been dedicated medical practitioners and contributed to Chinese health care. The hospital name “Linsheng” comes from their names — “Huilin” and “Huisheng.” 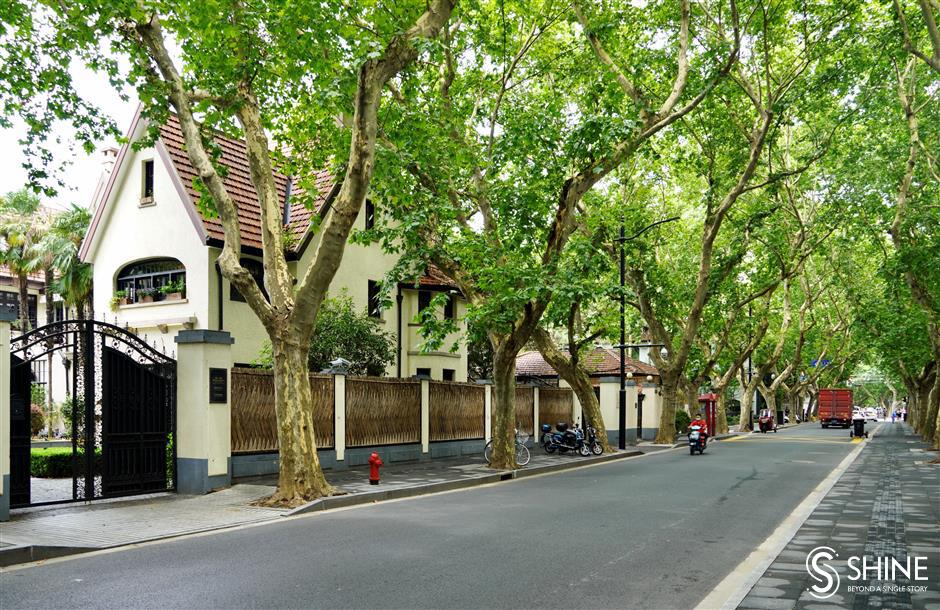 Yueyang Road is flanked by plane trees and a rainbow of garden villas.

“It was a small hospital, but there were many figures and stories behind the building. As one of China’s earliest Western hospitals, it was founded in 1920 by Dr Niu Huilin (Way-ling New) and Dr Niu Huisheng (Way-Sung New), sons of Niu Shangzhou (Shang-Chow New) who had been sent to study in the US by the Qing’s royal government,” said writer and historian Song Luxia.

The Linsheng Hospital, also known as Ling Sung Hospital, is located in a British-style three-story villa. The steep roof capped by red tiles contrasts with the creamy-hued walls. The facade is graced by arched windows, a terrace, a lovely balcony and a curved porch of Doric columns and vase-shaped railings. The villa faces a garden with a fountain and palm trees.

On November 20, 1937, Niu Huilin, the elder brother, passed away in the hospital building at the age of 48, six months after his younger brother Niu Huisheng died, aged 45. 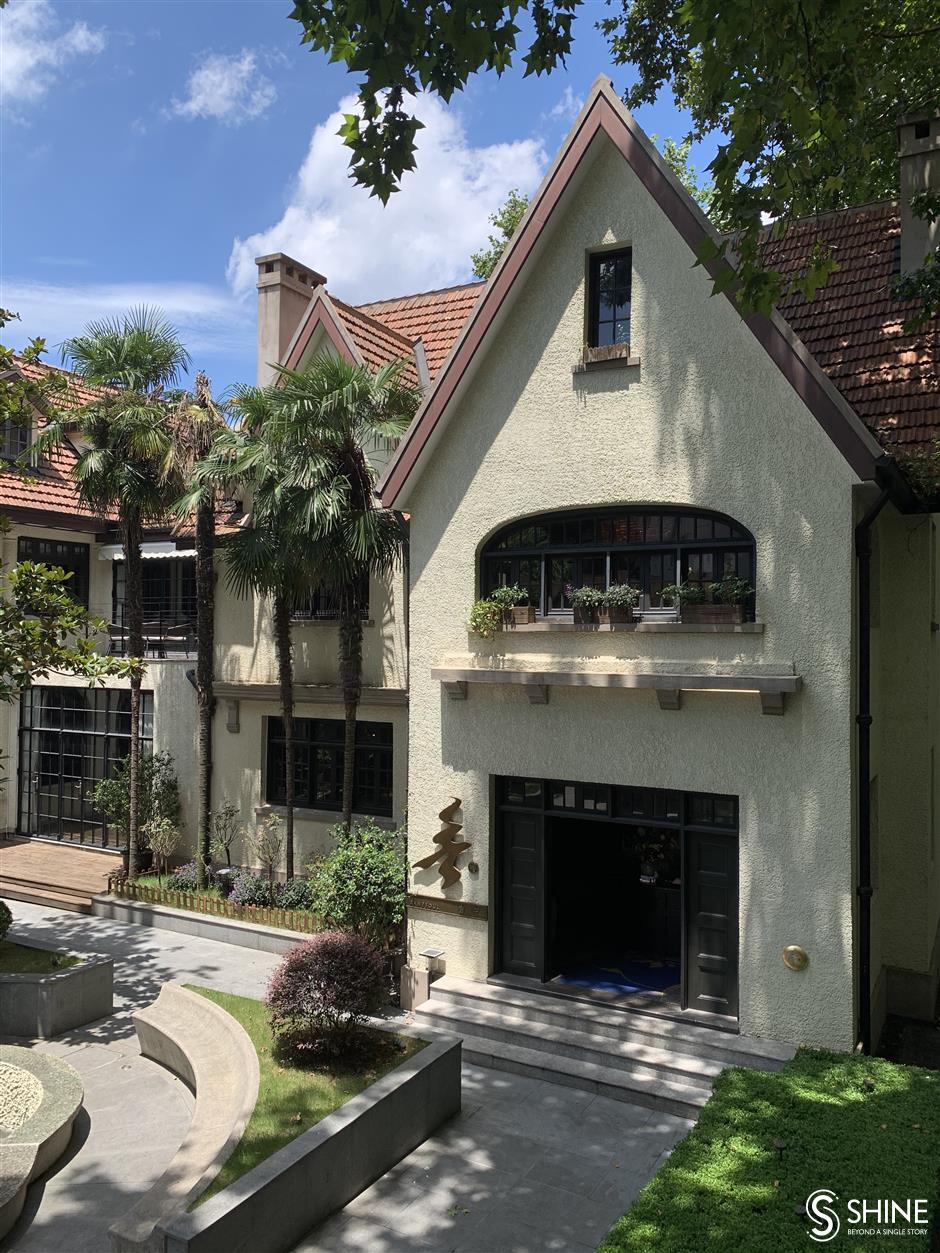 A century ago, the creamy-hued villa at 190 Yueyang Road was a private hospital founded by the famous “New brothers” both of whom had been dedicated medical practitioners and contributed to Chinese health care.

In many books about Shanghai medical history, their names crop up everywhere. They founded, managed, operated and participated in several medical institutions and saved so many lives. It’s incredible how the brothers achieved so much during their short lives.

The excellence of the siblings undoubtedly lies with their father, Niu Shangzhou, who was one of the first Chinese students to study in America. On his return Niu was made secretary of the Jiangnan Dock and Engineering Works of Shanghai.

According to a study by scholar Zhang Shengfen from Chinese Medical Society, the lives of Niu’s two sons mirrored each other. Both Huilin and Huisheng studied medicine overseas after graduating from Shanghai St. Johns School at the age of 18. Huilin studied in the medical college of Cambridge University in the United Kingdom while Huisheng chose the medical college of Harvard University in the US.

In 1914 Huilin had his early medical training at London Hospital after graduating from Cambridge University with a PhD degree in medicine. As the Great War broke out, he joined the staff of the Ipswich Military Hospital (1914-1916) where he acted as superintendent. From 1916 to 1918, he was the house surgeon at the Middlesex Hospital under the famous surgeon Sir John Bland Sutton. 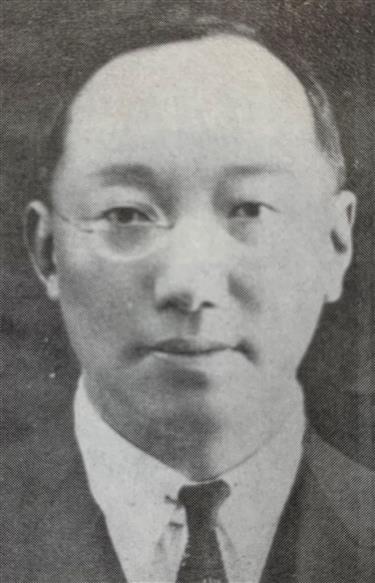 Also in 1914, Huisheng graduated from the Medical School of Harvard University with a M.D. (Medical Doctorate) degree. During and after his college years, Huisheng had considerable practical experience, being house physician and surgeon of St Luke’s Hospital, New Bedford from 1914 to 1915.

Both Niu brothers returned to China after gaining experience overseas. In 1915, Huisheng was the first to go back to China where he took charge of the Department of Anatomy at the Harvard Medical School of China in Shanghai, which was a cooperative project between Harvard University and Chinese Red Cross General Hospital, predecessor of today’s Huashan Hospital.

However after witnessing the suffering of many Chinese patients with fractures, he went to the US again to study orthopedic medicine from 1916 to 1918 and returned to take charge of the department of orthopedic surgery, Peking Medical College.

Huilin returned to China in 1918 and later became head of the Lester Chinese Hospital surgical department, which developed into today’s Renji Hospital. In 1920 he founded Linsheng Hospital on Route Ghisi (today’s Yueyang Road) with his brother. 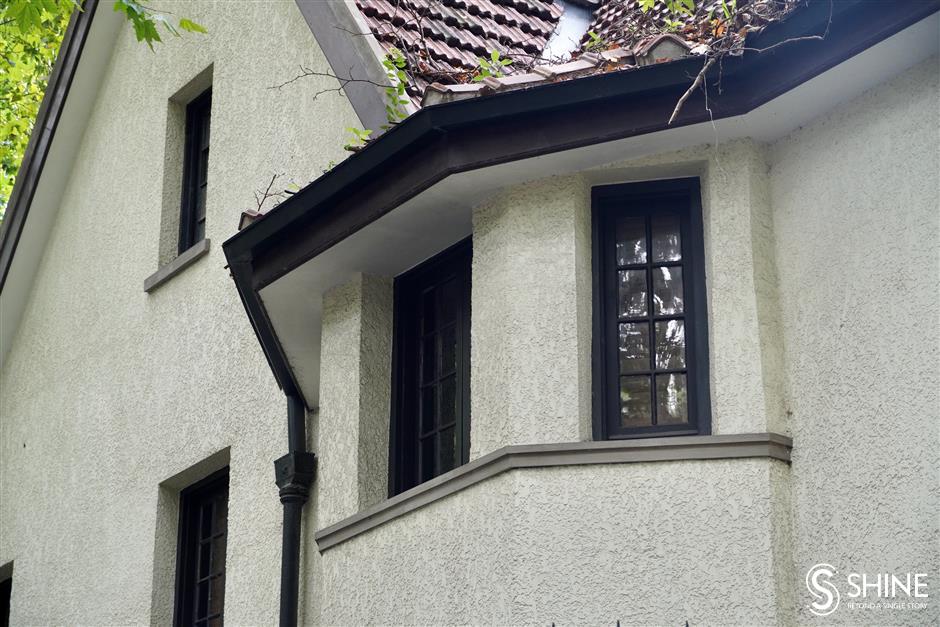 The Linsheng Hospital is located in a British-style three-story villa.

Shanghai historian and writer Song Luxia says soon after Linsheng Hospital was opened, the English governor of Hong Kong, who was severely ill, telegraphed the British government to send a good doctor.

“The ministry of health replied that there was no need to dispatch a doctor from London. Dr Niu Linsheng of Shanghai Linsheng Hospital graduated with a PhD of medicine from the Cambridge University. The British medical circle knew about Niu’s skills through his performance as a surgeon during World War I. So Niu was invited to Hong Kong and cured the governor. That won him a reputation in Hong Kong and Shanghai and Linsheng Hospital became a renowned medical center,” said Song, who has researched Shanghai prominent families for decades.

In 1927, Linsheng Hospital received a heavily injured patient whose left leg had been shot three times. His bones were broken and set wrong. According to Mu Xin’s article named “Chen Geng in Shanghai,” Niu Huilin suspected the patient was a robber and was reluctant to treat him. The patient then claimed to be general Chen Geng, who was shot during a battle in Nanchang of Jiangxi Province some two months before. Niu was touched by Chen’s honesty and the brothers used their superb medical skills to save the general’s left leg from amputatation. 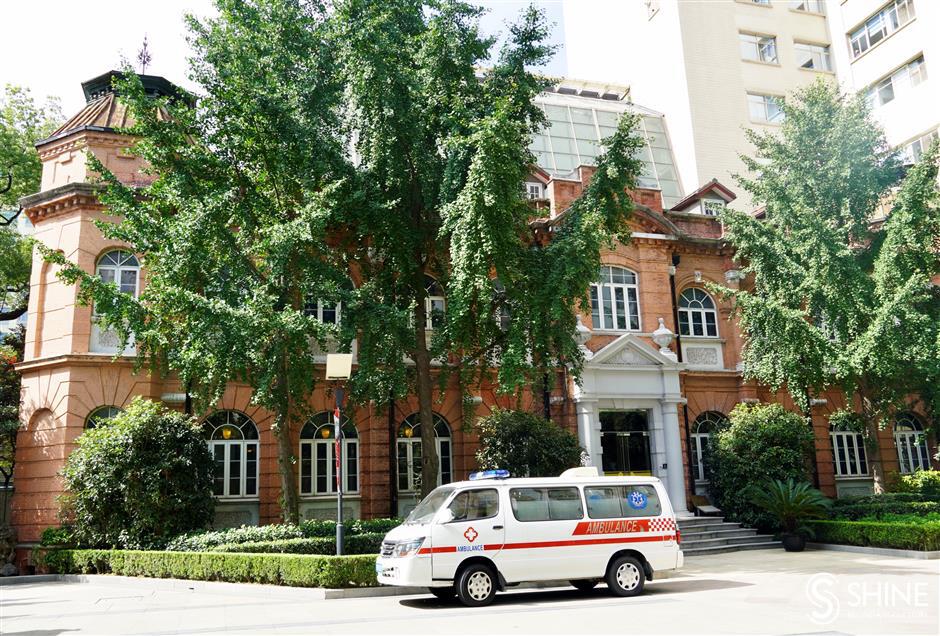 Both the Niu brothers had worked in the Chinese Red Cross General Hospital, predecessor of Huashan Hospital.

Apart from his hospital duties and practices, he would volunteer from time to time to do emergency work, according to his obituary published on the China Press on November 21, 1937.

“In 1923 he headed a red cross unit to Lincheng to render medical aid to foreign and Chinese captives in Shantung. During the great earthquake in Japan in 1923, he took a group of Chinese doctors and nurses to Japan on an errand of mercy. During the Kiangsu-Chekiang civil war in 1926, he again headed the red cross work. Related to the famous Soong family, the brothers entertained Generalissimo and Madame Chiang Kai-chek when China’s foremost couple came to Shanghai following the Sian coup,” the report says.

When Huilin’s medical career was flourishing in old Shanghai, his younger brother also played important roles in the medical circle.

According to his obituary in the North-China Herald, on May 12, 1937, Niu Huisheng had held office as secretary and counsellor in several national medical bodies. He became the first president of the new Chinese Medical Association.

In 1923, Huisheng was introduced into the “Who’s Who in China” column by The China Weekly Review on November 24.

When Niu Huisheng passed away in 1937, a local English newspaper commented that “China has lost a great human personality.”

“The death of Dr Way-sung New at his home at 852 Route de Siccawei, at the age of 46, early morning removes not only a man influential in medicine, but one who was a man of vision and courage in all human relationships. He devoted his energy to pushing forward the work of this national medical body, thinking of it by day and dreaming of it by night.

Even during the last week of his life, while lying desperately ill, he woke up continually to mention the work of the association. Dr New was conspicuous as an organizer and coordinator, a man of courage and firm in facing difficulties, but always full of grace in his approach to difficult human personalities and situations,” the newspaper said.

According to Zhang Shengfen’s research, a severely ill Huisheng attended the Chinese Medical Association’s 12th grand meeting, which was hosted along with the completion of Shanghai Medical Center and Shanghai Zhongshan Hospital. He passed away three weeks after this important meeting.

In 2015, officer Yuan Huiyun of Renji Hospital received a visitor named Niu Enmei, who was daughter of Dr Niu Huilin.

“She was in her eighties and was very energetic. She visited Renji Hospital with great interest, especially when she saw the building built in 1932. She watched and looked and touched the ward of the building where her father Niu Huilin had worked. She spoke cordially with the medical staff and patients present, and took in Renji Hospital’s profound historical heritage and the modern functions added to the newly renovated ward area,” Yuan said. 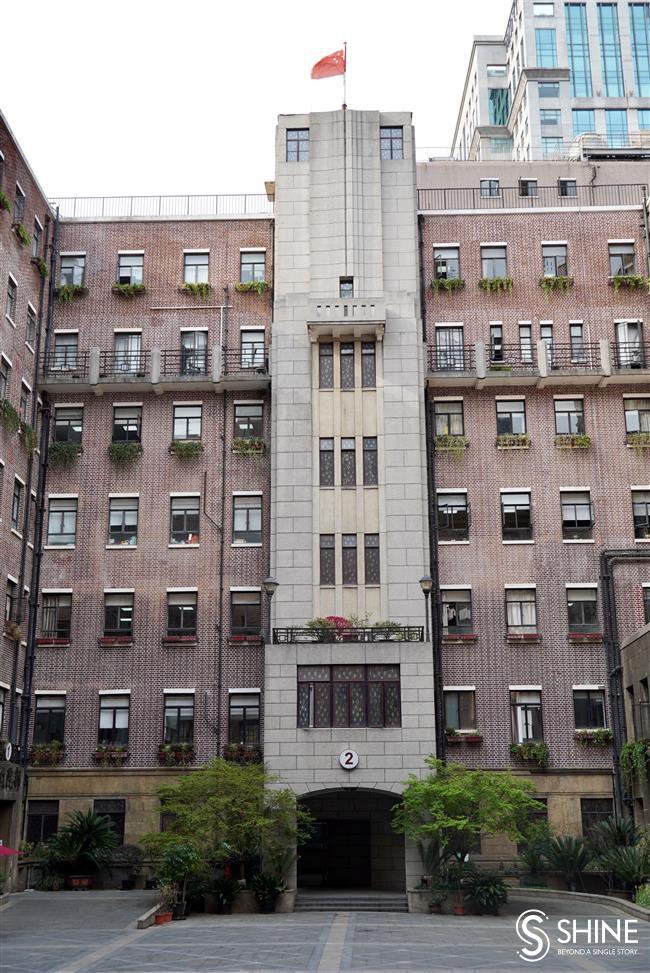 Niu Huilin had been head of the surgical department of the Lester Chinese Hospital, today’s Renji Hospital.

During the visit, Niu Enmei decided to donate several precious cultural relics to the hospital, such as gold-rimmed glasses, ashtrays, tea cups and an embroidered plaque by Niu’s patients to admire his superb medical skills.

She said most of the Niu descendants had embarked on a medical career and made contributions to the development of China’s medical and health care services.

The creamy-hued Linsheng Hospital on Yueyang Road is small and quiet, but its founding brothers provided a solid foundation of the city’s largest hospitals, previously introduced in this column, such as Renji Hospital, Huashan Hospital and Zhongshan Hospital. The medical brothers’ lives were short, but their achievements and spirits are everlasting.

The facade is graced by arched windows.

Yesterday: Linsheng Hospital
Today: a Chinese restaurant
Built in 1920
Address: 190 Yueyang Road
Tips: The facade can be admired from Yueyang Road. The second floor of an adjacent gallery/cafe offers a good view of the villa garden.