'Woman's Hospital,' a heritage left by pioneering duo of doctor and architect

Two of Shanghai's most distinguished figures joined hands in the early 20th century to construct a pioneering hospital dedicated to women. The idea of such a hospital was inspired by the death of one of their mothers. It is a fitting legacy to both men that the hospital still survives today.

Situated at 934 Yan'an Road W., the red-brick building was a collaboration between a Chinese doctor and a Chinese architect, both of whom were dedicated to bringing modernity to Shanghai in the 1930s. 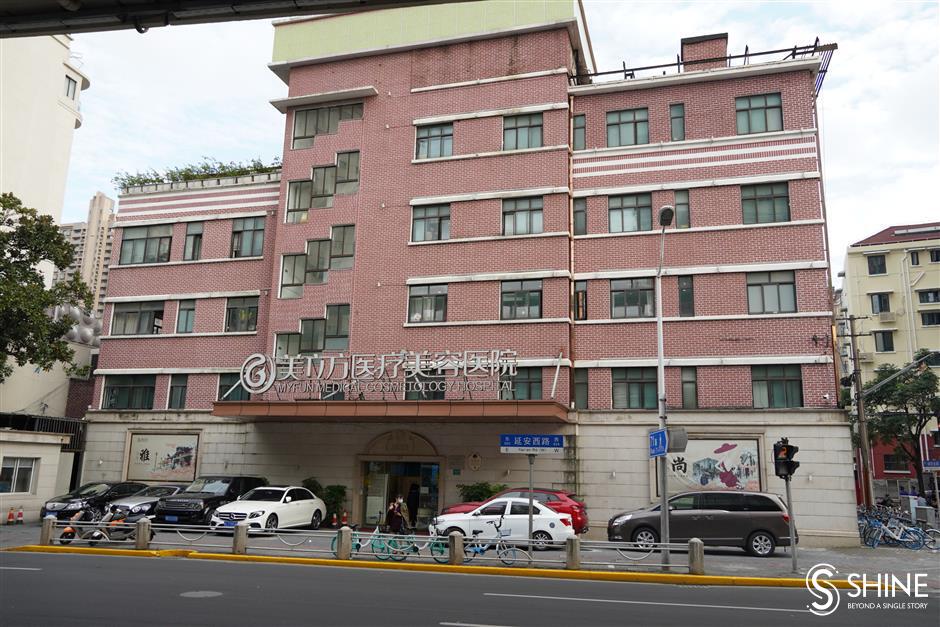 The red-brick building was a collaboration between a Chinese doctor and a Chinese architect. 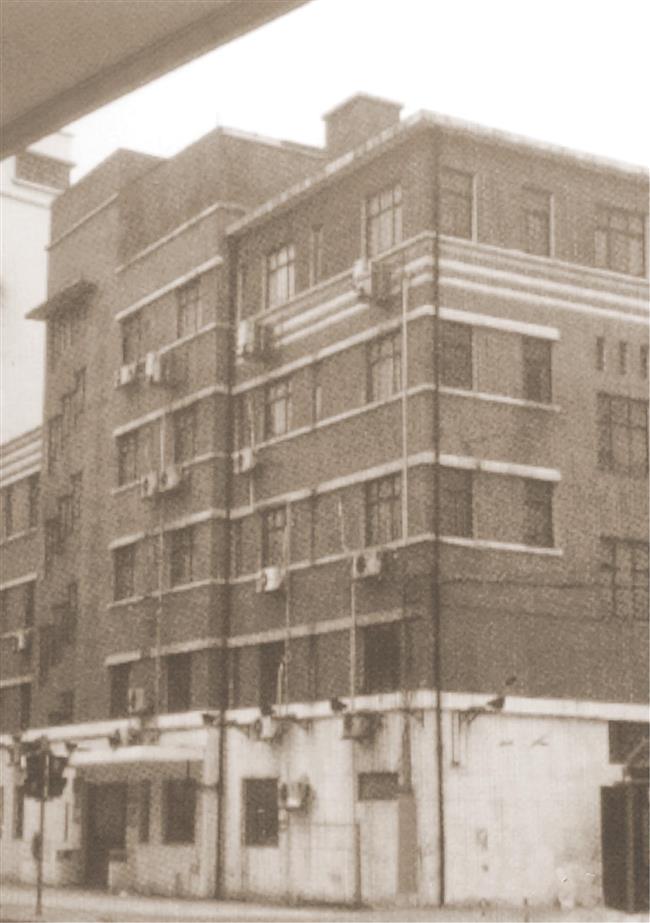 The “Woman’s Hospital,” designed by architect Zhuang Jun for Sun Keji, a gynecology and obstetrics doctor, established a medical center for the welfare of women.

“Our hospital has been caring for women and children since its founding year of 1935,” says Fang Wenli, director of the hospital, which was the first to conduct a water birth in Shanghai.

Hospital archives reveal it was founded as the “Woman’s Hospital” by Dr Sun Keji at 105 Great Western Road, today’s 934 Yan’an Road W. The hospital officially opened on January 17, 1935 and Dr Sun was its first director.

Born in Hunan Province in 1892, Dr Sun went to study gynecology and obstetrics in the John Hopkins University in the United States in 1922. He chose this major because his mother died while giving birth to him from childbirth.

Talented and hard-working, Sun became one of the favorite students of Dr John Whitridge Williams, famed founder of academic obstetrics in the United States. Williams wrote the first obstetric book, the Williams Obstetrics textbook. After graduation, Dr Sun could have remained and practised in the US but he decided to return to his motherland, a country which lacked doctors for women.

He taught at the Hsiang-Ya Medical College in Changsha of Hunan Province and Shanghai Medical College from 1926. He also headed the gynecology and obstetrics department of the Chinese Red Cross General Hospital, which is Huashan Hospital today.

In 1935, he obtained a site on the Great Western Road and commissioned Zhuang Jun to design a new private hospital for women.

Zhuang Jun and Dr Sun’s experiences mirrored each other, only in different fields.

Born in 1888, Zhuang went to study architecture at Illinois and Columbia universities in the US and established his own design studio in Shanghai in 1925. Among the Chinese architects active in old Shanghai, Zhuang was the first to study overseas and the first to return home to practice architectural design in China.

In 1928 he founded the Society of Chinese architects to unite Chinese designers in a competitive market with foreign architects.

According to a study of Tongji University vice president Wu Jiang, Zhuang initially preferred a Western classical style, such as his noteworthy work, the Kincheng Bank (today’s Bank of Communications at 200 Jiangxi Road M.). His skills allowed him to compete with first-class Western architects of the same period. But his later work, the Continental Emporium on Nanjing Road, marked a change of style, on which Zhuang thoroughly abandoned classical decoration, adapted Art Deco patterns and opted for a simple-cut appearance.

Covering an area of 3,128 square meters, the new hospital was a steel-and-concrete structure of six stories. The red-brick facade is divided by white horizontal lines. The building is adorned by steel gates and windows. The ground floor, the corridor and the staircases were paved with colorful mosaic tiles. The rooms were decorated with dados made of ceramic tiles.

In the new edition of “The Evolution of Shanghai Architecture in Modern Times,” Tongji University professor Zheng Shiling noted that the layout of the hospital is completely based on the emphasis of functions. 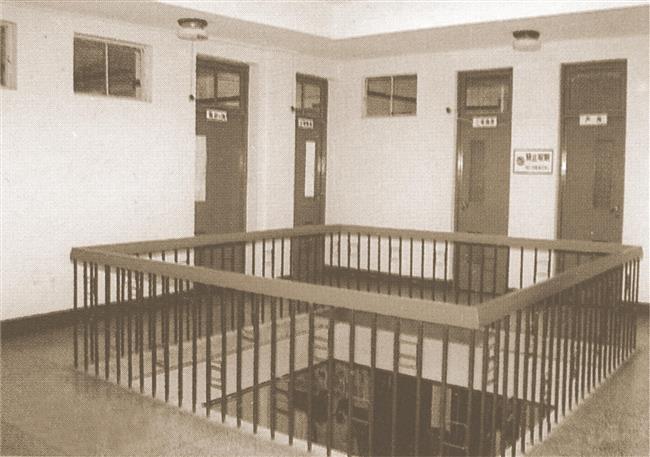 A file photo of the interior of the hospital 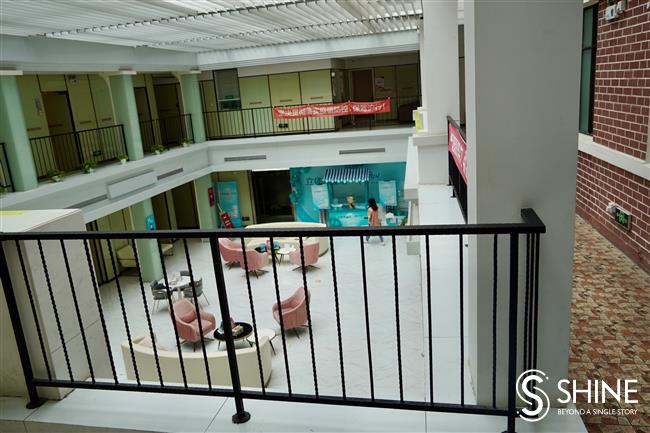 A recent photo of the interior of the hospital

The central lobby on the ground floor is flanked by outpatient clinics, clinical lab and dispensary on one side and auxiliary rooms such as the kitchen, dining room, laundry, and boiler on the other side. The second and third floors are all wards. The fourth floor had wards as well as rooms for surgery, childbirth, disinfection and babies.

The outer wall of the ground floor is decorated with sesame stone while the upper floors are covered with Taishan bricks.

“The architectural form completely abandons decoration and presents a simple and practical international style. From the Kincheng Bank in 1928 to the Cishu Building (Continental Emporium) in 1932, to the Sun Keji Woman’s Hospital in 1935, it took only seven or eight years for Zhuang Jun to complete the transition from neoclassical to modern architecture,” Zheng’s review noted.

According to Cao’s research, Zhuang published an article to expound on modernist architectural design of “Chinese architects” in September 1935, the same year of the hospital’s opening.

“The outlook of the woman’s hospital has many of the simplest elements of modernism design. Inside, the partition walls of the corridors are built with hollow bricks and the floors of the wards are paved with rubber mats for good sound insulation. The architect’s treatment reminds of ‘form follows function,’ a principle of modern architecture,” Cao wrote in his article named “On the Design Aesthetics Concept of Zhuangjun Architects.”

“Both the ‘Woman’s Hospital’ by Zhuang Jun and the Hongqiao Sanatorium by Xi Fuquan are fruits of modernism design arriving in China. These public buildings are not only echoes of Western modernist design in China, but also add a fresh touch of economic, functional, hygienic and simple-cut to Shanghai buildings,” Cao reviewed. 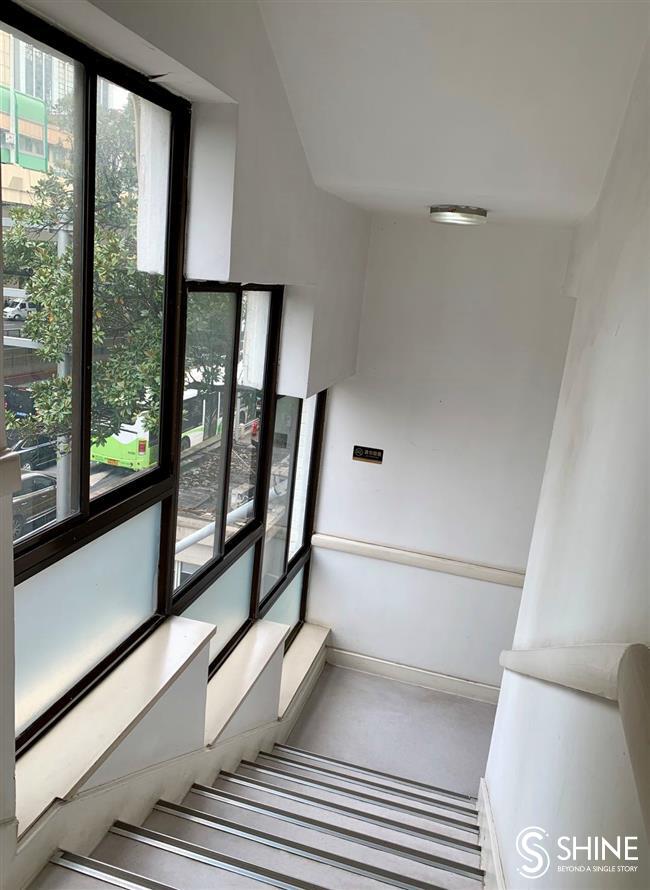 The architect’s treatment reminds of "form follows function," a principle of modern architecture.

In addition to modern design, the hospital was well equipped with state-of-the-art medical equipment, some of which were purchased in the US by Dr Sun.

The hospital started with only 11 beds and 20 medical workers, including 11 nurses, while Dr Sun was the only doctor.

Hospital archives reveal that Dr Sun made a set of strict regulations to manage the hospital. He was also reputed for his exquisite medical skills. His surgery was so refined and scientific that he reduced damages to minimum. He was renowned for operating without fever, blood transfusion and antibiotics.

The red-brick hospital was busy and well received from the beginning.

According to the North-China Herald on February 6, 1935, a daughter of Mr and Mrs G. V. Ball was born in the Woman’s Hospital on Great Western Road on January 29, 1935, only more than a week after the official founding.

Among the hospital’s famous patients were Zhang Qian, wife of Chen Yi, Shanghai’s first mayor after 1949 and the wife of T. V. Soong, minister of finance of the Kuomintang government. During a special visit to the red-brick building in 2014, famous American botanist Peter Ravan said he was delivered by Dr Sun in 1936 in this hospital. 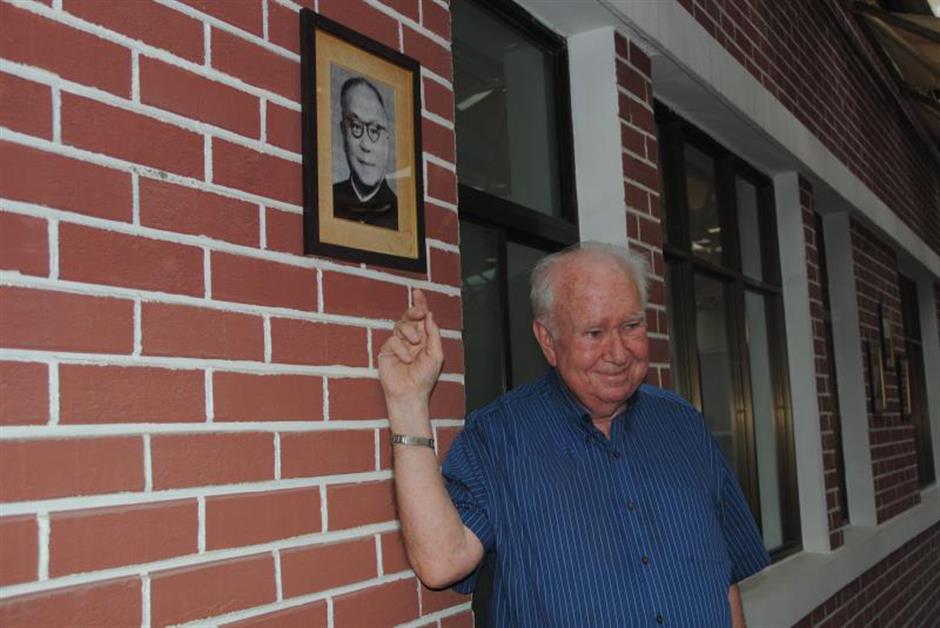 American botanist Peter Ravan points to the picture of architect Zhuang Jun during a visit in 2014.

“He required medical staff to wear a suit and ties inside a doctor’s white overall. Our hospital inherited this tradition and designated Monday as our ‘dressing day’ for wearing ties and scarves,” said Ai Min, director of administrative office of the hospital.

After founding the private hospital, Dr Sun continued to study medicine tirelessly. In 1947, he went to the US, Sweden, Denmark and France to give lectures and inspected other hospitals and studied gynecological tumor radium therapy at a Swedish Cancer Hospital.

And he brought home a large number of medical equipment, radium ingots, reagents and serum. He promoted pap staining in China to screen for cervical cancer and used serum to diagnose hemolysis of newborns with inconsistent mother and child RH Blood System types.

After 1949, Dr Sun became an obstetrics and gynecology consultant of the Shanghai Municipal Health Bureau. In 1956, he renovated the red-brick hospital and dedicated it to the government. Dr Sun still served as director of the new public hospital where he enjoyed a reputation for his high rigorous academic style and superb medical skills. He had unique insight into the diagnosis of infertility and the pathological development of cervical cancer. He also trained a number of physicians and laid the foundation for the development of obstetrics and gynecology.

A news report in Jiefang Daily on September 22, 1985, revealed more than 200 architects gathered to celebrate Zhuang’s 70 years’ career in architectural design and education. He was given a stamp engraved with “architectural maestro” by the Architectural Society of Shanghai. Zhuang was also famous for his longevity, and he managed to live to a grand old age of 102.

Compared with the architectural maestro, Dr Sun was less fortunate. He died in 1968 during the “cultural revolution” (1966-76) but his medical legacy lives on.

After several mergers and name changes, the “Woman’s Hospital” got its present name C. N. Maternity & Infant Health Hospital in 1993 and operated in the red-brick building until 2002. Today it’s one of Shanghai’s leading maternity hospitals.

“Our hospital was the first to conduct a water birth in Shanghai to alleviate birth pains and now we have more than 10,000 successful cases,” said director Fang.

In 2002, the hospital moved from the red-brick building on Yan’an Road to Wuyi Road. Today the building is used by the Myfun Medical Cosmetology Hospital.

During the expansion and renovation of the Wuyi Road compound, the C. N. Maternity & Infant Health Hospital temporarily operated in a smaller place on Yuyuan Road.

But every time the hospital moved it took the statue of Dr Sun Keji with it, attired in a suit and a tie. 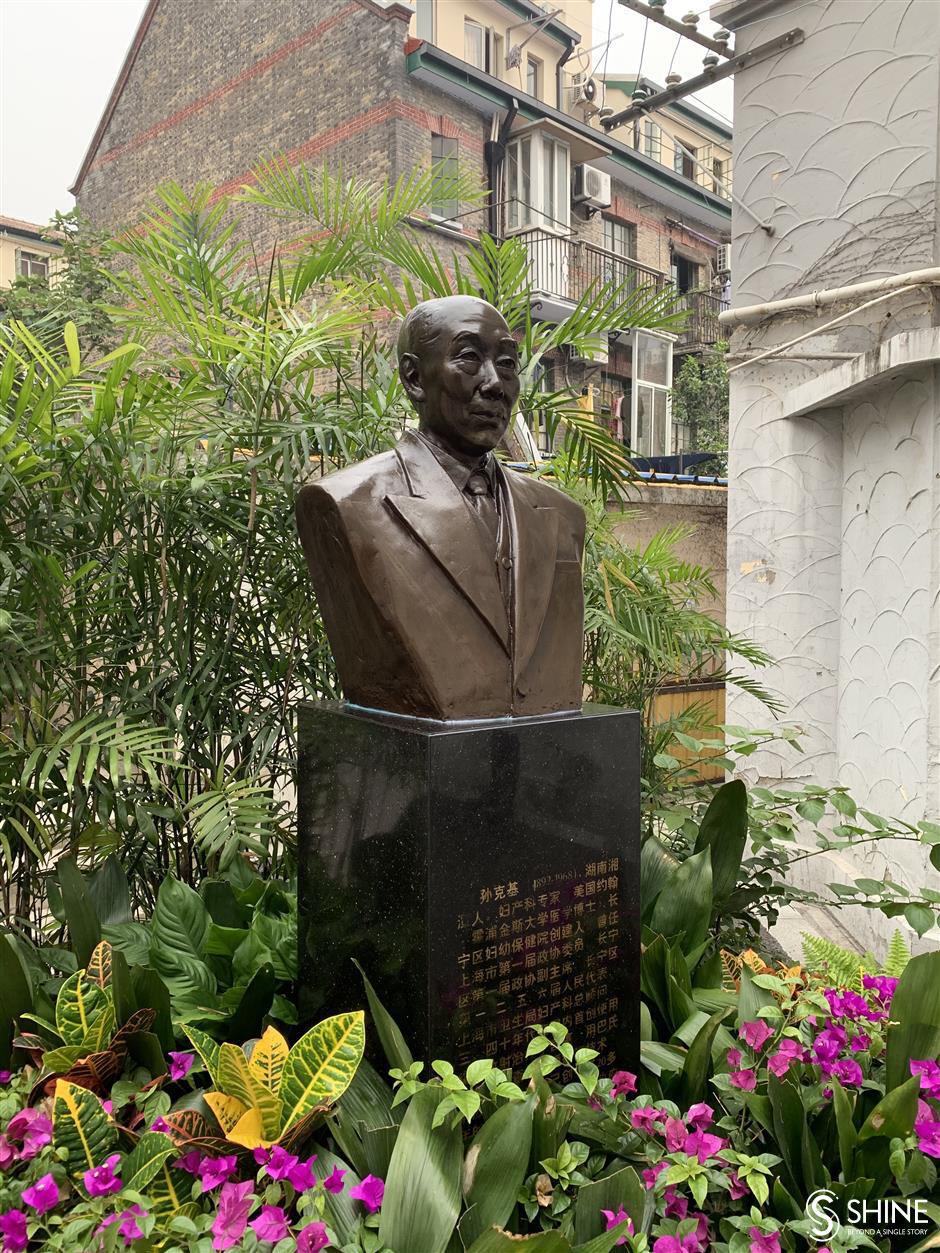 The statue of Dr Sun Keji