Entitled “Tang Gong Yan Ye,” or in English “Night Banquet in Tang Palace,” the dance was highly acclaimed for its inventive choreography and lively portrayal of court ladies from ancient times.

Since its release on the eve of Chinese New Year (February 11), the six-minute video clip has been viewed more than 4.71 million times on Sina Weibo, China’s equivalent of Twitter.

The performance was so well received that the Zhengzhou Song and Dance Theater dancers gave an encore 15 days later, on Henan TV’s Lantern Festival Gala.

Chinese Foreign Ministry spokesperson Hua Chunying was so impressed that she said on social media that it brought ancient pottery figurines back to life — “just like a travel back in time.”

Chen Lin, one of the leading choreographers, said she was inspired to produce the show by the three-colored glazed pottery figurines of Tang Dynasty court dancers on display in museums in Zhengzhou, Henan Province.

A Hebei Museum relief piece vividly captures the scene of performing female musicians, which dates back to the Five Dynasties (AD 907-960).

Measuring 136cm by 82cm on a white marble base, the “Color-painted Relief Scene of Musicians Playing” features a troupe of 12 musical players, along with a troupe leader and two dancers.

All troupe members are in plump figures, a stamp left by the previous Tang Dynasty, which embraced a craze for fuller figures.

Wearing men’s clothes, the female troupe leader stands at the front, with a ribboned baton in hand. By her feet are two small dancers, guiding the troupe that is performing.

In floor-length skirts, and with delicate fixed updo hairstyles, the musical players line up in two rows, facing right, each holding a musical instrument.

The lady in the center front, playing a pipa with a curved neck, seems to be the leading performer, since she has a much more sophisticated hairstyle, decorated with a flower. 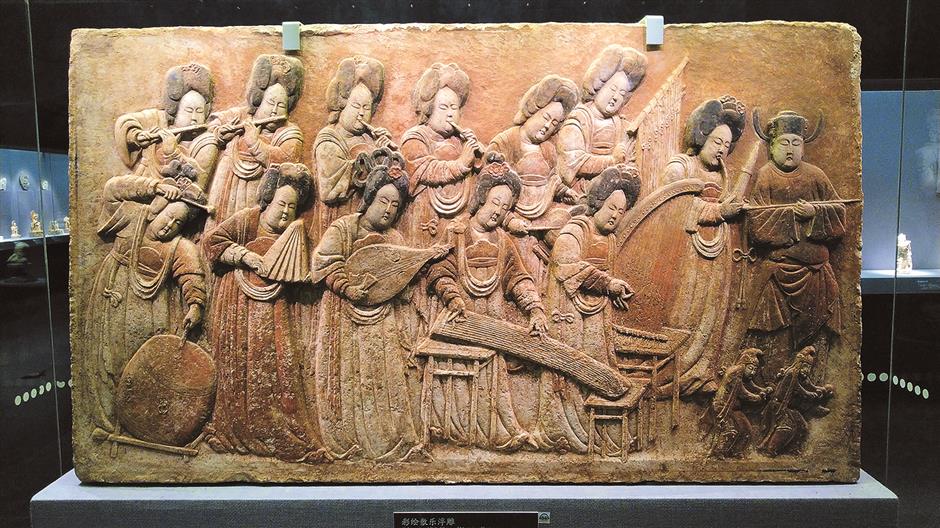 Derived in Northern and Southern dynasties (AD 420-581), sanyue prevails in the Sui Dynasty (AD 581-618) and Tang Dynasty, because they are more cheerful and light-hearted, compared to court music and dance. Therefore, the royals often invited sanyue troupes to perform on occasions of festivity and celebration.

There are also ancient instruments that no longer exist today, like the konghou. Played by the lady first right in front of the relief piece, a konghou was a kind of vertical plucked stringed instrument that looked a bit like harp.

In a crescent shape and usually decorated with the carving of a phoenix head, konghou gradually became a lost art after the late 14th century.

In 1994, the relief piece was found in a tomb excavated in Quyang County, Hebei Province. The tomb belongs to Wang Chuzhi, a military official who was fond of folk music and opera.

Records show there were 18 painted white-marble relief artworks in the tomb, though many of them were stolen along with a number of funerary objects.

In 2001, a color-painted warrior relief work was repatriated from the US. Along with its paring piece donated by a US art collector, the pieces are now kept in National Museum of China in Beijing.