Shanghai's Red Dawn at the birth of a revolution

The exhibition “Red Dawn — Shanghai,” which celebrates the 100th anniversary of the Communist Party of China, is under way at the city’s Maoma Warehouse, the former wool and linen warehouse at the Huangpu River waterfront in Yangpu District.

The exhibition is a joint effort of Shanghai Federation of Literary and Art Circles, Party History Research Center of the city and the district government of Yangpu.

Through June 1, a total of 388 works by 252 artists will be on display — from painting to calligraphy, from photography to folk art and art installation. 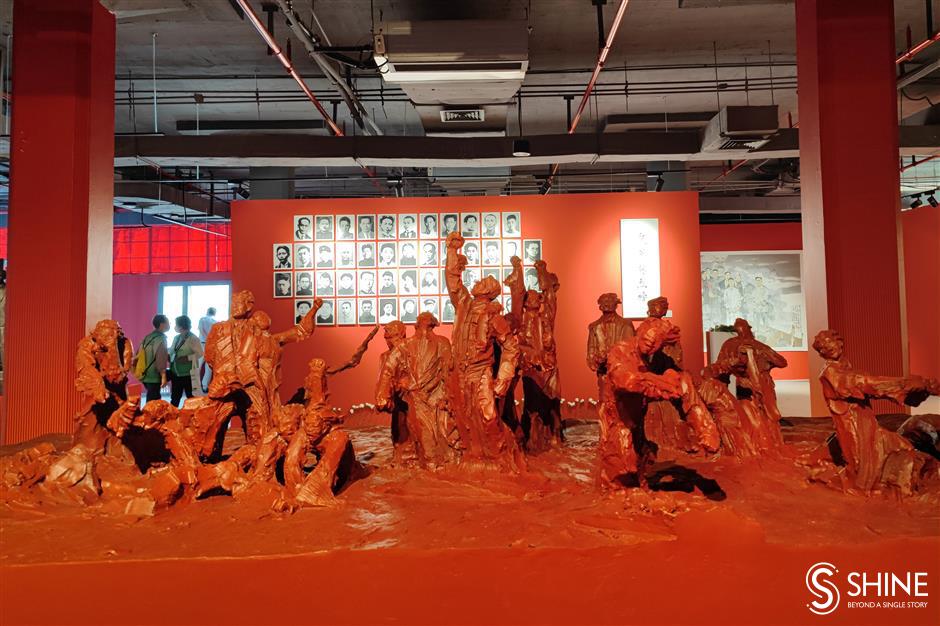 The exhibition focuses on the events of Shanghai during the period of 1921-49. It chronicles the founding and development of the Communist Party of China — celebrating its centenary in July — and stories of many famous figures.

In addition to photos and cultural artifacts, all items on display are original and specially commissioned for the exhibition.

A highlight of the exhibition is a giant Chinese painting “Exploration.” With a height of 2 meters and a length of 10 meters, the painting was created by nine young artists of Shanghai to portray young Chinese intellectuals’ long journey to France for further study around the year of 1920.

According to He Lanshan, one of the artists, it took them a month to create the painting that is based on old photos. From March of 1919 to December of 1920, about 1,600 Chinese students boarded a ship from Shanghai’s Huangpu River to France to study.

Artist Li Shoubai presents a giant papercut “A Journey of 100 Years” after four months of endeavors.

The papercut features revolutionary sites and bases relating to the key moments in the history of the Party, including the Site of the First National Congress of the CPC, Jinggang Mountain, and Ruijin, Zunyi and Yan’an cities.

It depicts the Party’s journey to liberate the Chinese people and lead them to prosperity.

The late Chinese leader Mao Zedong’s famous verse in mourning for his wife Yang Kaihui (1901-30) and his friend Liu Zhixun (1898-1932) is newly interpreted through pingtan (storytelling and ballad singing in the Suzhou dialect) via a video and modern technologies.

Artist Jiang Tieli created a sculpture about workers’ movements in Shanghai during the early 20th century, which influenced a large number of people nationwide.

Artist Su Zonghui presents a Chinese painting about the birth of “La Jeunesse,” or the New Youth magazine.

The music score of “March of the Volunteers,” the national anthem of the People’s Republic of China, has also inspired an art installation that combines lighting, sound with sculpture.

Stories about the members of the League of Left-Wing Writers are told through calligraphy, photos and paintings.

The exhibition also presents artworks in memory of the revolutionary martyrs who fought in the war of liberation.

Among these artworks are a giant sculpture created by Li Qianyu and young artist Hu Qifeng’s calligraphy work about martyr Zhang Kaifan’s poem written in prison.

During the exhibition, music, film and theater performances will be offered to provide visitors with an insight into the glorious history and achievements of the Party. Visitors can also attend workshops of handmade artworks.