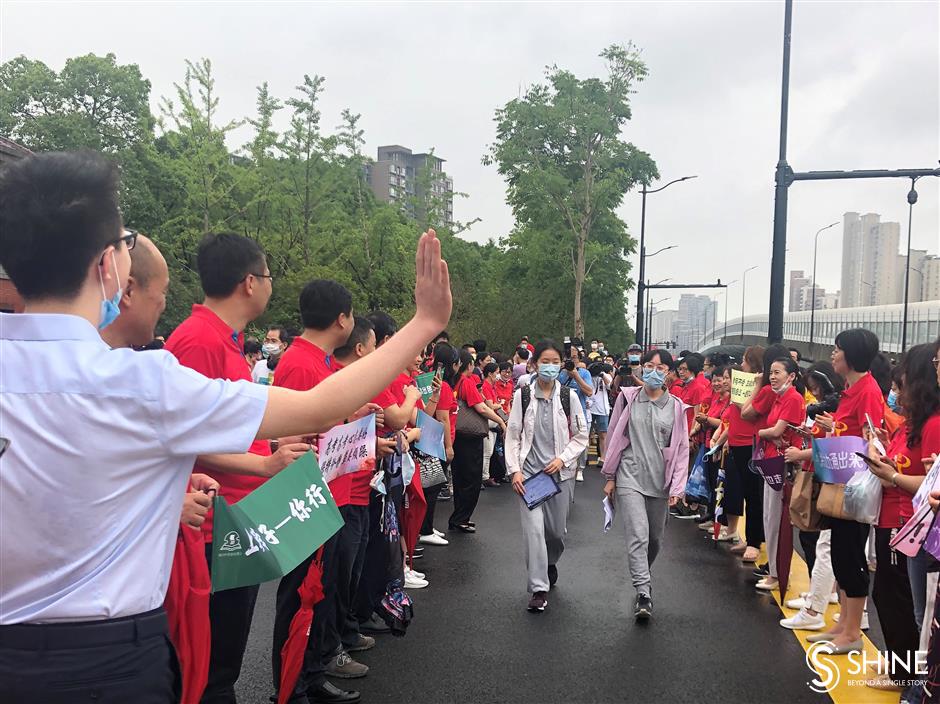 Teachers encourage their students in front of an exam site at Shanghai Jincai High School. 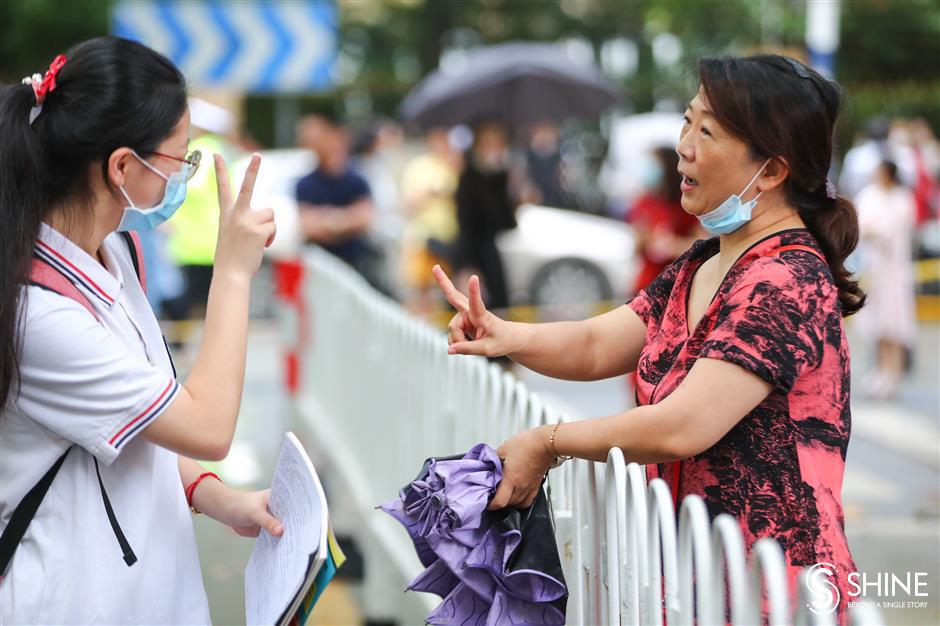 A teacher sees off her student in front of an exam site at Xinzhuang High School. 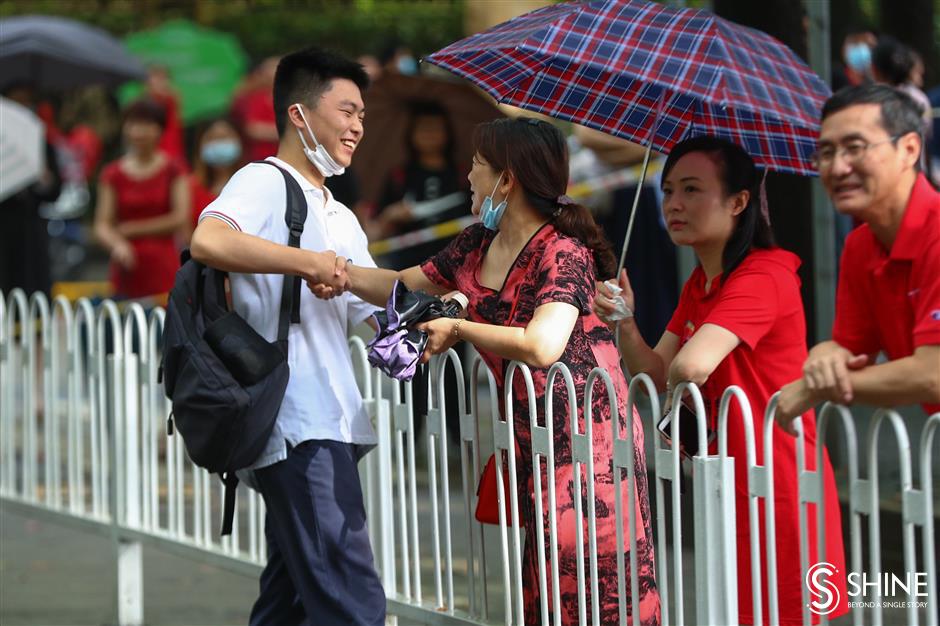 A teacher shakes hands with her student in front of an exam site at Xinzhuang High School.

About 50,000 students in Shanghai sat for the gaokao, China's national college entrance exam, on Tuesday at 104 schools around the city. Luckily, the exams weren't dampened by downpours which caused flooding and heavy traffic in Shanghai on Monday.

This is the first time Chinese students have sat the exam in July since 2003. The exam is usually scheduled for June, but the change was made due to the COVID-19 pandemic which kept students at home to take online classes for more than two months.

Also due to the pandemic, every student has to show an ID card and an exam attendance ticket, as well as a health declaration letter. They need to have their temperatures checked too before entering exam sites.

Students must wear masks when entering exam locations, but can take them off during the test.

To handle emergencies such as students developing fever, every exam site has prepared extra classrooms to let feverish students take their tests separately. Each district has a school on standby in case any original exam site has to be closed.

The first part of the exam, a written Chinese test, started at 9am. Students were advised to arrive at test sites 45 minutes earlier to go through temperature and ID checks before entering the testing rooms. 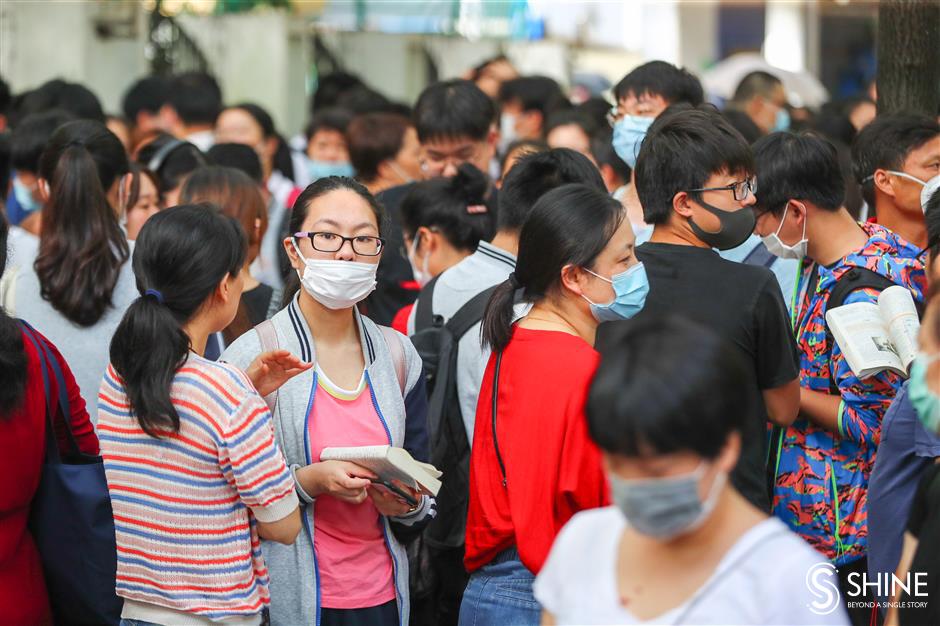 Students and parents wait in front of Xinzhuang High School. 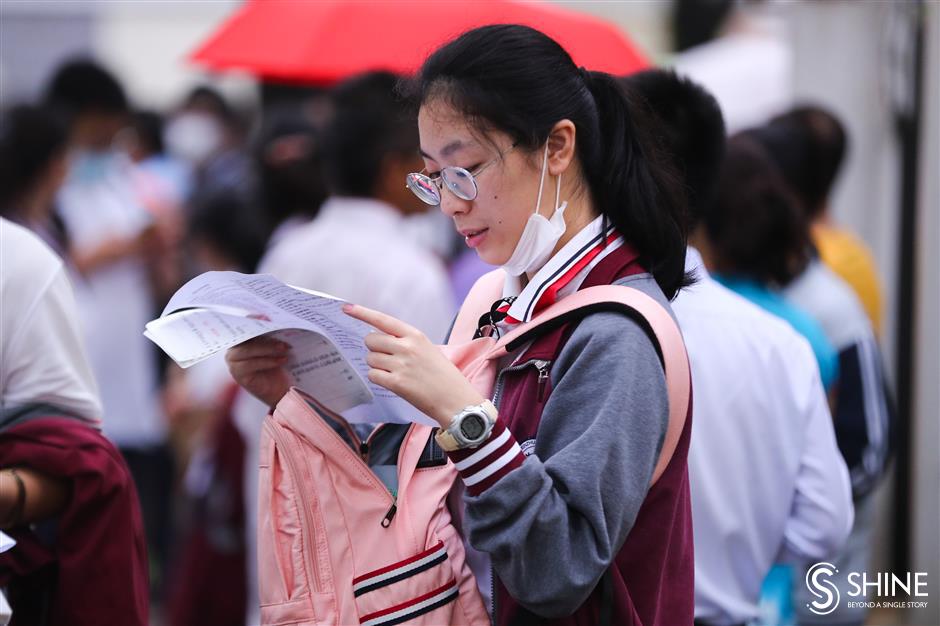 A student has a final glance at her review material before entering an exam site.

At Xinzhuang High School in Minhang District, parents and students arrived before 7:30am. Some students gathered together in front of the school and reviewed knowledge points that might appear on the test.

“I’m not nervous at all. I’ve had so many tests and this is just another one,” said Yang Jieyu, a student at the Middle School Affiliated to Shanghai Minhang Institute of Education.

“I just follow my daily routines. I went to bed at 11pm last night and got up at 6:15 this morning,” she said. “My parents dropped me here and left immediately. I told them not to wait outside the school throughout the test. It’s useless.” 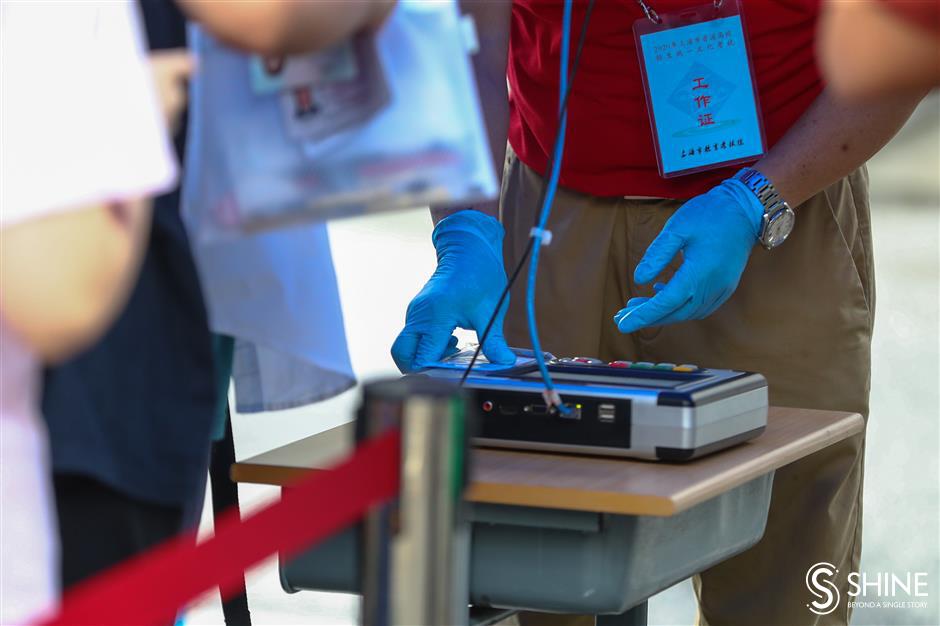 Students have their ID cards scanned at an exam site at Xinzhuang High School. 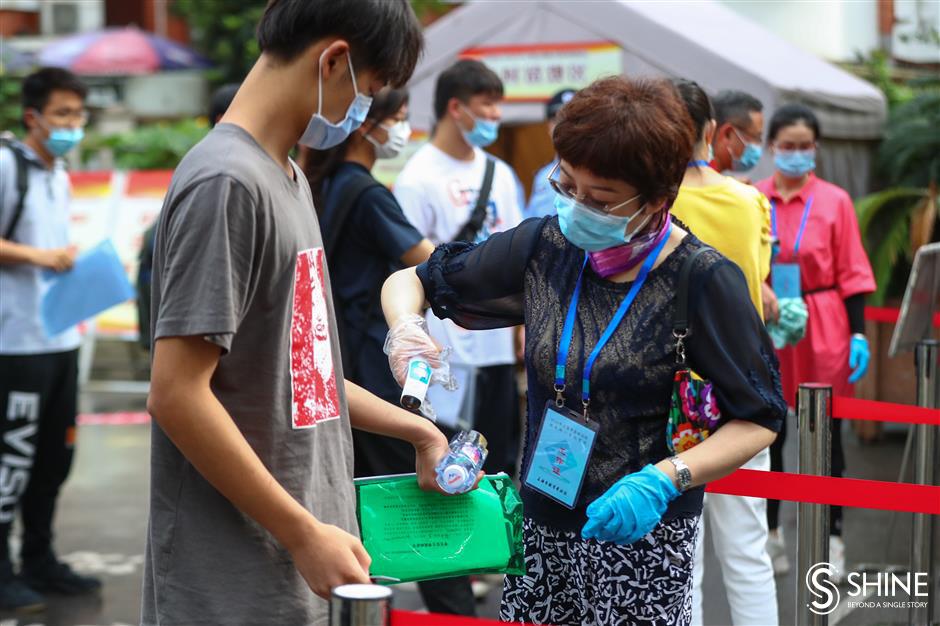 Students have their temperatures checked.

A mother surnamed Lu and her husband remained near the school after dropping off their son.

“He is obviously nervous,” she said. “He refused to talk with us in the morning and we dared not speak either. I think I’m more nervous than him.”

Li Jue and her husband also drove their son to the school early.

“We left home before 7am, as I was worried it would become rainy and cause heavy traffic congestion,” Li said. “We arrived early so my son had a final review in the car for about half an hour. He entered the school around 8am.”

Li said the family had rented an apartment near the school after her son was admitted into Xinzhuang High School three years ago, while their home is in Xuhui District.

“The lease contract expired in June as the exam would have finished last month if the pandemic had not happened,” she said.

Both she and her husband requested leave from work for three days to accompany their son during the exam days. 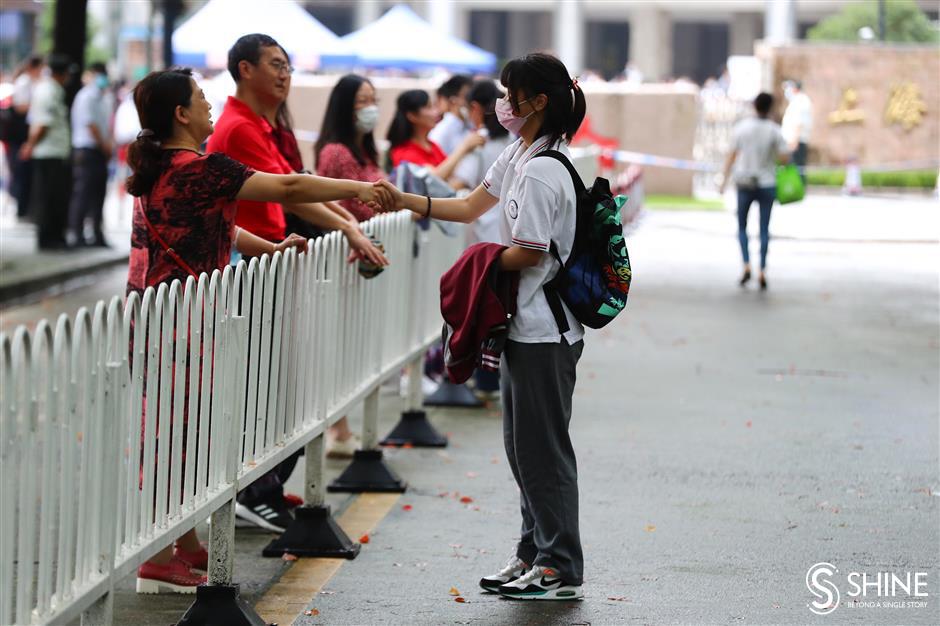 A teacher sees off her student at Xinzhuang High School.

“We are not that nervous because the school has been arranging study schedules well,” she said. “They started online classes in February and resumed campus classes in late April. Of course, online teaching may not be as effective, but it’s fair for everybody and they had an extra month for review.”

Li said she also searched online for things that are believed to bring good luck to test-takers.

Li explained that his son knocked a zongzi, glutinous rice dumpling, hung over his head in the morning for the propitious implication of being the first in the exam. He wore Nike shoes as the iconic logo looks likes a check to mark correct answers. Li and her husband wore auspicious clothing of their own: her a qipao and him a blue T-shirt, both believed to bring good luck. She also told her son to kiss the test paper for good omens.

“Such things are auspicious and can also make us all relaxed,” said Li. 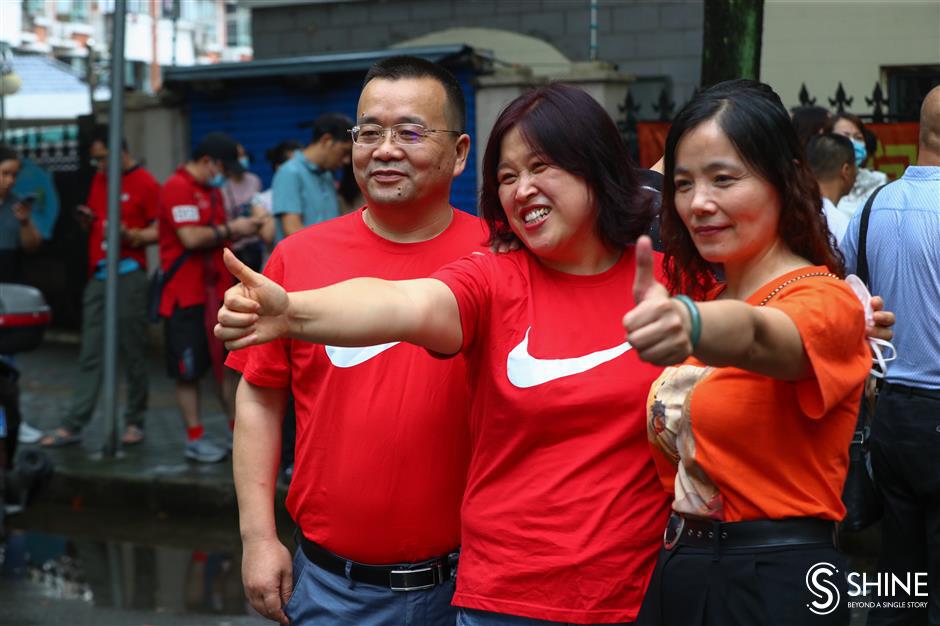 Parents wear clothes with auspicious symbols to send good wishes for their children.

At Shanghai Jincai High School, many students arrived with their parents before 8am.

Faculty of No.2 High School of East China Normal University unfolded a banner to cheer for their students.

Teachers from Shanghai Experimental School made two lines to await their students to pass and give them encouragement.

A mother in a qipao surnamed Tang watched as her daughter entered the gate.

“She was easily affected by the environment and was nervous when studying online at home during the outbreak of the novel coronavirus. However, I think the online study didn’t have too much negative impact, for that she is always conscientious in her studies,” she said.

The mother, whose daughter is a graduating student of No.2 High School of East China Normal University, said she hoped her child could relax and believe in herself. “We have already prepared everything needed, and she doesn’t have to be nervous,” she said. 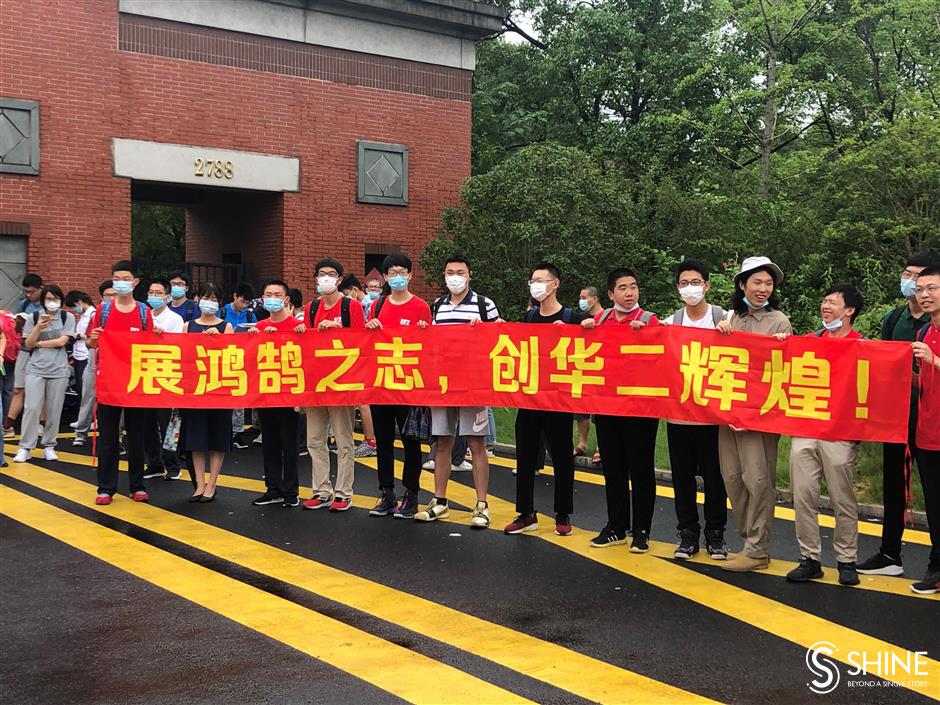 Students at No.2 High School of East China Normal University hold a banner to cheer their classmates.

A father surnamed Li, who has a son in Shanghai Experimental School, came with his wife to send off their boy.

“I'm usually less concerned with my son’s studies than his mother. But during the time he studied at home, I spent more time caring about him and found it requires a lot of energy. I suppose that studying at school is still more effective than online courses. When he returned to school, I could feel that he had more pressure, which is good for the final sprint. But when the exam comes, I hope he can relieve pressure and perform well,” he said. 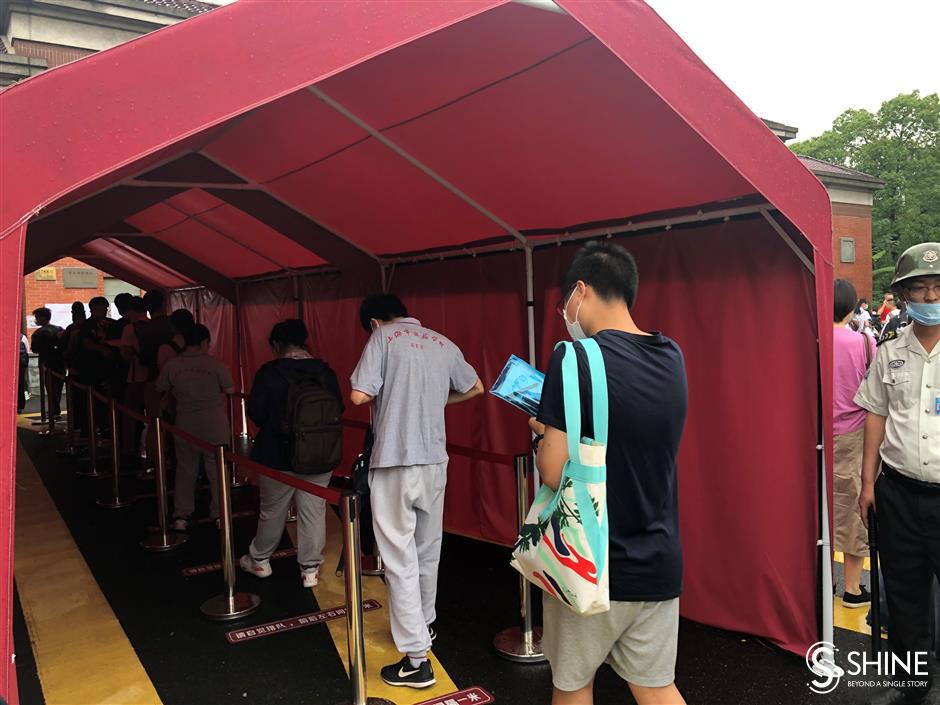 Every year, there are students who forget necessary items. This year is no exception.

At around 8:15am, Minhang police received a report that a student at an exam site had forgotten to bring along her ID card and exam attendance ticket. They were asked to help pick up the items from her home.

Shanghai police said over 6,000 officers and their assistants were deployed in all districts on Tuesday morning, focusing on schools where the exam was held to keep traffic moving and help students sit for the exam on time. 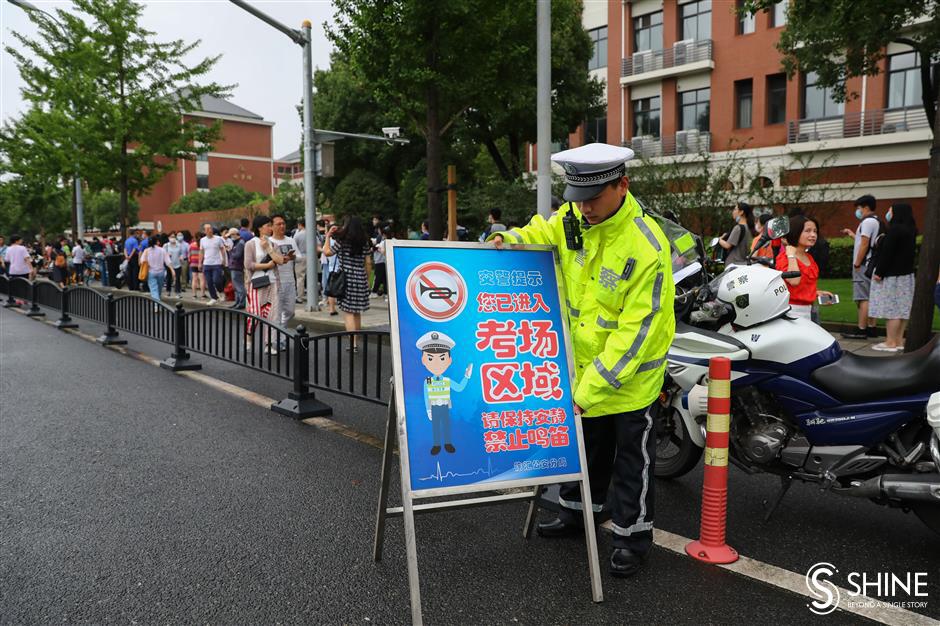 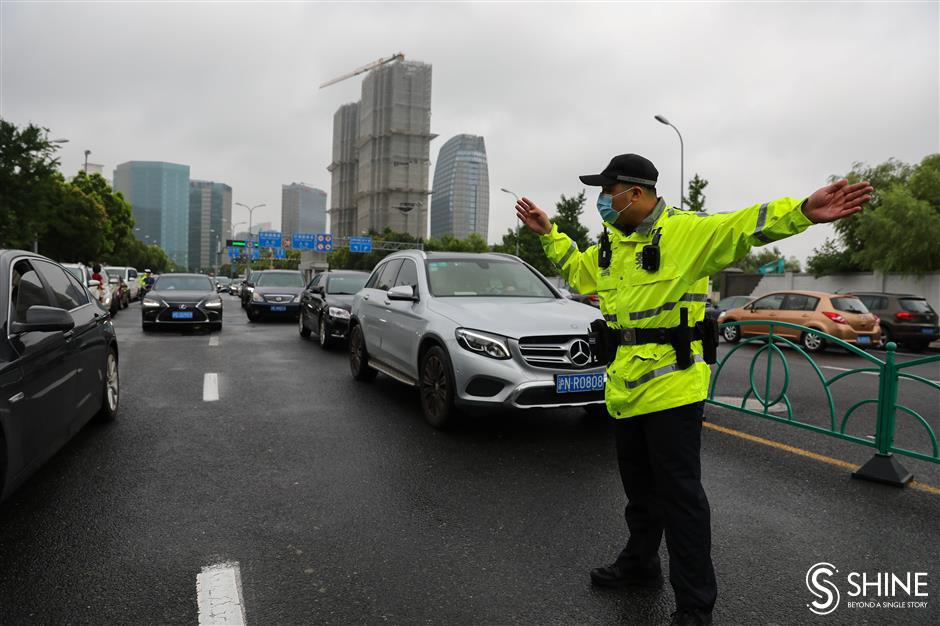 Traffic police officers on motorcycle stood by to transport students in case they were about to be late, with helmets prepared for them.

Police in Changning District helped a student who was to take the exam at Shanghai No.3 Girls’ High School on Jiangsu Road.

Jiao Jinjun, a traffic police officer who was patrolling at the intersection of Yan’an Road W. and Hongxu Road at 7:43am, was approached by a motorist who said that he's the parent of the test-taker and they were about to be late to arrive at that school.

Jiao then led the way through and they arrived at the school only 10 minutes later, instead of the estimated 50 minutes.

At some of the schools, police set up temporary parking spots for students who come for the exam in cars.

The traffic police said they will step up enforcement of traffic offenses from Tuesday to Thursday to streamline traffic in the city. Between 2:50pm and 3:20pm on Wednesday when the English listening test is to be held, the police will look out for motorists who illegally honk their horns. 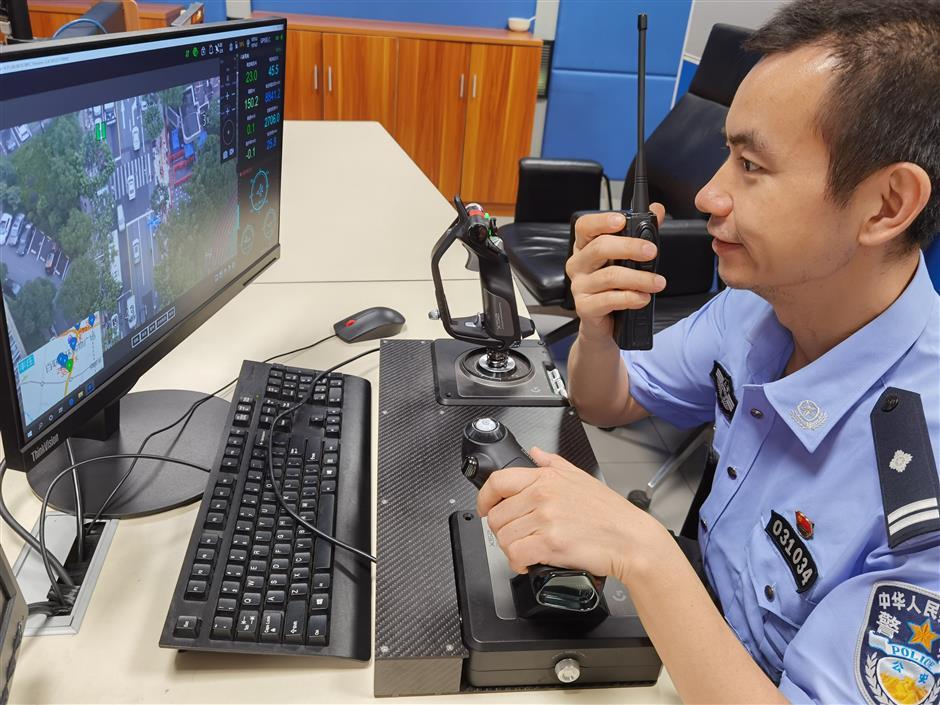 A police officer monitors Changzheng High School in Putuo District through pictures sent by a drone flying over the school on Tuesday morning.