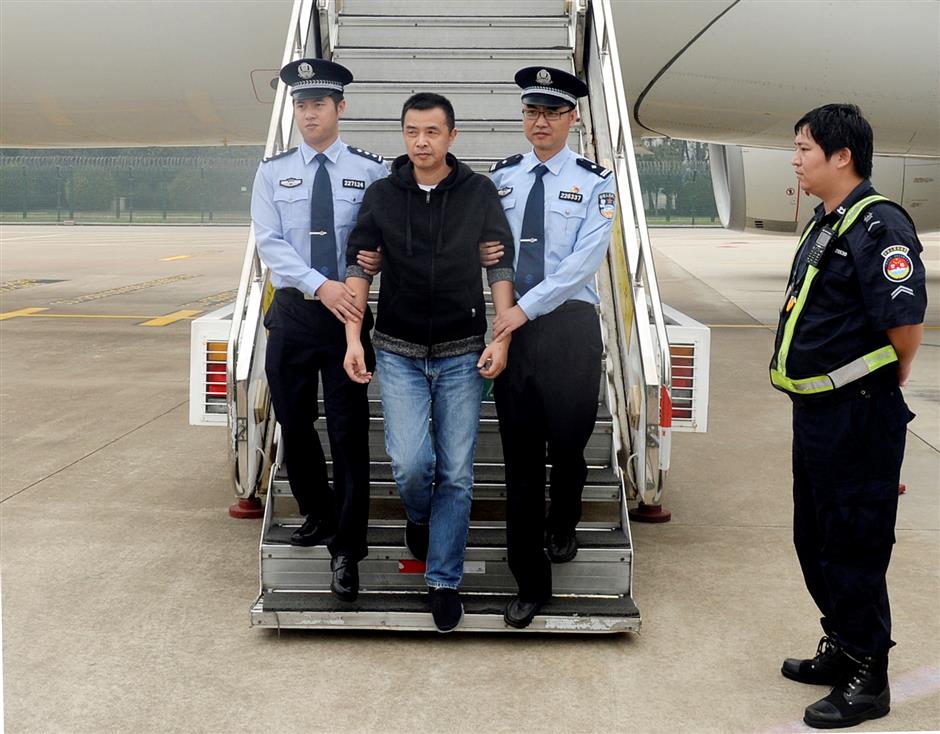 Xu Xuewei (center) is escorted by police officers when he came back to China on September 25 at Xiaoshan Airport in Hangzhou.

A SUSPECT who was on a list of China’s 100 most wanted fugitives has returned from the United States after giving himself up, the Party’s anti-graft watchdog said yesterday.

Xu Xuewei, who ran a technology company in east China’s Jiangsu Province, is said to have fled to the US in late 2012 after coming under suspicion of contract fraud, according to the Central Commission for Discipline Inspection.

Xu returned to China to give himself up “under the influence of policy and legal deterrence,” the commission said in a statement.

Xu’s return shows there are no safe havens abroad, the commission said. It urged other fugitives on the list to turn themselves in as soon as possible.

Separately, the commission played a short interview with another corruption suspect, Liu Changkai, the former head of a driving school in Beijing who turned himself in last month after being on the run in the US since 1999.

He had been wanted for fraud.

Against a background of downbeat music, Liu described his loneliness at having had to live life on the lam.

“Living overseas wasn’t too difficult, but it was very lonely. It was like being in jail,” Liu said.

As part of President Xi Jinping’s ongoing anti-corruption campaign, China has pursued an overseas search dubbed Operation Fox Hunt for corrupt officials and business executives who have fled abroad with their assets.

In April 2015, China published a list of 100 “most-wanted” suspects it believed to be hiding overseas, many of them choosing to live in the United States, Canada and Australia.

Xu is the 46th person on the list to have returned since the operation was launched, the commission said in a statement on its website.