Xi: Only socialism with Chinese characteristics can lead to national revival 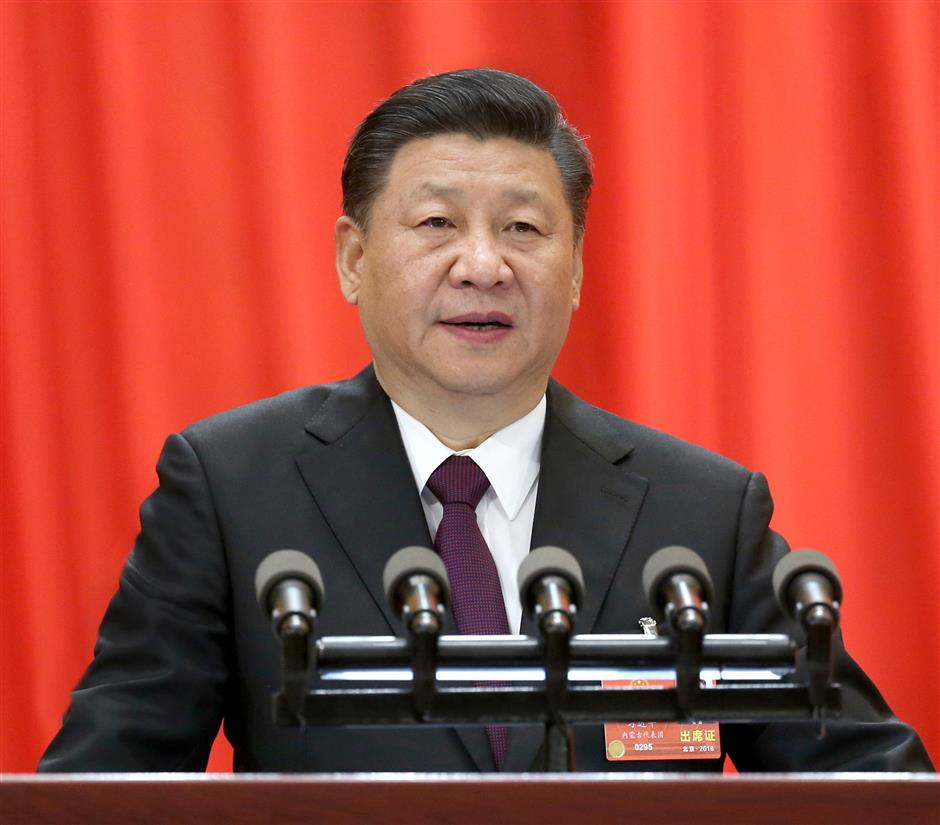 Chinese President Xi Jinping gives his keynote speech at the closing meeting of the first session of the 13th National People’s Congress at the Great Hall of the People in Beijing.

Only by adhering to and developing socialism with Chinese characteristics can the nation realize its great rejuvenation, President Xi Jinping said at the closing meeting of the annual legislative session yesterday.

“We have a favorable development environment that was unimaginable before, but we still face unprecedented difficulties and challenges,” Xi said when addressing nearly 3,000 deputies to the National People’s Congress.

At its 19th National Congress in October, the Communist Party of China drew up a blueprint for securing a decisive victory in building a moderately prosperous society in all respects, embarking on a new journey to fully build a modern socialist country and realizing the great rejuvenation of the Chinese nation, he said.

Comparing the process to materialize the blueprint to “another Long March,” Xi warned the nation against being satisfied with the status quo, indulging oneself in ease and comfort, or letting delight dispel worries.

He called on everyone to stay true to the original aspiration, hold on to the mission, and strive to accomplish it.

Xi vowed to continue to serve the people.

“It is a glorious mission and weighty responsibility to take on this great position of the President of the People’s Republic of China. I will, as always, faithfully fulfill my responsibilities empowered by the Constitution, be loyal to the motherland and the people, perform my duty scrupulously, do all my best, be diligent at work, and stay devoted and dedicated,” Xi said.

“I will continue to serve as a servant of the people, accept supervision by the people, and will absolutely not betray the great trust from all deputies and Chinese people of all ethnic groups.”

Xi asked all personnel of state organs to always put the people in the most prominent place in their hearts, always serve the people wholeheartedly, and always work hard for the people’s interests and happiness.

“No matter how high a position one holds, all personnel of state organs should keep firmly in mind that our republic is the People’s Republic of China,” he noted.

The president stressed the underlying principle of pursuing progress while ensuring stability, the people-centered development vision, the notion of “great struggle, great project, great cause and great dream,” and coordinated implementation of the five-sphere integrated plan and the four-pronged comprehensive strategy.

The Chinese are people with great creativity, Xi stressed, noting that he is confident that as long as the over 1.3 billion Chinese people keep on developing such great creativity, China will definitely create miracles one after another.

The Chinese are people with great spirit of struggle, he said, noting that he believes as long as they uphold that spirit, China will definitely fulfill the great goal of creating a better life.

“It is a country where all power of the state belongs to the people. We must base our efforts on the interests of the people, ensure the principal status of the people, humbly learn from the people, and heed their needs and draw on their wisdom,” he said.

Expressing his full confidence in China’s future, Xi urged everyone to adapt to the new historic juncture for the development of the country and act in response to the evolution of the principal contradiction in Chinese society.

The Chinese have always had the sense of justice and compassion and tied their destiny closely to that of the people around the world, he said.

“The Chinese people are always ready to do their utmost to contribute to the peace and development of humanity,” he said.