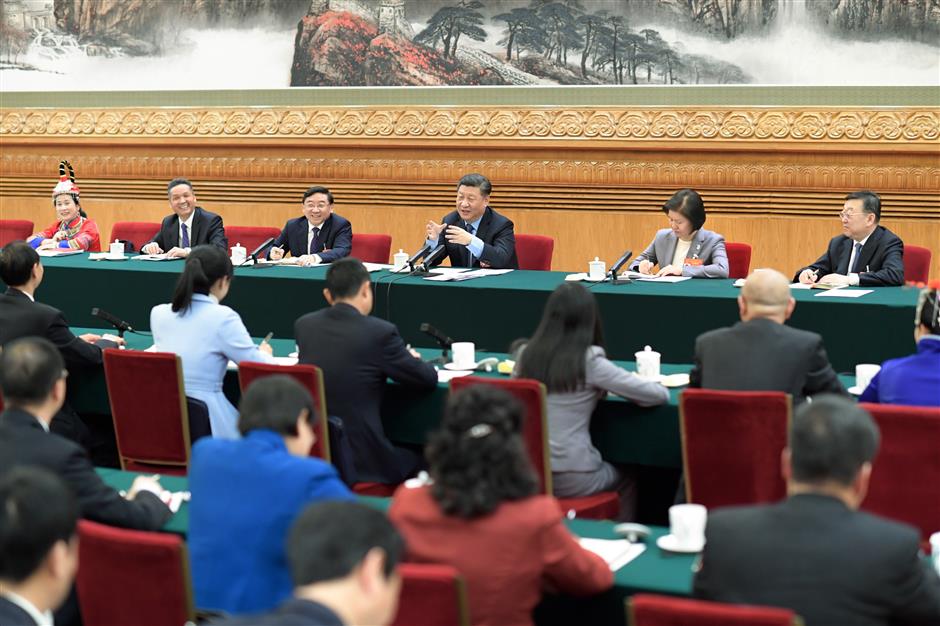 Chinese President Xi Jinping, also general secretary of the Communist Party of China Central Committee and chairman of the Central Military Commission, joins deliberation with deputies from Fujian Province at the second session of the 13th National People's Congress in Beijing, capital of China, March 10, 2019.

“We should create a favorable development environment for innovation, entrepreneurship and creativity,” said Xi.

China should seek momentum from reform and opening-up, unleash to the maximum the whole society’s power for innovation, entrepreneurship and creativity, and keep improving the country’s influence and competitiveness in a world that is undergoing profound changes, he said.

Xi stressed creating favorable conditions for the development of small and medium-sized enterprises and young people, and establishing an acceleration mechanism for high-tech companies. He urged solid implementation of the policies and measures to encourage, guide and support the development of the private sector.

He called for efforts to explore new ways for integrated development across the Taiwan Strait. The two sides of the Strait should enhance economic and trade cooperation, infrastructure connectivity, energy and resource exchanges, and shared industry standards, he said.

Cross-Strait cooperation and cultural exchanges should be strengthened, he added.

Xi stressed the importance of implementing the people-centered development concept in the work on Taiwan, urging efforts to benefit Taiwan compatriots in the same way as people on the Chinese mainland are served.

He encouraged listening to the voice of Taiwan compatriots and research on what other policies and measures can be introduced to bring them benefits.

Xi said this year marks the 70th anniversary of the founding of New China, and it is necessary to ensure that no one in the country’s old revolutionary base areas falls behind in the process of building a moderately prosperous society in all respects.

The president called for adherence to targeted poverty alleviation and efforts to identify the root causes of poverty to enhance the effectiveness of anti-poverty measures. More efforts should be put into coordinating economic development with ecological protection, he added.