Out of the mountains, out of poverty

Ranagul Karman and her family are settling into their new home in Kashgar in Xinjiang Uygur Autonomous Region in northwest China.

"With central heating, gas, running water, Internet and cable TV, we no longer need to worry about things that troubled us in the past," Karman says. 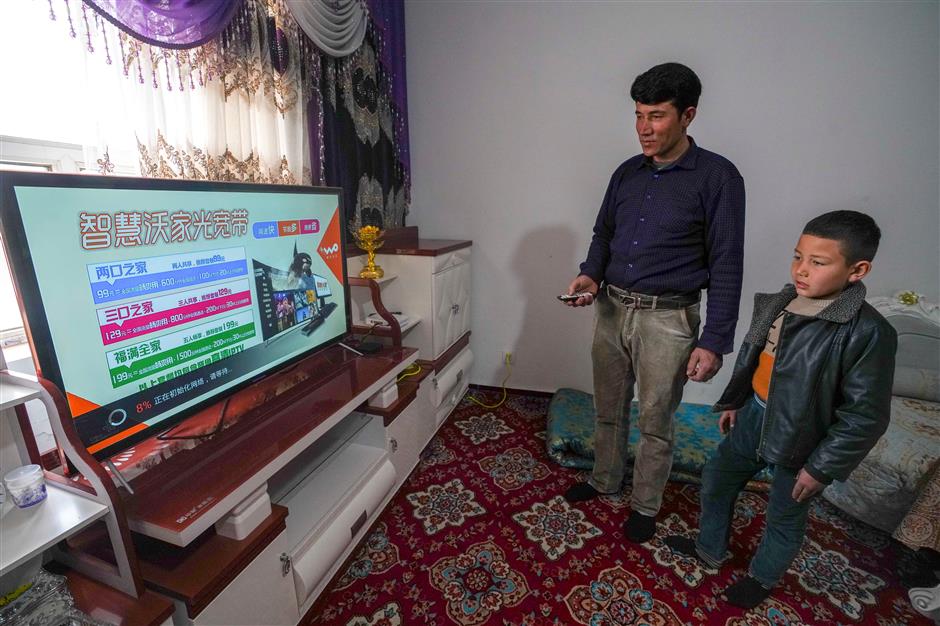 They have moved to a relocation village in Antong County, 94 kilometers away from their old neighborhood -- Kosrap County in Kizilsu Kirghiz Autonomous Prefecture.

This village, one of many relocation sites in Xinjiang, was built by the local government to shelter those who moved from poverty-stricken areas in the mountains, seeking a better life.

The new Karman family home has indoor plumbing, much more hygienic than the dry latrine the family used in Kosrap where flies buzzed everywhere and people had to take water from the river.

When it rained the roof would leak, and the house was generally dilapidated, but the thing that concerned Karman most was her children's education. In mountainous areas like Kosrap, schools struggle to recruit teachers, and the standard of education is low.

"The children were always cold at school, especially in winter," Karman says. "This new village is much more comfortable since there's floor heating both at home and in school." 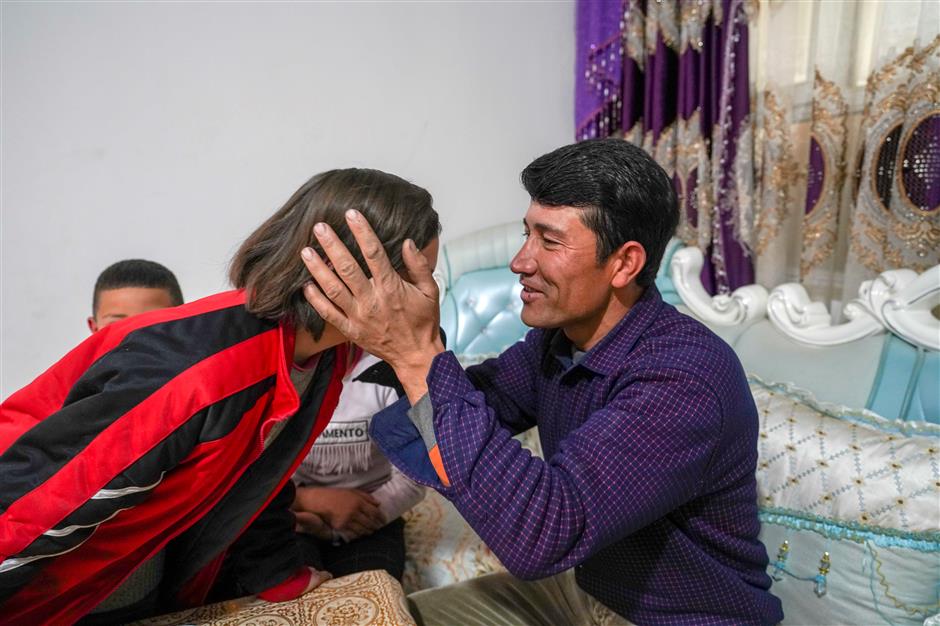 Mahrup Murapa (right) and his daughter (left) at their new home in the relocation village of Antong County.

One of Karman's daughters now studies at a boarding school in the town and comes home at the weekend. Her two younger children go to the primary school near their home.

"They all have dreams now, either to be a soldier or a doctor," Karman says. "I've never heard them say things like this before."

"Their horizons have become broader as they came into contact with more people, beyond the mountains."

It's not just the children who have shifted their perspectives. Karman and her husband Mahrup Murapa also have new jobs.

Ranagul Karman organizes goods at the store she runs.

Karman runs a store while Murapa works as a full-time plumber and part-time delivery driver. They have made more than 60,000 yuan (US$9,000) since they moved in August 2018.

They have used the money to furnish their home, filling it with household electrical appliances including a television, a water heater and a refrigerator. 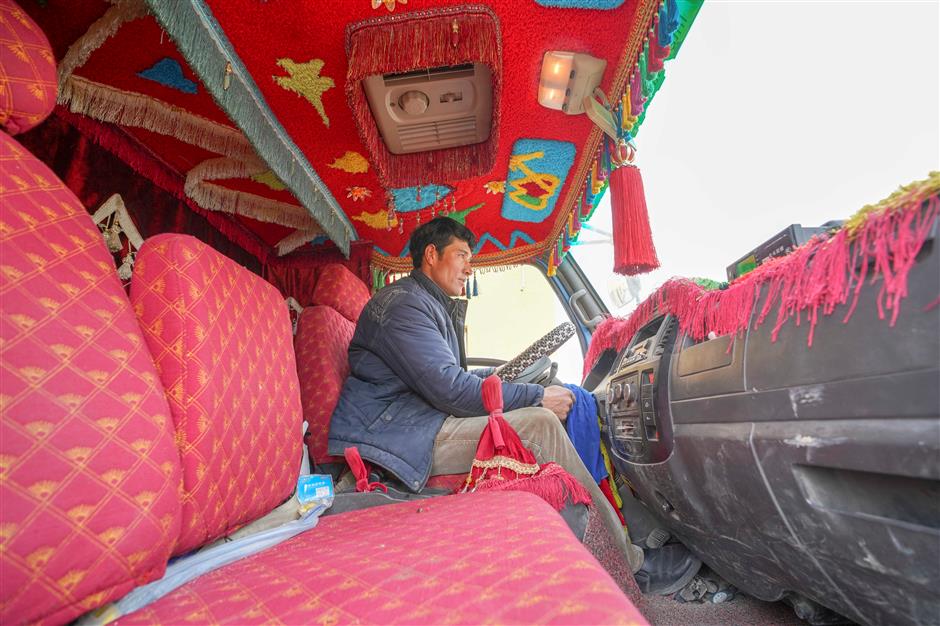 Mahrup Murapa drives his newly-bought truck, ready for a delivery. 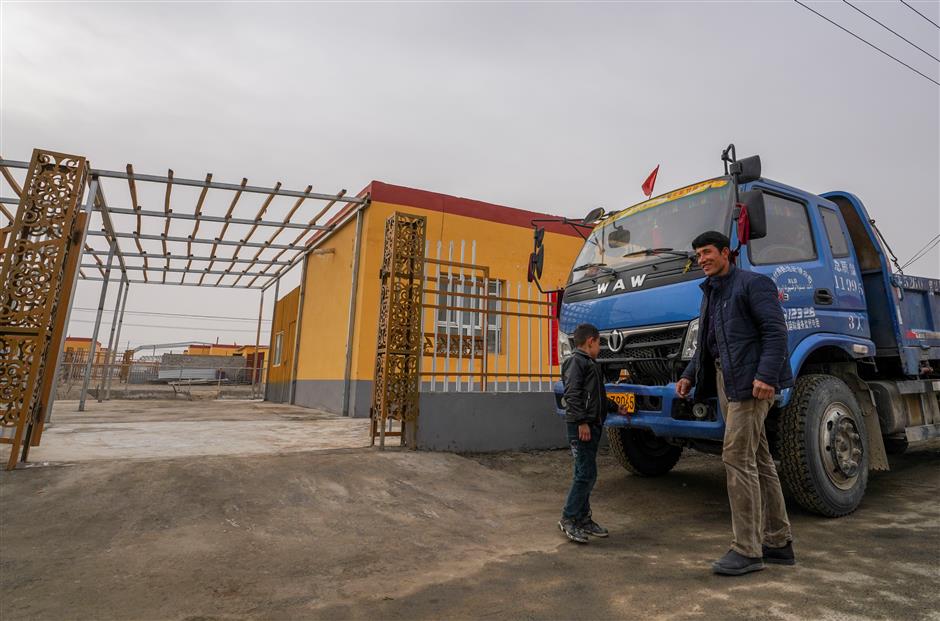 Karman and her family are not an exceptional case. Last August, 1,149 families in Kosrap County began to move out of their old houses in the deep mountains, fleeing poverty.

"From May to July every year, some houses would be submerged by floods washing through the village," Mahrup Murapa says.

Natural disasters including floods and mudslides occurred frequently, damaging the roads that link Kosrap with the outside world. As a result, many villagers had never left the mountains.

As a result, villagers could not get enough food or clothing, not to mention compulsory education, basic medical care and proper housing, according to Ahematjan Kerim, head of Kosrap County.

The only way out of poverty for these people is relocation, and building new homes for them is a key approach for local governments to relieve poverty.

In Karman's village, for example, the local government has built all sorts of infrastructure, including clinics, primary schools, kindergartens and activity centers.

The village has not just tap water and electricity, but also convenient transportation. For the next five years, each villager can get subsidies of 1,500 yuan per month. 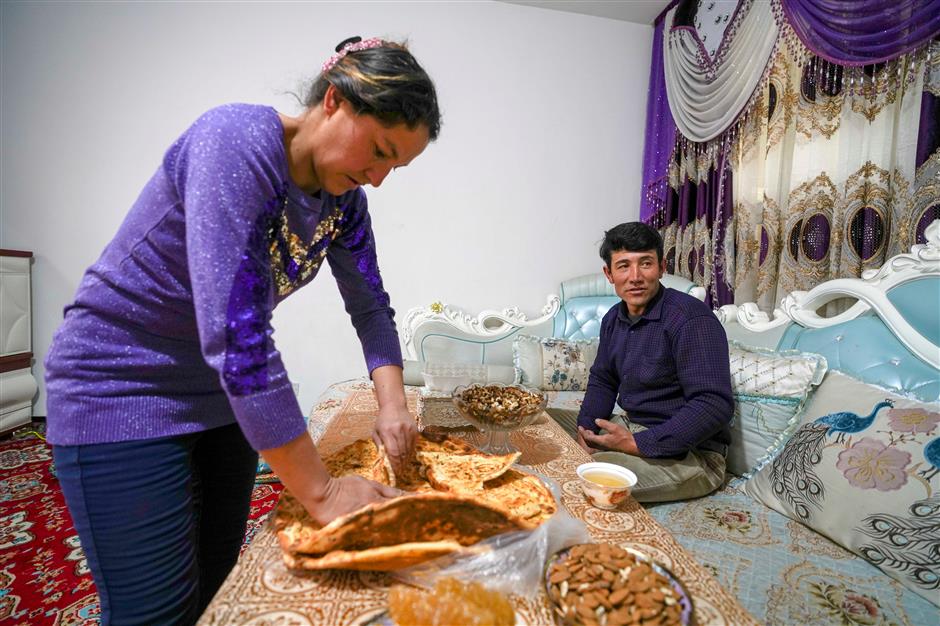 Ranagul Karman (left) prepares breakfast for the family at their new home in the relocation village.

But to remove the potential of people slipping back into poverty, relocation and subsidies are not enough. They need jobs to replace income previously made mainly from herding.

The local government has therefore built factories to employ the herders. These factories started recruiting staff after the Chinese New Year in early February this year.

The government also offers occupational training to the villagers, ensuring the young people have skills to help them find jobs.

Each family in the village gets from the government a 0.33 hectare ration field and a forage base more than twice that size. And they can still access the meadow in the Kunlun Mountains. 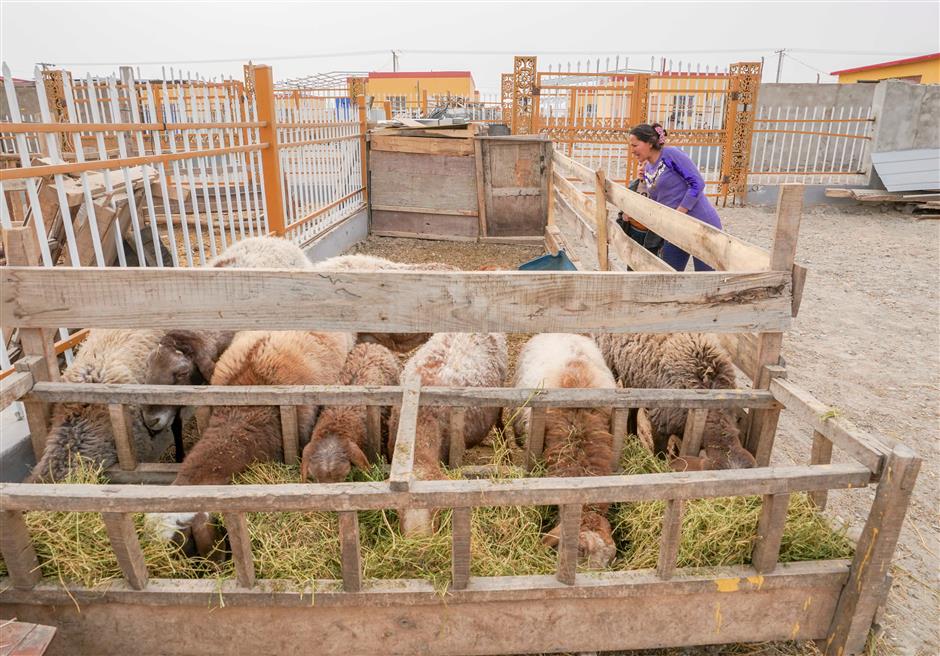 Ranagul Karman feeds the sheep at her new home in the relocation village.

By building relocation sites, promoting industrial development and providing living allowances for impoverished households, Xinjiang has lifted 537,000 people out of poverty in 2018, bringing down poverty in the region to 6.51 percent.

Next year will be critical for China's "war on poverty" as the country has decided to eradicate poverty by 2020, which is also the target year for China to become a moderately prosperous society in all respects.

In 2019, Xinjiang will make every effort to lift another 606,100 people in 12 counties and 976 villages out of poverty, supporting the country's goal of reducing rural poor population by over 10 million this year.

The region will continue building relocation sites and infrastructure and boosting employment. It will also better manage the poverty alleviation funds, making sure that every penny of funds and all poverty alleviation projects actually benefit impoverished households in Xinjiang.

Hopefully, the worries that once plagued Karman and her family will be nothing but a memory for everyone in Xinjiang by the end of this year.

The family of five pose before breakfast at their new home in the relocation village.