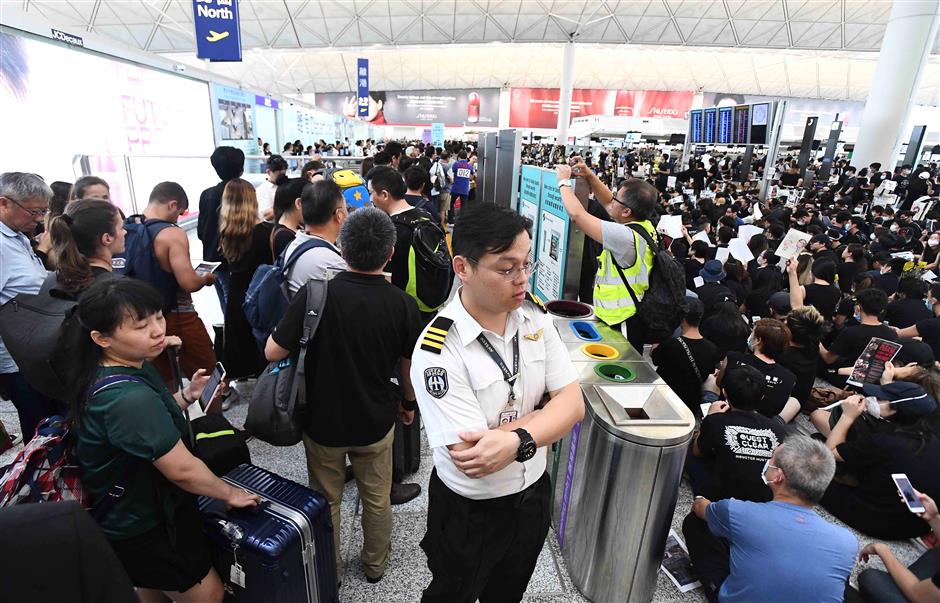 All flights in and out of Hong Kong were canceled yesterday as protesters occupied the Hong Kong International Airport, local airport authority said.

The abrupt shutdown at one of the world’s busiest hubs marked yet another escalation in a 10-week crisis that have roiled the Asian financial hub.

At the same time a Chinese official in Beijing warned signs of “terrorism” were emerging.

Both moves lift the stakes sharply after a weekend of skirmishes between police and activists, in which some protesters even hurled petrol bombs at police, causing injuries of a police officer.

The Airport Authority Hong Kong said it has launched an emergency management center at the airport, one of the busiest airport in the world, and is keeping close contact with airlines to try to resume operation as soon as possible.

“Airport operations at Hong Kong International Airport have been seriously disrupted as a result of the public assembly at the airport today,” it said in a statement.

“Other than the departure flights that have completed the check-in process and the arrival flights that are already heading to Hong Kong, all other flights have been canceled for the rest of today.”

It warned that traffic to the airport was “very congested” and the facility’s car parks were completely full. “All passengers are advised to leave the terminal buildings as soon as possible.”

The airport is the world’s busiest air cargo port and the 8th busiest by passenger traffic, says the Airports Council International, a global association.

China’s aviation authority said on Monday that in light of situation in Hong Kong, it will increase transfer capacity in the Greater Bay Area airports to avoid disruption to trips between the mainland and Hong Kong.

Meanwhile, in Beijing, Yang Guang, a spokesperson for the Hong Kong and Macao Affairs Office of the State Council, said the radicals, who repeatedly attacked police officers with extremely dangerous tools, showed a tendency of resorting to terrorism.

It is a gross trampling on rule of law and order in Hong Kong, a serious threat to residents’ life and safety, and a serious challenge to Hong Kong’s prosperity and stability, Yang said. “We express extreme anger and strong condemnation against such atrocious and reckless acts of severe crime,” said Yang.

The spokesperson also expressed concern for the police injured.

Identifying the police as the backbone of the force safeguarding public security and rule of law in Hong Kong, Yang said for more than two months, Hong Kong police officers have performed their duties with dedication and in accordance with the law, and have shown professionalism and restraint, and made important contributions at the frontline to end violence and chaos.

Such violent crimes should be cracked down upon in accordance with the law and without mercy, he said, stressing that the central government supports Hong Kong law enforcement and judicial agencies to enforce the law and bring offenders to justice as quickly as possible.

“Hong Kong has stood at a critical point. Here I call on all people who care about the future of Hong Kong to step out and say no to all criminal acts and to all violent attackers,” Yang said.

The overriding and most pressing task of Hong Kong at present is to stop violence, end the chaos and restore order, he added.

The Civil Aviation Administration of China said in a statement its deputy director has met Merlin Bingham Swire, CEO of Swire in Beijing. Swire owns a majority stake in Hong Kong’s flag carrier Cathay Pacific Airways, which suspended a pilot charged with rioting and fired two ground staff members for misconduct related to the protests.

Cathay’s chief executive Rupert Hogg warned staff earlier yesterday they could be fired if they participated in, or even supported, “illegal protests.”

“Cathay Pacific Group has a zero tolerance approach to illegal activities,” he wrote in a message sent to the company’s employees.

An official of the Liaison Office of the Central People’s Government in the Hong Kong Special Administrative Region also strongly condemned the radical violent acts of a small number of violent lawbreakers in Hong Kong.