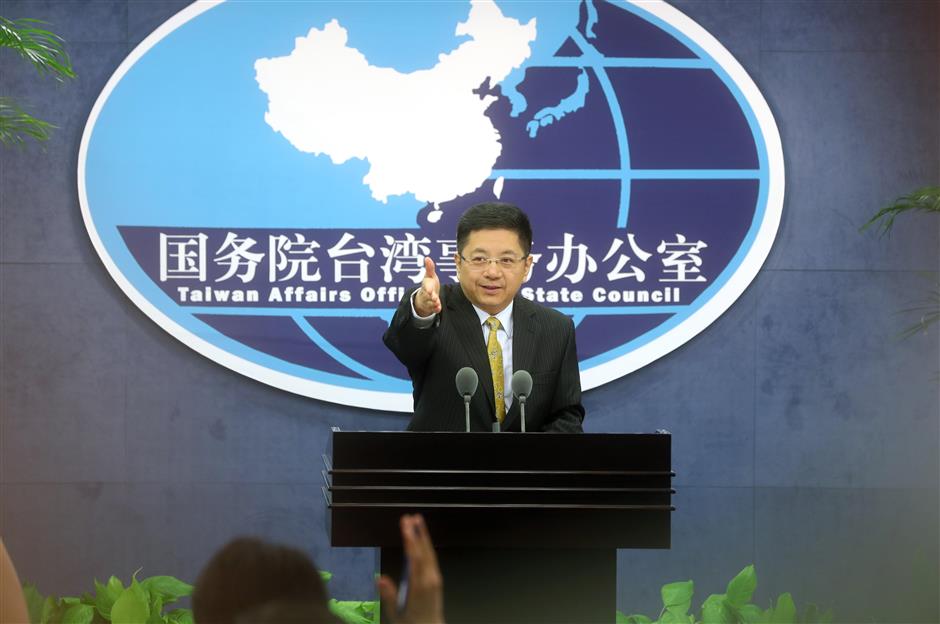 Ma Xiaoguang, a spokesperson for the State Council Taiwan Affairs Office, answers questions during a press conference on Wednesday.

The Chinese mainland is willing to talk with all parties, organizations and personages in Taiwan, which adheres to the one-China principle and opposes “Taiwan independence,” including the New Party, about the peaceful reunification, a mainland spokesperson said yesterday.

Ma Xiaoguang, a spokesperson for the State Council Taiwan Affairs Office, made the remarks in response to a question about a proposal raised by the New Party for the peaceful reunification of the mainland and Taiwan under the “one country, two systems” principle.

“Since its founding, the New Party has been advocating the peaceful reunification of the two sides across the Taiwan Strait, firmly adhered to the one-China principle and opposed ‘Taiwan independence,’ which we highly appreciate,” Ma said.

The proposal was announced at the celebration event of the New Party’s 26th anniversary on August 17.

“Those who play with fire will burn themselves,” he said.

For a period of time now, the DPP authority and “Taiwan independence” forces, acting for their party’s or personal benefit only, have spared no effort in attacking parties, organizations and individuals with different political stances, intimidating and punishing Taiwan people for participating in cross-Strait exchanges on fabricated charges and muzzling critical public opinion, thus creating “green terror” and a “chilling effect,” the spokesperson said.

If their contrived legislation move is allowed to succeed, cross-Strait relations will revert to the era when the “Martial Law” was enacted in Taiwan, and the situation across the Taiwan Strait will return to tension and turbulence, Ma said.

“Taiwan independence” is a dead-end path that will lead to failure, and that it is doomed to fail even faster if they expect to rely on force.

If the Taiwan side upholds the 1992 Consensus and opposes “Taiwan independence,” cross-Strait relations will improve and develop, and the interests of compatriots on the two sides will be safeguarded and enhanced, Ma said.

The Chinese mainland will continue to implement its preferential policies to benefit Taiwan enterprises and compatriots, Ma said.

The preferential policies, also known as “31 measures,” unveiled by the office and the National Development and Reform Commission in February 2018, cover fields of industry, finance and taxation, land use, employment, education and health care, and are aimed at sharing the mainland’s development opportunities with Taiwan.