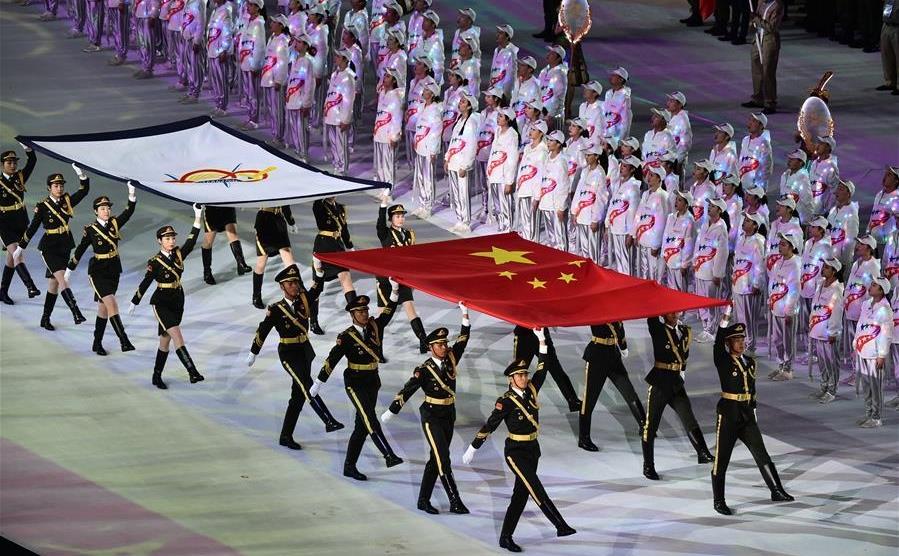 The quadrennial military gala, held in China for the first time, is set to usher in a new era for the event with a couple of record-breaking endeavors.

The International Military Sports Council (CISM) President Herve Piccirillo was present at the opening ceremony and believes the influence the Games to leave will go deep and last long. "I'm full of joy, pride and hope tonight to see so many of you are gathering in Wuhan under the CISM flag," said the Frenchman, who's elected CISM president in April 2018.

"My joy comes from your perfect demonstration of the values cherished and relayed for 70 years in international military sports. Athletes and soldiers share the same values - resilience, courage, team work, military brotherhood, commitment, and loyal service to their nations," explained Piccirillo.

"My pride comes from the scale, influence and excellence of the tournament, which will all be written into the annals of the Games. It's unprecedented to see so many member countries gathering here and it proves they share the CISM's military values and desire to make friends through sport. The Athletes' Village is an example of urban integration and environment friendly, which will surely leave a beneficial legacy.

"My hope comes from the information of fraternity, solidarity, tolerance and friendship we are spreading to the mankind in this world of uncertainty," he added.

International Olympic Committee (IOC) President Thomas Bach also sent a video congratulations to the opening of the Games and wishes it a big success. "By having the best athletes from armed forces of over 100 countries come together in friendship and respect, you are setting a great example of the power of sport to bring together all people in peaceful competition," said Bach.

"In this context, I congratulate CISM under the leadership of Colonel Herve Piccirillo as well as the wonderful Chinese host for making this possible. This event comes at a very special moment for China. It is the 70th anniversary of the People's Republic of China. I would like to congratulate all Chinese people on this great event.

"Always give it your best. Always compete in the Olympics spirit of excellence, respect, and fair play. I wish you much success and a wonderful competition in this great city of Wuhan," added Bach.

Xu Qiliang, president of the 2019 Military World Games organizing committee, expressed his hearty welcome to athletes, coaches and guests, and gave sincere thanks to IOC, CISM and individual sport organizations for their supports.

"We would like to pursue the shared dream of faster, higher and stronger under the guidance of 'sharing friendship, building up peace'," said Xu, who is also the vice chairman of the Central Military Commission of China.

"Let's create the victory, honor and glory belonging to soldiers, get understanding, trust and friendship, and make a splendid, extraordinary and excellent military sports feat, and a celebration of peace," added Xu.

Piccirillo had visited Wuhan many times to inspect preparations for the Games. He was impressed by the accomodation and the sports infrastructure and believes that military athletes from all countries would appreciate the great effort made in the spirit of the Games.`

Piccirillo said here on Thursday that the 2019 Military World Games is poised to usher in a new era for military sport.

"This is a historic first in military sport because nearly 10,000 participants are gathering for 10 days in Wuhan to exchange and share common values," said Piccirillo, who spoke highly of the "organization and popular mobilization" work of Chinese authorities.

The Frenchman believes Wuhan will deliver not only an exceptional games but that the input of China will help attract even more countries to join the military games "family."

Wuhan Games will have the largest number of events and participants ever, with badminton, table tennis, tennis and men's gymnastics included for the first time.

Nearly 10,000 soldiers from 109 countries will compete in a record-high 329 events across 27 sports, including military-specialized aeronautical pentathlon, military pentathlon, naval pentathlon, parachuting and orienteering in the 10-day event.

Among all the athletes, 67 have won world championships, 118 are listed in the top eight in Rio Olympic Games and 43 are defending champions in the five military sports.

This edition marks the first time that the Games have been staged outside the military barracks and the first time all the events are held in one city. It's also the first Games to feature a newly built athletes' village.

The Games will also write another record with defense ministers, military generals and military officers from 42 nations to attend the opening ceremony on Friday. The 5G powered 8K TV and VR system will also be used for the first time.

As the host, China has fielded a record-setting contingent of 553 members in the Games. 406 athletes will compete in 26 sports, absent only in golf.

In the previous six editions, Russia finished atop the medal tally five times while Brazil finished on top once in 2011 as host without the participation of Russia. China registered top three finishes in all the Games.

First held in 1995 in Rome, the Military World Games is a multi-sport event for military personnel organized by the CISM. 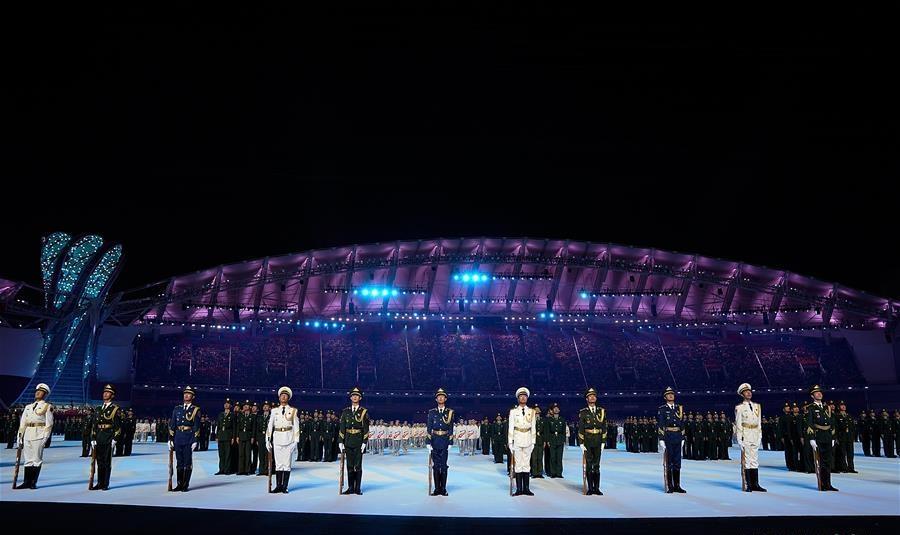 Soldiers and volunteers get ready for the opening ceremony of the 7th CISM Military World Games in Wuhan, capital of central China's Hubei Province on October 18, 2019.