WHO claims epidemic is slowing as new daily cases drop below 2,000 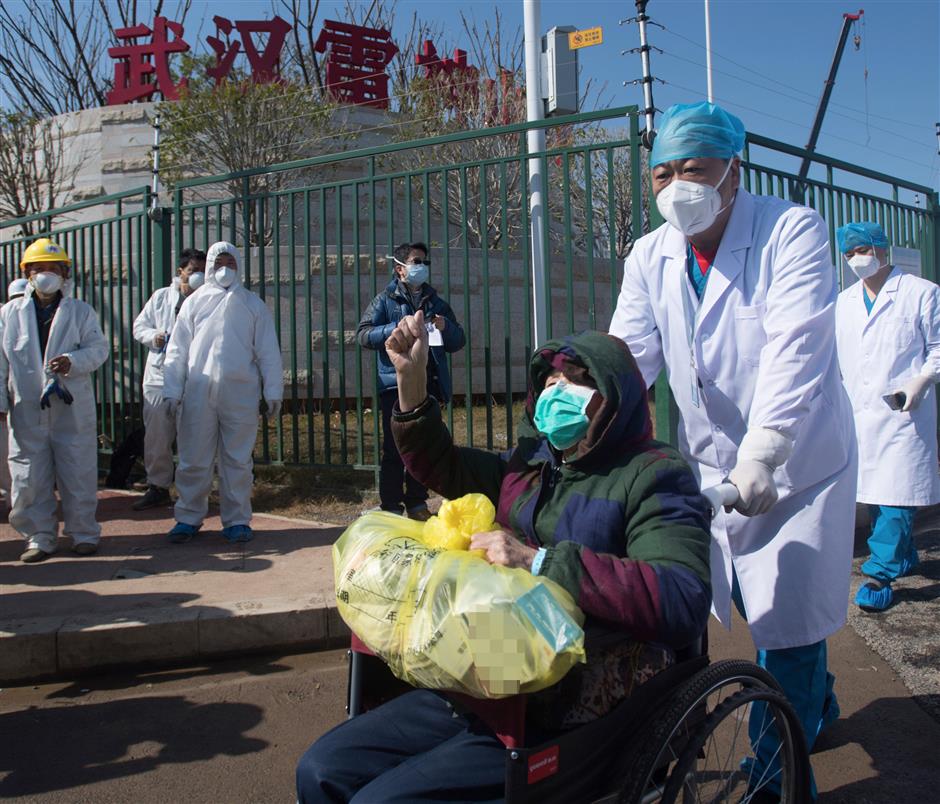 An 83-year-old cured patient gestures as she leaves the Leishenshan (Thunder God Mountain) Hospital in Wuhan, capital of central China’s Hubei Province, yesterday. The elderly lady and a 36-year-old man are the first two cured patients discharged from Leishenshan Hospital, one of two makeshift hospitals built in Wuhan amid the novel coronavirus outbreak. A total of 12,552 patients infected with the novel coronavirus had been discharged from hospitals across China after recovery by the end of Monday, officials said.

China yesterday reported its fewest new infections of coronavirus since January and its fewest deaths for a week, and the World Health Organization said that data suggested the epidemic had slowed.

The head of a leading hospital in Wuhan, central China’s Hubei Province, the epicenter of the coronavirus outbreak, died of the disease yesterday, becoming one of the most prominent victims since the disease first appeared at the end of last year.

Amid the good news, Mi Feng, an official with the National Health Commission, said that China will strengthen the treatment of patients in severe condition and combine traditional Chinese medicine and Western medicine in treatment.

Great efforts will be put into preventing the deterioration of patients from mild symptoms and enhancing the cure rate.

Most people infected by the coronavirus have mild symptoms, with older patients and those with underlying conditions most at risk from the disease, according to a study by Chinese researchers.

A paper published in the Chinese Journal of Epidemiology looked at 72,314 confirmed, suspected, clinically diagnosed, and asymptomatic cases of COVID-19 illness across China as of February 11.

It is the biggest study on novel coronavirus patients since the outbreak began in late December.

Some 80.9 percent of infections are classified as mild, 13.8 percent as severe and only 4.7 percent as critical.

The highest fatality rate is for people aged 80 and older, at 14.8 percent.

The study found that patients with cardiovascular disease are most likely to die of complications from the coronavirus, followed by patients with diabetes, chronic respiratory disease and hypertension.

There were no deaths among children aged up to 9, despite at least two cases of newborn babies infected through their mothers. Up to age 39, the death rate remains low at 0.2 percent.

The overall death rate from the virus stood at 2.3 percent.

Meanwhile, WHO Director-General Tedros Adhanom Ghebreyesus said Chinese data “appear to show a decline in new cases” but any apparent trend “must be interpreted very cautiously.”

“They are very important in enabling WHO to provide good evidence-based advice to countries. We encourage all countries to share their data publicly,” Tedros said.

Zhong Nanshan, a prominent expert with the health commission, told reporters that 85 percent of patients can improve “if they have good life support, treatment conditions, and nutrients.”

He also said that person-to-person transmission of the virus is still happening in Wuhan and urged Wuhan to distinguish healthy people from infected patients.

As more data coming from China depicts a clearer picture of the outbreak, such as how it’s developing and where it could be headed, the COVID-19 is “not as deadly as other coronaviruses, like SARS and MERS,” WHO said.

“This is a very serious outbreak and it has the potential to grow, but we need to balance that in terms of the number of people infected,” said Michael Ryan, head of WHO’s health emergencies program.

“Outside Hubei this epidemic is affecting a very, very tiny, tiny proportion of people.”

Outside China’s mainland, there have been 827 cases in 26 countries and regions and five deaths. More than half of the cases have been on a cruise ship quarantined off Japan.