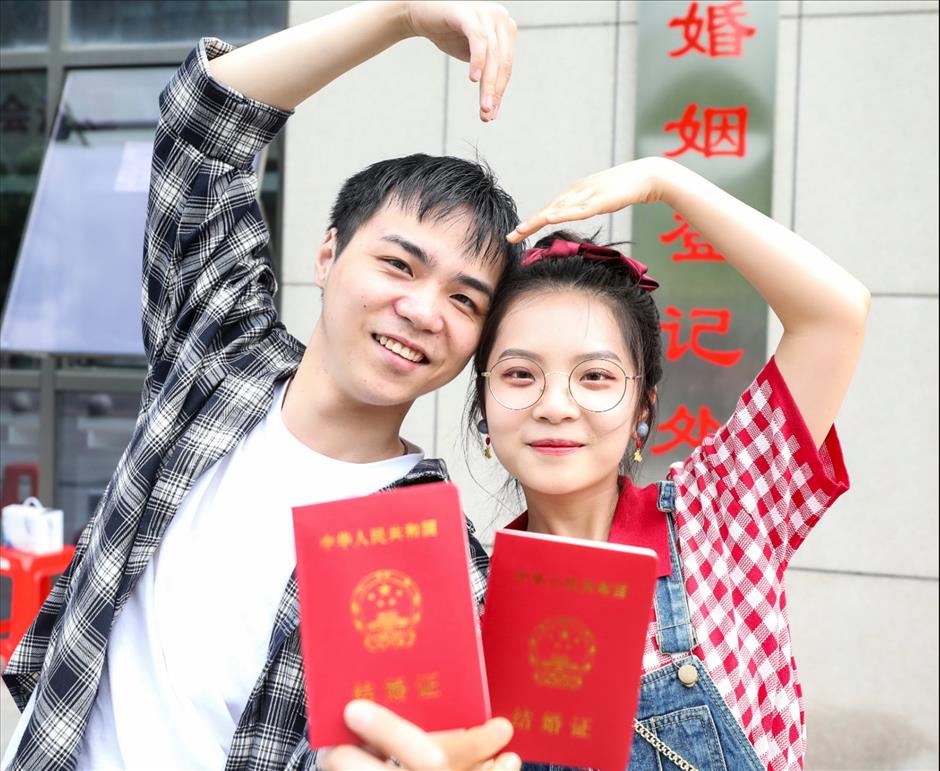 A couple pose after they registered their marriage at a marriage registration office in Huaian City, Jiangsu Province, on May 20, 2020.

The new draft civil code represents a milestone in the development of China's marriage law system, according to law experts.

The draft civil code, which includes general provisions and six parts respectively on property, contracts, personality rights, marriage and family as well as inheritance and torts liability, is scheduled to be submitted to the top legislature's annual session later this week for deliberation.

The first marriage law of the People's Republic of China went into effect 70 years ago. A new version was enacted in 1980 and then amended in 2001.

Since the start of the compilation of the draft civil code, the part on marriage and family law have received great attention from all walks of life.

When the third draft of the part was released in October 2019 to solicit public opinions, 213,634 netizens submitted 276,948 suggestions.

Several improvements, such as those regarding nullification of marriage and the principle of benefiting the adopted person in an adoption, have been made to the draft accordingly, which, the experts said, reflected the philosophy of keeping pace with the times, a solution-oriented approach and the respect for public opinion in China's legislation.

Xia Yinlan, a law professor at China University of Political Science and Law and deputy head of the China Association of Marriage and Family, said China's marriage and family legislation not only reflects social development and progress, but also seeks to promote good values.

One of the key features of the draft is to integrate core socialist values into civil law and vigorously promote social morality and family virtues.

Sun Xianzhong, a researcher at the Institute of Law under the Chinese Academy of Social Sciences, said specifying the legal requirement of "promoting family virtues" in the draft, reflects legislators' respect for moral and ethical rules in marriage and family relations and is conducive to the overall advancement of society.

Experts also suggested further perfection of the draft to better safeguard the rights and interests of people in family relations.