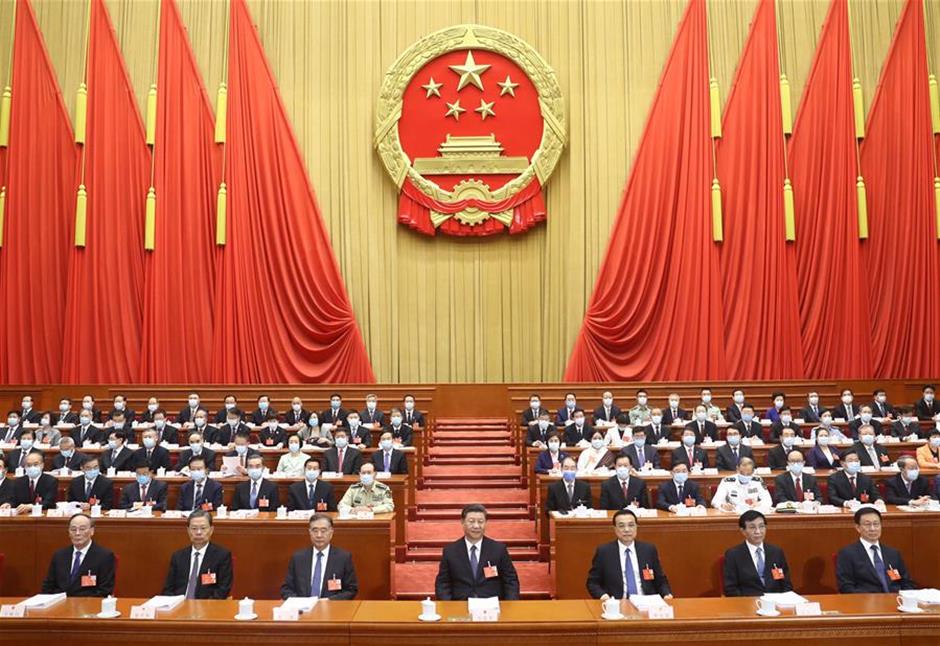 The third session of the 13th National People's Congress opens at the Great Hall of the People in Beijing, capital of China, May 22, 2020. Leaders of the Communist Party of China and the state Xi Jinping, Li Keqiang, Wang Yang, Wang Huning, Zhao Leji, Han Zheng and Wang Qishan on Friday attended the opening meeting of the third session of the 13th NPC, and Li Zhanshu presided over the meeting.

China's national legislature started its annual session Friday morning at the Great Hall of the People in Beijing.

Chinese leaders Xi Jinping, Li Keqiang, Wang Yang, Wang Huning, Zhao Leji, Han Zheng and Wang Qishan attended the opening meeting of the third session of the 13th National People's Congress, which was presided over by Li Zhanshu, executive chairperson of the presidium for the session.

Attendees at the meeting paid a silent tribute to martyrs who died fighting COVID-19 and compatriots who lost their lives in the epidemic.

After the mourning, Premier Li Keqiang delivered a government work report on behalf of the State Council to the legislature for deliberation.

In his report, Li Keqiang said that China faces risks and challenges like never before at present and for some time to come.

China, however, has unique political and institutional strengths, a strong economic foundation, enormous market potential, and hundreds of millions of intelligent and hardworking people, Li said, expressing full confidence in the country's development.

A draft civil code was among the bills and reports submitted to the session for deliberation.

Wang Chen, vice chairman of the NPC Standing Committee, said compiling a civil code that boasts Chinese characteristics, embodies the nature of the times, and reflects the will of the people will provide sound legal guarantees for delivering on the two centenary goals and realizing the Chinese Dream of national rejuvenation.

Wang also explained a draft decision on establishing and improving the legal system and enforcement mechanisms for the Hong Kong Special Administrative Region to safeguard national security, saying that the move will ensure the steady and enduring growth of the cause of "one country, two systems."