Heavy downpours continued to wreak havoc across vast stretches of China yesterday as the country renewed its alert for rainstorms and multiple provincial-regions enhanced flood response.

China’s national observatory yesterday renewed its orange alert, the second-highest, for rainstorms. Heavy rain is forecast to continue until this morning, in large parts of southern China, according to the National Meteorological Center.

Statistics from the China Meteorological Administration on Tuesday showed that the accumulated precipitation since June 1 in east China’s Anhui and Zhejiang provinces, central Hubei Province, and southwestern Chongqing Municipality, is the highest compared with that of the same period since 1961, with the average precipitation in Anhui and Hubei exceeding 500 millimeters.

The NMC also warned yesterday that some areas of the eastern Jiangxi Province will experience downpours, with up to 260mm of daily rainfall.

Jiangxi upgraded its emergency response for flood control from the fourth to the third level as of 10am yesterday. Rains that began on Monday have impacted nearly 399,000 people, the provincial emergency management bureau said.

On Tuesday, Zhejiang raised its flooding emergency response to the top level along the Qiantang River.

In an unprecedented move, the Xin’an River Reservoir, the largest flood control project in eastern China, opened all its nine spillways yesterday morning to release floodwaters. It is the first time that the reservoir has opened all the spillways to discharge floodwaters since it finished construction in 1959.

In Hubei, a landslide caused by heavy rainfall swept away nine people in Huangmei County yesterday, which suffered a precipitation exceeding 200mm.

In Anhui, local authorities raised the emergency response for flood prevention from the third level to second from Tuesday noon as waters of multiple rivers exceeded warning levels.

Severe flooding caused by torrential rain disrupted the college entrance examination in Shexian County on Tuesday, as most of the 2,000-plus students were unable to reach their exam sites on time.

The students took the examinations yesterday as normal and provincial education authority said the exams on Chinese language and math originally scheduled on Tuesday will be rescheduled today. 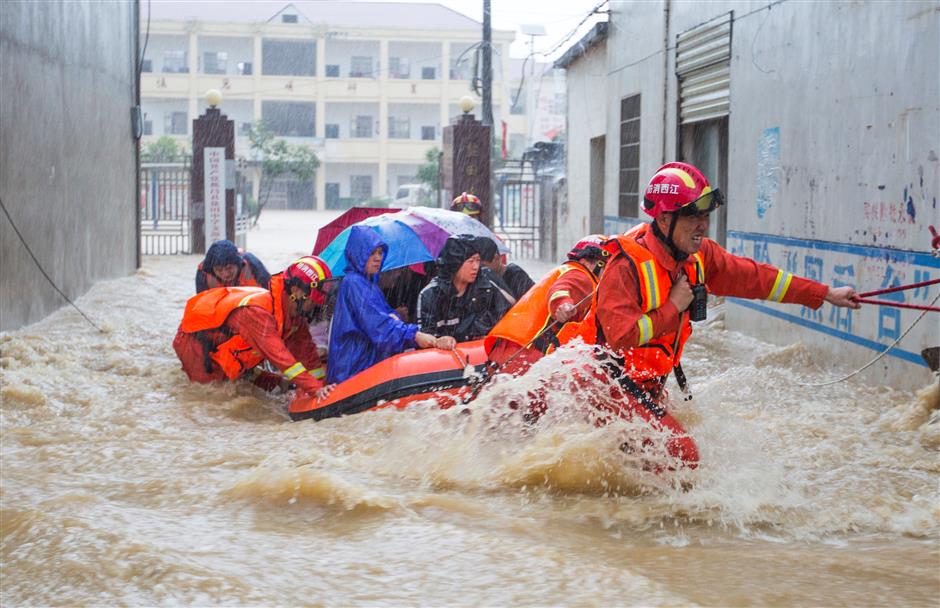 Rescue workers brave the rain and floods to transfer students from Yantian middle school in Jiujiang City, east China’s Jiangxi Province, yesterday. Jiangxi upgraded its emergency response for flood control from the fourth to the third level as of 10am yesterday.