China-US ties should not be hijacked by suspicion, fear, hatred: ambassador 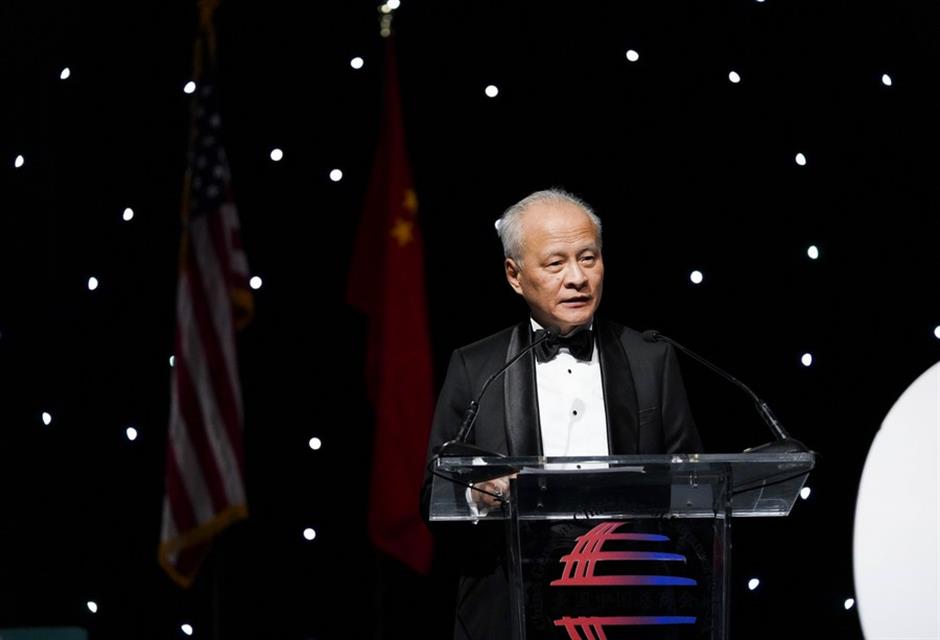 Cui Tiankai, the Chinese ambassador to the United States, addresses the 15th anniversary and Chinese Lunar New Year gala of China General Chamber of Commerce-USA in New York, the United States on January 8, 2020.

The key to a more stable and stronger US-China relationship is to identify growing common interests, properly manage any differences between the two countries, and "not allow suspicion, fear, or even hatred to hijack our foreign policy," Chinese Ambassador to the United States Cui Tiankai has said.

"For us, President Trump is President of the United States elected by the American people. So we are ready to work with him and his administration to build a more stable and stronger relation between our two great countries," Cui said in an exclusive interview with Fareed Zakaria, host of CNN's GPS Show, which was aired on Sunday.

"Of course, any US leaders, any US administration would represent US interests. The same is true for Chinese leaders and the Chinese government," Cui said in response to questions on US-China ties. "But the key is to identify our growing common interests, areas where our two countries can really work together for the common interests of the two peoples and for the broader common interests of the international community."

At the same time, "we have to do a good job in managing any possible differences between us in a constructive way. That's been our approach all along," he added.

"I think as great powers, big countries with heavy responsibilities not only for ourselves but also for the world, we really have to base our policies on a good perception of the common interests, on growing global challenges and how the international community would expect us to do, and not allow suspicion, fear, or even hatred to hijack our foreign policy," he said.

He noted that people have to "fully recognize the realities of today's world."

"This has never changed, whether in the last 70 years or in the last seven years. This is a continuing process. We certainly have the legitimate right to build our country into a modernized, strong, prosperous country, like every other country in the world," he said.