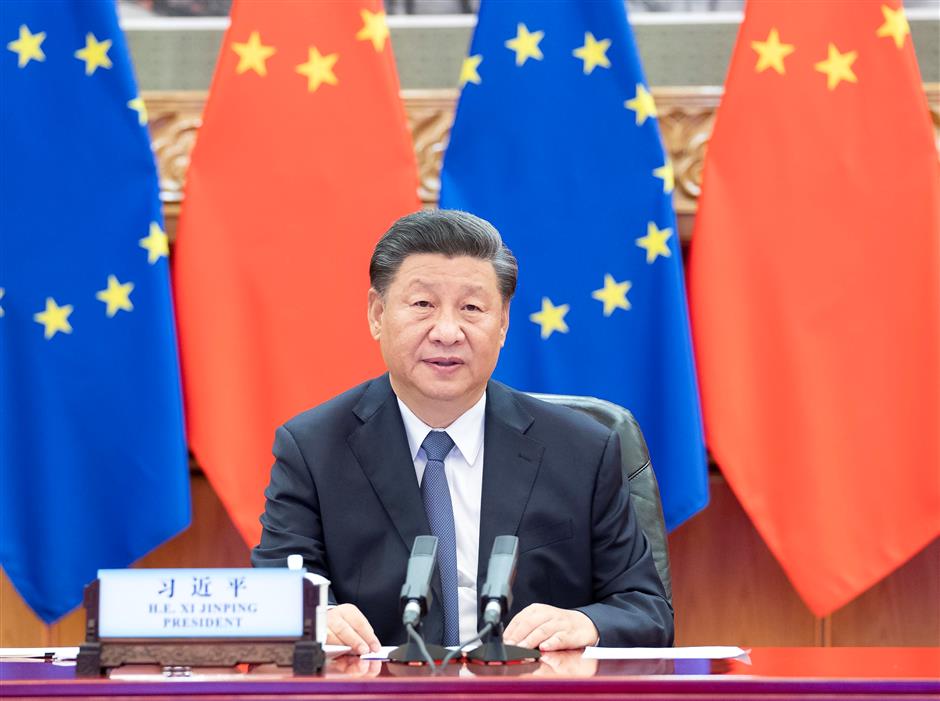 Leaders of China, Germany and European Union on Monday agreed to strengthen communication and cooperation to ensure the success of the upcoming series of major political agenda between China and the EU, enhance mutual trust, seek mutual benefits on a win-win basis and uphold multilateralism, vowing to bring the ties up to a higher level.

The leaders announced the official signing of the China-EU agreement on geographical indications, stated their commitment to speeding up the negotiations of the China-EU Bilateral Investment Treaty to achieve the goal of concluding the negotiations within this year, decided to establish a China-EU High Level Environment and Climate Dialogue and a China-EU High Level Digital Cooperation Dialogue, and to forge China-EU green and digital partnerships.

Xi pointed out the COVID-19 pandemic is accelerating changes unseen in a century, and mankind is standing at a new crossroad faced with multiple common challenges. It is only more imperative for China and the EU, as two major forces, markets and civilizations, to firmly grasp the general trend of mutual support and united cooperation in face of such situations, unswervingly promote the sound and stable development of the China-EU comprehensive strategic partnership, to inject more positive energy into COVID-19 response efforts, economic recovery and championing justice, Xi said.

First, China and the EU should adhere to peaceful coexistence. As there are no identical political systems in the world, the coexistence of multiple civilizations represents the normalcy. "The more firm the strength underpinning China-EU peaceful coexistence, the more guaranteed the world peace and prosperity," Xi said.

Second, China and the EU should adhere to openness and cooperation. China is working toward the goal of fostering a new, dual-cycle development architecture with the domestic cycle as the mainstay and with domestic and international development reinforcing each other. "China will seek better interconnectivity and effectiveness between the two markets and resources on the two sides, to promote common development in a more robust and sustainable way," said Xi.

Third, China and the EU should adhere to multilateralism. Xi stressed China is ready to work with the EU to step up dialogue and coordination at bilateral, regional and global levels, stay committed to a global governance outlook featuring consultation, contribution and shared benefit, defend the international order and system with the United Nations at the core, promote the political settlements of international and regional hot-spot issues.

Fourth, China and the EU should adhere to dialogue and consultation. "China and the EU need to stay committed to the mainstream of cooperation, resolve misunderstanding through dialogue, overcome difficulties through development and properly manage differences."

Noting China and Europe are important trade and investment partners to each other, Xi said the two sides should step up macro-policy coordination, take more measures and unleash more cooperation opportunities.

Noting the agreement on GI was officially signed on Monday, Xi said the two sides should adopt a positive and pragmatic attitude, speed up negotiations on the China-EU investment agreement to achieve the goal of completing the negotiations by the end of this year, working to upgrade cooperation, facilitate the post-epidemic world economic recovery and jointly safeguard an open trade and investment environment.

"The two sides should forge China-EU green partnerships," Xi said, adding that the two sides need to participate constructively in the global multilateral process of tackling climate change and protecting global biodiversity, support each other in running the UN Climate Change Conference in Glasgow next year and promoting the 15th Conference of the Parties of the convention on biodiversity in Kunming to achieve positive results, and contribute to global sustainable development.

The two sides need to forge China-EU digital partnerships, Xi said, adding that China has put forward its global initiative on data security, and hopes that the EU will work with China to formulate standards and rules of the global digital field and promote the sound development of global governance in digital economy.

Xi expressed the hope that the EU will keep its trade and investment market open, foster an open, fair, just and non-discriminatory business environment and protect the legitimate rights and interests of Chinese companies.

Since the outbreak of COVID-19, China and the EU have maintained close contacts in anti-pandemic and global health cooperation, demonstrating the significance and global impact of China-EU relations, Xi said.

For the next step, the two sides should strengthen macroeconomic policy coordination and cooperation, maintain the stability of the global industrial chain and supply chain, and jointly promote the recovery of the world economy, Xi said.

Xi called for strengthening vaccine research and development cooperation, to strive for making vaccines universally available global public goods, and fully accommodate the availability and affordability of the vaccines in developing countries.

Personnel exchanges must be resumed in an orderly manner, and the cross-border movement of goods should be facilitated, Xi said.

Xi urged actively carrying out tripartite cooperation with Africa on the basis of full respect for African countries' will, calling on the international community, especially multilateral financial institutions and commercial creditors, to take stronger actions on debt relief in Africa.

Xi also clarified China's principled position on Hong Kong-related and Xinjiang-related issues, saying that the essence of the issues is to safeguard China's national sovereignty, security and unity, and to protect the rights of people of all ethnic groups to live and work in peace.

"China firmly opposes any person or force creating instability, division and chaos in China, and meddling in China's internal affairs by any country," Xi stressed.

"There is no one-size-fits-all path to human rights development in the world. There is no best way, only the better one," Xi stressed, adding that countries should priorly handle their own things.

Chinese people will not accept "an instructor" on human rights and oppose "double standards". China is willing to strengthen exchanges with the European side based on the principle of mutual respect so that the two sides can both make progress, said Xi.

For their parts, Merkel, Michel and von der Leyen said China is an important strategic partner respected by the EU. It is imperative for Europe and China to strengthen cooperation, jointly safeguard multilateralism, resist unilateralism and protectionism, and respond more effectively to various global challenges, which is in line with the common interests of both Europe and China and the international community.

The EU is willing to work with China to strengthen dialogue, promote mutual trust, and push cooperation in the fields including economy and trade, investment, green economy, climate change, biodiversity, and sustainable development for more achievements.

The European side was encouraged by the signing of the agreement on GI, welcomed China relaxing market access restrictions, expanding opening up, pledging to concluding the EU-China investment agreement negotiations within this year to inject new impetus into EU-China relations.

The European side is willing to strengthen cooperation with China in international organizations, promote anti-pandemic international cooperation, maintain free trade, and promote the economic recovery in Europe, China as well as the world at an early date.

On the human rights issue, the European side admitted its problems and expressed the hope to conduct dialogue with China based on the principles of equality and mutual respect to enhance mutual understanding and handle their differences properly.