On a flight to nowhere! HK airline fighting back 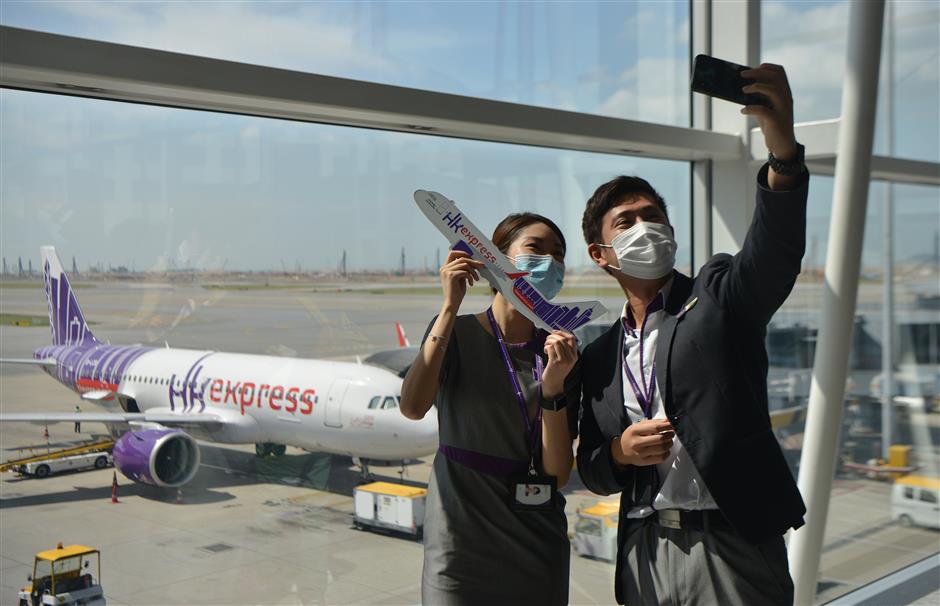 Flight attendants take photos ahead of the inaugural “Flight to Nowhere” by budget carrier HK Express as part of a controversial “Flycation” flight around Hong Kong yesterday.

But it sparked criticism from environmentalists.

Owned by Cathay Pacific, HK Express had been grounded for months because of the coronavirus pandemic that has killed and infected millions of people around the world and brought international travel almost to a halt.

With the global aviation industry in deep crisis, several carriers — including some in Australia, Japan and China’s Taiwan — have been offering short flights that start and end at the same airport to raise cash.

But the HK carrier described the flight as a refresher for when travel restarts in earnest after global travel restrictions are eased.

“You can see this as a warm-up exercise for passengers to get ready for the new normal,” said HK Express public relations officer Iris Ho.

“Passengers have not been flying for so long.

“And we want to educate them with our preventive measures and new arrangements on board.”

HK Express said it would offer three “nowhere” flights in November at a price of HK$388 (US$50) — considerably cheaper than similar sightseeing flights by other airlines.

Tickets have already sold out. Passengers will be seated apart to employ social distancing. No food will be provided and all magazines are taken away.

He said they only do harm to the environment.

“These flights serve no actual purpose but only waste energy,” he said.

They run in the oppostite direction of environmental protection,” Ng said.

He called for the airline to call off the future flights.

Singapore Airlines ditched a similar idea after an outcry over the environmental impact.