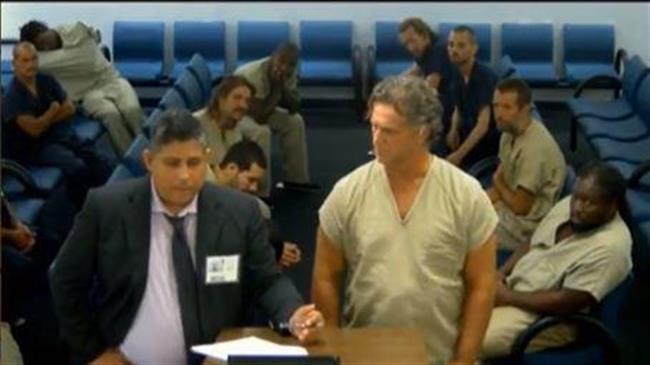 A convicted drug trafficker is accused of stalking nearly a dozen judges in one Florida county by making obscene phone calls and sending letters in which he threatened to be their "biggest nightmare."

Investigators said Watson was sentenced in Broward Circuit Court in 2011 to six years in prison. Watson began stalking and harassing judges after his release in March, according to a 39-page complaint.

The complaint says he called a Jewish judge "Hitler" and an African-American judge "Uncle Tom."

"I pretty much have never seen somebody so dangerous, reckless and relentless in my entire life," Broward Sheriff's Detective Joseph Kessling said during Watson's first appearance hearing. "He's made it perfectly clear that he's a nightmare, he's free, he's not going away and he is not going to stop."

Six judges were initially targeted, according to the complaint.

In a letter to one judge, Watson wrote: "I'm sick and tired of the last eight years of my life being negatively impacted by lowlife scumbags such as yourself."

Watson also has visited some of the judges in the courthouse. On April 18, he knocked on the locked door of one judge's chambers and tried to barge in when an assistant answered. The judge pushed a panic button and deputies responded.

A second group of five judges was contacted Sunday.

"I have judges that are literally afraid to go out into the halls," Kessling said in court. "The judges, their wives, their children ... they're live in fear pretty much on a daily basis."

Prosecutor Eric Linder noted that some of the judges who've been stalked were not involved in Watson's case, including three who weren't even judges when he was convicted.

"Every judge in Broward County is a potential target" Linder said.