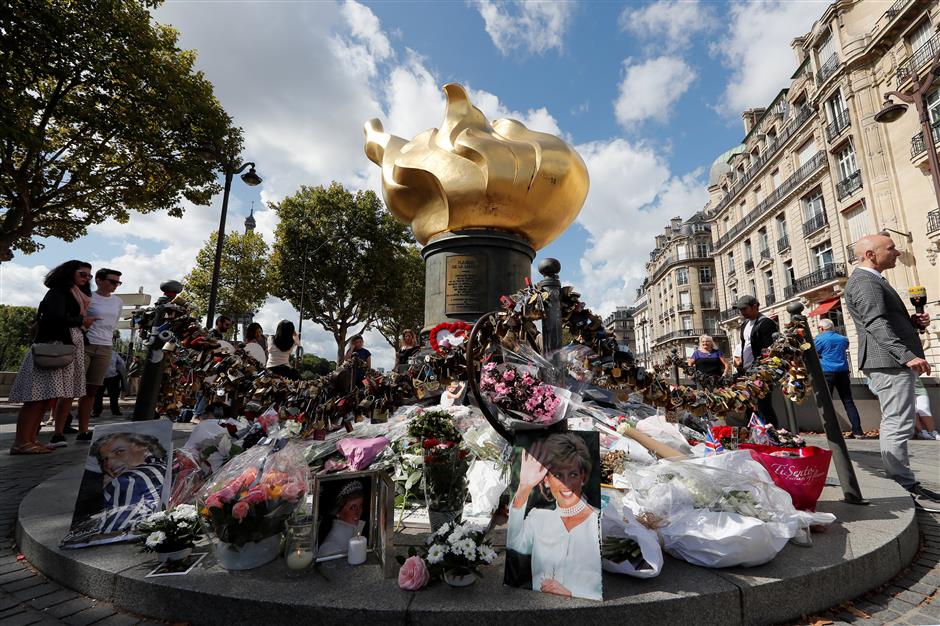 People gather around the Liberty Flame monument at the Place de l'Alma, above the underpass where Diana Princess of Wales died in a car accident on August 31, 1997, in Paris, France, August 31, 2017.

Fans and friends of Diana, princess of Wales, were marking 20 years since her death yesterday as Britain looked back on the day when the shocking news broke that she had been killed in a Paris car crash.

She was just 36 at the time, with her death triggering an unprecedented outpouring of grief across Britain.

She died along with Dodi Fayed, her wealthy Egyptian boyfriend of two months, and his driver Henri Paul who was trying to shake off paparazzi photographers.

Two decades on, Britain has still not forgotten.

“20 years ago today, the world lost an angel,” pop star Elton John, a friend of Diana’s who worked with her to raise awareness about AIDS, said on Instagram next to a picture of the two of them.

Well-wishers laid flowers and candles outside Kensington Palace, her London residence where her sons Princes William and Harry now live.

A couple in Union Jack clothing were the first to arrive yesterday morning at the palace gates and hundreds filed past during the day.

“I don’t think there’s anyone else like her now, she was a one off... She was electric, she was just dynamite,” said Ian, a receptionist from Hertfordshire, north of London, and one of those who came to pay their respects.

Overnight, a handful of people had braved the rain in Paris to visit the Pont de l’Alma tunnel where her car smashed into a pillar at 12:23am on August 31, 1997, ending the life of the world’s most famous woman.

Diana was “revolutionary,” said Sian Croston, a 17-year-old student from London who was visiting the gold-leaf Flame of Liberty monument that stands above the underpass and has become something of a shrine to the princess.

“She changed the royal family forever. She will always be the people’s princess,” she said, using an epithet coined at the time by prime minister Tony Blair.

Linda Bigelbach, a 61-year-old US tourist from Minnesota, recalled: “I remember her wedding day and I remember the day she died.”

In London, William and Harry, who were 15 and 12 respectively when she died, were spending the day privately after greeting well-wishers outside the palace on Wednesday.

Earlier in the day, they had walked through the White Garden, a space within the palace grounds created this year to evoke memories of Diana’s image and style.

They also met with representatives of the charities she supported, including those helping AIDS sufferers and children in need.

Speaking to one group, Harry said his mother’s death had affected everyone.

The flowers piled up in front of the palace alongside heartfelt handwritten messages and photos remembering Diana, with the two brothers placing bouquets handed to them by several members of the public.