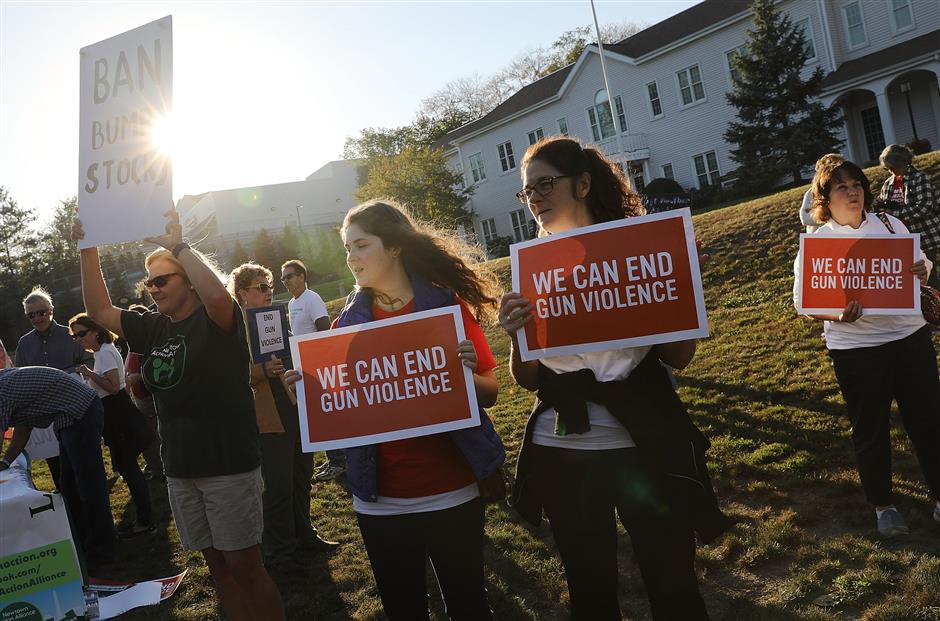 Dozens of people attend a vigil remembering the 58 people killed in Sunday's shooting in Las Vegas and calling for action against guns on October 4, 2017 in Newtown, Connecticut.

The most prominent U.S. gun lobby group on Thursday said it agrees to placing restriction on a device that accelerates gunfire, after a version of it was discovered in the arsenal of Las Vegas killer Stephen Paddock, who was behind the deadliest mass shooting in modern U.S. history.

The National Rifle Association (NRA) said in a statement that it agrees to tighter control of "bump stocks", which are used to replace a rifle's standard stock to give a semi-automatic rifle the rapid firing speed of a machine gun.

"The NRA is calling on the Bureau of Alcohol, Tobacco, Firearms and Explosives to immediately review whether these devices comply with federal law," the statement said.

U.S. federal law bans private citizens from owning automatic firearm manufactured after 1986, and requires a special license to own any made before that date. However, bump stocks, which boost the fire power of a semi-automatic rifle, are not banned.

A comparison by The New York Times said while automatic rifles can fire 98 shots in seven seconds, in the Las Vegas shooting, semi-automatic rifles used with a bump stock fired 90 shots in 10 seconds.

In 2016 another deadly mass shooter on a rampage, Omar Mateen, used a semi-automatic rifle to open fire at a night club in Orlando. He fired 24 shots in 9 seconds, killing 49 people.

As the NRA released the statement, multiple conservative lawmakers and the White House said they are willing to look into legislation to restrict the device.

"We think we should have that conversation, and we want to be part of it moving forward," White House Press Secretary Sarah Sanders said in a press briefing Thursday.

But despite its approval for anti-bump stock regulation, the NRA said "banning guns from law-abiding Americans based on the criminal act of a mad man will do nothing to prevent future attacks."

This, it added, "has been proven time and again in countries across the world."

At least 59 people were killed and 527 others wounded after Paddock opened fire Sunday on an open-air concert in Las Vegas in the U.S. state of Nevada.