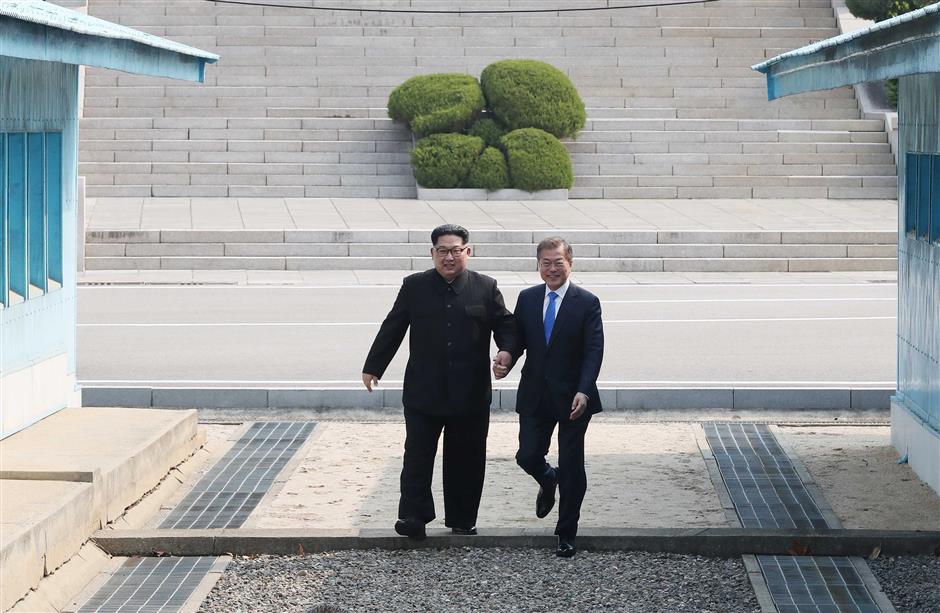 DPRK leader Kim Jong Un (left) steps with South Korea's President Moon Jae-in across the Military Demarcation Line that divides their countries ahead of their meeting at the official summit Peace House building at Panmunjom on April 27, 2018.

It was a historic handshake that Koreans had waited more than a decade to see – and it sparked a completely unscripted dance with the two leaders hopping back and forth over the border that divides their nations.

Everything about the inter-Korean summit had been minutely choreographed and rehearsed but Kim Jong Un, leader of the Democratic People's Republic of Korea, went off-script when he invited Moon Jae-in to join him over the border.

After a prolonged clasp lasting almost half a minute over the Military Demarcation Line that acts as the border, a beaming Moon invited his guest over to South Korea.

They posed for pictures as Kim became the first DPRK leader to set foot in the country since the Korean War ended in 1953.

DPRK leader Kim Jong Un beckoned South Korean President Moon Jae-in over to the other side.

Kim then beckoned Moon over to the other side. Moon seemed initially hesitant but the jovial young leader was not taking "no" for an answer, grabbing his hand and accompanying him across the border before they warmly shook hands again.

Grinning broadly, the pair then crossed back to the South hand-in-hand, in a remarkable image of unity. 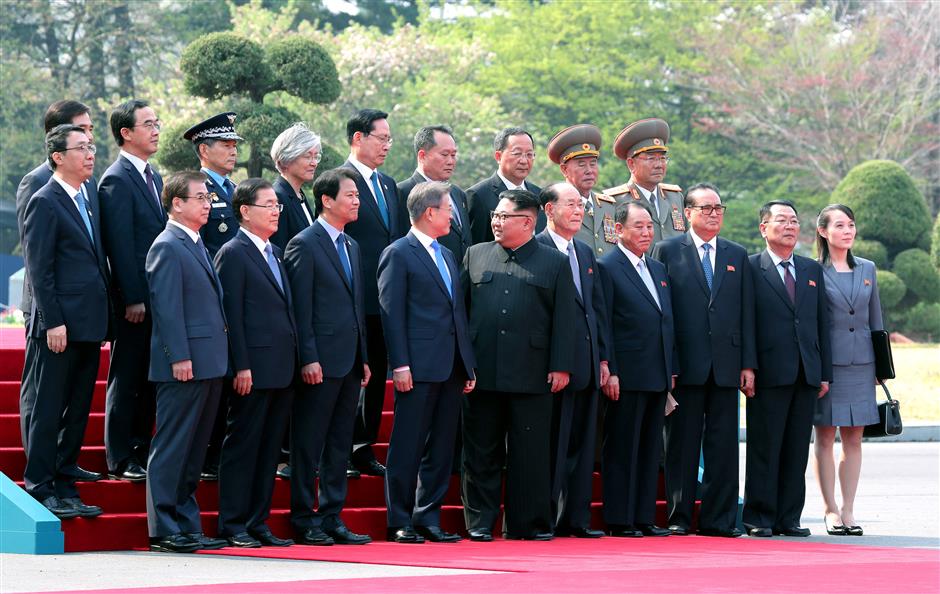 DPRK leader Kim Jong Un (center right) and South Korea's President Moon Jae-in (centre left) prepare to pose for a photo with representatives from both sides during an official ceremony ahead of their meeting at Panmunjom on April 27, 2018.

It all went to show that even for a moment as carefully planned, the best-laid preparations rarely run totally to schedule.

South Korean officials had carried out a full dress rehearsal on the eve of the summit, including stand-ins for the two leaders.

"We examined every single detail including lighting and flower decorations," a Moon spokesman said.

The welcoming ceremony dripped with symbolism as the two men walked down a red carpet through an honour guard of South Korean soldiers colorfully dressed in traditional uniform lifting up banners as they went through.

They were also greeted by a military band, Moon saluting and Kim standing rather awkwardly not quite to attention, the first DPRK leader to inspect an honor guard from the South.

The pair seemed to share several relaxed moments, with Kim at one point breaking into a laugh as Moon pointed something out with a gesture during the ceremony, and the visitor from Pyongyang joking about noodles during his summit opening remarks as his sister and close adviser Kim Yo Jong took notes.

There were also moments of unexpected comedy as Yo Jong and another delegation member following the two leaders realized they were in shot and wildly swerved off to the side.

And the live TV pictures of the two leaders inspecting a picture of Mount Kumgang in DPRK were obstructed by a photographer standing in the way.

There was some awkwardness too as Kim took an age to sign the guest book, with Moon standing by seemingly not knowing where to look.

But also brief moments of tenderness, with Moon several times gently guiding his guest with a light hand on the back.